Twice as expensive as the Mistral. Two universal landing ships for the Russian Navy 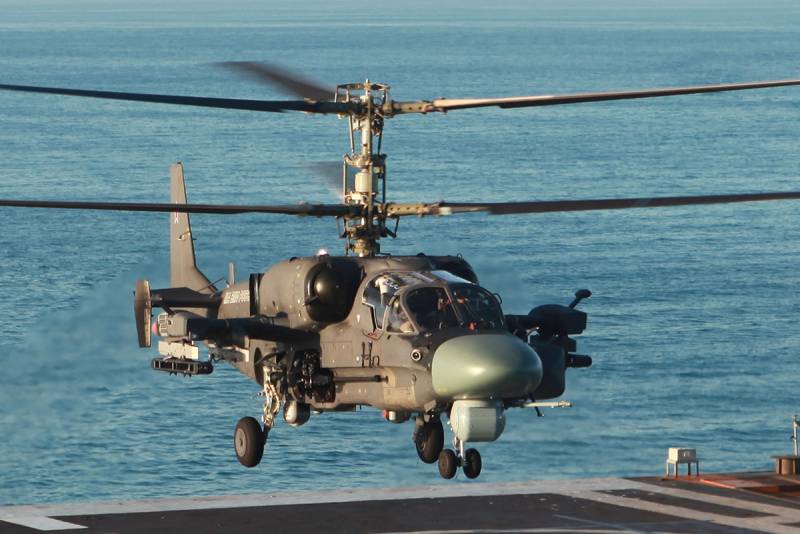 On May 22, TASS announced the conclusion of a contract between the Russian Ministry of Defense and the Zaliv shipyard (Kerch) for the construction of two UDCs for the Russian Navy in the amount of approximately 100 billion rubles. For domestic fleet universal landing ships - a new project. In the USSR, and then in Russia, ships of this class were not built. At the same time, there was experience in creating large helicopter carriers in the Soviet Union, but these were anti-submarine cruisers, the main task of which was the fight against enemy submarines.

According to TASS, the Russian Ministry of Defense signed a contract with the Zaliv shipyard in Kerch for the construction of the first two universal landing ships (UDC) for the Russian fleet. The total cost of the contract is estimated at about 100 billion rubles, sources in the Russian defense industry told reporters about this. According to the interlocutors of the agency, the laying of the ships should take place in the coming weeks. Consequently, with a high degree of probability we can say that this will happen in the summer of 2020.

Back in 2019, the Russian press discussed information that the head UDC should be transferred to the fleet in 2025, and both ships should be ready before 2027. At the same time, the official dates for the laying and delivery of ships are not known. At the same time, the TASS report itself says that the agency does not have official confirmation of information about the contract, and the press service of the Zaliv shipbuilding company was told reporters that they are ready to build landing helicopter carriers for the Russian fleet, but noted that they do not have information about the deal. 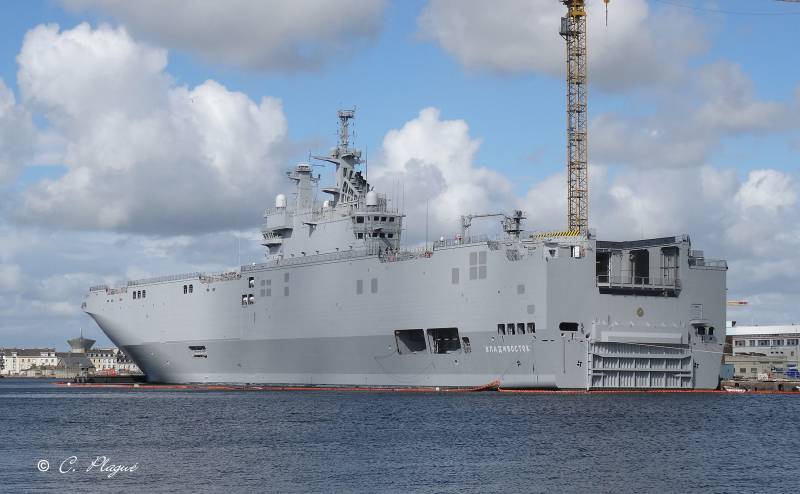 A contract signed in June 2011 with France for the construction of the Mistral universal landing helicopter carrier ship was estimated at 1-1,2 billion euros. At the same time, it is known for certain that for breaking the contract France returned 949 million 754 thousand euros to Russia, as well as Russian equipment installed on the ships. In any case, at the time of the conclusion of the contract in 2011, the purchase of Mistral cost the Russian budget approximately 41-49 billion rubles at the then exchange rate (the average exchange rate for 2011 was 40,9 rubles per euro).

Two new UDCs of Russian construction will cost taxpayers already 100 billion rubles, that is, at least twice as much. At the same time, the ruble, of course, seriously depreciated against the euro and the dollar after 2014, but the cost of the ships still increased markedly. At the current rate, this is already 1,317 billion euros (the average rate for 2020 is 75,9 rubles per euro). At the same time, experts note that the externally presented ships resemble the Mistral, although they have grown slightly in size. In any case, it is impossible to compare projects face-to-face at this stage, since the new Russian UDCs are likely to be larger than the French ones, plus it is not known what equipment and weapons will be installed on board the ships. However, the price is still alarming. Especially considering the fact that the ships are planned to be built not in France, but in Russia. With the involvement of workers with Russian, not French salaries, and with the use of Russian materials and components, which, it would seem, do not need to be purchased for currency.

What is known about the project of the new UDC

Little is known about the draft of the new UDC. Earlier in the press, the draft of the Russian UDC “Priboy”, developed by specialists of the Nevsky Design Bureau, was widely discussed, but now we are talking about another project. According to the bmpd specialized military blog, which is published under the auspices of the Center for Analysis of Strategies and Technologies, this is about project 23900, which was developed by employees of the Zelenodolsk Design Bureau, which is part of the Ak-Bars shipbuilding corporation.

The first materials and images of the UDC of project 23900 appeared in early January 2020, after the Zvezda TV channel released news the plot of Putin's visit to Sevastopol. Here, on January 9, the Russian president visited an exposition dedicated to the development prospects of the Russian Navy. The exposition was deployed in the building of the Black Sea Higher Naval Order of the Red Star of the Nakhimov School. Within the framework of the exhibition in Sevastopol, the enterprises of the military-industrial complex of Russia presented their promising developments, among which warships occupied a special place. 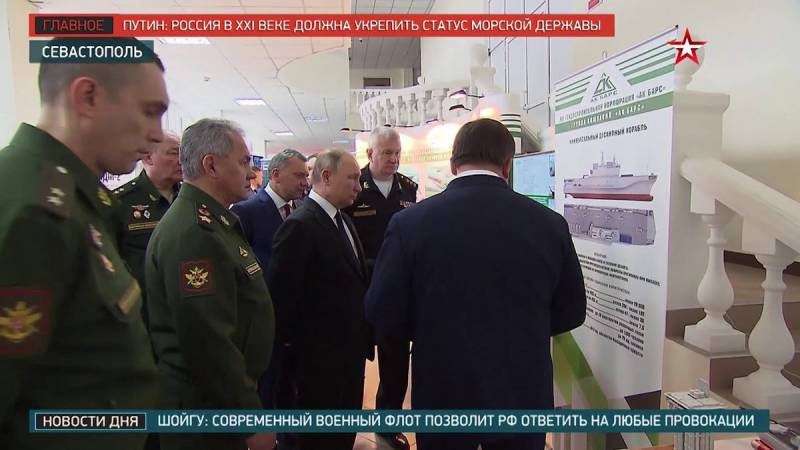 Shot from the TV channel "Star"
According to experts, the presented images of the UDC of project 23900 allow us to talk about the significant external similarity of this project with the French Mistrals. The bmpd blog explicitly called the project “largely a clone” of the French UDC. The ships are really very similar in appearance and, apparently, have a similar architecture and layout of the internal landing decks. In this case, the Russian version came out wider than its French counterpart, which was reflected in the displacement and increased capacity of the ship.

Certain questions are caused by the choice of a design company. The development and construction of UDC in Russia and the USSR have never been involved. But the real experience in creating large warships, the same heavy aircraft-carrying cruisers of Project 1143, was with the Nevsky Design Bureau. However, it was not they or another Petersburg company, the Krylov State Scientific Center, who were responsible for the development of the UDC, but the Zelenodolsk Design Bureau. The company, of course, is successful, but has won a place under the sun with projects of small missile ships: Buyanov and Cheetahs. Previously, the company did not design warships larger than the Cheetahs, the displacement of which is less than 2000 tons.

It is obvious that Russia, to some extent, became the owner of the technology and design documentation on Mistral, which makes it possible to design ships even with the help of specialists from the corporation, which used to supply numerous patrol and small missile ships for export and for domestic use with good quality . Specialists also include advanced technologies mastered here in the design bureau from Zelenodolsk. It was the enterprise from Tatarstan that was the first in the industry to introduce a software and hardware complex of virtual prototyping. Thanks to this complex, designers and customers even before the start of construction can walk through the interior of the future warship in 3D glasses, evaluating how the project will look like already at the construction and commissioning stage.

Technical characteristics of the new UDC

The most interesting is the technical characteristics of the new UDC. The longest ship is 204 meters wide and 38 meters wide. Thus, the Russian version is slightly longer than the “Frenchman”, but noticeably wider - by 6 meters. It is no coincidence that the ship has a large total displacement, which is estimated at about 25 thousand tons; for Mistral, the total displacement was 21 tons. The draft of the ship will be approximately 300 meters, which is more than a meter higher than the similar parameter of the "French", who never reached the Russian coast. 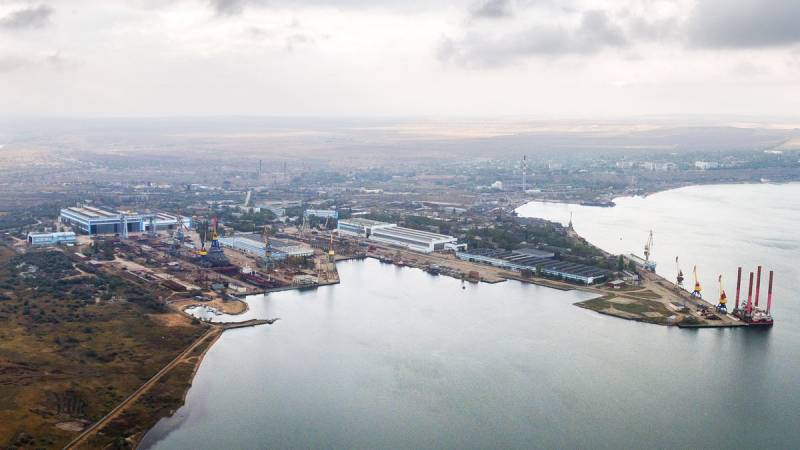 Shipyard "Bay", photo: nowcrimea.ru
The main tasks of the new Russian UDC will be:
- transportation of troops operating in coastal directions;
- Reception, transportation by sea and the landing of troops and troops;
- fire damage to enemy airborne defense facilities.

The last point, which is on the footage shown by the Zvezda TV channel, may indicate that offensive weapons will be deployed on board the UDC, and not just sea-based attack helicopters. It is reported that universal landing ships of the new Russian project will be able to take on board up to 1000 people, up to 75 units of various military equipment and 6 landing and landing equipment.

It is worth noting that the landing capabilities of the "Mistral" were more modest. For example, a ship could take on board no more than 900 paratroopers (when switching to a short range) and up to 4 amphibious landing craft placed in a special docking chamber. The increase in the width of the ship positively affected the size of the internal and flight decks. So experts evaluated the capabilities of Mistral at 60 transported military vehicles, and the maximum size of the air group on board was estimated at 16 helicopters. At the new Russian UDC, the number of helicopters is likely to be increased to 20 units.

The traditional question that arose during the purchase of the Mistral and in the discussion of the projects of Russian ships of a similar class: why do the Russian fleet have such ships? There are at least two answers to it.

Firstly, this is the appearance of the possibility of over-the-air landing by the fleet when the UDC is located at a very great distance from the coast, beyond the reach of most weapons, and troops are brought ashore by helicopters and amphibious assault forces. There is no need to land equipment and landing directly on the shore, as Soviet and Russian landing ships do. The second important point is the possibility of projecting forces in various theaters of operations, as well as the organization of a supply chain in the region. The military operations in Syria have clearly demonstrated how important it is to solve these problems.