August 3 2012
6
The advent of new English tank The Chieftain and the American M60 made a great impression on the Soviet leadership. The 115 mm D-68 and U-5TS guns were not effective enough to deal with these tanks, not to mention the D-10T2S gun.

The scientific and technical council of the State Committee on Defense Equipment 15 on June 61 of the year was recommended to develop a smooth-bore gun, which has an initial speed of 1800 sabot projectile meters per second and a direct shot range of 2100 meters. In July of the same year, the designs of OKB-9 cannons were reviewed. From the submitted projects, a draft X-NUMX millimeter D-125 smooth gun was adopted.

It was decided to arm the X-NUMX-millimeter cannon D-125 tanks with an 81 and T-432 object. At the end of 62-th - the beginning of 61-th year, there was a dispute about the type of loading of the gun D-62. From OKB-81 a proposal was made to use a separate cartridge case, and Kartsev, the chief designer of the UVZ, demanded that the gun have unitary loading. A spokesperson for SRI-9 stated that a unitary shot with a high-explosive fragmentation projectile would have a mass of about 24 a kilogram. In addition, the use of unitary shots will entail a decrease in the volume of the chamber, and, consequently, to a deterioration of ballistics. As a result, it was decided to use a separate-sleeve loading. 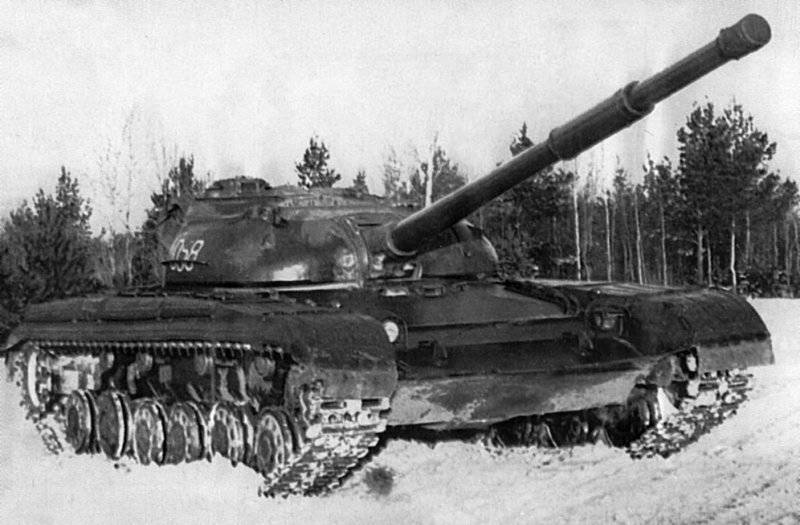 Motorized rifle unit of the Soviet Army on the BMP-1 attacks with the support of the T-62 tanks (photo from the Cabal archive, http://militaryphotos.net)

Work on the gun D-81 was initiated by the decision of the State Committee on Defense Technology and the Ministry of Defense of 11.07.62. It should be noted that the military did not really believe in smooth-bore guns, and in parallel with the 125-millimeter smooth-bore guns, the design of a rifled 122-millimeter D-83 gun was carried out. In the TK for guns, it was stated that the D-83 and D-81 should differ only in the barrel tubes and, when installed in tanks, be interchangeable. According to the project, the D-83 gun was supposed to have a sub-caliber projectile weighing 6,5 kilograms, the initial velocity was 1610 meters per second and the pressure in the channel was equal to 4000 kg / cm2. Loading smooth-bore D-83 separately-sleeve. TsNII-173 developed a two-plane stabilizer for the D-83 and D-81 guns.

In April, 64 produced 9 prototypes D-5 by plant No. 81. These guns in May sent:
two to the Kharkov Malyshev plant for installation in an 432 object;
two - to Nizhny Tagil Uralvagonzavod for installation in an 167 object (medium tank, which is a modification of the T-62 tank. Created jointly with ChTZ at plant No. 183, as a gift to the XXII CPSU Congress. The 36,7 ton project should It was armed with an X-NUMX-mm U-167TS cannon with 115 rounds of ammunition, however, the installation of the X-NUMX-mm D-5 cannon was also envisaged.The engine was a B-40 diesel engine with 125 horsepower. by comparison reduced with T-81: board reduced to 26 mm with 700 mm; lower front sheet - 65 mm with 62 mm; feed - 70 mm with 80 mm. Anti-radiation coating installed; one was left at factory number 80 for testing.

The first tank with an installed 125-millimeter cannon at the end of April 64-th year was put in scientific research institute-24 for practicing shots.

During the tests, the D-81 guns, which were held in the first half of the 64, picked up a single charge for the high-explosive and cumulative projectile. The direct shot of a cumulative projectile is 1020 meters. Penetration at a meeting angle at an angle of 60 ° - 200 mm. The firing range of the high-explosive fragmentation projectile (devil 6873) at an angle of 14 ° was 10,6 thousand meters.

Shooting sub-caliber shells showed unsatisfactory results, especially in accuracy. At a distance of 2 thousand meters, the sabot projectile at the limit pierced normal 270-mm armor, and at an angle 60 ° - 150-mm. The pressure in the bore was 4620 kg / cm2, the initial velocity of the sabot projectile - 1800 m / s.

During the firing of the 122-millimeter rifled D-83, it turned out that she had armor penetration of the sifting projectile somewhat worse compared to the D-81. At the same time accuracy and range of high-explosive fragmentation projectile is much better. The gun D-81 was assigned the index GRAU 2А26, the gun D-83 - 2А27. As a result, the D-81 smoothbore gun was chosen.

20 May 68-th Resolution issued by the Council of Ministers on the installation of more powerful weapons in the T-64 (i.e. X-NUMX mm D-125 cannon). It was decided to put it in a modification of the 81 object, which was called the 432 object. The new tank was developed from 434 year in the design office UZTM. The 1962 object went into mass production in the 434 year. In 69, the tank object 73 was given the name T-434A. 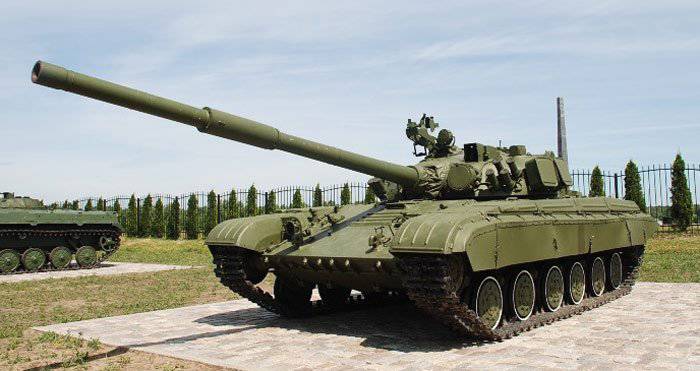 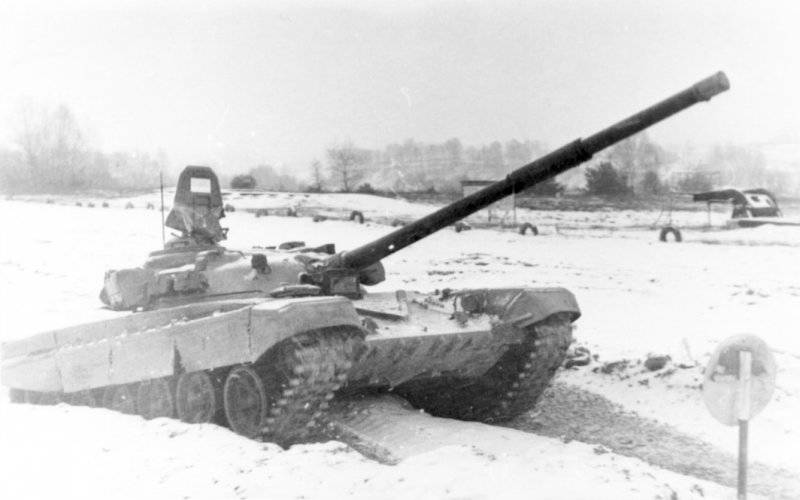 The D-81 gun had a horizontal wedge bolt, with a rolling semiautomatic machine. Knuckle hydropneumatic, hydraulic recoil brake. The cylinders of the brakes and rollback during the shot move with the barrel.

The gun had an electromechanical automatic loader with a constant loading angle and separate delivery of shot elements. Capacity machine - 22 shot. One shot charges in 8 seconds. According to the Service Manual of the Ural tank, it takes 4 — 5 minutes to reload shots of the loading mechanism conveyor.

The D-81 cannon was equipped with two-plane stabilizers of several types: 2E23, 2E26, 2EXNNXX and others. The vertical guidance speed of the 28EX2М stabilizer is 28 - 0,05 degrees per second, the horizontal one - 3,5 - 0,07 degrees per second. Getting ready for work takes about 6 minutes, while the time for continuous work is up to four hours. The average power consumed by the stabilizer is 2 kW.

During the war in Nagorno-Karabakh, several shortcomings of loading mechanisms were identified on the T-72 (probably, the same deficiencies would have been revealed on the T-64 tanks, but they were not there). In case the tank roll was 25 — 30 ° the loading mechanism failed. After the shot from the gun, it was necessary to wait about a second and only after that press the power button on the automatic loader. If you do not withstand this pause, the machine refused after several shots. Manual loading of the gun was very heavy, and this operation could only be carried out in a stationary tank.

The walls of pipes of smooth-bore tank guns compared with rifled guns had a smaller thickness and a greater length. Smooth pipes, compared to rifled pipes, have significantly lower rigidity, as well as greater sensitivity when firing to the difference in temperature distortions that appear in the metal under the influence of rain, sunlight and so on. As a result, there are distortions of the trunk. Even the smallest curvature has a significant impact on the accuracy of fire. Errors of 2А26М2, caused by thermal bending of the barrel under the influence of external conditions, could reach from 1,5 to 2,0, etc. After receiving data on the use of thermal protective covers on NATO tank guns, our authorities decided to “put” on them the D-81 guns.

The 2А26М2 brake was applied to compensate for thermal expansion of the fluid with 400 milliliters of air. This led to the formation of a liquid-air mixture in the brake rollback, which made the rollback uneven. Due to the non-uniformity of the recoil, errors in the accuracy of the fire, exceeding the errors in the accuracy of the gun system, occurred.

These deficiencies were eliminated in the modified sample D-81, which received the index 2А46М. The 2А46М smoothbore gun was equipped with a heat shield, which reduced the effect of thermal bending, as well as a rollback brake of a new design, into which a liquid amount compensator was inserted. This improved the uniformity of rollback, and also reduced the resistance to rollback until the moment of departure from the bore of the projectile.

All 125 millimeter shots are split-sleeve loading. The shells of the shots consist of a burning body, which is pressed into a steel pallet weighing 3,4 kilograms. Together with the D-81 adopted sleeve 4Ж40, later received sleeves 4Ж63. The differences in these liners were in the device and the material of the case. The cloth in the sleeve 4Ж40 is pyroxypin-celluloid, impregnated with TNT (weight 4 grams), in 4 ЖЖ63 - high-nitrogen pyroxylin-celluloid, saturated with TNT (weight 425 grams).

The data on armor penetration and ballistics are taken from various domestic and foreign advertising sources, therefore they may differ from the true ones.

Shots with sub-caliber armor-piercing shells consist of a liner with a main combat charge and an arrow-shaped projectile with an extra propelling charge. Sub-caliber projectiles ZBM12, ZBM15 and ZBM22 have a tungsten (VN-8) core with a mass of 262 — 271 grams. Subcaliber shells have a tracer, the burning time of which is 2 — 3 seconds.

Sub-caliber projectiles have an initial velocity of 1715 m / s, however, for some materials, the velocity of projectile data may be 1785 or 1800 meters per second. The range of a direct shot at the 2-meter target of the ZBM9 projectile is 2,1 thousand meters. The effective range of fire with a sabot projectile ranges from 1,5 to 2 thousand.

The cumulative projectile ZBK12 has an initial speed of 905 m / s. Direct shot range - 960 meters. The burning time of the tracer is about 7 seconds. The armor penetration capability of the ZBK12M projectile at an angle of 60 ° is 220 mm.

In a high-explosive fragmentation projectile, the reduced damage area is about 300 м2.

As shown by the combat use of 125-millimeter high-explosive fragmentation projectiles, they are quite effective. The actions of these shells on the "White House" in October 93 of the year well known to all. An example is the case of the Karabakh war, when T-72 fired at the T-55 high-explosive fragmentation projectile from 25 meters. A shell pierced the side armor and exploded inside the car. Naturally, T-55 was not recoverable after that.