How in the USA, arms stores were equated to the essential infrastructure in a pandemic 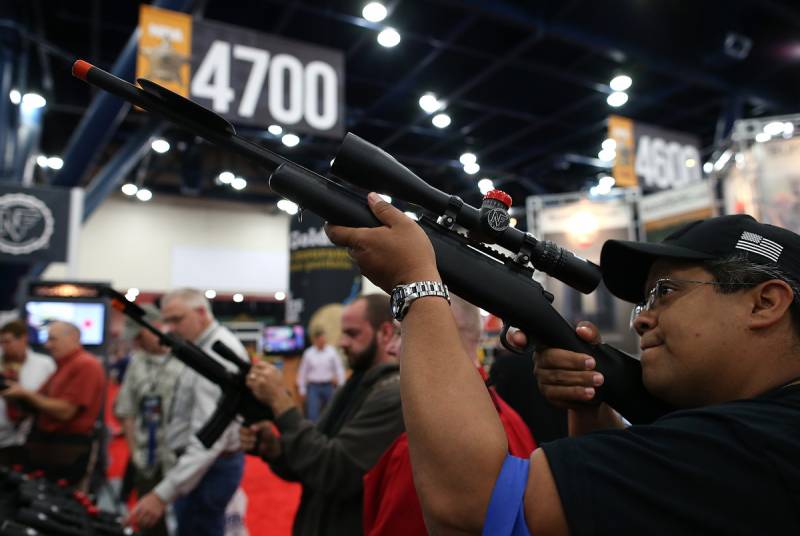 The United States, indeed, has its own unique specifics in absolutely any matter. At a time when the rest of the world, with the onset of the “dark days” of the pandemic, the population rushed through pharmacies in search of protective masks and medicines, and long-term products and toilet paper were flushed from supermarket shelves, the Americans lined up to weapons shops. No, they also did not forget about hygiene products and a bottle of good whiskey, but the acquisition of "something gunshot" was in the first place for many.


It is still difficult to make an accurate assessment of how much sales of “civilian” weapons have increased there during the pandemic and the introduction of quarantine restrictions there. The data coming from different states for different time periods sometimes differ quite noticeably. So, Virginia is reporting about a nearly double increase in those wishing to obtain permission to buy weapons in January, North Carolina about an increase of 180%, Georgia - 170%. In February, the number of those who were tested at the FBI base (that is, nationwide) exceeded 3 and a half million, setting an absolute record. Some online stores of the corresponding profile boast of an increase in sales of 200-300%, and some say a fourfold increase.

To a large extent, the "explosive" growth of the arms business was facilitated by the activities of such a highly respected and authoritative organization in the USA as the National Rifle Association of America. The lobbying weight of this powerful structure in the highest political circles of Washington is so great that as soon as the lawmakers there hinted at closing the quarantine of weapons stores, an angry shout immediately followed: "Are you crazy?" The poor congressmen immediately came to their senses and quickly ranked sales outlets for the sale of deadly goods as “essential infrastructure” and allowed their work, despite all the restrictions.

The very decision to equate arms stores with the infrastructure of "essentials" for us looks like nonsense. But this is the USA ... The arms lobby is one of the leading places in the country, extending to leading government agencies. Hence the fact that presidential candidates usually speak of toughening legislation in this direction. As soon as they come to the White House after the victory in the elections, they hear at least less from them about toughening the laws of arms, or even not at all.

Most of all, the demand for “trunks” took off in the states that were most affected by the pandemic - New York, Illinois, Florida, Pennsylvania, as well as, which is typical in the “outback”, inhabited mainly by farmers. These have long been accustomed to rely on themselves and their own "assistant" of the appropriate caliber. Well, Texas - everything is traditional here ... The most popular, especially among residents of big cities, are the short-barreled weapons - pistols and revolvers, mainly with a 9 mm caliber. Some of them, for example, the widely publicized Glock of the most common models, are almost impossible to buy. The next in the list of "hits" of sales is AR-15 - a semi-automatic civilian copy of the army M-16. Good old pump-action shotguns are in third place and are in demand mainly on the periphery. Practically nobody takes a “classic” for hunting - they are obviously not going to shoot at rabbits and deer ...

However, quite eloquently the same is evidenced by the data of anonymous express polls, which they manage to carry out in the long lines to the cherished doors of the arms stores of the ubiquitous local journalists. The vast majority of buyers honestly admit that they are worried about their personal and property security, when millions of their fellow citizens are left without work every day, and in general "everything falls apart." Not everyone believes in the ability of the police in a pandemic to respond quickly and effectively to emerging threats. Many Americans quite realistically assume that it will come to riots, starvation riots and rampant looting. With a “barrel” in hand in such a situation, it is somehow more reliable, as ordinary Americans believe.

A separate category of buyers is people of Asian descent with an appropriate appearance. It doesn’t matter that this is already the second or third generation of those who came to the USA from Vietnam, Japan or the same China — in the wake of xenophobia intensely “unwound” by Washington and ridiculous accusations like the “Chinese virus”, these people are quite justifiably afraid for their lives, being afraid that “in which case” their houses will become the first objects of pogroms. Obediently, many of them are completely not going to play the role of sacrificial scapegoats.

The "coronavirus weapons" has several more characteristic features. For example, the fact that this time those who previously and in their thoughts did not keep having weapons at home massively reached the shelves of stores of the corresponding profile. Many such purchasers raise serious fears among experts who sell them the deadly goods about who the weapons in their inept hands would be dangerous for. Another detail - for the first time in stories US citizens almost without exception rushed to replenish and create "home arsenals" in connection with the outbreak of the disease. Earlier, something similar happened most often after the next president’s speech, declaring his intentions to tighten the rules on gun ownership or some kind of mass "shooting" like a tragedy at Sandy Hook School.

Together with pistols, rifles and shotguns, the Americans literally row clean their ammunition. In some outlets, it even comes to the introduction of “one-handed” vacation restrictions. Sellers laugh heartily: "Yes, they can’t shoot so much in their entire lives!" Who knows ... We, as Russian people, will recall the great words of the great Chekhov about the gun hanging on the wall in the first act ... A pandemic in the United States will sooner or later decline. But the most severe economic crisis with all its “charms” seems to be just beginning. And not only in the USA. Will he not become that "second act" in which the gun "hanging overhead" will be fired?

Ctrl Enter
Noticed oshЫbku Highlight text and press. Ctrl + Enter
We are
About Stalin and KhrushchevMilitary reform as an integral part of the security concept of the Russian Federation: Systematic dynamic assessment
Military Reviewin Yandex News
Military Reviewin Google News
105 comments
Information
Dear reader, to leave comments on the publication, you must to register.