Eighteen years of valor and courage: the special forces detachment of the MVD "Rus" 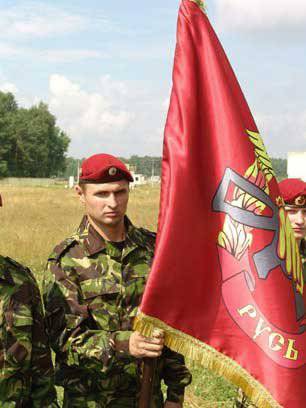 The birthday of the special forces detachment of the Internal Troops of the Ministry of Internal Affairs “Rus” is considered to be 1 August 1994. It was formed on the basis of a separate special-purpose motorized rifle battalion, which, up to 1991, together with the Ninth Directorate of the KGB, was engaged in guarding the facilities of the Central Committee of the Communist Party. Soon, M.Gorbachev signed a decree according to which all the duties of protection from the battalion were removed, the servicemen were left without work. Therefore, the government faced a problem: what to do next with an exemplary military unit. The fact that it was not worth disbanding was understood by the military leadership headed by Anatoly Kulikov. In addition, the situation in the world (periodic inter-ethnic conflicts) made the military-political leadership think about how to make the army more combat-ready and effective. One of the main tasks that were set before the armed forces was to confront illegal armed groups and terrorist groups, extremists, most of whom concentrated on the territories of the North Caucasus, Transcaucasia and Central Asia.

In addition to regular troops, similar tasks were assigned to special forces, of which there were only two at that time: Rosich and Vityaz. As for the "Vityaz", he had a significant history and a good track record of successfully performed operations, both as part of the USSR and as part of independent Russia. “Rosich”, on the contrary, was created only in 1992 year and was part of the North Caucasus Military District.

The military leadership was well aware that the new conditions prevailing in the international arena, as well as the events that took place in North and South Ossetia and Ingushetia, assumed the development of special forces.

Thus, it was decided to create another special detachment, which became part of the Dzerzhinsky division. Colonel P.Zaitsev became his first leader.

Before the newly formed squad was put a large list of tasks that needed to be completed as soon as possible, because they belonged to the time of the creation of the unit. Thus, these tasks include participation in the operations of the Ministry of Internal Affairs to curb aircraft and hijackings, assist in curbing mass riots, strengthening the protection of government facilities in case of need, freeing hostages, ensuring the safety and security of the leadership of the Ministry of Internal Affairs in emergency situations. . 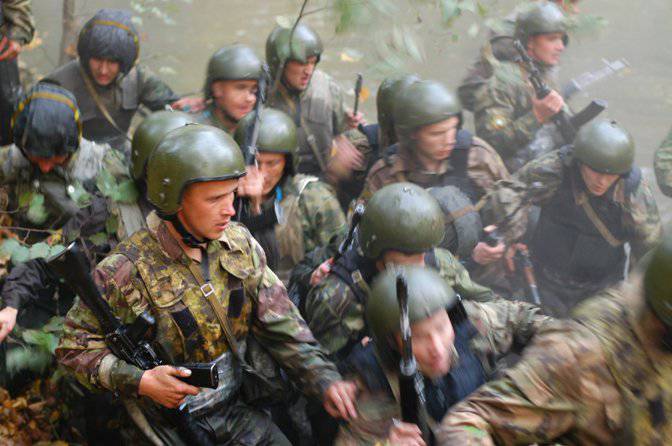 But, as is known, the period of formation is one of the most difficult. Therefore, a great help from the new special squad was rendered by the experience of another division, the Vityaz, from whom the staff structure and special training programs were taken, which in practice proved their effectiveness. Since the main principle of recruiting special forces is voluntary desire, after the organizational measures in the new subdivision there were only those who really wanted to continue serving in this type of troops. It is noteworthy that the officers remained almost completely, their professionalism and ability to acquire new knowledge and skills in a short time did not cause any doubts.

If we talk about the technical equipment, it practically did not differ from what the linear units and units of the internal troops possessed. The detachment was armed with machine guns, Kalashnikov assault rifles, and grenade launchers. Special weapon appeared a little later - these were Stechkin pistols, Cypress submachine guns. A distinctive feature of the special squadron was the uniform - each fighter had four sets of uniforms, distinguished by convenience and functionality, as well as special armored helmets “Mask-1”.

In those years, the practice of giving names to special units just appeared. And one of the first names that was assigned to the new division was “Center” (because it was practically in the very center of the capital). And at first, this name received support among the fighters. But in 1995, the squad received a new name - “Rus”, because it was the most resonant and memorable. In addition, it was a reflection of the history of the state, its heroic past.

The entire personnel of the unit fully mastered the skills of the fight against terrorism, methods of freeing the hostages. And in order to familiarize themselves with international experience in the industry, the detachment's fighters visited Austria, Germany and Israel, and took part in an international seminar on the issue of the release of hostages.

In 1994-1995, Russia, by the order of the President of the Russian Federation, B. Yeltsin, was sent to the Chechen Republic, where hostilities were taking place. This was the first special christening of the special squad. The mood of the fighters was decisive, many of them as part of other units had already taken part in military conflicts in Afghanistan, so they were well aware of the danger lurking them. The problem was that the detachment needed good military equipment for successful operations. In the fleet of “Rus” there were only ordinary trucks that were absolutely not suitable for conducting any actions in the North Caucasus. With great difficulty, 4 armored personnel carriers were obtained, which were far from new.

Among the tasks that were set before the detachment, the main ones were the restoration of the constitutional system of the Chechen Republic and the conduct of operations to destroy illegal armed groups. Achievement of these tasks was provided for through special operations, search and rescue and reconnaissance activities, the organization of ambushes and escort colon.

Rus took part in almost all the battles and operations that were carried out in Chechnya: the liberation of Argun, the village of Aldy and the Gudermes operation, and the battles in Grozny. Almost all the fighters of the unit received serious injuries and contusions.

After the events in Chechnya, the fighters of the special unit “Rus” took part in operations to free the hostages in Budennovsk, Pervomaisk, and Kizlyar.
When the militants seized the hospital in Budennovsk, the detachment was alarmed. Initially, the location of the city was determined, but no maps of it were available. It was decided to fly there and look around, that is, you need to be ready for an autonomous task. And although the soldiers of the “Alpha” and “Vega” special groups took part directly in the operation itself to storm the hospital building and free the hostages, the soldiers of “Rus” supported them by acting in the second echelon and acting as a reserve.

After the events in Budyonnovsk, the militants sharply changed their behavior, a relative lull occurred. Therefore, the main task, which was set before the special forces, was to provide protection and escort of high-ranking officials from the Ministry of Internal Affairs, as well as representatives of the OSCE mission, who arrived in Chechnya to negotiate with terrorists.

During the years of military travel to Chechnya, more than 800 soldiers of the special forces "Rus" were awarded orders and medals, 6 military personnel received the title of Hero of Russia, and half of them - posthumously.

In 1997, a monument was opened in memory of the dead. It is installed directly on the territory of the part.

In the 1999 year - the next test. This time, the soldiers of the "Rus" squadron took part in antiterrorist operations in the North Caucasus region. This year is significant for the division because it was then that he successfully completed the most difficult task of unblocking the reconnaissance of the internal troops of the Ministry of Internal Affairs of the Russian Federation and taking control of Mount Shepherd near the village of Chabanmakhi (Dagestan). All actions required tremendous effort, since often all the necessary equipment and weapons had to be carried, and this is about 40 kilograms of additional weight. For the first time, an assault landing took place in Dagestan, and the soldiers were able to prove their professionalism in the introduction tactics and use of the latest weapons and equipment: the LNG-7 rocket launchers and the AGS-17 "Flame" automatic rocket launchers.

Then - again Chechnya, where the detachment conducted anti-terrorist special operations. Rus is rightfully recognized as one of the most productive units of the internal troops of the Ministry of Internal Affairs of Russia. His fighters took the most direct part in the liquidation of such famous field commanders as Abu Umar, Arbi Barayev, Abu Yakub.

In 2003, the Rus soldiers took part in security measures during the celebration of the St. Petersburg 300 anniversary.

All this confirms that the detachment was and remains one of the most professional special forces in Russia. Traditions that have developed during the time in the detachment are sacredly honored, just like the symbols, in particular, the maroon beret. And this is not surprising, because all the warriors know how expensive they are. Every year new young warriors come to the squadron, who will eventually leave their mark on the squad history. So the story of "Rus" will continue!