On the dagger and the origin of this word: 10 years ago this weapon was removed from the list for officers and midshipmen 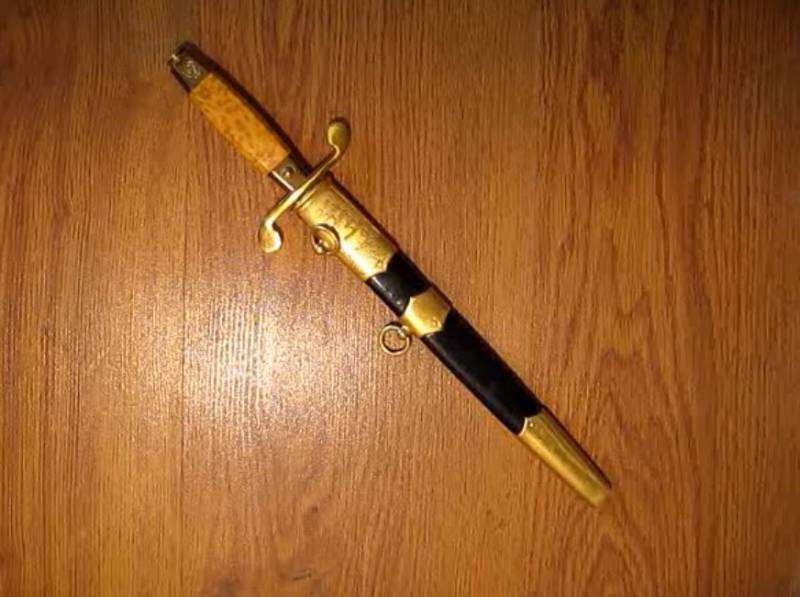 One of the characters fleetIn addition to the Andreevsky flag (along with the banner of the Soviet Navy), a marine vest, and a sailor cap, one can rightly be considered a dagger. Of course, it’s well known that this is personal weapon naval officer. But with the understanding of the origin of this word there are difficulties even among sailors. And given the fact that this year marks 80 years since the dagger began to be used as a uniform accessory by the military personnel of the command staff of the Navy of the Soviet Union, it is worth paying some attention to this weapon and the word itself.


So, in 1940, the command staff of the USSR Navy received the right to wear a dagger, which is the famous dagger.

Where did this word come from?

There are several versions on this subject, but they all have one thing in common. Scientists believe that this is a term that came into the Russian language - a derivative of the word "knife" in different languages ​​of the world. Some consider Persia as the "source", others India, where the words "curt" and "krtis" meant precisely "knife".

These words reached a number of European languages. For example, in northwestern Italy, the word “cortello” refers to a knife with a relatively short blade. This is a peculiar dialectic “diminutive” from the usual word “knife”. In this regard, the term "dagger" is the Russification of the diminutive designation of "court", "kert" or "krta".

But is the dagger really small to fit the “knife” option? The length of the classic officer’s dagger is 40 cm. The total length of the admiral’s dagger is 44 cm, of which 28 cm is the blade. There is also an option with a 49-cm dagger.

It is clear that today the dagger has actually lost its original purpose. And its purpose is to use edged weapons during the boarding of the ship. It was originally about a personal dagger of any sailor on a warship, regardless of his rank and position. Such daggers were used by European sailors, as well as representatives of Turkish squadrons. Exceptionally marine attributes such weapons began to get closer to the XVII century.

Not so long ago, the issue of the right to store and wear a dagger for retiring naval officers began to be actively discussed in our country. This question arose in connection with a series of scandals related to the fact that officers were ordered to take daggers. In March last year, the Federal Security Service even had to issue a special order. The document establishes the procedure for obtaining "for eternal storage" dagger by certain categories of military personnel of the Navy. In particular, naval officers and midshipmen who have left military service should retain the right to wear a naval uniform in the absence of a contraindication to the possession of knives.

In 2020, five years have passed since the president initiated the adoption of the law on the return of the dagger “to military service”. The fact is that in 2010 (exactly 10 years ago) the dagger was generally removed from the list of personal weapons of midshipmen and naval officers, guided by problems in the legislation governing the right to bear arms. This, for obvious reasons, caused discontent in the Navy. Now the situation has been resolved in favor of the dirk and in favor of those who have the right to wear it.
Ctrl Enter
Noticed oshЫbku Highlight text and press. Ctrl + Enter
We are
Interview of Vladimir Putin with Radio Europe-1 and TF1December 2010 years. Russian March. Senseless and merciless? Notes not a Russian person
Military Reviewin Yandex News
Military Reviewin Google News
103 comments
Information
Dear reader, to leave comments on the publication, you must sign in.