The first fight in the Donbass in 2014: some details 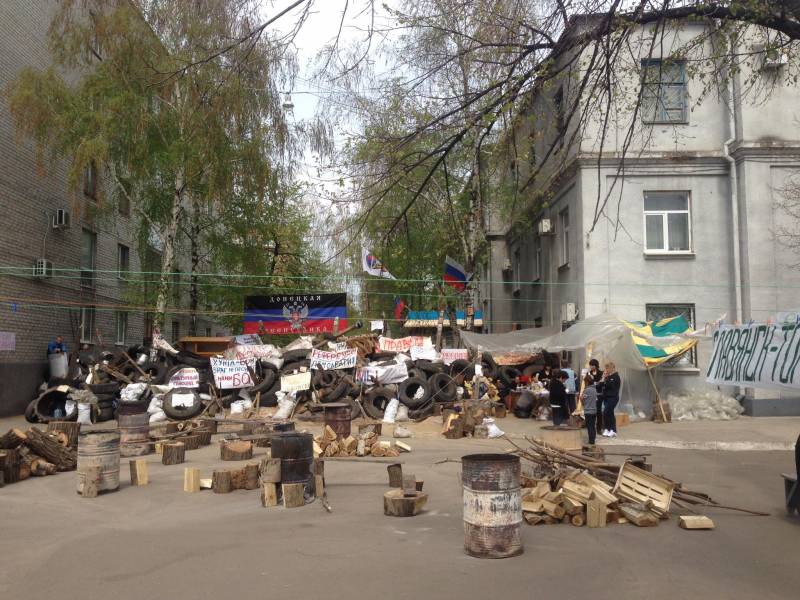 Speaking of a civil war, it is always extremely difficult to find a “reference point” in it, starting from which a civil confrontation turns into a fierce armed conflict. Who was the first to pull the trigger? Whose blood has spilled before? Each of the parties subsequently blames the transition from words to shooting their own opponents, while being holy confident in their own right. Therefore, we will not now search for who and when the first bullet was fired in the Donbass war, which has been going on for more than six years, but we’ll talk about the clash of the parties, which can be considered its first full-fledged battle.


Perhaps the most correct in this case will be the attempt by the Ukrainian security forces to assault Slavyansk, which at that time was controlled by the Donbass people's militia under the command of Igor Strelkov. All that was before - and a shootout near the city on April 2, when “cool special forces” gathered from all over Ukraine stupidly got into the distribution, and a raid on one of the DPR checkpoints near the village of Bylbasovka, committed on Easter April 2014 and decided to “play at war ”by the Kiev“ pravoseki ”and which ended extremely sadly for them in the end, can only be considered episodic skirmishes, a breakdown.

But on May 2, the considerable punitive forces, which had pulled down to this moment near Slavyansk, decided to take a rebellious city with a “dashing swoop”, whose defenders were clearly not going to add weapon. It must be admitted that the attackers had certain grounds for counting on success. To assault the positions of the militias, many of which, according to the same Strelkova, saw weapons for the first time, in April 2014, soldiers of special units of the Ministry of Internal Affairs and the Security Service of Ukraine, reinforced by an army "airborne assault," were supposed to. Moreover, the main “trump card” of the attackers was to be combat helicopters, at the helm of which were pilots who nominally had combat experience - who served in the UN “peacekeeping” contingent in Africa.

However, either something turned out to be wrong with the pilots, or with technology, but instead of a menacing blow in the best traditions of Hollywood action movies, a disgrace turned out. The first Mi-24P "09-Yellow" from the 16th tactical brigade attacking Slavyansk aviation The Ukrainian Air Force was shot down from MANPADS on the outskirts of the city at the very beginning - literally at 3 a.m. Two pilots died, the third was captured (subsequently was transferred to his own). The second "turntable" - Mi-24P "40-Yellow" in exactly the same way "failed" a little later. Nobody escaped from her crew. The third helicopter was the luckiest of all - the MI-8 knocked out of small arms managed to land.

Unfortunately, things were not so good on earth. According to the recollections of the militia, of the nearly 30 hand-held anti-tank grenade launchers they had in local warehouses, none were suitable for battle — they all turned out to be malfunctioning junk. There was simply nothing to contain the “armor” of the 95th airborne brigade of the Ukrainian army, torn to the height of Karachun. No matter how heroic and stubborn the resistance of the militia fighters was, many of which, including the famous Sergey Zhurikov (call sign "Daisy") were literally dead, but even at the cost of their lives, Karachun could not be kept.

This, in fact, was the only tactical success of the Ukrainian side that day. Unfortunately, the occupation of the hill dominating the Slavyansk subsequently allowed the deployment of artillery batteries there, the fire of which methodically turned the city into ruins and played a significant role in the fact that the militia eventually had to leave it. Nevertheless, by the end of the day on May 2, it was planned as a “last and decisive” assault. Three lost helicopters, the death of five pilots and several paratroopers demoralized the attackers so much that they did not take offensive attempts of this magnitude for more than a month. In the end, Slavyansk, despite the enormous superiority of the Ukrainian security forces besieging him over the militias in numbers, and especially in equipment and heavy weapons, held out until early July 2014.

The main thing that the battle clarified was that the events in the Donbass were not “anti-terrorist operations”, but a real civil war, using all available forces and means available to the warring parties. Kiev has shown that it intends to "appease" the rebellious region with fire and sword, regardless of the number of possible victims, and the defenders of Donbass have proved their willingness to defend their own land without sparing themselves. It was a war ... And then no one could even imagine that it would last not days, not months, but for many years.

Ctrl Enter
Noticed oshЫbku Highlight text and press. Ctrl + Enter
We are
Commentary on A. Petrov's interview “Fire and Tactics in the Russian Army: Another Look”Boroday: "In fact, the shooters are already fighting on the side of the enemy"
Military Reviewin Yandex News
Military Reviewin Google News
24 comments
Information
Dear reader, to leave comments on the publication, you must sign in.