Crusade to the East 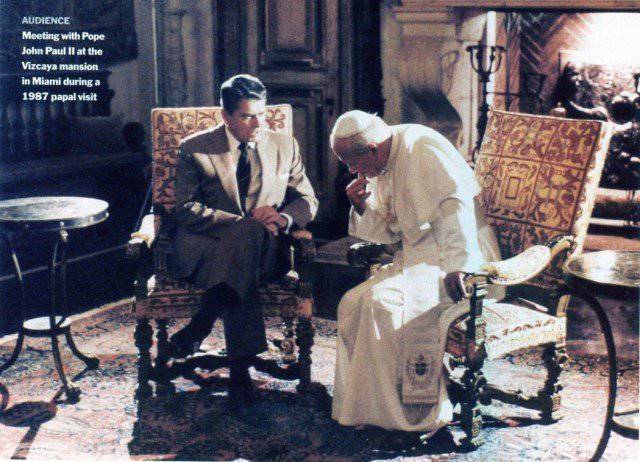 30 years ago, 7 June 1982, the most significant event of the latest in the Vatican stories - a meeting of US President Ronald Reagan (the son of a zealous Catholic Irishman) with Pope John Paul II (in the world - a Pole Karol Wojtyla). The conversation, which lasted for almost an hour, was mainly about Poland and “Soviet rule” in Eastern Europe. As a result of this meeting, the President of the United States and the head of the Roman Catholic Church agreed to conduct a joint secret operation, the purpose of which was to "accelerate the collapse of the communist empire." Richard Allen, who has served as Reagan’s national security adviser, will later say, “This was one of the greatest alliances of all time.”

In order for this alliance to find a symbolic embodiment, Reagan the next day made a keynote speech in London in which he declared a "crusade" against the "evil empire." This was followed by a special presidential edict proclaiming 1983 the year as “the year of the Bible.” (This decision was confirmed by 18 on April 1983 of the year, when John Paul II took on almost the full staff - about 200 people - of one of the most influential para-political organizations of the planet of the Tripartite Commission). Thus, the next "Drang nach Osten" symbolically became the successor of the first "crusade of the Germans against the Slavs", proclaimed in 1147 by Pope Eugene III.

The center of all the operations of the "new crusaders" was chosen Poland. Both Reagan and Wojtyla were convinced that if the Vatican and the United States combined their efforts to crush the Polish government and fully supported the Solidarity movement outlawed in Poland, then Poland could be pulled out of the Soviet bloc. Under the auspices of the President of the United States and the Pope, a widespread network was created, which began to fuel and widely advise Solidarity. According to it, money from the CIA, the US National Endowment for Democracy, as well as from the secret accounts of the Vatican began to flow into Poland. The key figures from the United States were CIA Director U. Cayce and former commander of NATO forces in Europe A. Heig (whose brother, Father Haig, held a high position in the hierarchy of the "papal guard" - the Jesuit Order) orders.

It should be noted that the strategic interaction between Washington in the person of Reagan and the Vatican in the person of John Paul II, as well as between the heads of their special service, William Casey (CIA) and Luigi Poggi (intelligence from the Vatican, which Western researchers call the "Holy Alliance") a few weeks before the solemn oath-taking ceremony at the Capitol of R. Reagan, who was elected president largely thanks to the support of Catholic voters. Since the end of 1980, communications between the USA and the Vatican on the Polish issue have been carried out by Zbigniew Brzezinski and the head of the Vatican propaganda department, Cardinal Joseph Tomko, who led the Vatican counterintelligence service of Sodalitium Pianum (until John Paul II merged the Vatican special services into one and appointed her head Luidji Pododka Luzhi Podzhanke Podidan Podjuni Pododka).

The priests and representatives of the American and European "independent" trade unions and intelligence services handed over to the "man of the people" Lech Walesa and other leaders of Solidarity strategic recommendations reflecting the way and thoughts of both the Vatican and the Reagan administration. Taken out by that time, like the devil of a snuffbox, Wales, during the previous meetings of Reagan and Wojtyla, managed to work for many years as an “electrician-mechanic” at the Gdansk shipyard for only a few months. It was necessary to create the image of "a man of the people." Prior to this, the “people's leader”, together with his relatives, was held by the Catholic Church for ten years, or, as they said in Soviet times, he was parasite. His work was supervised personally by the head of the Vatican intelligence service through his agent, the Polish Jesuit priest, Casimir Przydatek.

Přídatěke was initially tasked with gathering a group of Polish priests who could infiltrate potential strikers and trade union structures, including the newly created trade union Lech Walesa, which was called Solidarity, became the object of special attention. Every evening, agents in the cassocks made reports with first-hand data drawn from conversations with workers and other priests. One of the most informed whistleblowers was Henryk Jankowski - the priest of the church of St. Brigid, the parish that Walesa visited in Gdansk. Among other things, Przhidatek convinced Walesa to introduce into the leadership of Solidarity the editor of the Catholic newspaper Wiez, Tadeusz Mazowiecki, and the historian Bronislaw Geremek. From this point on, according to Western researchers, "the strike movement came under the control of the church."

In the opposite direction, i.e. to Washington and the Vatican, information from the field was not only through the “Fathers of the Church”, recruited trade union leaders and activists of “Solidarity”, but also from the “fifth column”, i.e. agents, located directly in the Polish government and the Ministry of Defense (one of the agents who worked most effectively for 11 for the Vatican intelligence service for years was the adjutant of General V. Yaruzelsky colonel of the Polish General Staff Ryszard Kuklinsky).

Member of the US House of Representatives Intelligence Committee, Henry Hyde, later said: “... in Poland, we did everything that is done in countries where we want to destabilize the communist government and step up resistance against it. We provided support for supplies, including technical, in the form of illegal newspapers, radio programs, propaganda, money, instructions for creating organizational structures and other councils. Actions from Poland directed outward inspired similar resistance in other communist countries of Europe. ”

American journalist Carl Bernstein testifies that conducted a journalistic investigation into the relationship between the Vatican, Washington, the Polish Catholic Church and the Solidarity movement in the 1980s (published as an article in the New York Times magazine): “American Embassy in Warsaw became the leading center of the CIA in the communist world, and by all measures the most effective ... Casey became the main architect of the policy developed in relation to Poland. Meanwhile, Pipes and members of the US National Security Council were busy preparing drafts for the proposed sanctions. ”

“The goal was to drain the Soviets and put the blame on them for declaring martial law,” Pipes specifies. “The issue of sanctions was developed jointly with Special Operations (a division of the CIA in charge of the groups involved in performing covert operations), and the main task was to preserve the life of Solidarity, providing it with money, communications, equipment” ... In the first hours of the crisis, Reagan ordered that the American intelligence be delivered to John Paul II with maximum efficiency ... Reagan, Casey, Clark took all the fundamental decisions in close contact with John Paul II ... Meanwhile, in Washington a close relationship was established between Casey, Clark and Archbishop Laga. ”

Robert McFarline, the former deputy of Clark and Haig, said: “Almost everything related to Poland went bypassing the normal channels of the State Department, and passed through Casey and Clark ... I knew that they were meeting with Lagi and that Lagi was to be received by the president ... “As for Laga, he has at least six times gone to the White House to meet with Clark and the president. Here is the testimony of Laga himself: “My role was to facilitate the role between Walter and the Holy Father. Holy Father knew his people. The situation was extremely difficult, and it was necessary to decide how to insist on human rights, freedom of religion, how to maintain Solidarity ... I said: "Listen to the Holy Father, we have 200-year experience in this matter."

Here we make a small digression and explain what kind of “experience” the Catholic archbishop could have in mind. The fact is that the term “propaganda” as a specific type of combined (informational and possible physical) influence in order to increase influence and power was introduced by the Catholic Church. It sounded in the modern sense of January 6 1622, when the Vatican created for the first time in the history of mankind the "Ministry of Truth" - a special structural unit to strengthen the struggle for its ideological and political influence. In the name of this special unit, which has become one of the types of modern intelligence services that collected intelligence information throughout Europe, the word “propaganda” was used.

So, US Secretary of State A.Heig would later notify later: "Without any doubt, the information that the Vatican supplied" there "absolutely surpassed ours in all parameters, both in quality and efficiency." Wojciech Adamitsky, who was in charge of organizing the underground publications of Solidarity, said: “The Church, in terms of supporting Solidarity, played a primary role both actively and secretly ... Secretly - supporting political activities, delivering printing equipment of all types, providing rooms for secret meetings and rallies, preparation of demonstrations. (The CIA, in turn, shared with the cardinals information based on the overheard telephone conversations of Latin American priests and bishops who expressed views opposed to American henchmen in their countries).

Cardinal Silvestrini, former deputy secretary of state of the Vatican, testifies: “Our information about Poland was based on a very good basis, for the bishops maintained constant contact with the Holy See and Solidarity.” Bernstein testifies: “On the territory of Poland, the priests created a communications network that was used for exchanging messages between churches where many leaders of Solidarity were hiding. All the key performers in this enterprise from the American side were devout Catholics — CIA chief William Casey, Richard Allen, Clark , Haig, Walters and William Wilson. "

Reading all these revelations, someone might think that the clandestine operations that ultimately led to "the largest geopolitical catastrophe of the century" are in the past. By no means! The case of the “new crusaders” continues to this day, but this is another story.