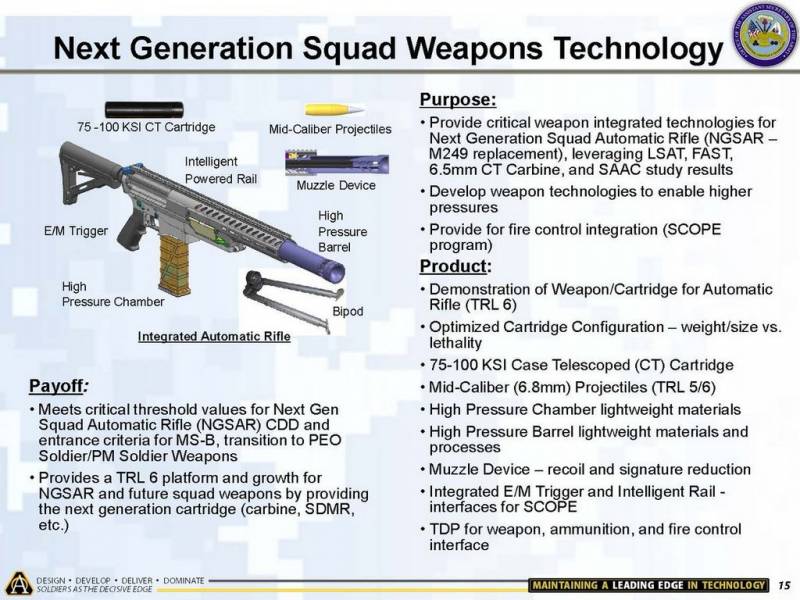 Currently, the U.S. Army, in collaboration with several commercial organizations, is implementing the NGSW (Next Generation Squad Weapon, “Weapon a new generation for separation ”), the purpose of which is to replace existing automatic rifles and light machine guns. Regularly published new data on the progress of work and successes.

In spite of difficulties

On May 13, Task & Purpose published new data on the NGSW project. The information was revealed by Bridgette Siter, a representative of the Soldier Lethality Cross Functional Team, which is responsible for the development of advanced weapons. Despite the known epidemiological problems, the work continues on schedule and gives the necessary results.

At present, tests of experimental weapons are being carried out involving military personnel of combat units. B. Seater notes that in the NGSW project, “Soldier Centered Design” is of great importance, and therefore the feedback of the operator and the designers is of particular importance.

To date, 567 soldiers and officers of the ground forces and marine corps have familiarized themselves with the NGSW program samples. They accumulated a total of 7658 hours with this weapon. Experimental work is ongoing, and in the near future, these indicators will increase significantly.

Plans have already been drawn up for the further introduction of promising weapons, both within the framework of military tests and after adoption and putting into operation. This was announced on May 14 by Military.com with reference to Colonel Joel Babbitt of the Special Operations Command.

Machine gun NGSW-R from Textron. Photo Vpk.name
Colonel Babbitt noted that his department enthusiastically follows the NGSW program and is waiting for the completion of work. US SOCOM wants to get new weapons as soon as they begin mass production and deliveries to the troops. The officer also noted the importance of fruitful cooperation between different organizations and established feedback.

Samples of the NGSW program have already shown themselves well and even influenced the plans of US SOCOM. Based on the results of testing these weapons, the Command decided to suspend its own development program for the 6,5-mm machine gun. Instead, it is planned to take a sample from the army program.

Through the SOCOM line, NGSW-type complexes can receive several units and formations related to the Special Operations Forces. These will be the 75th Ranger Regiment, the Green Berets and other special forces in need of modern and effective small arms. At the same time, the delivery dates to the listed structures have not yet been specified.

According to already published data, the current stage of military testing of two types of weapons will continue until the summer of next 2021. The purpose of this phase of the program is to identify all the pros and cons of the designs presented. The army will spend the next few months analyzing the test results, after which the winner will be selected.

Machine gun from Textron. Photo Vpk.name
The winner of the NGSW will be officially selected and announced in the 1st quarter of 2022. Then they will spend about a year finalizing the selected sample, preparing the series, etc. Not later than the beginning of 2023, they will launch the production and supply of finished weapons to the troops. The production and re-equipment rates of specific combat units have not yet been specified.

The program is highly complex, and weapons developers have to spend a lot of time and energy to solve specific problems. According to various estimates, the process of fine-tuning weapons and ammunition can drag out, at least. until the middle of the decade.

Recall that the NGSW program started a few years ago, and five arms and ammunition companies initially joined it. Its goal is to create a fundamentally new rifle systems with increased firepower, corresponding to the current requirements of the army. It is required to develop a new ammunition with increased penetration power, as well as weapons for it, capable of replacing the M16 / M4 rifles and M249 machine guns.

The program includes the development of two options for new weapons. Product NGSW-R is positioned as a new automatic rifle. The niche of a light machine gun will be given to the NGSW-AR product. Two types of weapons should use a common cartridge and have a maximum degree of unification. In addition to increased firepower, weapons require the ability to install a flame arrester or a silent firing device, interchangeable shops, well-developed ergonomics, etc.

Cartridge from General Dynamics. Photo Modernfirearms.net
Five arms companies were involved in the program at an early stage. To date, the number of contestants has been reduced to two. The first project is being developed by several companies led by General Dynamics, the second is done by AAI Corporation / Textron Systems and Sig Sauer. Both consortiums offered their versions of ammunition and weapons for them.

To date, the appearance of the developed complexes and their main features have become known, while other details have not yet been published. The requirement to increase firepower has led to the need to develop reinforced cartridges, which affects the characteristics of weapons, and also requires the use of specific design solutions.

For example, in the complex from General Dynamics, the .277 TVCM cartridge from True Velocity, based on a plastic sleeve, is used. The RM277 NGSW-R assault rifle for this munition is made according to the bullpup scheme and is equipped with developed means of reducing recoil. In particular, a rollback buffer is assumed. Ammunition is provided by a box magazine for 20 rounds.

The machine from Textron and AAI has a traditional layout, but uses a telescopic cartridge. In this regard, the product has a sophisticated ammunition supply system with a movable chamber. In terms of ergonomics, the Textron NGSW-R differs little from modern rifles, but should show advantages in combat qualities.

Cartridge .227 TVCM from the complex from General Dynamics. Photo Modernfirearms.net
In parallel, the program is developing sighting equipment. L3 Harris Technology and Vortex Optics are focusing on this topic. In April, they received new contracts for the work, the result of which will be the appearance of developed sights specifically for new weapons.

Promising samples of pilot batches have already reached the field tests involving military personnel. Several hundred fighters spent thousands of hours at the training grounds and gained some experience. Next year, the command plans to choose a winner and launch subsequent work preceding the widespread introduction of new weapons. However, while the situation does not lead to excessive optimism.

NGSW projects use many unusual and fundamentally new solutions that need to be developed. Identification and correction of deficiencies can take a lot of time, and the refinement process will continue even after putting into service. In addition, some technical features of a negative nature cannot fundamentally be removed. This can be attributed to excessive noise during shooting, which persists even when using muzzle devices, a large mass of the structure and an increase in cost in comparison with other samples.

Nonetheless, those in charge and organizations generally appreciate the current program. Its current results suit the customer, although not without reservation. The work will continue, and they are likely to be brought to its logical end. However, at the moment, all the proposed projects remain "raw", and the rangers or "green berets" will have to hope that their refinement will be successful.