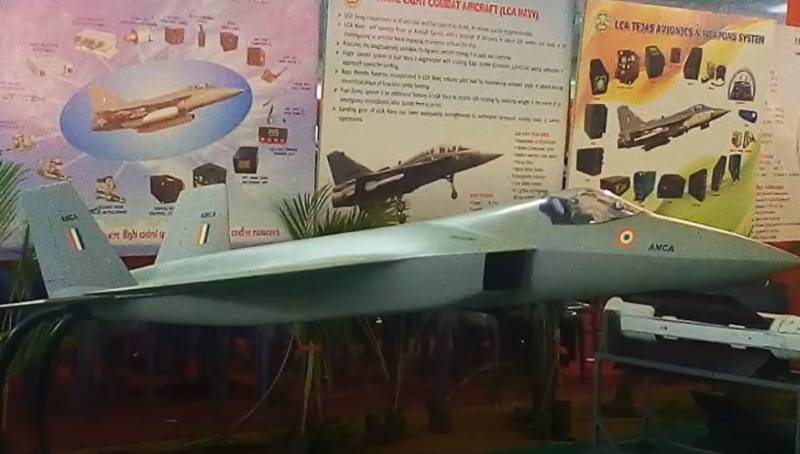 In India, they announced the main parameters for the fifth generation fighter, which they are going to create on their own. We are talking about a promising aviation complex, which is currently designated as AMCA.


In India, it is noted that the aircraft will have fundamental differences from any generation 4 fighter, including upgraded versions 4+ and 4 ++.

And the word "will", apparently, does not bother anyone in India. For what specific time, the developers are ready to present the final concept of a promising fighter, it does not say. But it is reported about those parameters that are going to be implemented in a new project.

Some parameters of the AMCA concept voiced by Indian Marshal aviation Anil Chopra, today a member of the commission of the military tribunal in the state of Uttar Pradesh.

The aircraft will be twin-engine. Which engines are currently designated as the basis? Marshall believes that by 2032 the country should have its own turbojet engine, which will create an afterburner traction of about 16,5 tons. It is argued that one of the tasks of developers should be the task of reducing the mass of the engine, for which it is planned to use the "latest achievements of the metallurgical industry." The engine should receive an automated control system for operating parameters with their distribution.

An Indian-made fighter plans to equip an “advanced” radar with AFAR and an anti-jamming system for the enemy.

What the Indian Air Force speaks with special reverence is the "stealth" coverage of AMCA. The claimed parameter, EPR, is "lower than that of the Chinese J-20." What, by the time of the birth (if at all) of the AMCA will be the ESR parameters of Chinese fighters, today for obvious reasons no one can say, but in India they are firmly convinced that AMCA will have better indicators ...

The Ministry of Defense of India notes that the design of the glider and the tail of a promising fighter involves a diamond shape with "trapezoidal wings and a fully movable vertical tail." This, according to the marshal, will allow AMCA to achieve "greater maneuverability."

The first flight of the prototype is provided in 2025. But if you take into account the data on the engine, it turns out that by 2025 the AMCA prototype will not use the power plants that Marshal Chopra spoke about. Arming plans to implement by 2032.

It is alleged that a fifth-generation carrier-based fighter will be created for the Indian naval forces. The timing of its creation is not reported.
Ctrl Enter
Noticed a mistake Highlight text and press. Ctrl + Enter
We are
Indian Jaguar crashed in Uttar PradeshReports from the militia of New Russia for 27-28 September 2014 of the year
40 comments
Information
Dear reader, to leave comments on the publication, you must to register.