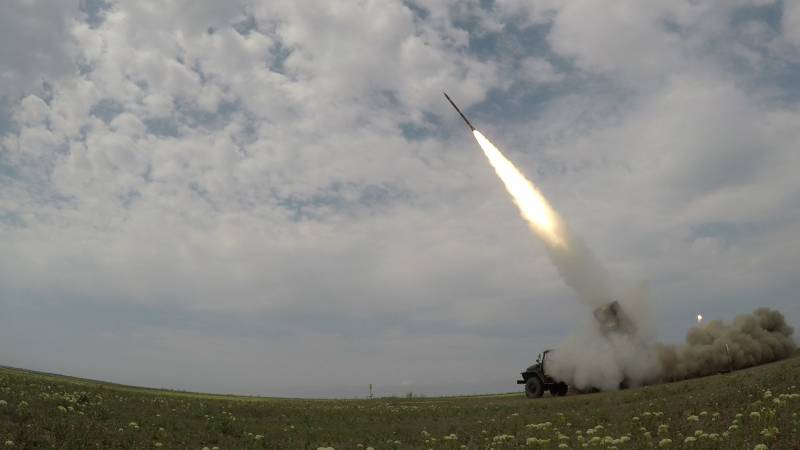 Currently, Ukraine mainly uses weapons samples inherited from the Soviet Union. Multiple launch rocket systems are no exception. The most common MLRS in the Ukrainian army is Grad. Without modernization, such a MLRS no longer meets the requirements of the XNUMXst century. It is for this reason that Ukrainian designers are working on the development of multiple launch rocket systems: both the creation of new and the modernization of existing models.

Many experts, including Ukrainian, agree that in the field of rocket artillery Ukraine is at least 20 years behind modern Russian multiple launch rocket systems, which are supplied to the Russian armed forces. First of all, this concerns the ammunition itself, in which, due to a change in rocket fuel, it was possible to significantly increase the range of destruction of targets. For example, the new ammunition of the Tornado-G MLRS is capable of hitting targets at a distance of up to 40 kilometers, which is 20 kilometers longer than the range of the shells of the conventional Grad complex. Currently, Ukraine is moving in the same way. The new Ukrainian program of modernization of multiple launch rocket systems is also named after the destructive atmospheric phenomenon and is known under the signature stamp "Typhoon".

On April 29, 2020, the roar of rockets at the Alibey Defense Ministry training ground located in the Odessa region marked a new stage in the testing of promising 122 mm Typhoon-1 caliber Ukrainian rockets designed for use with Grad MLRS, and also Ukrainian counterparts "Berest" and "Willow". The development of a new Typhoon-1 missile is carried out by the Yuzhnoye Design Bureau named after MK K. Yangel (Dnepropetrovsk). 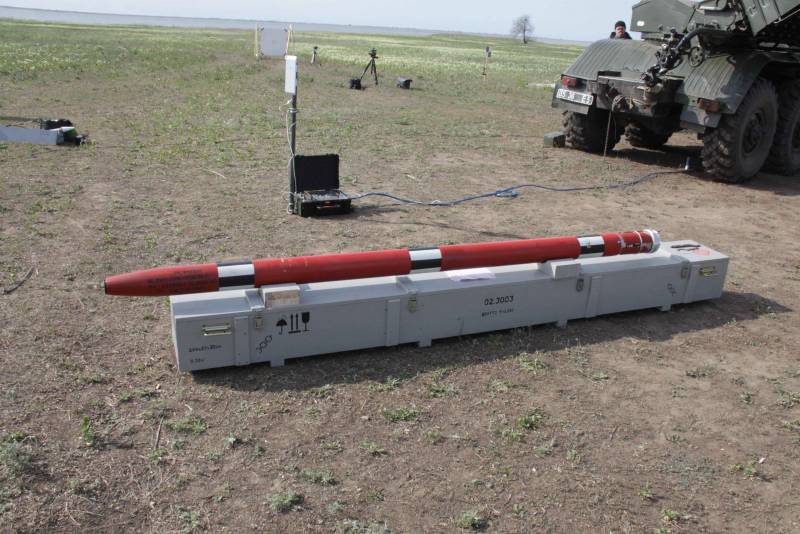 Test launches "Typhoon-1"
According to the official website of the enterprise, the launch of new rockets was carried out by the combat crew of the firing range using a standard combat vehicle BM-21 of the Grad complex. At the same time, the technical management of the launches of new shells was carried out by the specialists of the Yuzhnoye Design Bureau. It is reported that the test launches of rockets "Typhoon-1" were successful. It is noteworthy that earlier in Ukraine there was no production of rockets for the BM-21 Grad.

According to the Yuzhnoye Design Bureau, for the first time for such tests a ground-based complex of its own production was involved. The land mobile measuring station was used to obtain all the necessary telemetry information from the board of rockets during a flight in real time. It is reported that the test phase at the end of April 2020 at the Alibey training ground is the second for Typhoon-1 missiles. The first stage of the tests took place in November 2019 at a combined-range training ground located in the Dnipropetrovsk region. Last year, rockets were tested for the minimum flight range, in April 2020 - for the maximum.

It is known that the 122-mm Typhoon-1 missiles are a variant of the modernization of the classic BM-21 Grad ammunition. Similar work is carried out in many countries operating these volley fire systems. The new Ukrainian ammunition has a minimum flight range of 5 km and a maximum of 40 km. The mass of the high-explosive fragmentation warhead of the ammunition is 18,4 kg. In addition to the Typhoon-1 missile launcher, designers from the Yuzhnoye Design Bureau are also working on creating a guided ammunition of the same Typhoon-1M caliber, which can significantly expand the capabilities of Grad and its analogues. 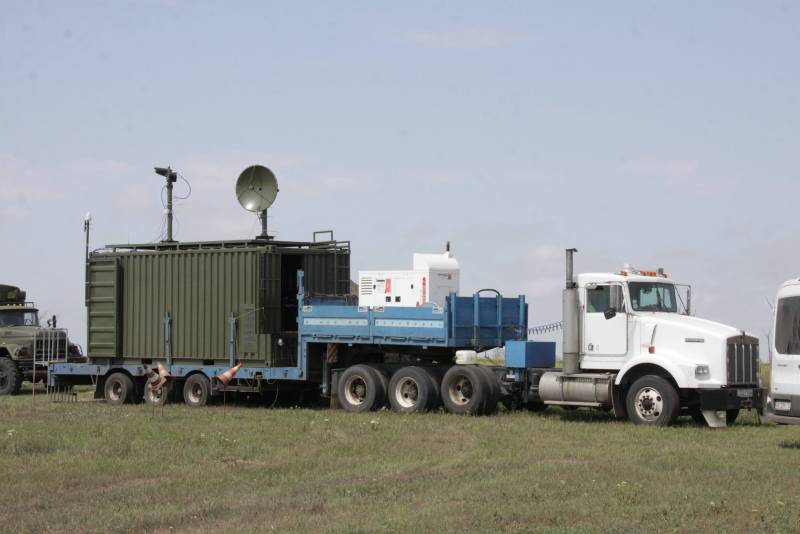 Test launches "Typhoon-1"
It is known that, in addition to specialists from the Yuzhnoye Design Bureau named after Yangel, a whole pool of Ukrainian representatives of the defense industry worked on the creation of a new Typhoon-1 missile. In particular, Southern Machine-Building Plant, NPO Pavlogradsky Chemical Plant and Pavlogradsky Mechanical Plant, NPK Fotopribor, State Scientific Research Institute of Chemical Products and several other Ukrainian enterprises have already been involved in work on the new ammunition.

The development of new Ukrainian rocket artillery ammunition has been known for several years. For the first time, CB Yuzhnoye presented its plans back in 2015 as part of the exhibitionWeapon and security 2015. " Then the company's specialists from Dnepropetrovsk presented a stand with options for upgrading the three main MLRS, which are in service with the Armed Forces of Ukraine: Grad, Hurricane and Smerch. The company also announced the start of work on the creation of new promising MLRS models.

Currently, it is known that the specialists of Yuzhnoye Design Bureau are working on several basic options for reactive systems and their ammunition:

"Typhoon-1" - a project to modernize the BM-21 Grad. The main difference will be an increase in the firing range of the complex to 40 kilometers instead of 20 kilometers in the Soviet RZSO.

"Typhoon-2" - a project to modernize the BM-27 "Hurricane". It is known that the firing range of 220 mm rockets will also be increased. The exact values ​​are unknown, but judging by the presentations, it is planned to bring the firing range to 72 kilometers.

"Typhoon-3" - a modernization project 9A52 "Tornado." The least known about this project so far. Perhaps it has been completely canceled due to the implementation of a similar project of the Ukrainian MLRS Alder, which is also being created on the basis of Smerch by the designers of the GKKB Luch.

Typhoon-4 is the most promising project at the moment. It is not a direct modernization of Soviet models, but a new development of engineers at the Yuzhne design bureau. The declared firing range is up to 280 km. In fact, this development is approaching operational-tactical missile systems. 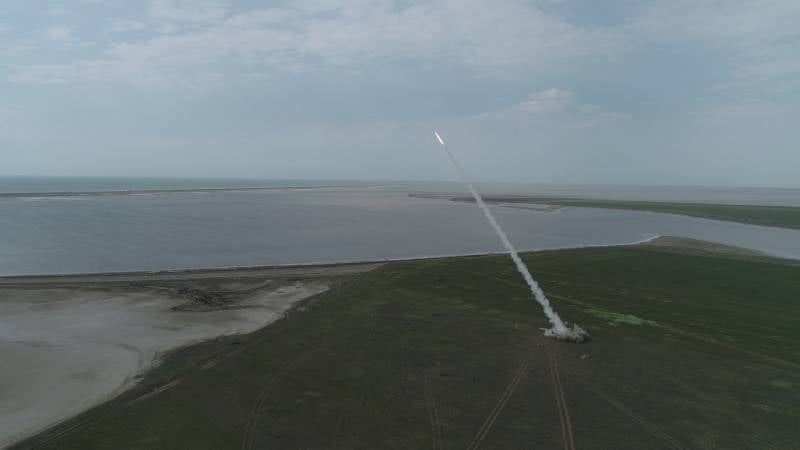 Test launches "Typhoon-1"
The main difference between the MLRS "Typhoon-4" is the launch of ammunition from transport and launch containers. Apparently, the caliber of the system will be increased to 400 mm. Indirectly, this can be judged by the renders and presentations already published on the Internet, as well as the work of specialists of the Yuzhnoye Design Bureau on solid propellant rocket engines for shells in caliber up to 400 mm. Another confirmation of the theory of increasing the caliber of ammunition is the declared firing range of 280 km. The basis for the new complex should be the wheeled chassis developed by the HCMB, which Ukrainians plan to use in the Grom-2 OTRK. The package deployment of missiles in the TPK is provided, similar to the modern Chinese MLRS or the Belarusian Polonaise complex.

The prospect of Ukrainian MLRS

First of all, the new Ukrainian MLRS of the Typhoon family are developed for internal use, but can also be exported. On the global arms market, they will compete with Russian MLRS and even Soviet equipment, attracting primarily buyers from developing countries. The fact that the project will ultimately be implemented is beyond doubt, it is only a matter of time. Perhaps it will not be possible to realize all of the planned, and the characteristics of missiles and systems will be adjusted, but the path to reducing the backlog from Russia in the development of MLRS will be maintained.

Ukraine inherited from the Soviet Union a developed defense industry and a good research and production base. At the same time, the developer of the Typhoon MLRS is Yangel Design Bureau Yuzhnoye, a large enterprise specializing in the development of rocket and space technology. Obviously, the enterprise has the personnel, and most importantly, the necessary theoretical and practical experience in the field of creating individual elements of rockets. It is known that the company is currently working on the creation of new solid-fuel engines for rockets with a caliber from 122 to 400 mm. For this purpose, Yuzhnoye Design Bureau has all the necessary technologies, as well as technologies for creating shells for rockets and missiles by the method of rotational rolling. 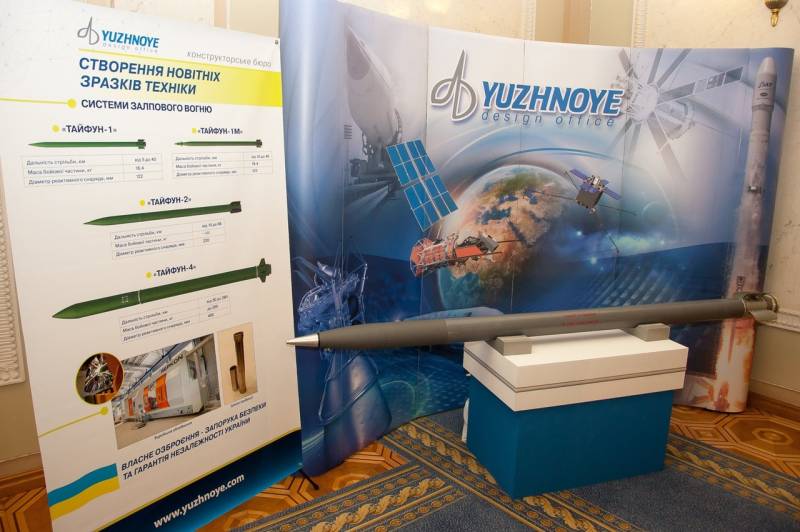 Variants of rockets from Yuzhnoye Design Bureau, photo: zloy-odessit.livejournal.com
Together, all this creates the prerequisites for real modernization and the creation of new models of already Ukrainian MLRS. At the same time, the main problem of Ukraine is not the lack of production sites and highly qualified specialists, but the chronic underfunding and low serialization of manufactured weapons and military equipment. In some cases, a great dependence on foreign components also remains, which increases the final cost of products. Another problem is that the Armed Forces, due to existing financial constraints, are not able to purchase military products and modern ammunition in large quantities. It is unlikely that the coronavirus pandemic and the global economic crisis will improve the financial and economic situation of Ukraine and its armed forces. In these conditions, the new Typhoon MLRS can remain single exhibition specimens for some time.