New to the Navy. Waiting for "Prince Vladimir" 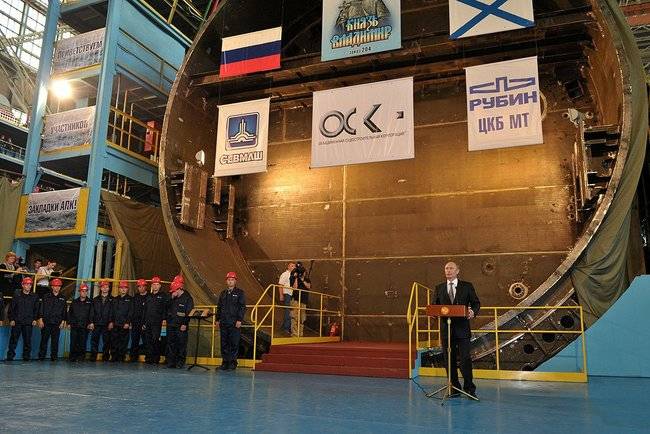 The construction of the Strategic Missile Submarine Cruisers (SSBN) project continues. The first three boats built on the original Ave. 955 have already been transferred the fleet and started the service. This year they will be joined by the lead ship of the new Borey-A Ave. 955A. Now the boat "Prince Vladimir" is completing the latest activities in the framework of the tests, and in the near future the deadlines will be announced.

By the end of the 955s, the TsKB MT Rubin, by order of the Navy, prepared an updated version of the existing project 955, which had a number of important differences. At the same time, work began on the Northern Machine-Building Enterprise PA to prepare a reserve for the construction of the lead boat. Initially, the laying of the first SSBN pr. 2009A was planned for XNUMX, but it was postponed several times.

July 30, 2012 at the "Sevmash" was held the long-awaited ceremony of laying the ship, named "Prince Vladimir". Construction continued until the fall of 2017.On November 17, the submarine was taken out of the boathouse and launched into the water. Soon factory tests began, followed by state ones. All such events took about two years.

"Prince Vladimir" successfully completed all the checks, confirming the calculated characteristics. Among other things, torpedo and rocket firing were carried out. Based on the test results, a list of the latest improvements required before being accepted into the fleet was compiled. 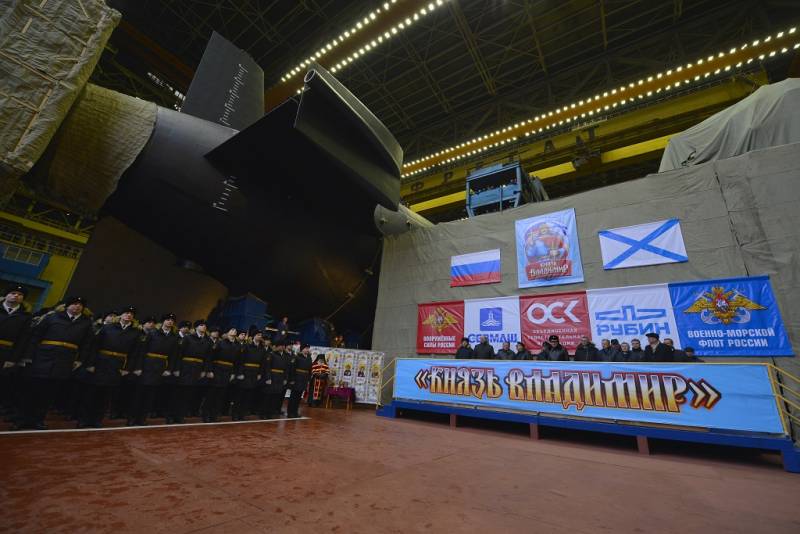 The ceremony of withdrawal from the boathouse, November 17, 2017. Photo USC / aoosk.ru
On May 16, the press service of the Northern Fleet announced a new stage of inspections. On May 12, “Prince Vladimir” began a control exit to the sea. The next test of running and maneuvering characteristics is carried out, as well as the results of the latest improvements are established. Based on the results of the control exit, the deadlines for the delivery of the ship and its subsequent entry into the Navy will be determined.

Earlier, there were reports in the domestic media about the possible surrender of the cruiser in June 2020. Recently, an unnamed TASS source indicated the possibility of shifting these terms to the left - at the end of May. Official data on this subject are not yet available, but it is already clear that the acceptance certificate will be signed in the very near future.

"Prince Vladimir" will be the fourth "Borey" in the Russian fleet. Moreover, he is the first representative of the new project 955A and therefore is of great interest. The updated draft strategic missile carrier has a lot of significant differences from the basic version, directly affecting the capabilities and characteristics. In addition, it is on pr. 955A that in the near future it is planned to build new SSBNs.

According to well-known data, pr. 955A represents a deep modernization of the original Borea, preserving some of the units and systems and replacing others. Due to this, an increase in the tactical and technical characteristics is achieved while reducing physical fields. In the past, at the rumor level, there was a possibility of increasing the main ammunition, but later it became known that the Borey-A will continue to carry 16 SLBMs. 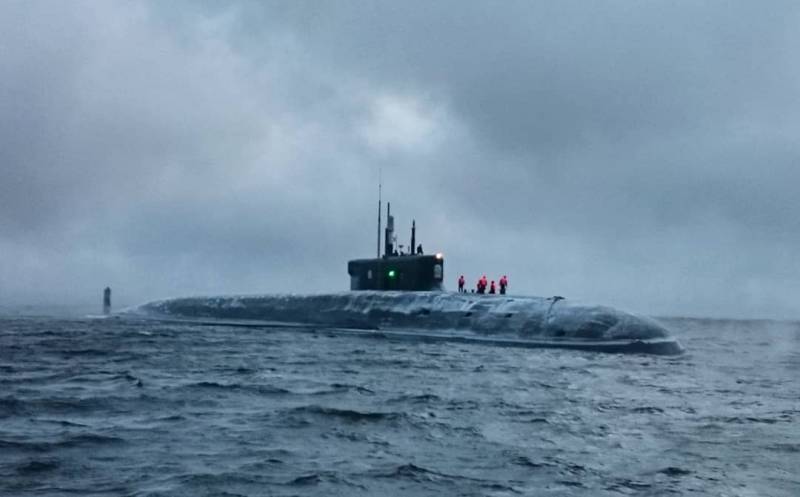 Submarine on sea trials. You can consider changing the shape of the hull and cutting. Wikimedia Commons Photos
During the upgrade, the rugged and lightweight hulls were changed. In particular, silo launchers are now fully inscribed in the contours of the light body and do not need a "hump". The form of the fencing fence has been changed. Such measures improved hydrodynamic characteristics, as well as reduced noise in the underwater position.

There is information about updating the combat information management system, communications and electronic warfare systems, weapons control systems, as well as other elements of avionics. The armament remains the same. 533 mm torpedo tubes were stored in the bow compartment, and the center of the hull was given to 16 R-30 Bulava missiles.

Etc. 955A also has interesting features in the context of the manufacturing process. During the construction of the first three Boreevs according to the initial project, the backlog of other types of nuclear submarines was widely used. Unfinished buildings, sections, etc. went into action. In the updated Borey-A project, finished products are not used, and submarines should be built from scratch. So, the groundwork for the future “Prince Vladimir” was created at Sevmash in 2009-2012.

Despite similar approaches to construction and related difficulties, work on the lead ship of the new project took a little more than five years. Previous SSBN base pr. 955 were built much longer. However, several factors led to the acceleration of construction, not only the features of the project being implemented.

"Prince Vladimir" in the ranks

Most likely, the new Borey-A will be handed over to the fleet no later than June, and by the end of summer they may raise the flag of the navy. The submarine "Prince Vladimir" will enter the combat structure of the Red Banner Northern Fleet and complement a number of other strategic submarines. 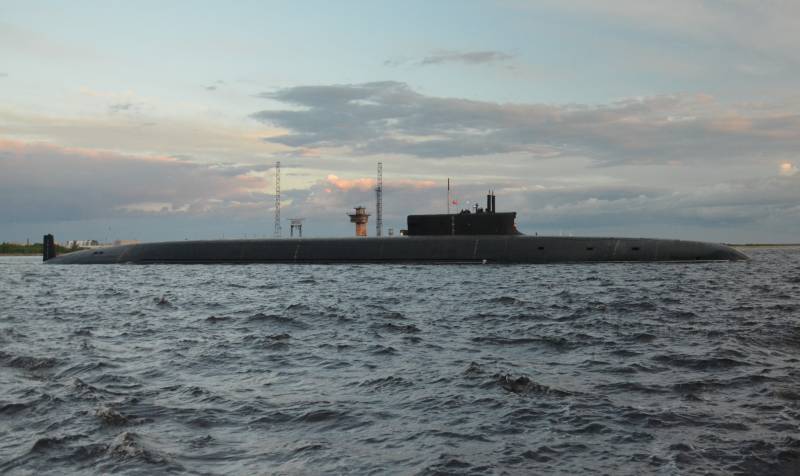 New profile inherent in pr. 955A. Photo Bmpd.livejournal.com
At present, the KSF has five SSBNs, pr. 667BDRM Dolphin. Another ship is under repair. Since 2012, he has been serving the lead Borey - K-535 Yuri Dolgoruky. In the coming months, the number of combat submarines of Project 955 (A) in the KSF will double - although it will remain small compared to other combat units.

Thanks to "Prince Vladimir", the Northern Fleet will be able to keep on duty 16 additional Bulava SLBMs and up to 100-160 nuclear warheads. Also, the capabilities of the KSF submarine forces for the organization of combat duty, including in remote areas. In general, the receipt of a new submarine, Project 955A, will have only positive consequences for both the Northern Fleet and the Russian Navy - and with them for all the armed forces.

The beginning of a new series

K-549 "Prince Vladimir" is the lead ship of Ave. 955A, and new ones should follow. According to the last news, now preparing for launching the first serial "Borey-A" - "Prince Oleg." It can be delivered to the customer before the end of this year. At various stages of construction are the Generalissimo Suvorov, Emperor Alexander III, and Prince Pozharsky. The fleet plans to accept them in 2022-24. There is a contract for two more submarines.

As before, the new Boreas-A will be distributed between the Pacific and Northern Fleets. According to the results of the implementation of all concluded contracts, they will include five modern SSBNs. The basis of such submarine forces will be newer ships of the project 955A. 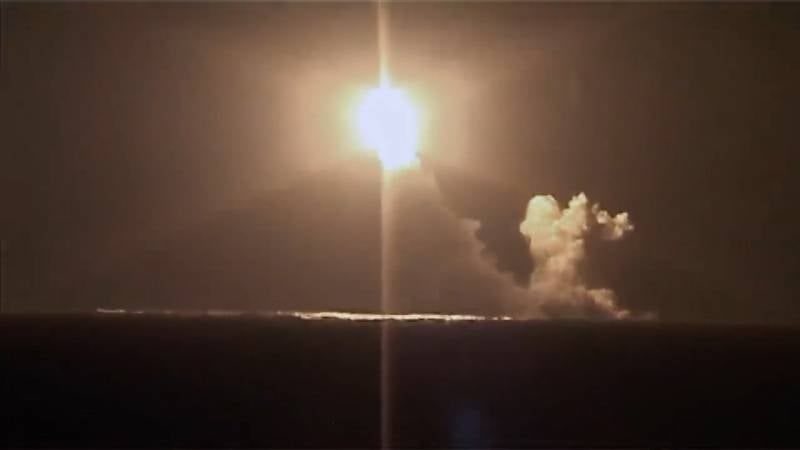 Launch of the Bulava rocket, October 30, 2019 Photo by the Ministry of Defense of the Russian Federation / mil.ru
Then, new orders are expected to appear, bringing the total number of submarines to 14 units. On what project new ships will be built - it is unclear. Perhaps the continuation of work on pr. 955A or the creation of a new modification of such a "Borea" with one or another advantage.

As new Boreevs arrive, the Russian Navy will be able to gradually write off obsolete SSBNs that have exhausted their resources. In the distant future, it is precisely the submarines of Project 955 (A) that will bear the entire responsibility of maintaining the naval component of strategic nuclear forces. A similar state of affairs will continue for several decades - until the advent of a new project of submarine missile carriers.

The current plans for the development of the naval component of the strategic nuclear forces cover the next several decades, and their basis is precisely the ships of new design and construction. A special role in these processes is played by the current project 955A Borey-A. Previously, it was successfully brought to the construction of the lead ship, which has already passed the necessary tests. Over the next few weeks, the navy will accept Prince Vladimir, and this will open a new page in stories submarine forces.

We are in Yandex Zen
About the latest “Borea”, “Bark”, “Mace” and a little about “Borea-A”
"Svetlana". History of creation
32 comments
Information
Dear reader, to leave comments on the publication, you must to register.