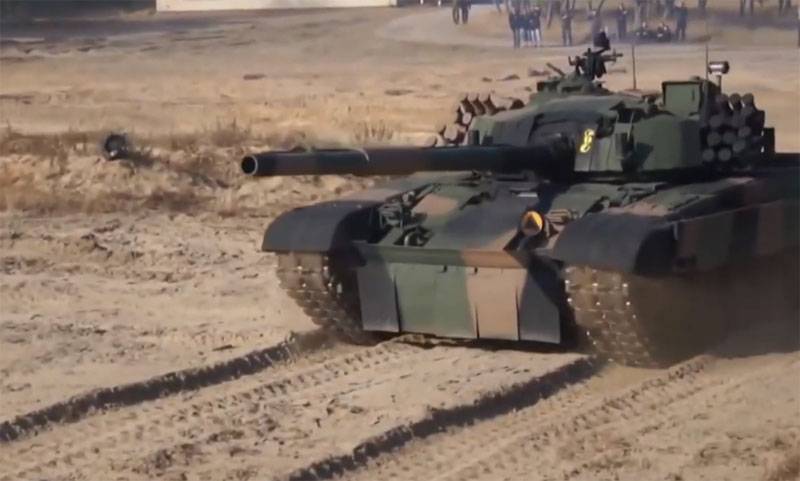 Today, when the situation in the world is extremely tense and only the lazy does not speak about the possibility of starting a new world war, there was talk about the shortsightedness of our military, about the stupidity of our designers, who "go the old way" by creating new armored vehicles, rather than modernizing already available tank fleet.


I’ve read several times that the widely publicized T-14 turned out to be zilch. There is no money in the country and therefore this machine will never be mass-produced. At the same time, the countries of the West again give us an example. It is there that they are engaged in the constant modernization of their combat vehicles. Moreover, the authors of such publications are not at all embarrassed by the fact that in a combat situation, when all innovations are tested in battle, modernized cars burn for a sweet soul.

Supporters of such ideas pay particular attention to the modernization of our old tanksof which there are a huge number in the countries of the former socialist camp and which in some countries were even issued under the license of the USSR.

Alas, for most countries of the world, even with a fairly developed economy, the development and production of new machines is not always a feasible task. A modern machine requires huge investments already at the initial stage of design. And the creation of new industries is generally fantastic. But I really want to have cars that can perform tasks on the battlefield today.

This is one of the reasons why designers and engineers are tasked with improving the combat properties of existing tanks.

Another reason for modernization is the variety of equipment that is in service with its own army. By the way, it was this reason that became the engine of the first modernizations of our tanks. Most experts know that the Israelis were the first to start such modernization, who after the 1967 war received huge trophies, including several hundred Soviet T-54/55 and T-62.

To let such an amount of military vehicles “under the knife” is stupid. Therefore, the decision to standardize weapons, including tanks, looks quite logical. And the USSR at that time was not very keen to provide captured tanks with spare parts and ammunition for tank guns.

There is another reason that looks strange, but this reason is an incentive for many upgrades. Modern combat vehicles, which in developed countries look like an anachronism, have excessive combat capabilities. These machines are intended for use by specialists who need to be trained long enough.

Moreover, the matter is not only about representatives of some wild African tribes, for whom even a tractor is exotic. We are talking about people who fit perfectly into the modern world. Remember history Great Patriotic War? When a tractor driver was drafted into the army and after a short training, the tank units received a tank driver or self-propelled guns.

Today, the "tractor driver" will be able to control the tank, but it is unlikely to use all the equipment of the combat vehicle. Those who have served in the Soviet Army today still remember the red button with the inscription PAZ, about which everything seems to be known, but only a few had the chance to press it. There are and are. But you can’t touch it otherwise the commander will take his head off. But such buttons, levers, taps, handwheels in the tank is enough.

You can talk about good, professional upgrades for a long time. In this article I do not set myself the task of telling about this side of the issue. Almost all models of Soviet military vehicles were modernized. Moreover, in some cases, the cars really became different.

In order not to be unfounded, I will give an example of the modernization of the “champion” of the American rating (according to NI magazine) T-55 in Israel. Again, simply because the Israelis did it first.

I immediately apologize to the specialists for the incomplete enumeration of the modernization of the Israeli machine. So, in 1984, the Israelis first showed the tank "S". Outwardly, it is difficult to recognize the T-55 in this car. Changing the tower, canopies on the hull, many additional devices on the armor, storage boxes for crew things welded to the tower, the barrel of the gun with thermal protection ... However, this is it, the old man T-55.

The power plant was replaced earlier and tested on Ti-67 machines (modernization of the T-54). The American diesel 8V-71T was used.

Moreover, the armament and protection of the tank are enhanced. The tank’s gun also became American. 105-mm American rifled gun M-68 (American version of the English gun L7). Browning machine guns installed. To the left of the tower installed a 60-mm mortar. In addition, the tank was equipped with elements of dynamic protection "Blazer".

Agree, this modernization really significantly increased the combat power of the tank.

The collective farm is voluntary

Many readers today laughingly recall the expression commonly used in the USSR - “Ukraine is the breadbasket of the USSR”. Today, given the state of agriculture in a neighboring state, it looks really funny. But as citizens of the USSR, we well remember this slogan. The situation is similar in tank building. True, this concerns not only Ukraine, but also several countries of the former socialist camp.

The fact is that our main tank T-72 was the main one in these countries. Naturally, enterprises were created there that produced this car or assembled tanks from Soviet components.

After the collapse of the USSR and the victorious procession of capitalism in Eastern Europe, all these plants began independent production and modernization of the Soviet T-72. T-72 tanks were officially produced in Poland, Czechoslovakia and Yugoslavia.

Talk in detail about what happened for a long time. Yes, and not very interesting. Just because it turned out that the tank is a rather complex machine in which all units are interconnected and efficient only in assembly. Therefore, I will simply name the cars that appeared at the end of the 20th and beginning of the 21st centuries on the basis of the T-72.

Poland. The most interesting tank is the PT-71 Twards. Created with active cooperation with Western companies. The machine is interesting in that it uses two engine options at once. 850-strong and 1000-strong. However, a 1000-horsepower diesel engine was recognized as unnecessary and the Poles settled on an 850-horsepower one.

Slovakia. After the collapse of Czechoslovakia, problems began at the ZTS factory in the Slovak city of Tručany. However, Western firms helped. In particular, the French and Dutch. In 1994, the Slovaks showed their own T-72 M2 "Modern". The car looks great due to the fact that containers with 20 mm automatic guns are installed on the sides of the hull.

Yugoslavia. The Yugoslav T-72 was originally equipped with its own fire control system and therefore was produced under its own "name" -T-84. The release of tanks involved firm Dzhuro Dzhakovich. The most interesting example of the T-84 is a car with reinforced armor, which has been adopted by Croatia under the T-95 Degman index.

The most unusual T-72 came from Romania. I do not want to say anything about local traditions, but this is a country that decided to just steal the T-72 and create its own car on its basis. Remember the concept of "gypsy gold"? The Romanian T-72 is precisely this “gold”. TR-125 (that's what the Romanian tank is called) for some reason did not fit on 6 road wheels. Therefore, this tank is an original, 7-roller.

India. The long-standing love of this country to buy equipment along with the technologies of its production allowed to create its own tank factory in Avadi. The Indian tank is almost no different from the Soviet T-72M1. However, modernization continues.

Ukraine will wipe the nose of Russia ...

Well, the most interesting option for us to modernize the T-72 is of course Ukraine. For some reason, we decided that the tank crisis in this country began after 2014. But this is far from the case. The crisis began exactly when the USSR collapsed.

And the understanding that the scientific and technical potential of Ukrainian design thought is not enough not only for the production of new vehicles, but for the modernization of old ones, it was clear to the Kharkov Tank Plant specialists back in the 90s of the last century.

For some reason, we forgot 1999, when Kharkiv presented the modernized T-5 MI72 at the 1th International Exhibition of Arms and Technology, created in active cooperation with the French and Czechs. And the car was worth inspecting. At least because of the 1000-horsepower diesel engine and the Sawan-15 self-propelled guns.

The project "stalled" simply because for the real interest of buyers in this tank it was necessary to completely change the tower. The reason is a carousel automatic loader, which performed poorly in the Chechen war. To install the western version of the MOH, it is necessary to increase the tower at the back. And this, automatically, violates the alignment of the machine and its performance characteristics.

Currently, the modernization of tanks for environmental protection is more "collective" in nature. 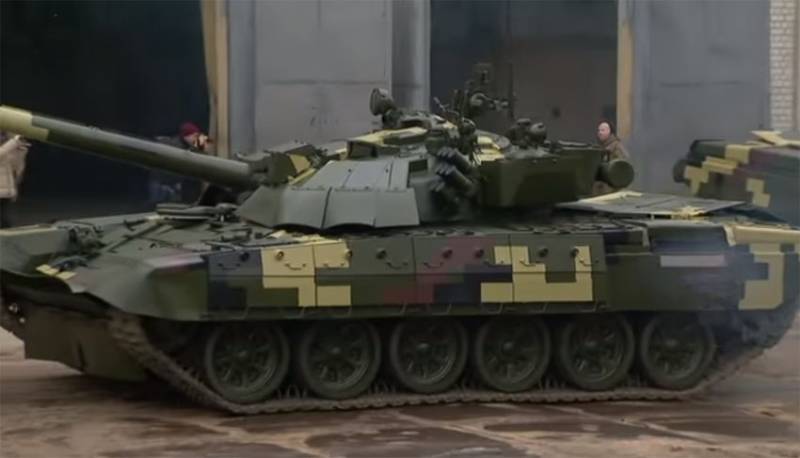 Tank builders just look at what the front-line soldiers do in Donbass and implement these inventions at the factory. That's why Ukrainian tanks in the Donbass look so exotic.

The latest brainchild of tank builders was the T-72AMT. By the way, talk about this miracle tank has been going on since 2017. The tank is nothing special. Probably besides the engine. 1000-horsepower diesel. Judging by the photo published by the Ukrainian media, the most interesting thing about this car is the rear-view mirrors and aft cameras ...

I am opposed to the economic approach to the defense of the state. “It’s better to give ice cream to grandfathers than to invent a new tank or plane” for me is unacceptable. Let’s do this, we’ll get the chance of not finding grandfather at all after the bombing. It is necessary to save, but not in what the life of the state and the life of citizens of the state depend on.

Someone doubts that the modernization of the T-72, which is currently being carried out in the Russian army, is a necessary measure. Does anyone have doubts that the T-14 is better than the T-72? Maybe someone thinks that our main tank can be “brought” to “Almaty”?

The questions are stupid. It is clear that the answers to these questions are unequivocally the same. A new tank is better. But here supporters of "ice cream for grandfathers" and the military of other specialties come into play. Everyone needs money now. And the capsule of the state is not rubber.

The resource of any tank, including in matters of modernization, is limited. You can endlessly change sights, thermal imagers, attachments, but the car will not improve much from this. And then, in the first battle, we will see many bonfires to which our people will die.

Today we are in a rather difficult situation. On the one hand, China has one and a half billion people. On the other hand, the EU, the USA. And we are with 145-147 million. So do not "give birth to women more" in which case. Our one will cost five not ours at least.

We are in Yandex Zen
About Stalin and Khrushchev
What you didn't want to know about England
50 comments
Information
Dear reader, to leave comments on the publication, you must to register.