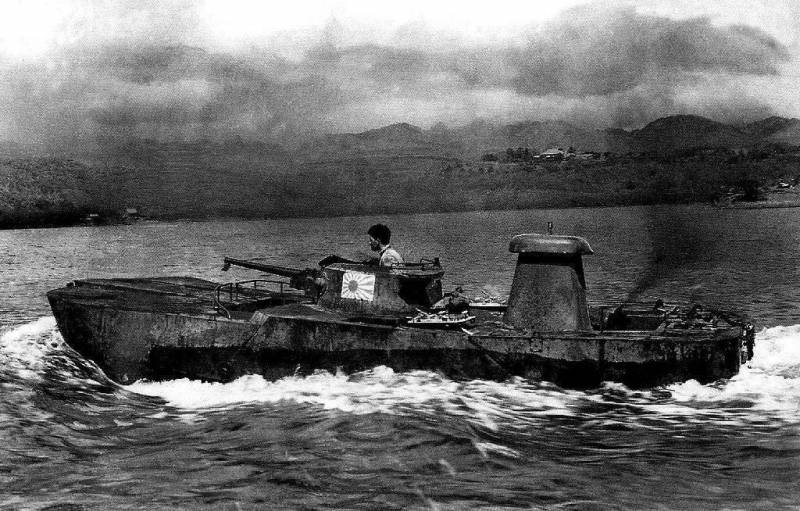 The peculiarity of the formation of Japanese armored forces was that Tanks, ineffective in the war on the islands, played a secondary role in the structure of the army. Nevertheless, it was also impossible to neglect weapons so important for this period. Back in the 1920s in Japan, work began on the creation of a floating tank, adapted to perform landing operations on the islands.

On land and at sea

Initially, Japanese designers followed the path of European colleagues, developing machines that remained afloat due to the large displacement hull. However, the test of such machines each time gave extremely unsatisfactory results. The seaworthiness of these tanks was very low, and even a slight disturbance at sea could become fatal for them. Due to the large dimensions of the hull on land, such machines turned out to be clumsy and seriously inferior to their land counterparts in armor and weapons.

Everything changed in 1941, when the Mitsubishi company introduced the prototype of the KA-MI tank. When developing this machine, the company's specialists abandoned the generally accepted scheme with a large displacement body. Instead, buoyancy was ensured by large steel pontoons that were attached to the front and rear of the tank. The shape and size of the pontoons gave good seaworthiness, making the machine suitable even for prolonged sailing in turbulent waters. On land, dropping the pontoons, the tank enters the battle as a land.

Undoubtedly, the KA-MI water-floating tank was an outstanding achievement in Japanese tank construction. However, the machine intended for offensive operations appeared too late, when Japan had already switched to defense, and the KA-MI crews could not realize all the advantages of the tank.

The baptism of fire "KA-MI" took place at the end of 1942 in the battle of Guadalcanal, in which the tanks "HA-GO" also participated. A sufficient number of KA-MI appeared in the troops only in 1943. One of the few episodes with the mass use of KA-MI tanks was the night landing operation from June 15 to 16, 1944 on the island of Saipan to attack American troops, which began landing on the island. During the operation, a group of KA-MI tanks succeeded in landing on the enemy’s flank. However deprived aviation and the artillery support of the machine could not be opposed to the US troops who managed to regroup.

In the future, until the end of the war, the main task of the KA-MI floating tanks became raids on the enemy rear, which did not bring significant results. Tanks were also used in the defense of Iwo Jima and Okinawa, when, like most other poorly armored Japanese armored vehicles, they were used as fixed firing points, remaining buried in the ground.

To date, ten samples of this tank have been preserved. Seven of them, damaged in battle and abandoned by crews, are scattered across the islands of the Republic of Palau. They all stand in the open air and are in poor condition. The remaining three copies are stored in Russia: in the Central Museum of Armored Arms and Equipment in Kubinka, as part of an exposition of military equipment and engineering structures in Victory Park in Moscow and on the island of Shumshu of the Kuril chain.