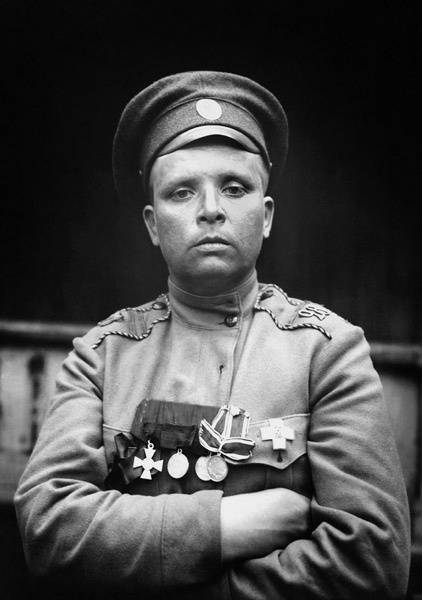 100 years ago, on May 16, 1920, Maria Bochkareva, nicknamed the Russian Joan of Arc, was shot. The only woman who became the complete St. George Knight, creator of the first stories Russian women's battalion.

Maria Leontyevna Bochkareva (Frolkova) was born in July 1889 in a peasant family in the village of Nikolskoye in the Kirillovsky district of the Novgorod province. A few years later, the family moved to Siberia in the "Stolypin" carriage - many landless and low-land peasants received large tracts of land beyond the Urals free of charge.

In Siberia, the family did not stand up. Mary knew poverty; she worked from an early age. She was distinguished by great physical strength and even worked as an asphalt paver. At 15, she married Afanasy Bochkarev, but unsuccessfully. She fled from her drunken husband from Tomsk to Irkutsk. Lived with a civil husband - J. Buk. But she did not find happiness with him either. The butcher husband turned out to be a robber, he was caught sent to exile in Yakutsk. Bochkareva followed him to Eastern Siberia. The butcher did not recover, he opened a butcher's shop, but in fact joined the gang. He was again exposed and exiled even further to the taiga village of Amgu. Mary followed him. The man washed down, began to beat Bochkarev.

At this time, a world war began. Maria Bochkareva decided to dramatically change her life: to join the army. She recalled: “My heart was torn there - into the boiling cauldron of war, to be baptized in fire and hardened in lava. I was possessed by the spirit of self-sacrifice. My country called me. " Arrived in Tomsk, but she was refused there, advised to go to the front with a sister of mercy. Then Maria sent a telegram personally to Emperor Nicholas II. Her request was granted and enlisted in the army.

In February 1915, after three months of training, Maria Bochkareva was at the forefront in the 28th Polotsk Infantry Regiment. At first, her presence among the soldiers caused only laughter and ridicule. However, a strong and brave girl quickly earned authority among her colleagues. Bochkareva carried the wounded from the line of fire, participated in bayonet attacks and went into reconnaissance. The brave woman became a legend of the regiment. She was considered her own, nicknamed Yashka - in honor of the non-prolific friend Jacob. After countless battles and four wounds, she was marked with all four degrees of the cross of St. George and three medals. He was promoted to senior non-commissioned officer and commanded a platoon. 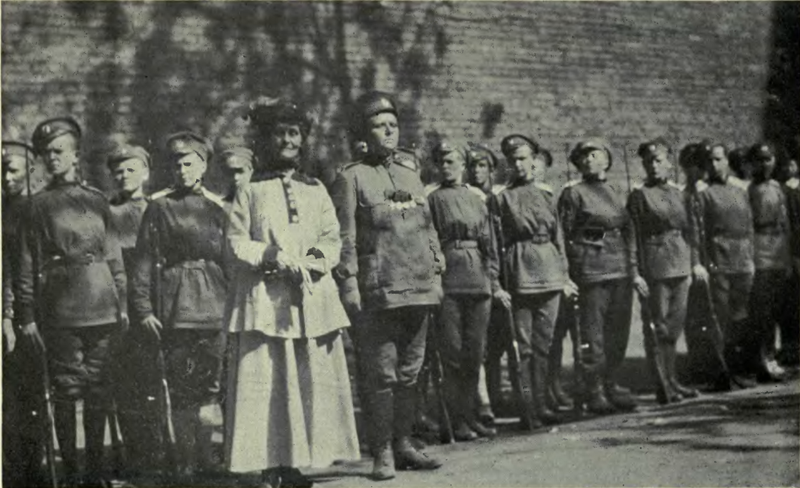 Maria Bochkareva, Emmeline Pankhurst and soldiers of the women's battalion

In February 1917, a revolution occurred. Emperor Nicholas II was overthrown and arrested. The first Provisional Government was headed by Prince Lvov. The processes of decomposition of the army, which were already in tsarist times, sharply intensified. Mass desertion, drunkenness, rallying, the soldiers' refusal to fight, the killing of officers, etc. Fighting became increasingly difficult. At the same time, the Provisional Government continued to maintain the position of continuing the “war to a victorious end” in the Entente. The authorities began to look for ways to preserve the army and the front. In particular, they organized shock battalions from soldiers, veterans, and St. George cavaliers who remained combat-ready. We also decided to organize women's battalions to raise the morale of soldiers.

One of the leaders of the February Revolution, Mikhail Rodzianko, visited the Western Front in April 1917, where Bochkareva served. Mary was one of the most popular personalities at the time. She greeted February enthusiastically, but did not accept the decomposition of the army, which was turning into a "talking room." They decided to use her authority to create a women's battalion. Rodzianko took her to Petrograd to campaign for a “war to a victorious end” among the units of the Petrograd garrison and among the soldiers’s deputies of the Petrosoviet. At a speech to the soldiers' deputies, Bochkareva suggested forming shock women's death battalions.

The interim government approved this idea. Bochkarev was taken to the Supreme Commander-in-Chief Brusilov. As M. Bochkareva recalled, the commander in chief doubted:

“Brusilov told me in the office that you rely on women and that the formation of a female battalion is the first in the world. Can women disgrace Russia? I told Brusilov that I myself am not confident in women, but if you give me full authority, I guarantee that my battalion will not disgrace Russia ... Brusilov told me that he believes in me and will try his best to help in the formation of a female volunteer battalion ".
On June 21, 1917, a solemn ceremony of presenting the new military unit of the white banner with the inscription "The first female military command of the death of Maria Bochkareva" took place on the square near St. Isaac's Cathedral. Members of the Provisional Government and generals escorted the battalion to the front. Non-commissioned officer Maria Bochkareva, for the first time in the history of the Russian army, adopted a combat banner. General Kornilov handed the commander a revolver and a saber. Kerensky promoted Bochkarev to officers and attached the shoulder straps of the ensign.

Similar parts were created in other cities, in particular, in Moscow and Yekaterinodar. The Russian public was shocked at first, but then actively supported the patriotic cause. More than 1 thousand people wanted to join the 2st Petrograd Women's Battalion alone. About 500 were rejected. As a result, the majority was eliminated, about 300 women remained. The social composition was diverse: from "educated young ladies" - noblewoman, student, teacher, etc., to soldiers, Cossacks, peasant women and servants. The discipline was tough. Bochkareva did not differ in her peaceful disposition. They complained about her that “she’s beating her faces like a real leader of the old regime”. All command posts were occupied by men, since there were practically no female officers (by the fall of 1917, only 25 women had completed the full course of the military school program at the Alexander Military School in Moscow).

At the end of June 1917, the Bochkareva battalion arrived at the front — the 10th Army of the Western Front in the area of ​​the city of Molodechno. The battalion became part of the 525th Infantry Regiment. The “democratized" troops have already completely decomposed. Female drummers were met as prostitutes. The battalion commander recalled: "... that I had never before met such a tattered, unbridled and demoralized shantrap called the soldiers."

In July 1917, the Western Front tried to advance, and the percussionists took the fight. They fought bravely, attacked and repelled enemy counterattacks (at the same time, most of the corps rallied). Colonel V.I. Zakrzhevsky in his report on the actions of the women's battalion wrote:

“Bochkareva’s detachment behaved heroically in battle, all the time in the front line, serving along with the soldiers. ... with their work, the death team set an example of courage, courage and peace, raised the spirit of soldiers and proved that each of these women heroes deserves the title of warrior of the Russian revolutionary army. ”
The strikers, who basically had no combat experience, suffered heavy losses: 30 killed and 70 wounded - a third of the composition. Maria Bochkareva received another wound, spent a month and a half in the hospital and received the rank of second lieutenant, then lieutenant. Under pressure from the army and the high casualties of female volunteers, the new Supreme Commander-in-Chief, General Kornilov, banned the creation of new female battalions. Existing units had to perform auxiliary tasks (security, communications, nurses, etc.). As a result, the movement fell apart. Russian Joan of Arc could not save the army from the final decay.

It is worth noting that most of the front-line soldiers received women's battalions "with hostility." It was believed that women corrupted the army. The soldier councils believed that this was a way of waging a “war to the end”. General Denikin noted:

“Let us pay tribute to the memory of the brave. But ... there is no place for a woman on the fields of death, where horror reigns, where there is blood, dirt and deprivation, where hearts become hardened and morals are terribly rude. There are many ways of public and public service, much more consistent with the calling of women. ” 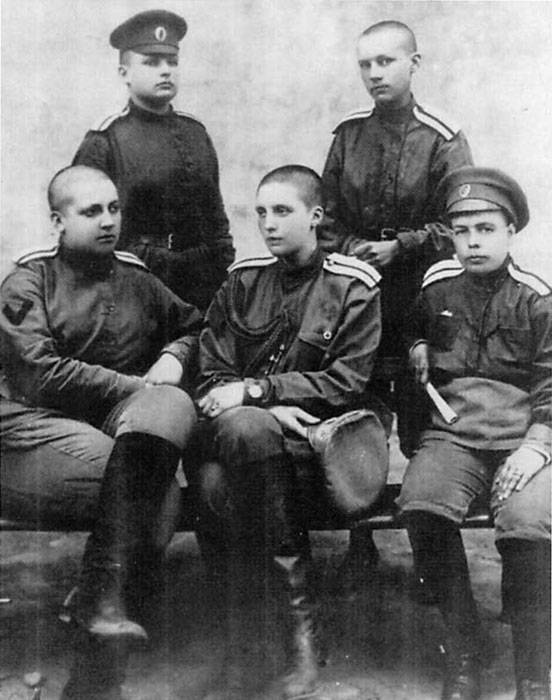 The leadership of a military formation. Summer 1917. In the photo M. Bochkareva sits on the far left

In connection with the final collapse of the front and the October Revolution, Bochkareva disbanded the remnants of the battalion (the 2nd battalion in Petrograd took part in the defense of the Winter Palace, then was also disbanded). The personality of Mary was popular among the people, so both red and white tried to attract her to her side. Lenin and Trotsky convince her to take the side of the people. Obviously, Bochkareva, whose head turned popularity, did not understand the situation. Although with the Bolsheviks, she could achieve great heights. Through an underground officer organization, Maria establishes contact with General Kornilov. Bochkareva decides to help the White movement. She was detained on her way to Siberia. Bochkarev was accused of collaborating with General Kornilov and was nearly sentenced. However, broad connections helped. She was released, and Mary, dressed as a sister of mercy, traveled the whole country to Vladivostok.

From the Far East, as a personal representative, General Kornilova left for a campaign trip to the United States and Europe. She was supported by prominent members of the Western public and the suffragist movement (movement to grant women suffrage). In particular, British public and political activist, women's rights activist Emmeline Pankhurst, American suffragist Florence Harriman. Arrived in America, in July 1918, it was received by President Woodrow Wilson. Bochkareva spoke about her life and asked for help in the fight against Bolshevism. The journalist Isaac Don Levin, based on Maria’s stories, wrote a book about her life, which was published in 1919 under the name “Yashka”. The book was translated into several languages, was very popular.

In England, Maria Bochkareva met with King George V and Minister of War W. Churchill. She requested financial and material assistance for the White Army. In August 1918, along with the British interventionists landed in Arkhangelsk. She planned to form women's volunteer units in the North of Russia. However, things did not go, the commander of the Northern Region and Northern Army, General Marushevsky, reacted coldly to this project. He even forbade Bochkareva to wear an officer uniform.

In the fall of 1919, the British evacuated from Arkhangelsk. Bochkareva decided to try her luck in Kolchak’s army, made her way to Siberia. On November 10, 1919, Admiral Kolchak received the Russian Joan of Arc and agreed to the formation of a female military sanitary unit. However, the Kolchakites were already defeated, so they did not manage to create anything worthwhile. In winter, Kolchak’s army was destroyed: partly captured, partly fled.

In January 1920, Bochkarev was arrested. In conclusion to the final protocol of her interrogation of April 5, 1920, investigator Pobolotin noted that "Bochkareva’s criminal activity against the RSFSR was proved by the investigation ... I believe that I want Bochkarev as the implacable and worst enemy of the workers and peasants’s republic at the disposal of the head of the Special Division of the Cheka of the 5th Army." At first they wanted to move her to Moscow, but on May 15 they revised this decision and on May 16, 1920 Maria Bochkareva was shot in Krasnoyarsk. In 1992 she was rehabilitated.

In Soviet times, they tried to forget Yashka. They only remembered the "fools of Bochkarevsky" (scornful lines by Mayakovsky) who tried to defend the Winter Palace. However, on the whole, the personality and fate of Maria Bochkareva is very entertaining: a simple peasant, who had mastered the basics of literacy only towards the end of her life, met on her rather short life path not only the first persons of Russia (Rodzianko, Kerensky, Brusilov, Kornilov, Lenin and Trotsky), but and the West (with US President W. Wilson, British King George V). This is only possible in troubled times. 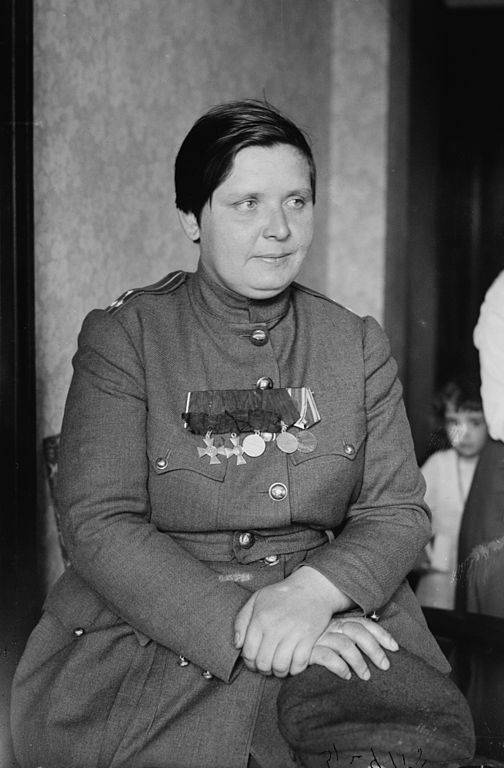