Strange little shuttle: why does the Pentagon launch the X-37B again 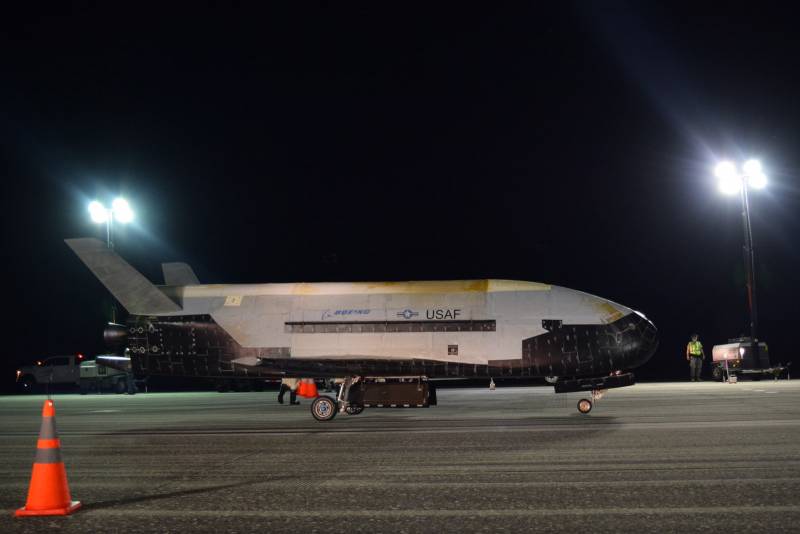 The threat from space

May 16, the American Atlas V booster rocket (the one that uses the Russian “engine of discord” RD-180 in the first stage) will launch an experimental spacecraft from the launch site at Cape Canaveral X-37B. This will be the sixth launch of the spaceship and one of the most important in its short-lived stories. “There will be more experiments on board than during previous X-37B flights,” US Air Force Secretary Barbara Barrett said earlier in a video conference hosted by the Space Foundation.

The fact is that within the framework of the new mission, the device will be launched for the first time with a service module, without which the X-37B cannot be considered “full-fledged”. In general, the X-37B can be called without exaggeration the most mysterious spacecraft of our day, generating almost conspiracy theories. Recall that a few years ago, with the filing of the current head of Roskosmos, Dmitry Rogozin, the X-37B became a potential "weapons mass destruction.

“We will accordingly avoid any public statements, but we are well aware that this can happen, and it is likely that weapons of mass destruction, if, God forbid, it will be placed in space, can be planned from above.”
- said then the head of the space department of the Russian Federation.

Partly the Americans themselves are to blame for the formation of such an image: they have long concealed the purpose of the X-37B and now probably also do not tell the whole truth.

What is generally known about this orbital plane? Previously, the apparatus was not (at least formally) part of any major military projects. Back in the late 90s, Boeing and NASA began work on it. Then financial problems made themselves felt, and the project was transferred to the defense research agency DARPA. The X-37A, which was built as part of the updated program, has never flown into space, and in 2006 the US Air Force announced that they would now conduct the project: from now on it received the name X-37B Orbital Test Vehicle. The official goal of the program is the development of reusable technologies.

Regardless of the tasks set, the X-37B has every reason to be proud. A small nine-meter device has already made five successful starts and successful returns: it was launched four times using Atlas V, one using Falcon-9. As part of the fourth launch, he set a valid record for himself, having stayed in orbit for 718 days. As part of the first mission, the spacecraft stayed in orbit "only" 224 days.

As you can clearly see, we are talking about really long missions, during which you can catch a lot. What will the X-37B do now?

I must say, the US authorities described the goals and objectives of the mission, not forgetting to mention the great role of the experiments.

“Each launch represents a significant milestone and a step forward in terms of how we rapidly create, test and deploy space systems,”
- said the commander of the US Space Forces, Air Force General John Raymond.

It is reported that as part of the new mission, NASA will study the effect of radiation and other phenomena on samples of seeds and plants that can be eaten. The Pentagon also said that the orbital plane will deliver into space a small satellite FalconSat-8, which was developed by the US Air Force Academy. It is assumed that he will allow for five experiments. In fact, this is an educational platform. 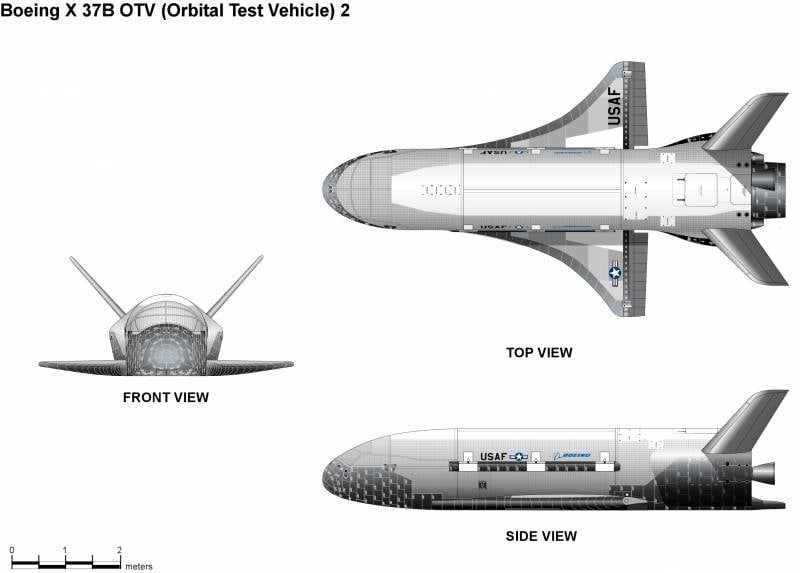 Of much greater interest is another experiment that will be conducted in the interests of the US Navy Research Laboratory. It is about converting solar energy into radio frequency microwave energy, followed by studying the possibility of its transmission to Earth. According to experts, this area promises great opportunities in the future, including in the military sphere. As noted by The Drive in X-37B Space Plane's Microwave Power Beam Experiment Is A Way Bigger Deal Than It Seems, such technologies can provide an almost “unlimited” lifespan for unmanned aerial vehicles and satellites.

It is noted that back in 2019, specialists of the Research Laboratory fleet conducted a ground-based experiment, during which energy was successfully transferred with a capacity of two kilowatts to a distance of 300 meters. And during the tests conducted in May 2019, the infrared laser successfully transmitted 400 watts of power to a distance of 325 meters. The very first phase of the project was completed several years ago: then the energy was transmitted via cable to the submarine.

According to Dr. Paul Jaffe, an engineer at the US Navy Research Laboratory, the technology will open up completely new frontiers in terms of the use of unmanned aerial vehicles. “If you have an electric drone that can fly for more than an hour, you're fine,” Jaffe says.

“If we had a way to make drones fly endlessly, this would have far-reaching consequences. Thanks to powerful radiation, we have a way to accomplish this. ” 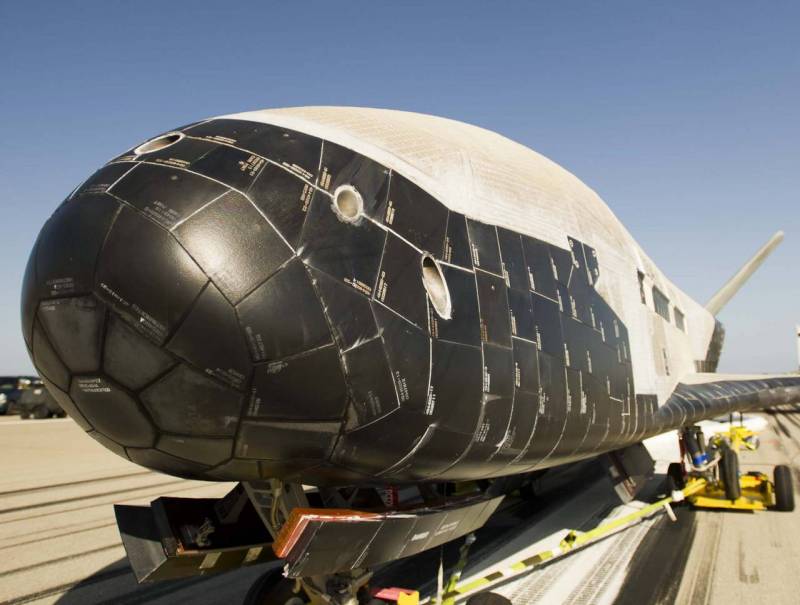 The Drive recalls that back in 2016, the U.S. Navy received a patent for a system invented by Jaffe. However, it would not be entirely true to call him a pioneer. The U.S. Air Force began testing lasers as an energy source for small light aircraft back in the 1980s. Then the military managed to create a small cone-shaped apparatus, driven only by laser beams. However, improved technology can be used, including for fairly large aircraft. It remains to add that according to a press release from the Navy.mil website (the official site of the US Navy), it was also approved for use by the Marine Corps, the Ground Forces and the US Air Force.

However, the experiment of the Navy Research Laboratory does not give the full picture of the purpose of the spacecraft. Experts previously noted that putting into orbit of cargo using the X-37B is economically disadvantageous - there are much simpler and more reliable methods for conducting experiments in orbit.

Therefore, as we have already noted above, there are alternative versions about the appointment of the Boeing brainchild. Back in 2016, the Space.com portal interviewed American experts on this subject, and many of them agreed that the spacecraft is a prototype of an interceptor that can destroy artificial satellites. Well, the immediate goal of the launches is supposedly to demonstrate that such a method is more economically feasible than using interceptor missiles.

By the way, in the past, the Dutch amateur astronomer Ralph Vandenberg photographed a spacecraft during one of his missions.

“I hunted for OTV-5 for months and visually discovered it in May. When I tried to observe it again in mid-June, at a certain time it did not appear in the predicted orbit. It turned out that he maneuvered into another orbit, "
- noted the specialist on his Twitter.

Unfortunately, neither the picture taken then, nor the announcement of new experiments give us an answer about the purpose of the X-37B. Perhaps new data will appear after the return of the device to Earth.

Ctrl Enter
Noticed a mistake Highlight text and press. Ctrl + Enter
We are
Secret Boeing X-37B: return from spaceBoeing X-37B. An experiment or a threat in space?
60 comments
Information
Dear reader, to leave comments on the publication, you must to register.