How Russia to respond to the European war with monuments to Soviet soldiers: a few suggestions 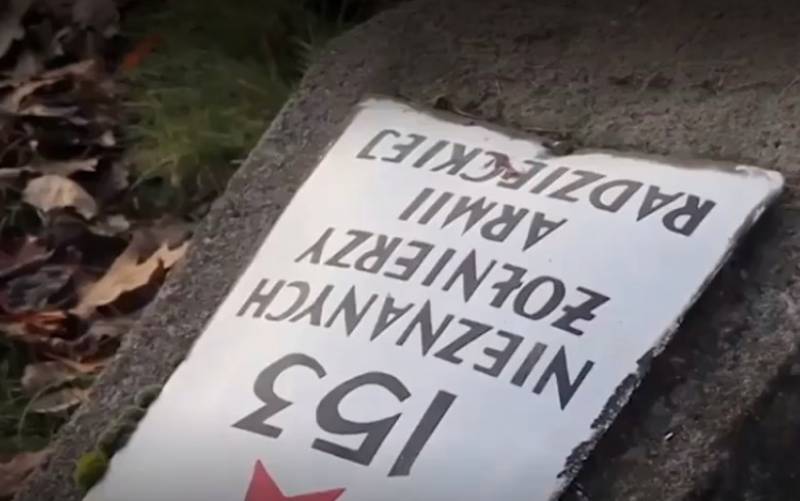 Recently, the Russian media has significantly increased the number of publications on the demolition of monuments to Soviet soldiers who died during the liberation of other countries during the Second World War. This does not mean that such cases began to appear recently. It’s just that they’re not only not responding to them before, but even not reporting them. But there is a real war with monuments to Soviet soldiers-liberators.


Apart from single incidents, the destruction of Soviet monuments in Eastern Europe took up almost immediately after the collapse of the USSR. Since Russia is considered the legal successor of the Soviet Union, these attacks are directed primarily at it, that is, at you and me. Those who are involved in the desecration and destruction of our memorials in Europe are trying to equate the Soviet Union with Nazi Germany, to instill in Europe the idea of ​​the USSR in the image of an aggressor country. Then it will not be difficult to project this image into modern Russia. 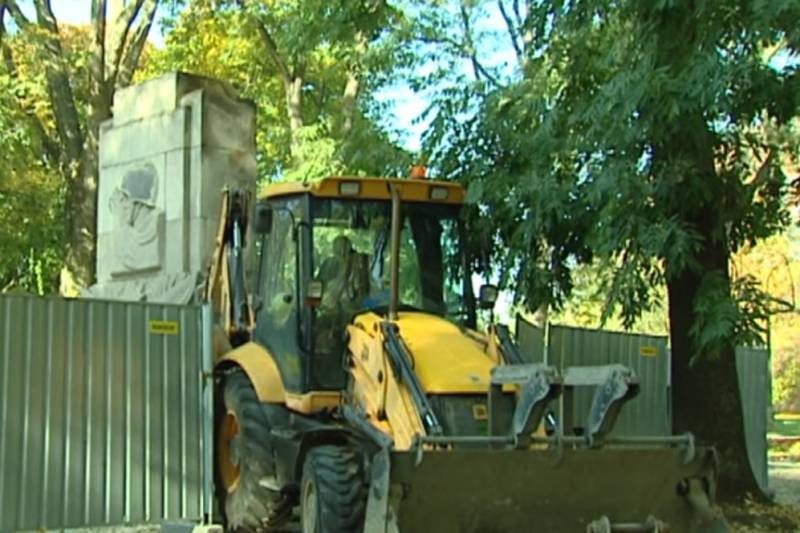 All this will continue until the Russian Federation takes adequate and effective measures. Indeed, while our country will endure, attempts to "wipe its feet" will not stop.

Of course, by adequate and effective measures I do not mean “expressing concern” and other diplomatic curtsies. Trying to shame the vandals or teach them the mind is also not an option. After all, these are not small children, but adults, mature people. Here it is necessary to act proactively.

The purpose of the measures taken by Russia is to restore respect to our fallen soldiers, to leave alone their graves and monuments dedicated to them. Not at all necessarily more decisive measures will help to achieve the goal, especially if they lack adequacy.

There are proposals, for example, that in response to the dismantling of the monument to Marshal Konev in Prague, Russia renames the metro station “Prague” and assign it the name Konev. Or to erect a monument to Marshal opposite the Czech embassy in Moscow. Some "wits" immediately suggested renaming sports slippers-Czechs into "horses" or prohibiting the baking of "Prague" cakes.

I think that these proposals to those who removed the monument to Marshal are neither cold nor hot.

The farthest, it seems, came Metropolitan Hilarion of Volokolamsk. He put forward the idea for a dismantled monument to Konev to remove a monument to one of the Czech leaders in Russia. There are few candidates: the communist writer Julius Fucik, whose monuments were removed in the Czech Republic, or Yaroslav Hasek, the author of the well-known “soldier Schweik”.

Well, do not "demolish" the same demolition in Chelyabinsk or elsewhere! They can pull someone along! For example, red Latvians or Hungarians, who at times were atrocious during the Civil War in Russia, are no less than Czechs. Or those who decided not to let the Czechoslovak corps out of Russia (and among these there are “untouchables”), which became the reason for his further “exploits”. And they are not so “white”, these “white-shoulders”, if they so easily handed Kolchak into the hands of the “red”.

In general, some offer to become like European barbarians and begin to destroy the monuments. They would also propose to act in the same manner in response to Nazi crimes.

The previous criticism does not mean that I justify the vandals, I propose to sit back and do nothing. On the contrary, I believe that you can’t wait, you need to act quickly and firmly. 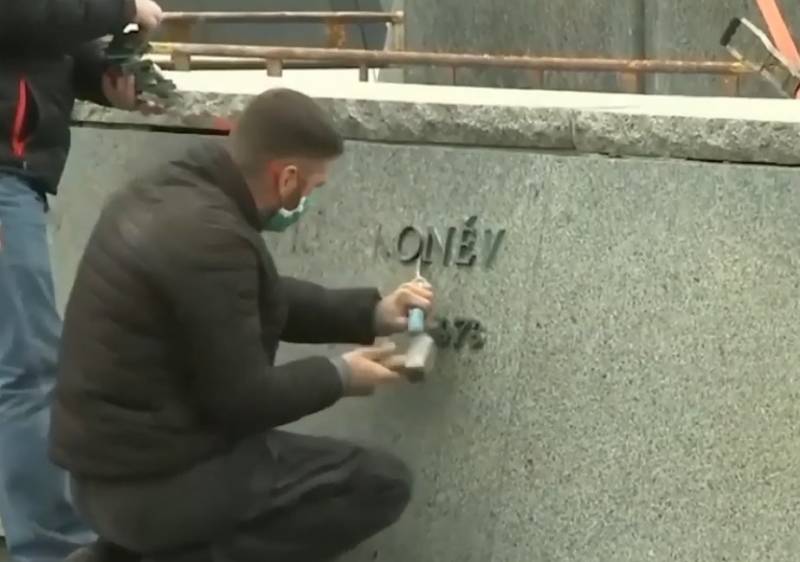 Moreover, I consider the series of steps that Russia has already taken today in response to the demolition of Soviet monuments to be absolutely correct. Of course, one should start acting much earlier, back in the 90s, but better later than never.

I mean the law adopted in April 2020, which provides for criminal liability for the destruction of memorials to heroes of the Great Patriotic War. Now for this in Russia relies up to five years in prison. And the law applies not only to Russian citizens and monuments installed in the Russian Federation, but also to memorials abroad demolished by foreigners.

The bill was personally introduced by President Vladimir Putin, although the idea itself came from the Russian Ministry of Defense. Literally the day after the signing of the bill, its relevance was confirmed. Then in the Czech capital dismantled a monument to Soviet Marshal Konev.

By the way, soon Sergey Shoigu turned to the head of the Investigative Committee, Alexander Bastrykin, urging him to actively prosecute foreign citizens who were responsible for the demolition of monuments to Soviet soldiers-liberators.

Of course, both in Russia and in Europe they understand that those guilty will not go to jail, at least immediately after the announcement of the verdict.

Of course, Poland or the Czech Republic will not hand over their citizens to Russian justice, and Interpol will not put them on the international wanted list. And the "long arms" of the Russian special services will not "take them out" in order to bring them to justice, as the Israelis did with Nazi criminals.

But this does not mean that punishment will not follow for them. Firstly, a court decision against those responsible for the demolition of Soviet monuments will be tantamount to the imposition of personal sanctions by Russia. These people will not be able to enter our country, and if they do, they will immediately appear before Russian justice. And even if today they will not be extradited to Russia, it is not known what will happen tomorrow. After all, the international situation is changing, but the court decision remains. And it is possible that at one point the guilty party will suffer a deserved punishment.

Therefore, it is necessary to respond to every demolition or desecration of the monument to the heroes-liberators of Europe, bring the matter to court and pronounce the sentence, even if it cannot be immediately realized.

In addition, we must not forget that among those who died in Europe during the Great Patriotic War there were not only Russians and representatives of other peoples of Russia. In the ranks of the Red Army, soldiers from other union republics, which today are independent states, also fought. Thus, the desecration of burials and monuments to Soviet soldiers is an insult to the peoples of these countries. Therefore, they should also enact laws that pursue vandals.

Of course, not all former republics of the USSR will begin to adopt such laws. But if this is done by several countries in the post-Soviet space, then the vandals will feel even more uncomfortable, because not only Russia will close for them, but also, for example, other EAEU countries. I consider this one of the options for not only responding to the actions of vandals (including those denounced by state powers), but also for protecting historical the truth.

Not only criminal liability

Russia can influence the destroyers of Soviet monuments not only with a fear of criminal liability, especially since it is impossible to fully implement court decisions. There are other levers.

For example, do not discount the opportunities for diplomacy. You can take an example from the same UK, as they did in the story with the "poisoning" of the Skripals. Without blinking an eye, London sent our diplomats out of the country on a far-fetched occasion, and some other states unanimously followed the British example. Even without trial and investigation regarding the real culprits of his poisoning (if it was at all ...).

In the case of monuments, why should we be shy? Here, and all the evidence is available. The authorities themselves in those countries where dismantling is carried out are not embarrassed to broadcast everything. They would call the ambassador of the culprit country “on the carpet” to the Russian Foreign Ministry and announce the expulsion of diplomats. And not a year later, but the day after the act of vandalism.

And do not underestimate the economic leverage. Imagine if Russia after the incident with the monument to Konev would declare a boycott of Czech goods, stop buying Skoda, Czech beer and other products. Until a monument is put in place. The Russian market is not so small that you can safely lose it. Losses are inevitable. Or for starters, you can raise duties on goods from the Czech Republic, Poland, the Baltic countries. It would be worthwhile to introduce other economic sanctions in order to painfully hit the guilty in the pocket.

Ctrl Enter
Noticed a mistake Highlight text and press. Ctrl + Enter
We are
About Stalin and KhrushchevWhat you didn't want to know about England
221 comment
Information
Dear reader, to leave comments on the publication, you must to register.