Mythological freedom of speech: tales of the West and East 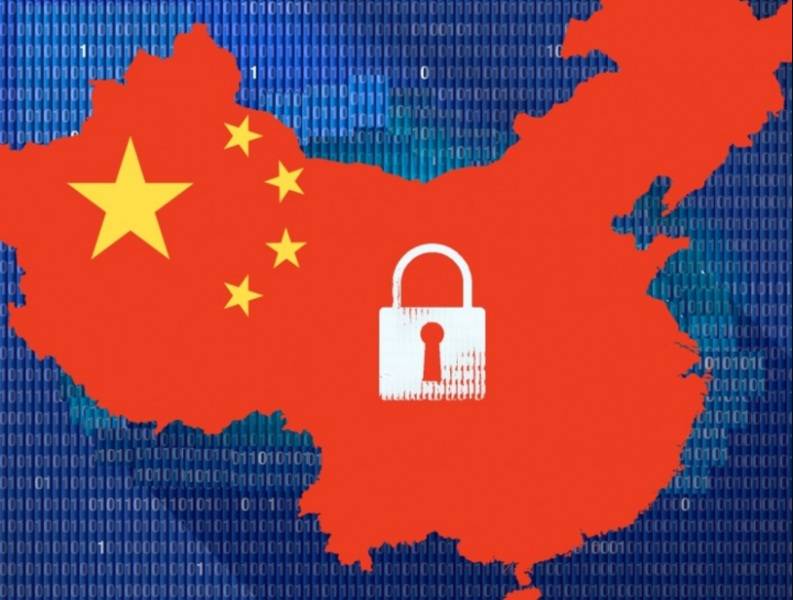 In accordance with the constitution

In recent decades, Russia has regularly faced accusations of restricting freedom of speech and strict censorship. This is especially true for human rights defenders from Ukraine and other states that are not very friendly to us. However, even the most superficial review of what is happening in the world with freedom of speech makes us look at this from a completely different point of view.

It’s worth starting not with the light of democracy, but with the states, let’s say, of an alternative social system. For example, the People’s Republic of China.

The main object of censorship in the Middle Kingdom is, of course, the Internet. The country's population is more than 1 billion, and therefore, timely monitoring of information received by users from smartphones and computers is considered a priority in China. Here, at the beginning of the XXI century, the world's most powerful Internet filter, the Great Chinese Firewall, was launched, blocking many global information resources. YouTube and Facebook do not work, and Apple, in order not to be expelled from such a large market, had to transfer to the authorities an array of user data from the Chinese iCloud segment. The latter example illustrates very well the capitalist approach to freedom of speech and censorship: where financial interests make it neglected, companies are willing to do it. Of course, a black market for access from the VPN mode exists, but the penalties for this are appropriate. So, for help in circumventing the Great Chinese Firewall, you can get up to 5 years of real imprisonment.

Now in the PRC more than 50 thousand employees follow what users write on social networks and instant messengers. Naturally, special attention is paid to accounts with a large audience. Blogger Wang Jiangfen was arrested for making ironic jokes about Xi Jinping all over the country, and Neihan Duanzi was blocked after comparisons between the Chinese leader and Winnie the Pooh.

At the same time, it is important to understand that in the PRC such a order of things was laid down in the country's Constitution since 1954. Article 35 of the main document, in particular, states that Chinese citizens enjoy freedom of speech, press, assembly, association, procession, and demonstration. But ... The realization of this right is stipulated by a ban on the publication of materials detrimental to the "unity, territorial integrity and sovereignty of the PRC", as well as contrary to the "basic principles of the PRC Constitution," that is, a commitment to the socialist path and the leading role of the Communist Party. With the same reservations, the right of citizens to criticize and make proposals regarding the activities of any state body or official is realized. As is clear from this text, the state can be very flexible in assessing freedom of speech in society.

Now in China, a new process of forming an individual social credit is developing, which consists of indicators of loyalty of a citizen of the Communist Party. All statements on the Internet or on other sites, compromising or, conversely, praising the current system, will play in plus or minus the “social karma” of the citizen. This will also add information from the court, law enforcement agencies and the nature of the content downloaded from the Internet. What can the government offer trustworthy citizens? Soft loans, prestigious places in universities and work in the public sector, as well as the best schools for children. Those who are on the black list are even planned to be restricted on trips abroad. All these measures should stimulate the formation of internal self-censorship among Chinese citizens. Actually, if a person simply does not go to dubious sites and write vulgarities about the great comrade Xi, then the Great Chinese firewall will not be needed. As French journalist Emmanuel Pierre said, “the highest form of censorship is the emergence of self-censorship.”

Games with the law

Probably in the United States, a country with a rich democratic history, there are all prerequisites for the development of ideal freedom of speech. Of course, but with small reservations that are not directly contrary to the US Constitution. Thus, the First Amendment of the Main Law states the prohibition of the adoption of laws that impede freedom of speech. Example: in 2009, the authorities were not able to directly block the infamous WikiLeaks resource, as the blocking was challenged in court, but one of the largest providers in the country, Amazon subsequently blocked access to the site. Naturally, a private company did this under pressure from the state. Formally, the First Amendment to the Constitution was not violated. In addition, the government can very freely interpret the First Amendment, which indicates the possibility of limiting the form of manifestation of freedom of speech. What does it mean? This means that when crowds of people take to the streets demanding, for example, the resignation of President Trump, they will not be dispersed for democratic will, but for disturbing public order. Which, in fact, has happened repeatedly in the USA. One need only recall the anti-globalists in Times Square. This trick is freeing the hands of the authorities. 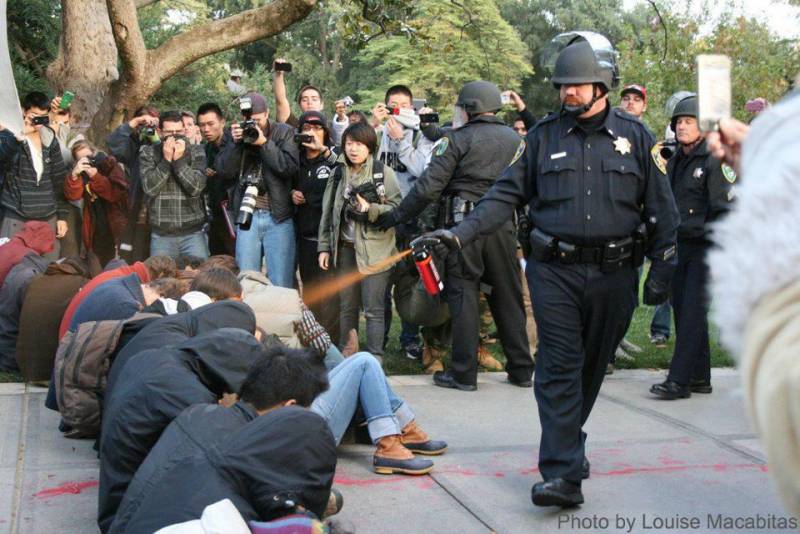 Source: rbc.ru
In the United States, however, reverse distortions are possible. In the history of the country there is a case with members of the Ku Klux Klan, who in 1969 demanded "revenge" on Americans of Jewish and African descent. It would seem that this is a clear reason to condemn racists and Nazis! But the Supreme Court justifies the representatives of the Ku Klux Klan, again referring to the First Amendment. In it, in particular, it is indicated that the reasons for restricting self-expression may be “the promptness of such actions” and “these actions may become their likely result”. That is, following the logic of the US Supreme Court, the Kuklklan’s leaders most likely did not call for immediate revenge on Jews and African Americans, so their freedom of speech should not be restricted. If a racist called in a square in front of the crowd to a similar one and would immediately have lynched someone, then the First Amendment would not have been able to protect him. Although, I think, in this story it was not without obvious sympathy from the Supreme Court to the racist community of the United States.

Another interesting legal aspect of life in the USA is very interesting. Since the time of the “witch hunt”, which is in no way consistent with freedom of speech, there are many restrictions in the laws. So, in California, teachers cannot talk about communism in the classroom, even with the goal of simply introducing the student to this teaching. Also in this state, a communist will not be taken to the civil service. We must pay tribute, in 2008 lawmakers tried to repeal these acts, but Governor A. Schwarzenegger vetoed the changes.

We go further - to the state of Tennessee. It turns out that in this region a person who "calls for the overthrow of the American form of government" cannot work as a teacher. They don’t want to see communists in state agencies in Texas, Georgia, and in Florida they can be banned from fishing like that. Next, open the West Virginia Code and see, probably, the most democratic law in the whole USA:
“It is unlawful for any person to own or display any red or black flag, or to display any other flag, emblem, device or sign of any kind expressing sympathy or support for ideals, institutions or forms of government that are hostile, unfriendly or antagonistic to the form or the spirit of the constitution, laws, ideals, and institutions of this state or the United States. ”
Does this legislative act violate freedom of speech or expression? Of course! Moreover, for non-compliance faces criminal liability - from 1 year to 5 years. A very good argument in disputes with American opponents regarding democracy in Russia.

Back in 2009, the German parliament passed a bill to create certain barriers on the Internet. And all would be fine, but the Bundestag deputies did not take into account the opinion of more than 130 thousand burghers who signed the protest petition. And a few years later, a rule appears “requiring telecommunication companies to store some user data for 10 weeks.” And again, contrary to the petitions signed by tens of thousands of German citizens. 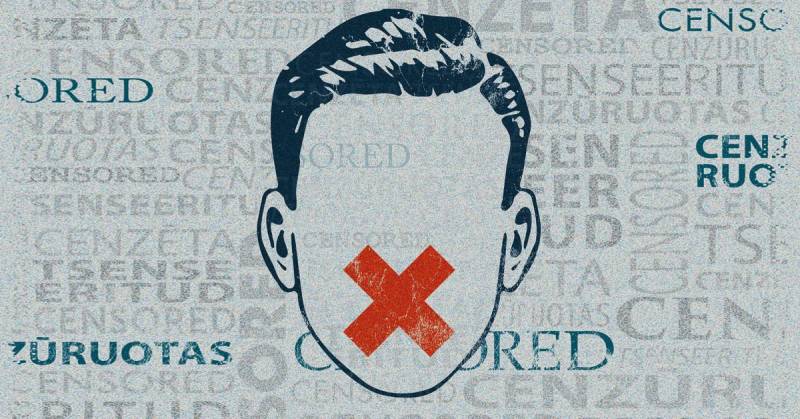 Source: rubaltic.ru
A special German case is Western case law in relation to freedom of speech. I propose to consider examples of what is prohibited in Germany on the basis of precedents of court decisions. Particular attention is drawn to the fact of criminal prosecution for such misconduct, even if in the form of a fine. The fact is that in Germany a person with such a fine remains a “felon”, although he has not spent a single day in prison.

So, why in a developed European state can one boom under an article? Firstly, for naming Germany as a “lawless state,” “ideological dictatorship,” as well as for asserting that the country “willingly obeys Jewish orders.” Secondly, the state cannot be called the "republic of the dough", "the corrupt shed" and the "stall selling Coca-Cola." One involuntarily recalls the domestic “liberals” who with impunity all too often call Russia “giant gas station”. Thirdly, the prohibitions concern the artistic work of the Germans. It is impossible to draw the coat of arms of the land of Hesse, on which a lion is depicted in a police helmet on his head and a bloodied rod in his claws. Drawings and photo collages in which a federal eagle is depicted behind a prison bars are prohibited. There are more curious moments. The image of a federal eagle as a skeleton or neck, as well as hoisting the national flag in a pile of horse shit as a protest against neo-Nazis is criminally punishable. The above prohibitions are formulated on the basis of decisions of courts of both regional and federal levels from 1952 to 2002.

All of the above leads to seditious thoughts. Perhaps the textbooks on which countries with developed democracies try to teach Russia freedom of speech should finally be rewritten? And in some cases, throw it away.

Ctrl Enter
Noticed a mistake Highlight text and press. Ctrl + Enter
We are
Situational analysis of the death of the MH17 flight (Malaysian Boeing 777), made on the basis of engineering analysis from 15.08.2014Results of the week. "God forbid to see Russian revolt, senseless and merciless!"
90 comments
Information
Dear reader, to leave comments on the publication, you must to register.