MiG-15 - the best fighter of the Korean War

July 31 2012
28
The MiG-15 (according to the NATO classification Fagot, the MiG-XNUMHUTI version - Midget) is the first mass Soviet fighter that was designed by the Mikoyan and Gurevich design bureau at the end of the 15 of the last century. Is the most massive jet combat aircraft in stories aviation. The fighter made its first flight on December 30, 1947, the first production aircraft took to the air exactly one year later on December 30, 1948. The first combat units that were armed with the MiG-15 were formed in 1949. In total, 11 fighters of all modifications were built in the USSR. They were quite widely exported to China, the DPRK and the Warsaw Treaty countries, as well as to a number of countries in the Middle East (Syria, Egypt). In total, taking into account the aircraft that were produced under license in Czechoslovakia and Poland, the total number of fighter aircraft released reached 073 15 pieces.

The RD-10 and RD-20 jet engines mastered at one time by the Soviet industry to the year 1947 completely exhausted their capabilities. There is an urgent need for new engines. At the same time, in the West at the end of 40-ies, centrifugal compressor motors, also called the Whittle turbine, were considered the best engines. The power plant of this type was fairly reliable, simple and undemanding to operate, and although these engines could not develop high thrust, this scheme became popular in aviation in many countries for several years.

It was decided to start the design of the new Soviet jet fighter for these engines. To this end, at the end of 1946, a delegation was sent to England, which in those years was considered the leader of the world jet engine industry, which included chief designers: the engine V. Y. Klimov, the aircraft designer A. I. Mikoyan and the leading specialist in aviation Materials Science S. T. Kishkin. The Soviet delegation acquired in the UK the most advanced at that time turbojet engines from Rolls-Royce: Nin-I with 2040 kgf and Nin-II with 2270 kgf and 1590 kgf . Already in February, the USSR received Dervent-V X-machines (total 1947 units) as well as Ning-I engines (30 units) in February, and 20 Nin-II engines were received in November 1947. 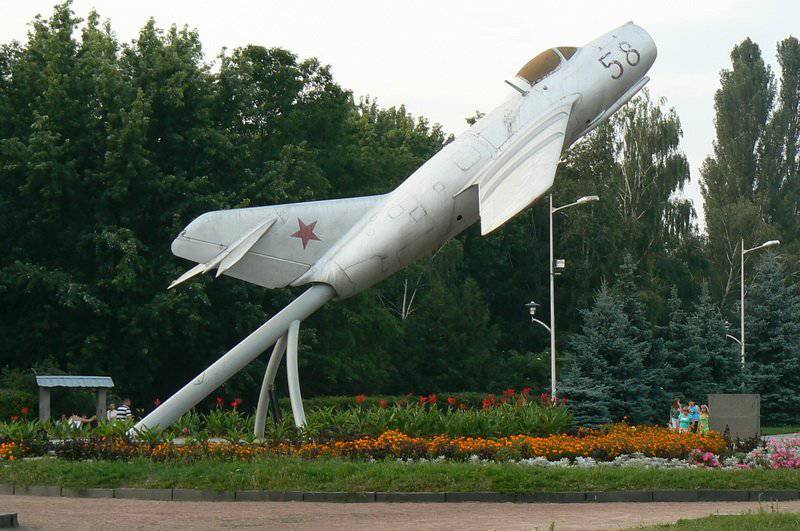 In the future, the novelties of the English engine-building were successfully enough copied and put into mass production. "Ning-I" and "Ning-II" received, respectively, the indices RD-45 and RD-45F, and "Dervent-V" was named RD-500. The preparation of serial production of these engines in the USSR began in May 1947 of the year. At the same time, the specialists of the OKB Plant No. 45, which was engaged in the RD-45 engines, analyzed materials, removed the drawings and spent on long-term tests in the amount of 6 “Nin” engines, including the second version 2 engine.

The emergence in the USSR of new engines made it possible to begin designing fighter jets belonging to the new generation. Already 11 March 1947, the Council of Ministers of the USSR signed a decree on the plans of an experienced aircraft for the current year. Within the framework of this plan, the design team, headed by A. I. Mikoyan, was approved by the task of creating a front-line jet fighter with an airtight cabin. The plane was planned to build in 2-x copies and submit for state tests in December 1947 year. In fact, work on the new fighter in the OKB-155 A. I. Mikoyan began in January 1947 year.

The projected fighter received the name and 310 and factory code "C". The first prototype of the machine, with the designation C-1, was admitted to the 19 flight test of December 1947. After carrying out ground test procedures, the aircraft, piloted by test pilot VN Yuganov, took off on December 30 of the year 1947. Already in the first stage of testing a new aircraft showed excellent results. In this regard, the 15 March 1948, the fighter, which received the designation MiG-15 and was equipped with an RD-45 engine, was launched into a series. The construction of the aircraft was carried out at the plant №.1 them. Stalin. In the spring of 1949 of the year, military trials of the new front-line fighter began at the Kubinka air base in the 29 Guards Aviation Regiment near Moscow. Trials continued from May 20 to September 15, with 20 aircraft participating in them. 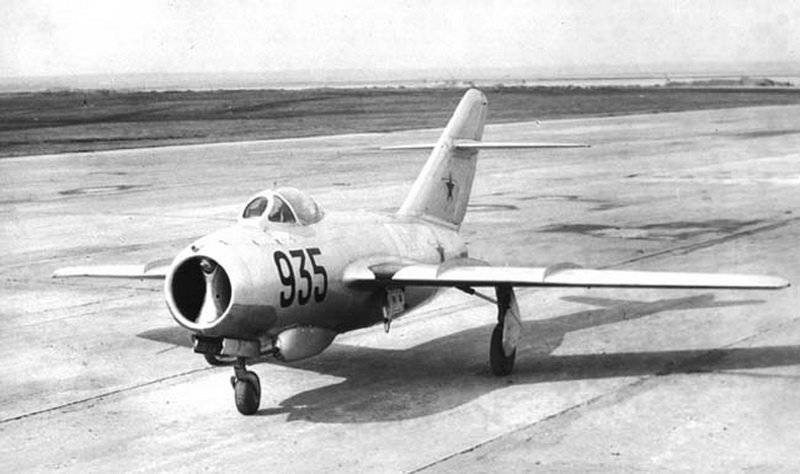 Description of the design of the MiG-15

The front-line jet fighter MiG-15 was a mid-wing fighter with a swept wing and tail unit, the design of the aircraft was all-metal. The fuselage of the aircraft had a circular cross section and type - semi-monocoque. The tail part of the fuselage was detachable, using internal flanges to install and carry out comprehensive engine maintenance. In the nose of the fuselage was the engine air intake, which on both sides covered the cockpit.

The wing of the fighter was single-sided and had an oblique transverse beam, which formed a triangular niche for the retractable landing gear. The wing of the aircraft consisted of detachable 2-x consoles, which docked directly with the fuselage of the machine. Through the fuselage were the power beams of the frames, which were a continuation of the power beams of the wing and spar.

The wing of the aircraft had ailerons with sliding flaps on rail carriages and internal aerodynamic compensation. The flaps could deviate on landing to 55 °, on takeoff - to 20 °. 4 aerodynamic ridges were placed on top of the wing, which prevented the flow of air along the wing and the flow in the end of the wing during flight with high angles of attack. The fighter's plumage was cruciform, the stabilizer and the keel were two-spar. The rudder consisted of 2-x parts located under and above the stabilizer. 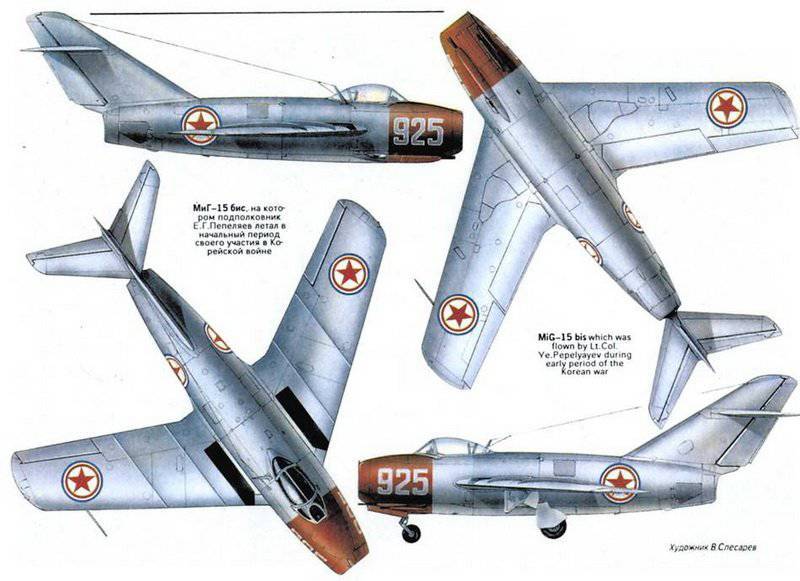 The chassis of the fighter was a three-wheeled, with a nose strut and lever wheel suspension. Release and cleaning of the chassis, as well as 2-x brake flaps in the rear fuselage were made using the hydraulic system. The brakes had the wheels of the main chassis, the brake system was pneumatic. The management of the fighter was tough and consisted of rocking chairs and rods. On the latest versions of the MiG-15, the boosters were introduced into the aircraft control system. The power plant of the machine consisted of a single RD-45F engine with a centrifugal compressor. The maximum engine thrust was 2270 kgf. On the version of the MiG-15 bis fighter, a more powerful VK-1 engine was used.

The armament of the aircraft was cannon and included the 37-mm gun NS-37, as well as the 2-x 23-mm gun HC-23. All guns were in the lower part of the aircraft fuselage. To facilitate the reloading process, the guns were mounted on a special removable carriage, which could be lowered down using a winch. Under the wing of a fighter, 2 additional fuel tanks or 2 bombs could be hung.

Combat use of vehicles in Korea

The pause in the combat use of fighters after World War II lasted only 5 years. Historians have not yet had time to finish their writings on past battles, as new air battles unfolded in the skies over Korea. Many experts called these hostilities a kind of training ground for running in new military equipment. It was in this war for the first time in the air that jet fighters and fighter bombers fully tested their capabilities. Particular importance was given to the confrontation of the American “Sabra” F-86 and the Soviet MiG-15. 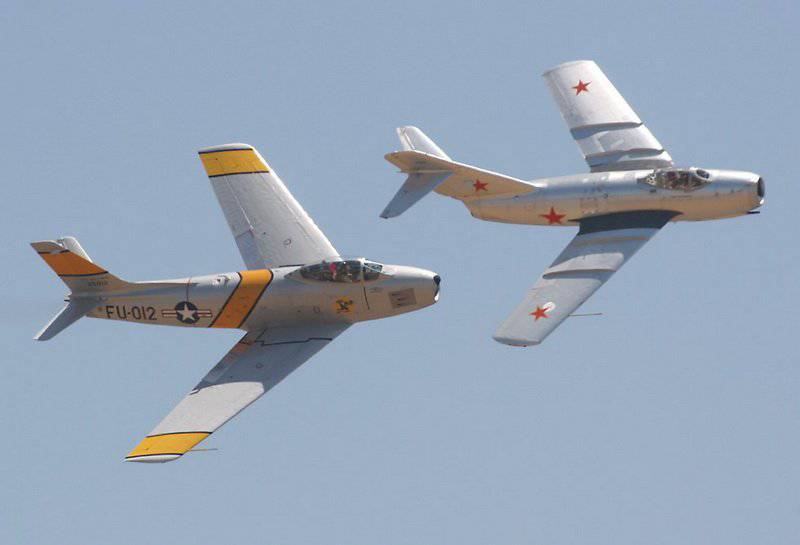 The main opponents of the Korean War are the MiG-15 and Saber "F-86
During the 3 years of fighting in the skies over Korea, Soviet internationalist pilots from the 64 Fighter Air Corps conducted 1 872 air combat, in which they were able to shoot down 1 106 American aircraft of them around 650 "Sabre". At the same time MiG losses were only 335 aircraft.

Both the American Saber and the Soviet MiG-15 were the first generation of fighter jets, both of which were slightly different in their combat capabilities. The Soviet fighter was much lighter on the 2,5, but the Saber compensated for the extra weight with a more heavy-duty engine. The speed of the aircraft on the ground and the thrust-to-weight ratio was almost identical. At the same time, the F-86 maneuvered better at low altitudes, while the MiG-15 gained an advantage in climb and acceleration at high altitude. The American could also stay in the air for a longer time due to the "extra" 1,5 tons of fuel. The main battles fighters fought on transonic flight mode.

Different approaches for fighters were noted only in armament. The MiG-15 had a much larger second salvo due to the cannon armament, which was represented by two 23-mm and one 37-mm cannon. In turn, the Sabers were armed only with 6-s 12,7-mm machine guns (at the very end of the war, versions with 4-s 20-mm guns appeared). In general, the analysis of the “questionnaire” data of the machines did not allow an inexperienced expert to make a choice in favor of a potential winner. It was possible to resolve all doubts only in practice.

Already the first air battles demonstrated that, contrary to many forecasts, technical progress practically did not change the content and form of air combat. He retained all the laws and traditions of the past, remaining group, maneuverable and neighbor. All this was due to the fact that there was no revolution in the armament of the aircraft. On board the new jet fighters, guns and machine guns from piston fighters - active participants in the last war. That is why the "lethal" distance for attacks remained almost the same. The relative weakness of a one-time volley, as during World War II, forced it to be compensated for by the number of fighter jets involved in the attack. 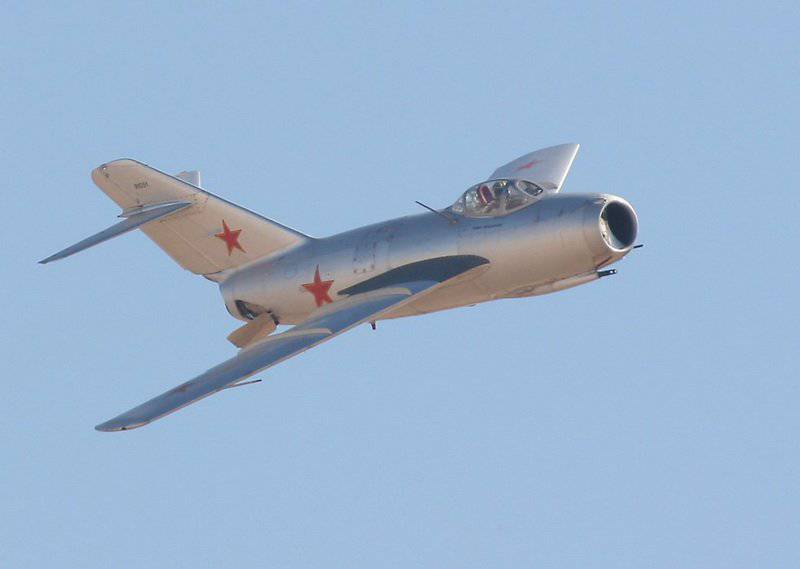 At the same time, the MiG-15 was created for air combat and fully corresponded to its intended purpose. The designers of the machines were able to preserve the ideas that were characteristic of the MiG-1 and MiG-3 aircraft: the speed of the machine, the height and the climb rate, which allowed the fighter pilot to focus on conducting a pronounced offensive battle. One of the strengths of the fighter was its higher damaging potential, which gave him a tangible gain in the main stage of the battle - the attack. However, to win, it was necessary to accumulate a positional and informational advantage in the previous stages of the air battle.

Straight flight, which combined the oncoming rapprochement with the target with the attack, became available to fighters only 30 years later - after the appearance of medium-range missiles and radars on airplanes. MiG-15 combined approach with a goal along with a steep maneuver and entering the rear hemisphere. In the event that the Saber was noticed by a Soviet fighter at a distance, he sought to impose on him a maneuverable battle (especially at low altitudes), which was unprofitable for the MiG-15.

Although the Soviet fighter somewhat lost the F-86 in horizontal maneuvering, it was not so tangible to completely abandon it if necessary. The activity of effective defense was directly associated with the flying of a couple of pilots and the implementation in battle of the principle of “shield and sword”. When one of the aircraft carried out the attack, and the second was engaged in a cover. Experience and practice have shown that the MiG-15 pair, which is consistently and inextricably operating, is almost invulnerable in a close-combat maneuver. Also, the experience that Soviet fighter pilots, including regimental commanders, gained during World War II played a role. The construction of the bookcase and the principles of group fighting still worked in the skies of Korea.

Information sources:
- http://www.airwar.ru/enc/fighter/mig15.html
- http://www.opoccuu.com/mig-15.htm
- http://www.airforce.ru/history/localwars/localwar1.htm
- http://en.wikipedia.org/
Educational film. Film Department of the Civil Code of the Research Institute of the Air Force of the USSR Armed Forces, 1949 year.
Screenwriter and director V. Povarov
Digitized and published by the Wings of Russia studio in 2007

Ctrl Enter
Noticed oshЫbku Highlight text and press. Ctrl + Enter
We are
The best fighter in the worldYak-141 (Freestyle). Vertical Racing
28 comments
Information
Dear reader, to leave comments on the publication, you must to register.