“We knew you were coming!” How liberated Europe met our warriors 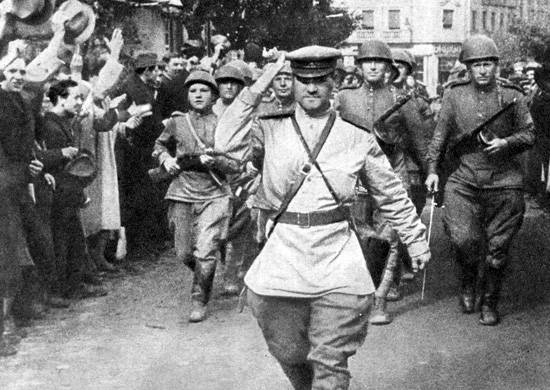 Today, when blasphemous statements are made in some countries that in 1944-1945 the Red Army that arrived there was not the liberators but the occupiers, when in Prague, clearing which of Nazi evil, our soldiers died after the surrender of Germany, a monument was demolished to Marshal Ivan Konev, and the American military and diplomats, assuming themselves the status of supreme arbiters, undertake to assert that the USSR “did not bring Europe freedom,” it’s time to recall how its inhabitants actually walked along the streets of their cities and villages with Soviet warriors in those distant victorious days.


Crowds of people on the streets, somewhere destroyed to the ground, somewhere surviving at the cost of the lives of Soviet soldiers, as in the same Prague, women and men crying from happiness with armfuls of flowers with which they throw dusty “thirty-four” with red stars on the towers ... Such newsreels are familiar to most of us from childhood. So, it turns out that this is all fake? "Stalinist propaganda"? Of course not! It would have been impossible to make them pretend to “play” such emotions of people who had suffered the long-term nightmare of the Nazi occupation.

In addition to film shots, front-line photographs, a lot of documentary evidence has survived, as those who walked the streets of liberated Warsaw, Belgrade, Budapest, Sofia and other European cities, and those who sincerely met these people as savior, deliverer, defender. There is a story of a resident of Prague who was still a child standing on the barricades and hoped only one thing as a salvation - a breakthrough into the Russian city tanks. And he waited ... And our soldier recalled how the gray-haired veteran standing next to him didn’t hold back tears in the Czech Republic, to which one of the local residents translated the words of a young girl who didn’t want to leave him: “We were waiting for you so! We always knew that you would come and save us! ”

No less warmly received our soldiers in Bulgaria and Poland. The originals of the corresponding reports received by the command on this occasion, which say about the "exceptional friendliness of the inhabitants," who "almost completely go out into the streets to meet the columns of our troops, carry pre-prepared flowers and try to treat soldiers and commanders with whatever they can, have survived." However, in the same Poland the Red Army men did not encounter such general rejoicing and warm attitude - someone harbored a grudge in 1939, someone was influenced by the Craiova Army, which called for "fighting the Soviets to death." Everything happened.

It was even more difficult in Romania and especially Hungary. Both of these countries were not just allies of Nazi Germany - their citizens took an active part in the hostilities against the Red Army in the USSR and its occupation. However, the Germans and the Antonescu regime were so fed up with the Romanians that they, resigned to defeat, met with joy rather than hatred. In any case, in 1944, the Krasnaya Zvezda newspaper described how the inhabitants of Bucharest welcomed the Red Army "with tears of joy in their eyes." But during the capture of Budapest, many Hungarians, according to documentary evidence, to the last helped the Germans who were trying to stay in the city and who fought shoulder to shoulder with their own soldiers. There was not much joy from the arrival of our troops, and the soldiers and officers of the Red Army, according to the memoirs, felt themselves in enemy territory for a long time.

However, all this faded before the wave of panic horror and pathological hatred that Germany had met them later. The propaganda machine of the Third Reich, whose task was to convince the Germans that it was better to die than to be "in the hands of the Bolshevik barbarians", was launched at full capacity and, we must give it its due, achieved great success. This monstrous informational campaign in its scope and cynicism was personally conducted by the main liar of the Nazi empire - its propaganda minister Joseph Goebbels, who wrote about the “steppe scum” and “brutally cruel subhumans” who were going to kill and rape Germany. Yes, it was he who launched the myth of the "multitude of Germans raped by the Red Army", and those who repeat it today are diligent students and followers of Goebbels.

One of the most characteristic “informational special operations” organized by this scorched scoundrel is the events in the village of Nemmelsdorf in East Prussia, which was briefly abandoned by the Wehrmacht and then recaptured. After the withdrawal of the Red Army, there were "accidentally discovered" the bodies of local residents, "raped and killed by the Russians." High representatives of party and military structures of the Nazis, as well as journalists, immediately arrived at the scene. As soon as possible, a “documentary” film about the “terrible tragedy” was shot, and Hitler’s “Völkicher Beobachter” erupted in a “revealing” article “The Fury of Soviet Beasts”. Nowadays, the events in Nemmelsdorf were recognized as a fake organized by the Nazis, and the soldiers of the Wehrmacht and even the SS who were present at the scene and refuting the official version repeatedly acted as witnesses.

Nevertheless, the work was done: Germany did not meet our soldiers in any way with flowers, but in the best case, completely empty settlements. Another was enough - shots in the back, flying from the bushes of pomegranates, and even poisoned food and drinks, specially left in the most visible place. At the same time, trying to give rise to the Germans "unbending Aryan spirit" and the will to resist, Goebbels and the company pretty much overdone: the country was covered by a wave of mass suicides. Only in Berlin at least 40 thousand civilians committed suicide before the Red Army took it.

The Red Army entered Europe as a liberator and will remain so for centuries. Today's “unconsciousness” that struck some people there only says that the new “values” that have grafted on its inhabitants in recent decades have left nothing human in them — no conscience, no shame, no elementary gratitude. However, all this in no way can either belittle the heroism of the Soviet people in the Great Patriotic War, or challenge his victory in it.

Ctrl Enter
Noticed a mistake Highlight text and press. Ctrl + Enter
We are
What is fascism for a victorious nation?Sights that hurt the soul
41 comment
Information
Dear reader, to leave comments on the publication, you must to register.