The fall of the Reich. How Germany Surrendered to the Red Army 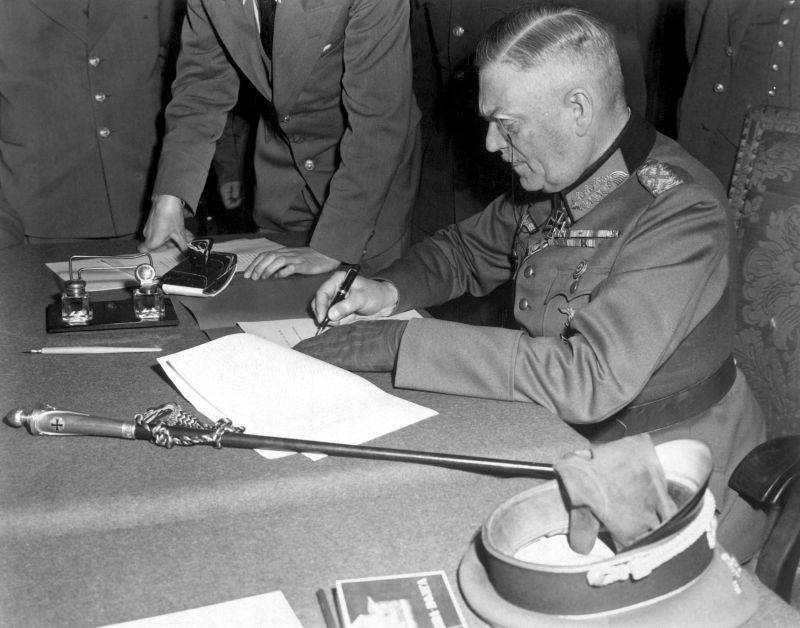 After the fall of Berlin, the destruction of the Berlin group of the Wehrmacht by the troops of Zhukov, Konev and Rokossovsky, the German military-political elite still tried to maneuver. Hitler's successor, Grand Admiral Dönitz, entered into negotiations with the command of the British and American forces on unilateral surrender in the West, and sought to withdraw as many German divisions there.

This idea had a chance of success. The fact is that the allies, led by W. Churchill, worked out a plan for the start of the third world war: England, the USA and a number of other powers against Russia (Operation "The Unthinkable"). London wanted to oust the Russians from Eastern Europe, including Czechoslovakia, Austria and Poland. Therefore, the remaining German divisions and the military-industrial potential of the Reich could come in handy to the Anglo-American supreme command. The Germans would become the edge of the West against the Russians, and the British and Americans would remain in the second tier.

Before the general surrender of Germany, a series of partial surrenders of large Wehrmacht units took place. In March-April 1945, the British and Americans held talks with the Germans in Switzerland on the surrender of German troops in northern Italy. On April 29, 1945, the commander of the Army Group C signed an act of capitulation in Colonial Colonel General G. Fitingof-Scheel in Caserta. Hitler had previously subordinated to Kesselring all the armed forces of the Reich in southern Europe. Kesselring refused to capitulate, dismissed Fittinghof and his chief of staff, General Röttiger. However, the commanders of the armies belonging to the “C” group, the commander of the Luftwaffe von Paul forces and the commander of the SS troops in Italy, Wolf, ordered their troops to cease hostilities and surrender. Kesselring ordered the arrest of the generals. The commander-in-chief himself doubted, therefore, the matter did not come to fighting between the Germans. When news came of Hitler's suicide, Kesselring stopped resisting. On May 2, German troops surrendered in Italy.

On May 2, 1945, the remnants of the German garrison capitulated by General Weidling capitulated. On the same day in Flensburg, Admiral Dönitz held a meeting of the new German government. The meeting participants decided to concentrate on saving as many German forces as possible and withdrawing them to the Western Front in order to capitulate to the British and Americans. It was difficult to achieve total surrender in the West in view of the agreement of the allies with the USSR, so it was decided to pursue a policy of private surrender. At the same time, resistance against the Soviet ones continued.

May 4, 1945 the new commander of the German fleet, Admiral Hans-Georg Friedeburg, signed the act of surrender of all German armed forces in the north-west (in Holland, Denmark, Schleswig-Holstein and North-West Germany) to the 21st Army Group of Field Marshal B. Montgomery. The agreement extended to ships and ships of the military and merchant navy, acting against England and leaving ports and bases. On May 5, surrender entered into force. On May 5, General Friedrich Schulz, captain of Army Group G, operating in southwestern Germany, capitulated to the Americans. As a result, there were only four large Wehrmacht groups that did not add up weapon. Army Group "Center" Scherner, Army Group "South" Rendulich, troops in the Southeast (Balkans), Army Group "E" A. Löhr and Army Group "Courland" Hilpert. All of them continued to resist the Russian troops. There were also separate garrisons and enemy groups on the Baltic Spit, in the Danzig region, in Norway, on islands in the Mediterranean Sea (Crete, etc.), etc. 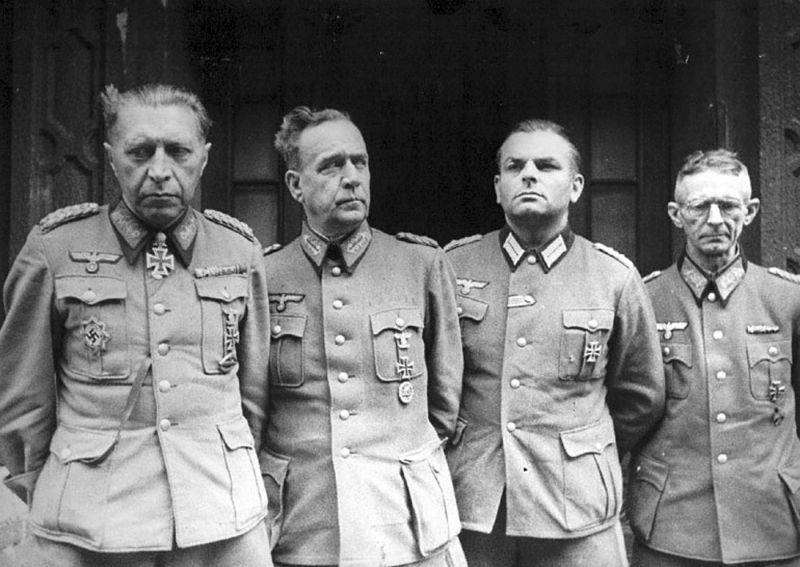 The commander of the 2th Corps General Helmut Weidling (left), who surrendered to the Soviet troops on May 56, together with the officers of his staff, the last Berlin defense commander personally appointed by Hitler 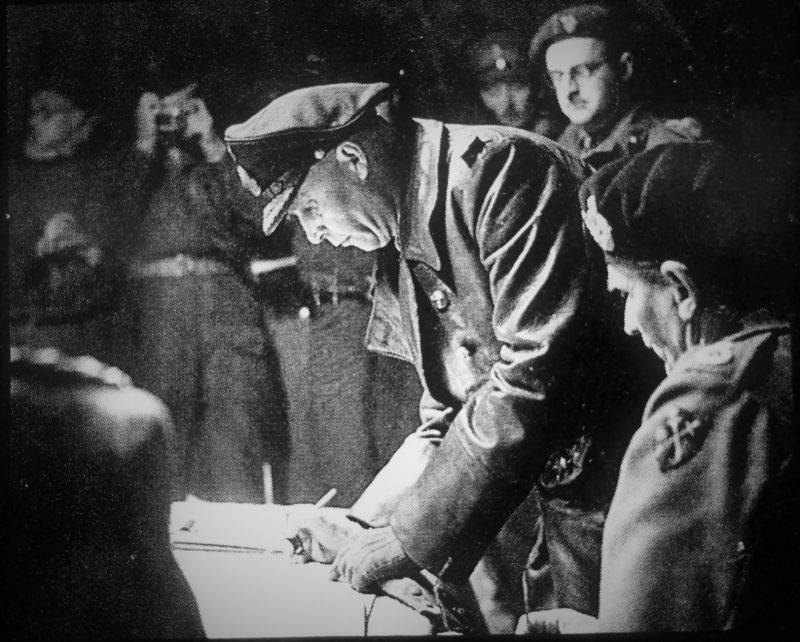 German Navy Commander Admiral General Hans-Georg von Friedeburg signs the surrender of German forces in northwestern Germany, Denmark and the Netherlands at the headquarters of the commander of the 21st Allied Army Group Field Marshal B. Montgomery
On May 5, Admiral Friedeburg, on behalf of Doenitz, arrived in Reims, at the Eisenhower headquarters, to solve the question of the surrender of the Wehrmacht on the Western Front. On May 6, representatives of the Allied commands were summoned to the headquarters of the High Command of the Allied Forces: members of the Soviet mission General Susloparov and Colonel Zenkovich, also a representative of France General Sevez. Friedeburg proposed to the representative of Eisenhower General Smith the surrender of the remaining German troops on the Western Front. Eisenhower conveyed to the German side that only a general surrender is possible, including formations on the Eastern Front. At the same time, troops in the West and East should remain in their positions. Dönitz decided that this was unacceptable and sent the chief of operations headquarters Jodl for further negotiations. However, he was unable to make concessions.

Under the threat of total annihilation, the Germans went on to surrender. They signed the surrender on May 7 and on the 8th they were supposed to stop the resistance. The act of unconditional surrender was signed on May 7 at 02:41 CET. From the German side it was signed by A. Jodl, from the Anglo-American command - the chief of the General Staff of the Allied Expeditionary Force W. Smith, from the USSR - the representative of the Headquarters under the Allies, Major General I. Susloparov, from France - F. Sevez. Already after the signing of the document, the Soviet representative was instructed from Moscow to ban signing surrender. 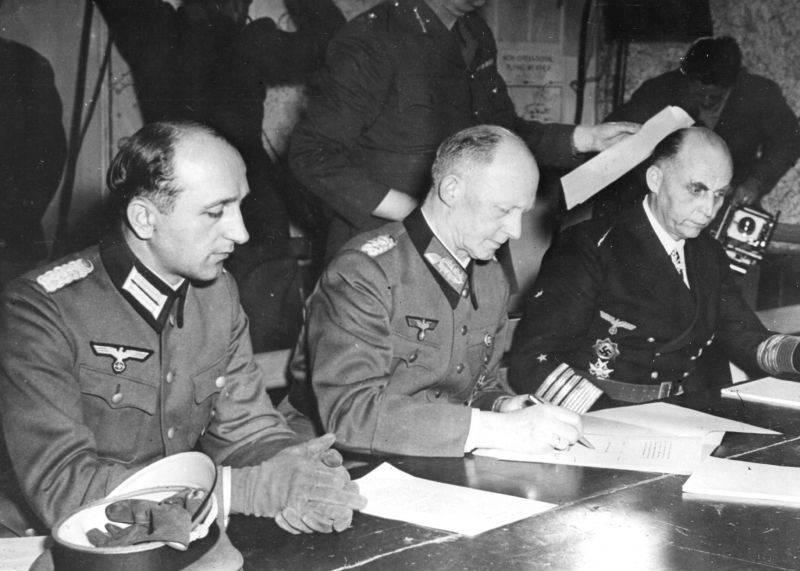 Colonel-General Alfred Jodl (center) signs the surrender of Germany at the headquarters of the Allied forces in Reims at 02.41 local time on May 7, 1945. Next to Jodl is Grand Admiral Hans Georg von Friedeburg (right), Jodlian adjutant Major Wilhelm Oksenius 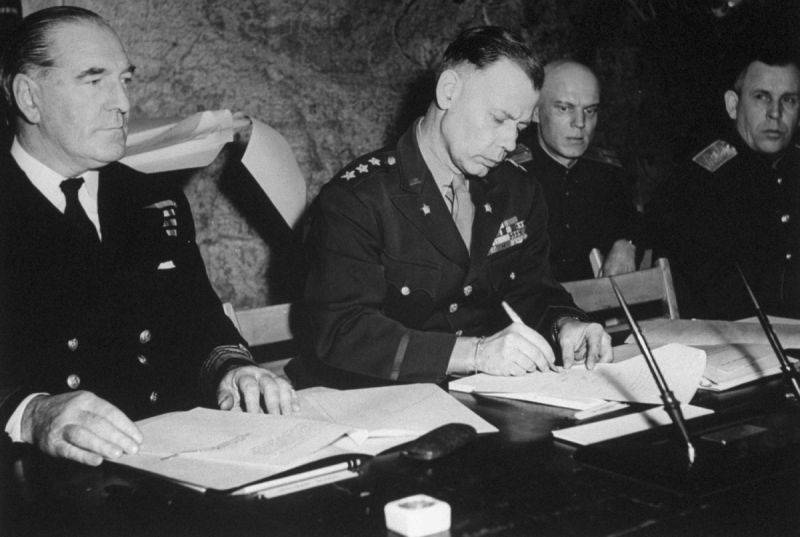 The Allied chief of staff in Europe, American Lieutenant General Bedell Smith, signed the act of German surrender in Reims on May 7, 1945. In the photo on the left is the chief of staff of the British Navy, Admiral Sir Harold Burro, on the right is the head of the military mission of the USSR in France, Major General Ivan Susloparov 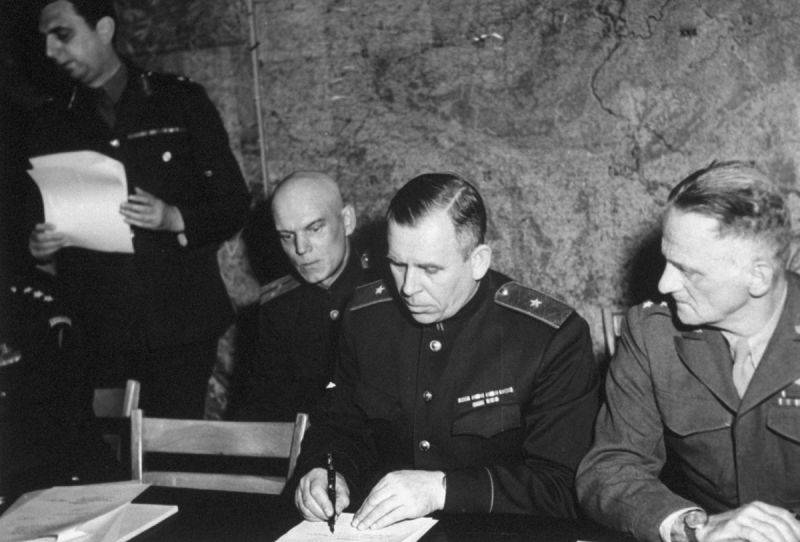 Major General Ivan Alekseevich Susloparov, the head of the USSR military mission in France, signs the act of German surrender in Reims on May 7, 1945. The photo on the far right is American General Karl Spaatz. To the left of I.A. Susloparova - his adjutant senior lieutenant Ivan Chernyaev


Dönitz and Keitel gave instructions to the Kesselring, Scherner, Rendulich and Lör formations to withdraw to the West as many divisions as possible, break through Russian positions if necessary, cease hostilities against the Anglo-American forces and surrender to them. On May 7, Count Schwerin von Krozig, Minister of Foreign Affairs of the Reich Government, informed the German people of surrender via radio from Flensburg.

At the request of Moscow, the Anglo-American command postponed a public announcement of the surrender of the Third Reich. They decided to consider surrender in Reims "preliminary." Stalin demanded that the surrender be signed in Berlin, taken by the Red Army. The document was to be signed by the high command of the countries of the anti-Hitler coalition. That was fair. England and the United States did not oppose. Eisenhower informed the Germans about this, they had no choice but to give consent.

On May 8, 1945, British President W. Churchill and U.S. President G. Truman made radio speeches reporting the surrender of Germany and the Victory. Churchill noted:

“... there are no reasons prohibiting us from celebrating today and tomorrow as the days of Victory in Europe. Today, perhaps we will think more about ourselves. And tomorrow we must pay tribute to our Russian comrades, whose courage on the battlefield has become one of the most important components of our common victory. "
On the night of May 8 to 9, 1945, in the Berlin suburb of Karlshorst, the Final Act on the Unconditional Surrender of Germany was signed in the building of the officer club of the former military engineering school. From the side of the Reich, the document was signed by the chief of staff of the Wehrmacht High Command, Field Marshal Wilhelm Keitel, representative of the Luftwaffe, Colonel General Stumpf, and the representative of the fleet, Admiral von Friedeburg. From the side of the Soviet Union, the document was signed by Marshal Zhukov, from the allies - Deputy Commander of the Allied Forces Marshal Tedder. 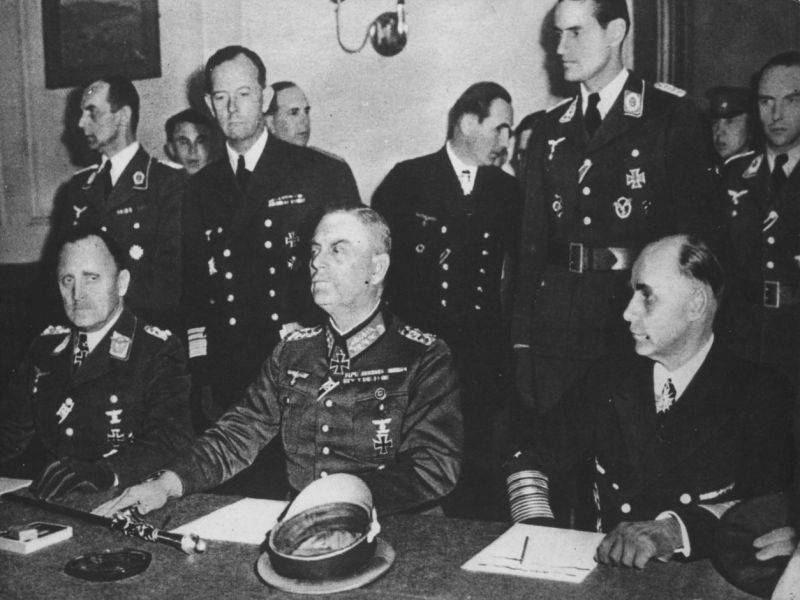 Representatives of Germany at the table during the signing of the Act of unconditional surrender. In the photo they sit from left to right: Colonel General Stumpf from the Air Force, Field Marshal Keitel from the Ground Forces and Admiral General von Friedeburg from the Navy 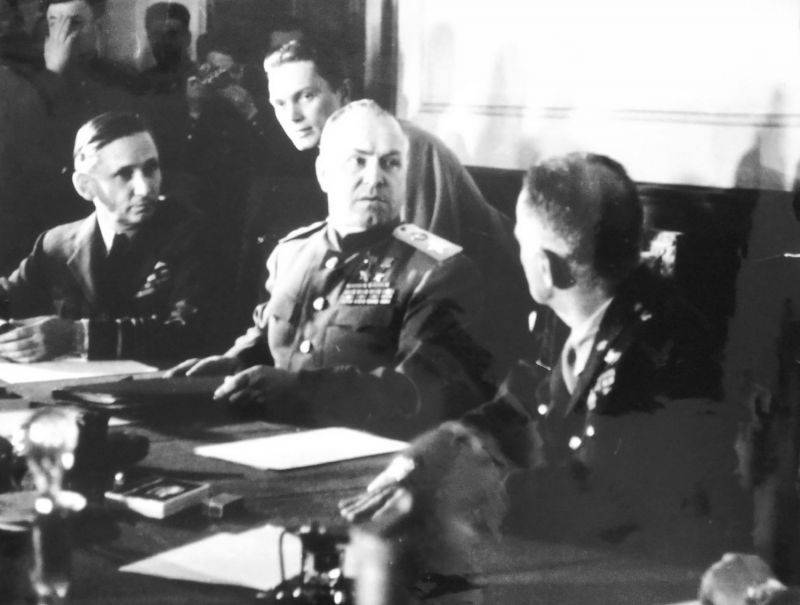 The representative of the Supreme High Command of the Red Army, the commander of the 1st Belorussian Front, Marshal of the Soviet Union Georgy Zhukov during the signing of the act of unconditional surrender of the German armed forces in the Karlshorst district of Berlin. To the right sits American General Spaats.
May 9, 1945 at 2:10 am Moscow time, the Sovinformburo announced the surrender of Germany. Announcer Yuri Levitan read the Act of Military Surrender of Fascist Germany and the Decree of the Presidium of the Supreme Soviet of the USSR declaring May 9 a Victory Day. The message was transmitted all day. On the evening of May 9, Joseph Stalin addressed the people. Then Levitan read out the order of the Supreme Commander for a complete victory over Nazi Germany and the artillery salute on May 9 at 22 p.m. with thirty volleys of a thousand guns. Thus ended the Great Patriotic War.

The remaining units, units and garrisons of the Wehrmacht, in accordance with the act of surrender, laid down their arms and surrendered. On May 9–10, Army Group Kurland, which was blocked in Latvia, capitulated. Separate groups that tried to resist and make their way west into Prussia were destroyed. Here, about 190 thousand enemy soldiers and officers surrendered to Soviet troops. At the mouth of the Vistula (east of Danzig), and on the Frisch-Nehrung spit, about 75 thousand Nazis laid down their arms. May 9, the Soviet troops captured 12 thousand. garrison of the island of Bornholm. In the north of Norway, the Narvik group laid down their arms.

Also, the Red Army completed the rout and capture of the enemy in Czechoslovakia and Austria. From May 9 to 13, over 780 thousand Germans laid down their arms on the southern section of the former Soviet-German front. On the territory of the Czech Republic and Austria, separate groups of Germans still showed resistance, tried to break through to the West, but in the end they were finished by May 19-20. As a result, from May 9 to 17, our troops captured about 1,4 million German soldiers.

Thus, the German armed forces and the Third Reich ceased to exist. On the initiative and insistence of Moscow on May 24, 1945, the German government of Dönitz was dissolved, its members were arrested. The Reich High Command was also arrested. All of them were considered war criminals and were to appear before the tribunal. All power in Germany passed to the authorities of the four victorious powers: the USSR, USA, England and France. It is worth noting that the occupation zone was allocated to the French only at the initiative of the Soviet government. Legally, the occupation was framed in the Declaration on the defeat of Germany on June 5, 1945. Subsequently, this issue was decided at the Potsdam Conference of Great Powers (July - August 1945). 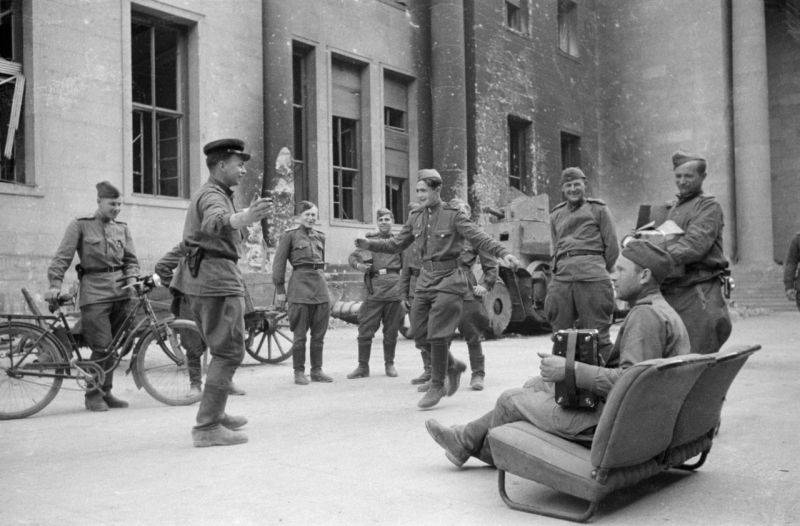 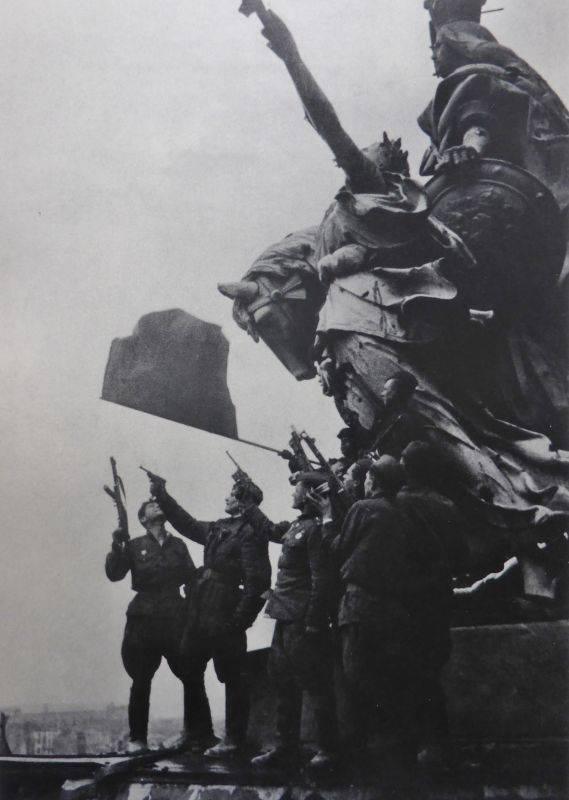 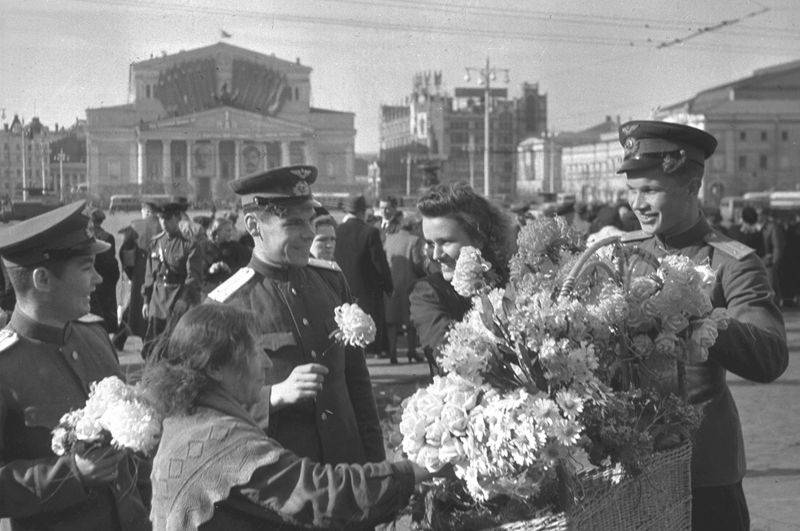 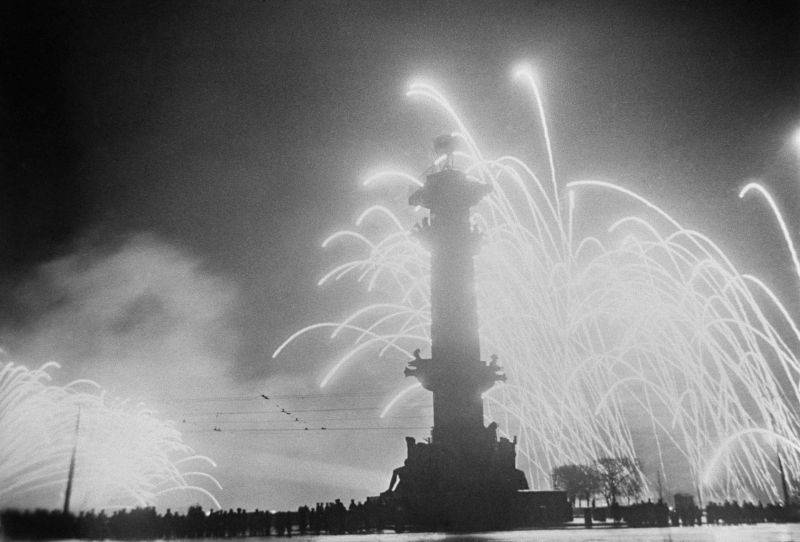 Salute in honor of the Victory on Pushkin Square in Leningrad

Ctrl Enter
Noticed a mistake Highlight text and press. Ctrl + Enter
We are
"The Last Fuhrer"Mysteries of the last hours of the Reich Chancellery
84 comments
Information
Dear reader, to leave comments on the publication, you must to register.