Missing. The fate of the fighters 134 gap 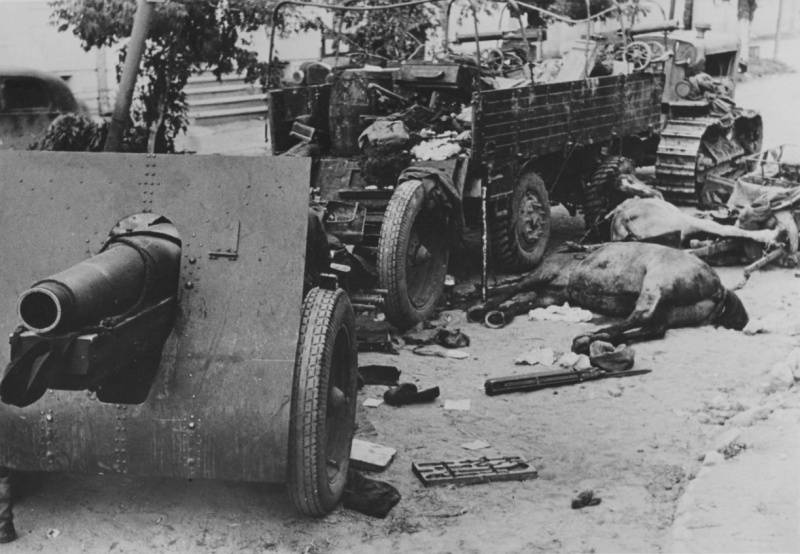 Continuing the study of the fighting for the city of Chisinau in 1941, the death of the battery of the 134th howitzer artillery regiment on the streets of the city, captured by romanian photographerstrying to understand the reasons abandonment of the cityreading bit by bit the collected information on military Chisinau, I discover unknown events and facts with which I consider it my duty to share with readers of Military Review.

Please help me find my son

A photo of a Romanian reporter and a mother’s request for a missing son connects the event on July 16, 1941 in Chisinau street. 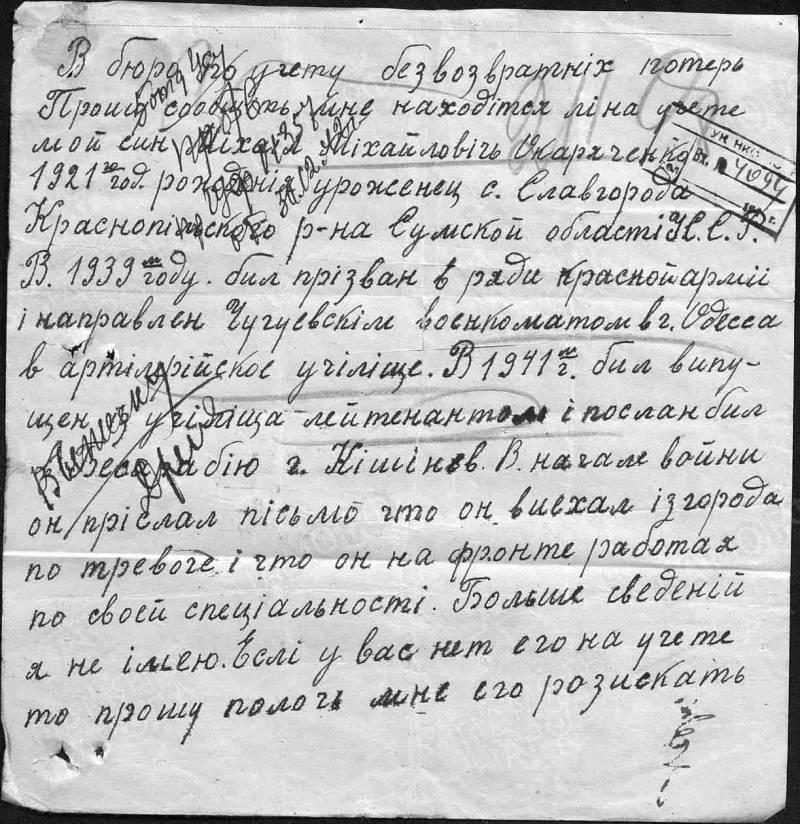 So it is described in the Soviet memoirs:

The 9th battery was marching along the city streets and suddenly came under fire tanks the enemy. The gunners did not even have time to deploy guns for firing at tanks and were forced to use only rifles, machine guns and grenades. The battery commander, senior lieutenant Khalamendyk, hiding behind the houses, organizes a circular defense, and the battery fights in the environment for several hours.
So this event is described by Romanian historians of World War II:

On July 16, the 1st Panzer Division launched an attack on Chisinau at 3:30, approaching the city of s. West and north east. The first group entered the city at 8:30, surprising the Soviet troops in Chisinau. Near the Metropolitan Company 3 Care e Lupta, under the command of Captain Viktor Gabrinsky, eliminated the cavalry squadron and the heavy artillery battery.
A week before these events. To understand the situation on the front of Moldova in the early days of the war (opposing the German-Romanian plan for the onset of Operation Munich), it should be noted that units of the Red Army showed quite serious resistance, went on the offensive, as evidenced by the documents of the 95th Rifle Division, into which included 134 hap. 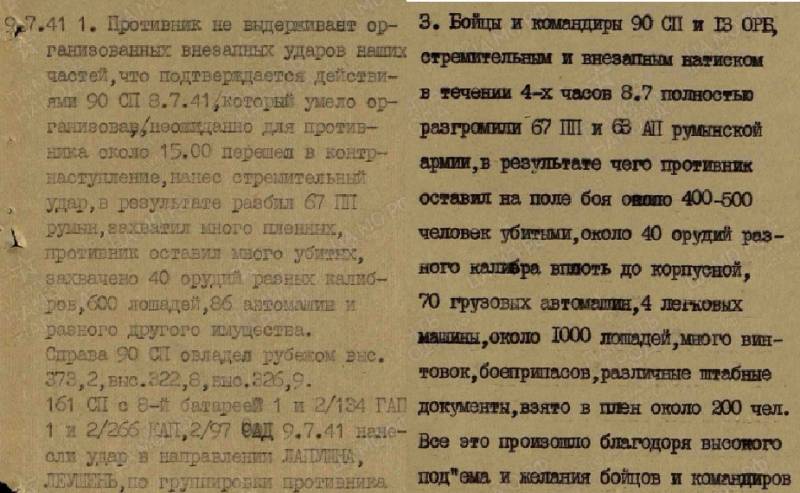 The same offensive was noted from the “other side of the barricade”:

The division commander managed to stop the retreating forces and reorganize the line of defense. In addition to the heavy casualties (as of July 15, the division had 177 killed, 2295 missing and 309 wounded), all equipment of the 63rd artillery regiment and two batteries of the 55th heavy artillery division were lost.
The worthy results of the first weeks of the war were reflected in the gratitude of the commander of the Southern Front, Army General I. Tyulenev.

Not one step back

No, this is not about the well-known order of the People's Commissariat of Defense No. 227 of 1942, where "alarmists and cowards should be exterminated on the spot."

It was an order. Major General Pastrevich, commander of the 95th Infantry Division. There were no such orders before this date. 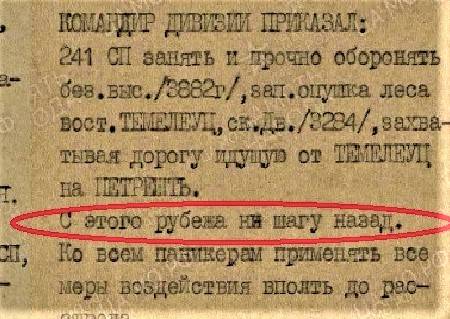 This did not help, and the retreat began. From the memoirs of a participant in the battles of Colonel Sakharov:

July 12, the division commander gives the order to go on the defensive at a profitable line. Soon a new order arrives: to move east from line to line.

The division received from the headquarters of the corps a plan for organizing the withdrawal of troops beyond the Dniester River. For me, like for many others, it simply did not fit in my head that I would have to retreat further to the east.

But the retreat began, and on a very wide front.

Early in the morning of July 15, the division headquarters arrives in Chisinau and is located in the area of ​​the Botanical Garden. By this time, instead of General Pastrevich, who had gone to the disposal of the Military Council of the 9th Army, Colonel M.S. Sokolov, the chief of staff, took command of the 95th division, and I began to act as chief of staff of the division.
The memoirist could not give a stamped fact of why the division commander left the command, but open archives fill the gap. 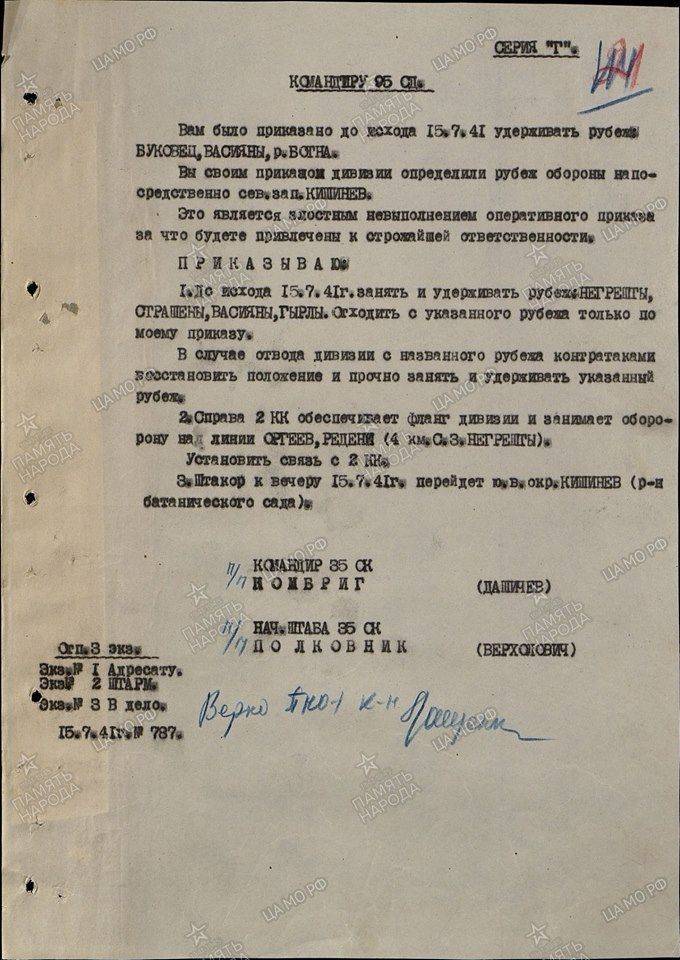 It would seem that this threatened with execution: they would bare the front on their own, but Pastrevich was not shot for the unauthorized retreat. After the academy, he ended the war as a division commander.

How much this offensive was justified and thoughtful, and how much the front commander did not inform the Headquarters of the retreat, later Stalin I.V. will say in a conversation with S. Budyonny:

Mention of the situation preceding the capture of the capital of the MSSR is necessary, because confusion, loss of communication with the units, lack of interaction and assessment of the situation among the commanders of units and formations could not but affect the Red Army and unit commanders.

Personnel decisions and the severity of orders did not help much, and by July 15, Chisinau was the immediate task of the Romanian-German divisions, and at that time 132 gap batteries and infantry units were retreating through the city, obeying the order to occupy new lines of defense beyond the Dniester, in Tiraspol UR.

Romanian Relations on the Execution of Operation Munich:
At 11:30 the advance of the second group was stopped by Soviet troops on the Ryshkanu hill, which were later knocked out of position by the 2nd battalion with the support of all available heavy artillery. Red Army Retreat Road to Tigin (Bender) was blocked.

Here, Romanian historians are not quite right, because the units broke through with battle and left the city until evening:
We reached Chisinau, and there the battalion commander Major Vrutsky led the regiment in the center, sitting on a white horse. Although we put up military guard, but the fighters, realizing that around the Germans were afraid to leave, were huddled to the main column.

The Germans let us into the center, and then opened heavy fire from the houses, from all sides. Major instantly flew off his horse and threw him. Leaving the wounded and killed, they began (as best they could) to leave the city. Coming out of Chisinau, they gathered again in a convoy - fifty people, the rest lay down on its streets. The major also appeared.

To break away from the pursuit (German tanks followed us), we could only because someone had guessed to send us tanks that drove them away. They went to the old border along the Dniester, completely surrendering to Bessarabia. They thought that there, in the old fortifications, we would stop them. But the Germans again broke through the defenses on the right and went behind us, and again we began to withdraw. "
(From the memoirs of the lieutenant of the 90th regiment of the 95th rifle division A. Pulyaev.)

Episodes of sudden clashes on July 16, 1941 are described in the memoirs of the chief of staff of the 95th division of Sakharov’s peninsula:
Gunners and foot soldiers together go east. The 7th battery is also fighting bravely. Turning right on the street, she opens fire direct fire at tanks and infantry of the enemy. At the most difficult moment, the 7nd battery of the 2th howitzer regiment comes to the rescue of the 134th battery. The commander of the fire platoon, senior sergeant I. B. Yermoshin, deploying guns, shoots direct fire at an enemy motorized convoy. By evening, a battery of three guns arrived in the city. Colonel Serebrov places them at the intersection of streets for firing in three directions. Somewhere nearby German tanks rumbled. And indeed, after a few minutes one tank appears from behind the turn and immediately opens machine-gun fire. Serebrov commands the guns: “Fire on the tanks!”

The reflection of memoirs is confirmed in photographs of Romanian officers made in Chisinau center the next day: 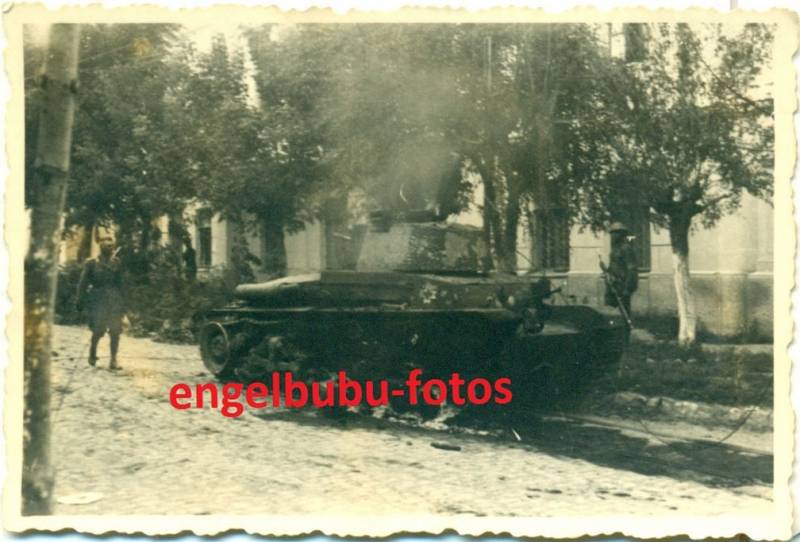 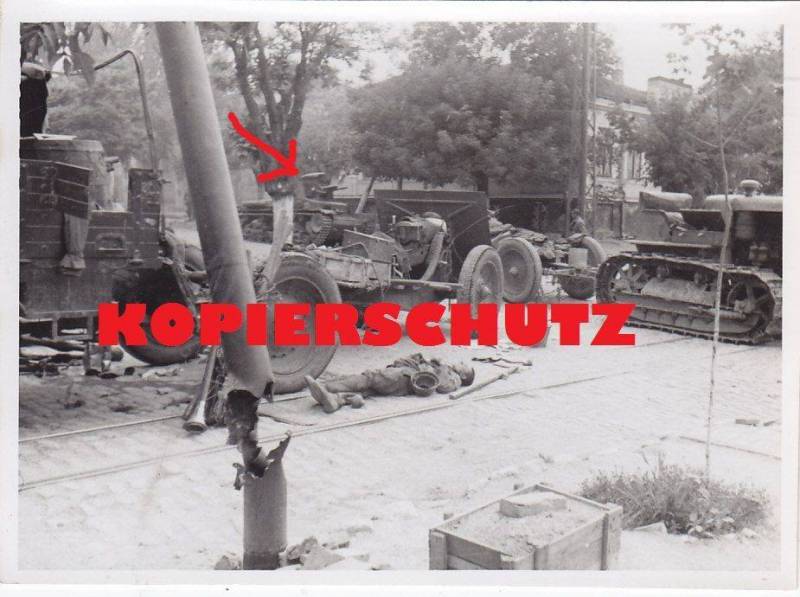 The details of the photographs show how fierce one of the fights was.

According to the lists of irretrievable losses, 6 Red Army men died that day, not buried - “left on the battlefield”. 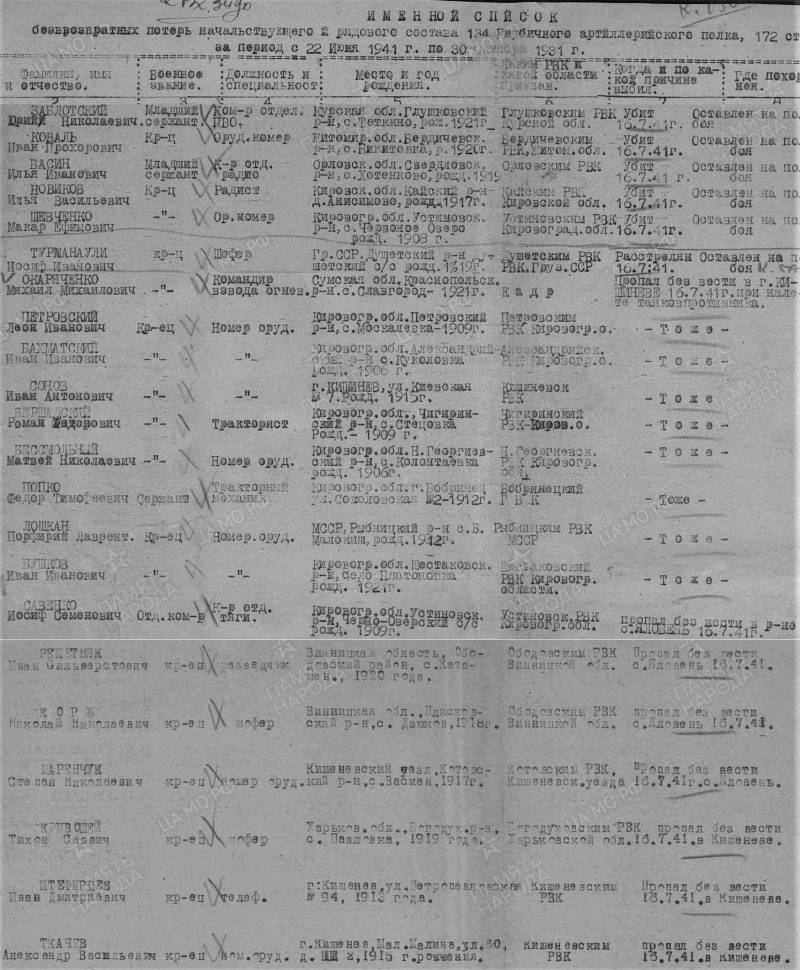 18 were missing in the city and on its outskirts, 1 was shot. (order of the commander "Not a step back").

Everything is formally determined with the heroically dead fighters, families received a funeral, and new figures replenished the statistics of huge casualties of the Great Patriotic War.

But what happened to the missing? The war went on for less than a month, everything has changed, the situation, values, life. Everything has changed to "before" and "after." Yesterday's peaceful people were hardly aware of the seriousness of the situation and understood what was happening. Many commanders, military personnel at this stage were not always able to give an account of their actions and orders, stepping over the edge of peacetime exercises and real military operations. This is not a topic for speculative conclusions and issuing a “verdict” to the soldiers of that time from today. This is a given that must be understood when studying those events.

What happened to the fighters? Deserted, taken prisoner, behind their retreats, died or abandoned, shot during capture?

In Chisinau, a raid was organized in the morning of July 17, accompanied by a check of documents, general searches, beatings of residents and robbery. According to the Romanian authorities, the raid resulted in a pogrom that lasted 8-10 days. In revenge for the losses suffered in the night battle, 160 men captured in the central quarters of the city, soldiers of the 72nd Wehrmacht Infantry Division shot in the courtyard of the Italian Consulate.
(ON RM. F. 680, Op. 1 LL 10,11 Unirea. 1941 23 iulie.)

In the list of missing people in the battles for the city there were three fighters, a resident of Chisinau, and it was suggested that they could get out after the battle with their comrades, “leave the yards”, hide from the raid and avoid capture. In war, miracles happen that go against the dry statistics of combat reports.

In order to establish more fully the outcome of the events of that battle, to try to clarify the fate of the missing fighters, possible databases were used (including the Immortal hut, well, you never know, maybe they were repressed as traitors, but no).

The search was successful.

Unfortunately, the request of the mother of Lieutenant Okoryachenko Mikhail Mikhailovich, published at the beginning of the article, could not be found other than the official one.

Of the missing fighters of the destroyed battery, 134 gap managed to find these people:

The idea that a lot of material has been written with seemingly unnecessary details and third-party descriptions, and all in order to lay out the discovered names and names of the soldiers who took the fight in Chisinau, listed in the reports as missing, do not let me go.

Perhaps this is right, arguing before the reader, to share with him the opportunity to understand the causes and consequences of just one small episode and attempts to find out the fate of missing people.

Just one episode for two dozen soldiers of the same regiment on a vast territory from the Black to the White Sea, just one day of the war. How many such forgotten or unknown episodes were in the war, where people were killed, breaking destinies and betraying oblivion? Hundreds and hundreds of thousands ...

One unknown event was less, and the list of lost in stories after 70 years, someone reads the names of the fighters again. It was worth looking for.

The path of the artillerymen of the 134th regiment, air strikes, deserters, retreats under fire, direct guidance of 152 mm howitzers on the enemy infantry, the defeat of two batteries near Chisinau was difficult. The list of losses traces all the way through Moldova, and then the defense of Odessa, the evacuation and heroic defense of Sevastopol. 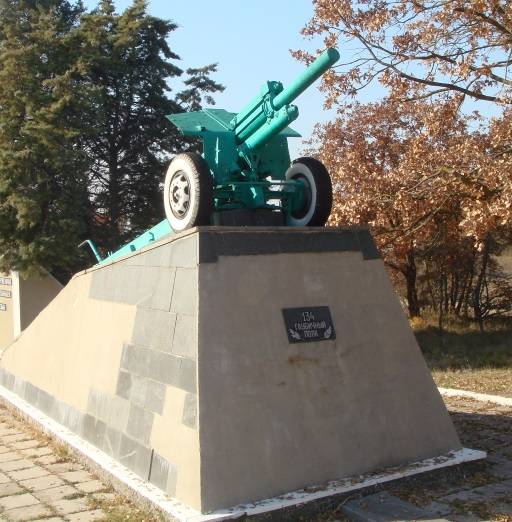 On the 16th kilometer of Simferopol highway, a howitzer stands on a monument - a nominal monument to the soldiers of the 134th howitzer artillery regiment.

Ahead - Victory, woven from thousands of episodes and paid for by millions of lives.

We are in Yandex Zen
Two romanian sleeves. Chisinau, 1941
Nikolay Lebedev. Thunderstorm Romanian 1st Panzer Division
17 comments
Information
Dear reader, to leave comments on the publication, you must to register.