How Soviet soldiers-liberators turned into "rapists" 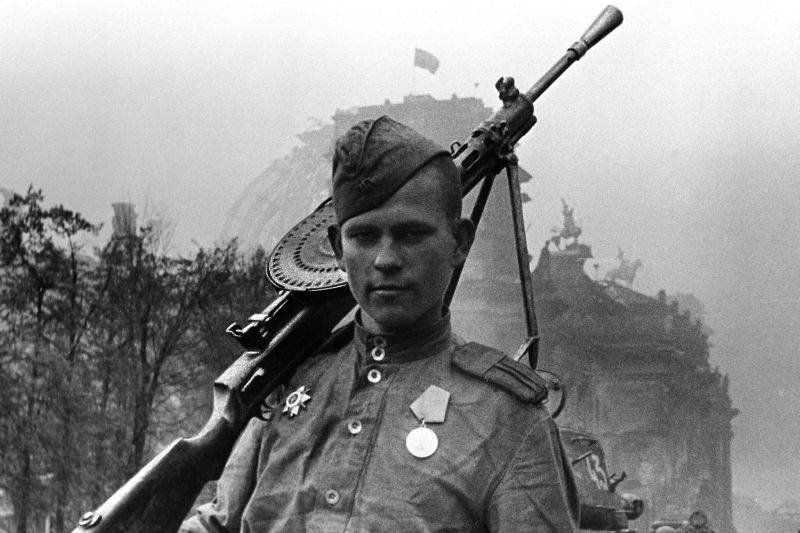 The commander of the machine gun crew of the 902th rifle regiment of the 248th rifle division of the 9th rifle corps, the foreman of the 1st Belorussian Front, the foreman, Viktor Nikolayevich Levin (b. 1923) with a light machine gun DP at the Reichstag

In the West, so rewrote history World War II, that Russia became the main culprit of war crimes against European peoples. The Russians were transformed from the liberators of Europe into "invaders, looters and rapists."

“We will avenge the Russians for Hiroshima!” - so say the Japanese students. A significant part of the current youth of the Land of the Rising Sun does not know that Japanese cities were destroyed not by Russians, but by Americans. In the XNUMXst century, the media can make black white and vice versa. In the West and practically all over the world, perhaps, except for Russia (and even active attempts to make Vlasov and Krasnov heroes are being made) and Belarus, the history of the Second World War has already been rewritten as it suits Western rulers.

Western media have long assured the whole world that Germany was defeated by strategic aviation USA and Britain, the defeat of Rommel at El Alamein in Africa and the landing of the Allies in Normandy. Unfortunately, the vast majority of residents of the United States and Europe believe in this myth. No one is interested in the fact that the Red Army defeated most of the German divisions; that the Russians liberated almost all the capitals of Europe from the Nazis; that the Russians took the German capital - Berlin. Facts and analysis are the destiny of a few; consumers believe in a beautiful picture.

Moreover, in the West, the history of the world war was already rewritten so that Russia became the main culprit of war crimes against European peoples. The USSR and the Third Reich, Stalin and Hitler, communism and Nazism are put on the same line. In addition, the promising development of the theme “Hitler is the defender of Europe against the Russian communist threat” is already being traced. The Russians were transformed from the liberators of Europe into "invaders, looters and rapists."

How liberators turned into "rapists"

This has not always been the case. In May 1945, and in the first decades after World War II, Russians, in the minds of Europeans, and Americans, were liberators of Europe, great victorious soldiers. So, on the eve of the 75th anniversary of the Great Victory, specialists of MIA “Russia Today” have studiedthat the leading newspapers of Britain, the USA and France wrote in May 1945 about the Red Army and the USSR: The Times, The New York Times and Le Monde.

It is not surprising that then Russia and Russian soldiers were rated at least moderately positive or enthusiastic. Honor reigned in the West, universal respect and gratitude to the Red Army and the Russian soldier.

“The contribution of the great Russian ally is invaluable: it was the Russian side that for three years endured almost all the pressure from the Wehrmacht.”
May 9, 1945, Times, Winston Churchill:

“Tomorrow we will pay special tribute to our Russian comrades, whose skill on the battlefield has become one of the main contributions to the common victory ... on this day, Western nations will proudly express their respect to the invincible ally, Russia, which, sacrificing its lives and suffering material destruction , took upon itself the heaviest burden of all united nations. ”
In other articles of these publications and in other newspapers during this period they expressed admiration for the “great Russian ally”, spoke about the “invaluable” contribution to the victory of the USSR and the Soviet people, the “unthinkable victims” that the Russians made to win, about “courage and insights ”that led Russia to victory, etc.

It is clear that after the outbreak of the Cold War (hybrid third world war) the tone of the Western press has changed. Western leaders began to reformat the image of the USSR from a "liberating power" into an "evil empire" that wants to enslave a free Europe and destroy "democracy and freedom." True, this could not be done quickly. For years, Russians have been shown as liberating heroes who have broken the backbone of Nazism and fascism in Europe. Firstly, the possibilities of the media were then significantly inferior to modern ones. The process was lengthy.

Secondly, all the inhabitants of Europe were witnesses, participants and victims of the war. They witnessed how Russian soldiers liberated Bucharest, Sofia, Warsaw, Budapest, Bratislava, Vienna and Prague. The Poles, the Dutch and the French remembered the horrors of the German occupation. The British remembered the enemy air raids, the struggle at sea, the Arctic convoys and the stories of the Russian military successes on the radio. For hundreds of thousands of Jews around the world, including Americans, Russian soldiers were genuine liberators and savior. American veterans remembered the Soviet allies, the meeting on the Elbe.

That is, it was impossible to rewrite history immediately. Objective reality was in the memory of the overwhelming majority of the planet's population in 1950-1960. In 1970-1980, the situation began to change, but it was still far from a radical turn. The “wrong hero” in the world, a Russian soldier, had to endure for many decades until the old generations left, who saw everything with their own eyes, until they rewrote history books in schools and institutes, until the media completely processed the consciousness of the “world community”.

Step by step, drop by drop, but at the beginning of the XXI century the information agenda was completely reformatted. A major role in this process was played by the “thaw” of Khrushchev, who himself gave the West an informational occasion to persecute the Russians. The "World Community" did an excellent job of the liar Solzhenitsyn map (“Why did they create the myth of the great writer, the Pravdorub Solzhenitsyn?”) During the "perestroika" in the USSR, in the footsteps of Solzhenitsyn, the "crimes of the bloody Stalinist regime", the Ribbentrop-Molotov pact, which allegedly led to the "Soviet occupation" of the Baltic states, Eastern Europe and the "unjust" Soviet-Finnish war, were hanged. Poland was declared "Hitler's first victim", although the Poles, together with the Fuhrer, arranged a division of Czechoslovakia. The “best German” Gorbachev hanged Katyn on Russia, although the facts show that the Polish officers were shot by the Nazis.

In the 1990-2000s, when all dogs could be hung on Russia, in the West they were no longer embarrassed at all. A monstrous myth arose that the Russian soldiers "raped in Germany all Germans aged 8 to 80 years." There are no real facts, but the intellectual, educational level of the consumer of the “world community” has sagged so much that the media can already sculpt anything. Since the second half of the 2010s, after the coup and the war in Ukraine, the image of the Russian soldier-liberator was almost destroyed. Now you can come up with almost anything, the average man will eat. In particular, to tell that only Ukrainians fought on the Ukrainian fronts, that Ukraine is “a victim of the Stalin and Hitler occupation”. That Bandera fought for freedom and independence, fighting against the Nazis and the Red Commissars.

Thus, the “world community” has completely revised and rewritten the results of World War II. The following topics dominate in the global information space: the Hitler-Stalin agreement on the division of Europe, “the Russian occupation of Eastern Europe”; occupation of Poland by Germans and Russians; USSR war against “peace-loving” Finland ("The myth of the aggression of the" criminal Stalinist regime "against the" peaceful "Finland"; Part 2); Battle of Britain and the Pacific, African Campaign and Allied Landing in France; the liberation of Europe by the allied armies and the "occupation by Russian barbarians" of Eastern Europe. The current “victory” of the Prague town politicians over Marshal Konev is only a fraction of the information war of the West against Russia. 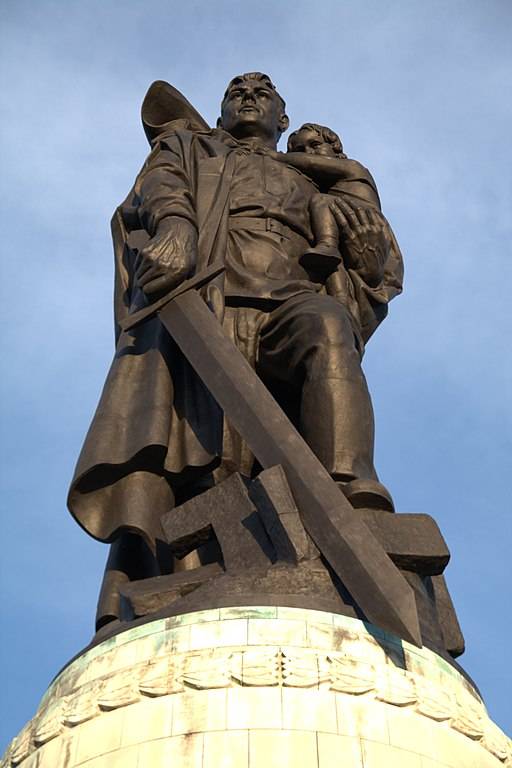 "Liberator Warrior" - a monument in the Treptower Park in Berlin. Sculptor E.V. Vuchetich, architect J. B. Belopolsky, artist A. A. Gorpenko, engineer S. S. Valerius. Opened May 8, 1949. The monument “Warrior-Liberator” is a symbol of the victory of the Soviet people in the Great Patriotic and World War II and the liberation of the peoples of Europe from Nazism

We are in Yandex Zen
About Stalin and Khrushchev
What you didn't want to know about England
137 comments
Information
Dear reader, to leave comments on the publication, you must to register.