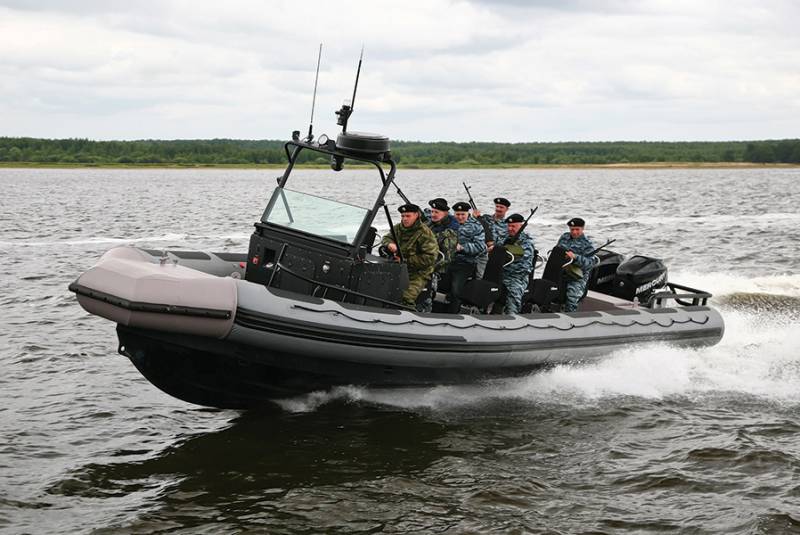 BK-10 boat with crew and landing

Russian shipbuilding offers naval the fleet a number of small and light boats and boats capable of providing transportation of personnel, landing on shore and fire support. One of the most interesting specimens of this kind is a high-speed assault boat, pr. 02450 or BK-10. For all its simplicity, it proves to be a very effective tool for solving a wide range of problems.

The development of a new assault boat for the Navy and other structures was carried out at the beginning of the tenth years by the Rybinsk Shipyard enterprise, which is now part of the Kalashnikov concern. The aim of the project was to create an easy high-speed watercraft capable of transporting up to 10 people or a similar load, carrying weapons, etc.

Creation of Ave. 02450 / BK-10 did not take much time. Already in 2012-13. a promising sample was tested and demonstrated at exhibitions. In 2015, it was possible to complete the entire range of tests, including state ones. Soon, a serial production contract appeared, and in 2016, shipments to the Ministry of Defense began. 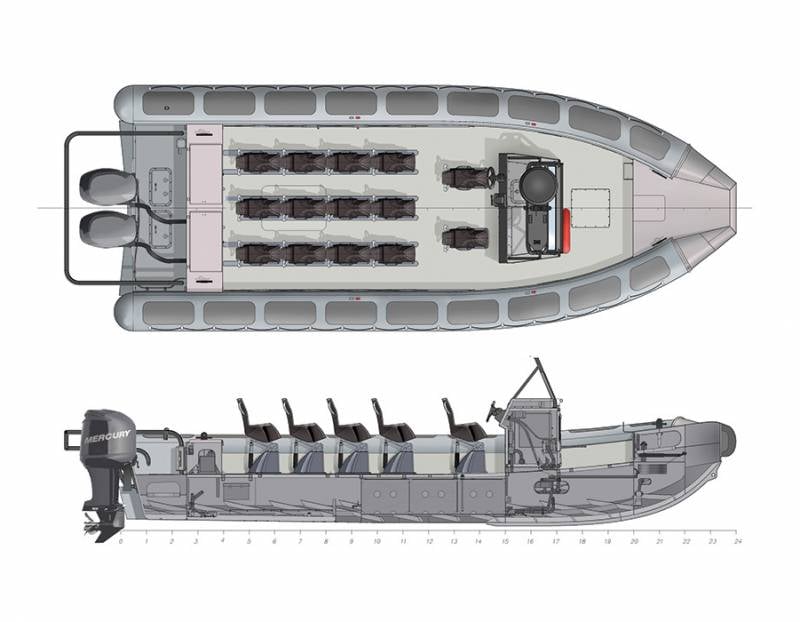 To date, the Russian Navy has a certain number of serial BK-10; equipment is used in the interests of the marines and various special forces. In addition, the boat was able to enter the international market and receive the first foreign orders.

BK-10 is a rigid hull inflatable boat of traditional design and layout. The case is made of aluminum-magnesium alloy, a rubber inflatable balloon is installed around the perimeter of the side. The control post, crew and passenger / cargo areas are located on the open deck. At the stern, the power plant is fixed in the form of outboard motors.

The length of the boat is 10,5 m with a width of 3,7 m and a maximum height along a raised mast with equipment of 4 m. Normal draft is 600 mm. Own weight of the structure - 3,7 tons, total displacement - 6,1 tons. Limited dimensions and weight allow transportation of the boat by land. For this, a car trailer is included in the delivery. 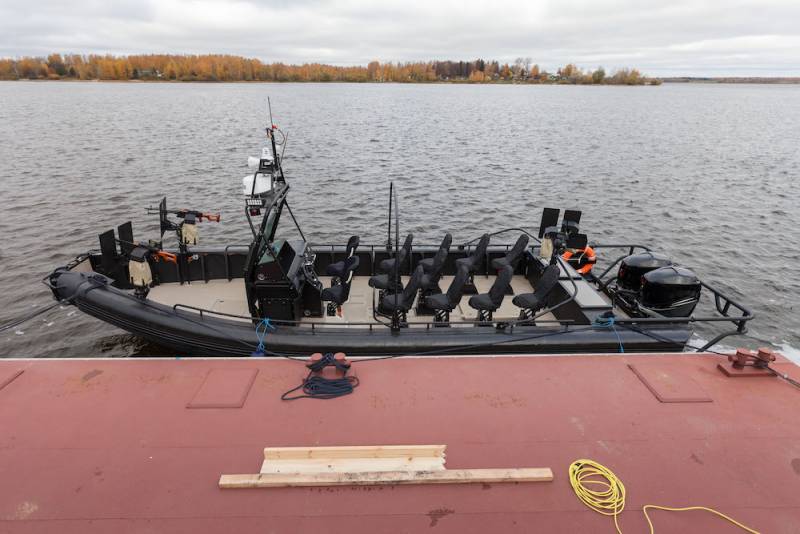 BK-10 can be equipped with two outboard motors, the type chosen by the customer. Serial boats for the Russian Navy receive gasoline engines Mercury Verado 300 with a capacity of 300 hp. Use of other units with power up to 350 hp is possible. Regular 300-horsepower engines provide a cruising speed of 28 knots and a maximum of 40 knots. The economy range is 400 nautical miles.

In the bow of the deck are the control post and two crew seats. The antenna of the navigation radar was raised above the post using the U-shaped mast frame. The crew can control all on-board systems, keep in touch, etc.

Behind the crew seats on the deck in three longitudinal rows is 12 landing seats. The design and location of the seats provide sufficient convenience for boarding, traveling and disembarking. Landing from a boat on the coast can be carried out both overboard and along the bow ramp dividing two inflatable balloons. If necessary, a fabric tent can be installed above the deck. The installation of onboard armored elements covering the crew and the landing is provided. 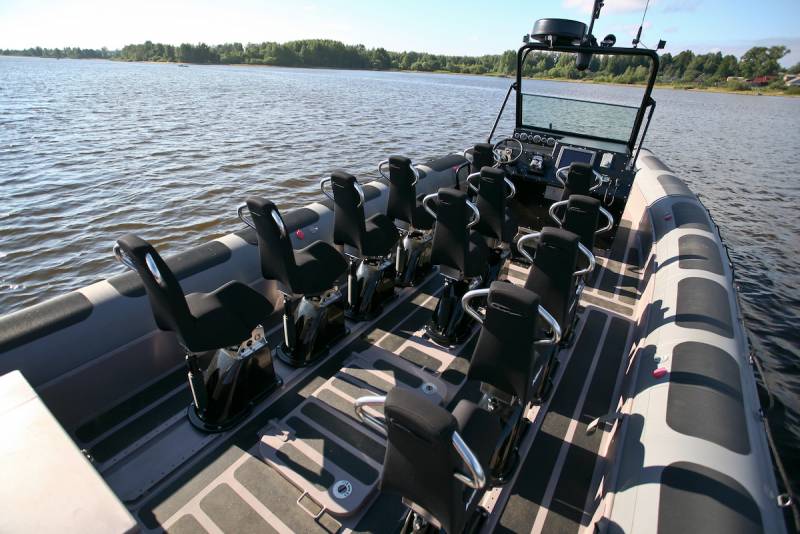 Boat Ave. 02450 is capable of carrying weapons. On the nose, in front of the control post, one or two thumbs are mounted. The boat is equipped with two PKM machine guns or one automatic grenade launcher. In addition, the landing can use personal weapon - the absence of a high side does not interfere with firing in all directions.

In fact, BK-10 is a universal tool for solving a wide range of tasks. With its help, it is possible to deliver and land landing groups, including by supporting machine-gun-grenade launcher fire, carry out evacuation, deliver small loads, etc. BK-10 can be used in both military and humanitarian operations.

Together with the base boat BK-10 Rybinsk Shipyard offers several of its modifications with different features and capabilities, as well as with certain advantages. 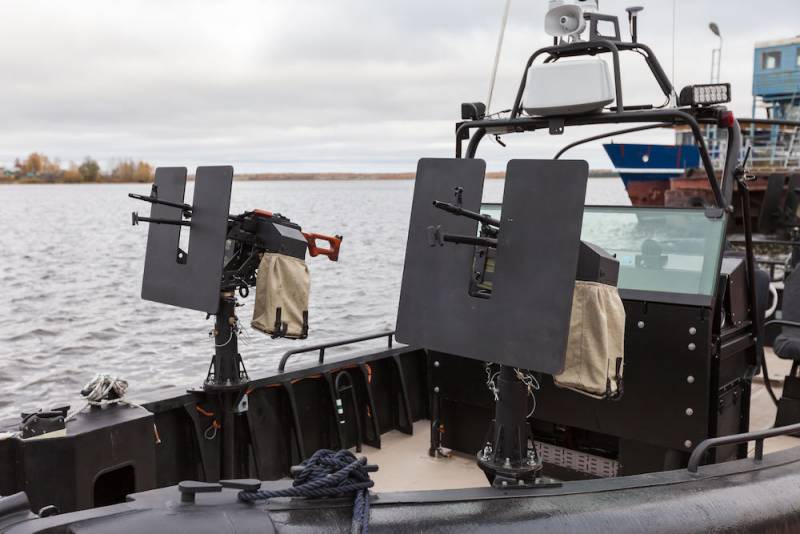 The BK-10M high-speed assault boat is distinguished by a hull extended to 11,2 m and a total displacement of 8 tons. The aft part of the hull is made in the form of a platform with a hatch under which there is an integrated power plant. The boat is equipped with two engines with a capacity of 370 hp. and has two propellers.

On the sides of the stern provides for the installation of two installations for weapons. The third is stored on the nose, in front of the control post. The bow mount is designed for a heavy machine gun or grenade launcher, and the stern should carry weapons of normal caliber.

The BK-10D / DE boat is 435 mm longer than the M version and has a displacement of 9,3 tons. It also receives internal engines, but their power is brought up to 436 hp. Changed the layout of weapons. In the bow there are two installations for PKM machine guns, in the stern - one for larger weapons. 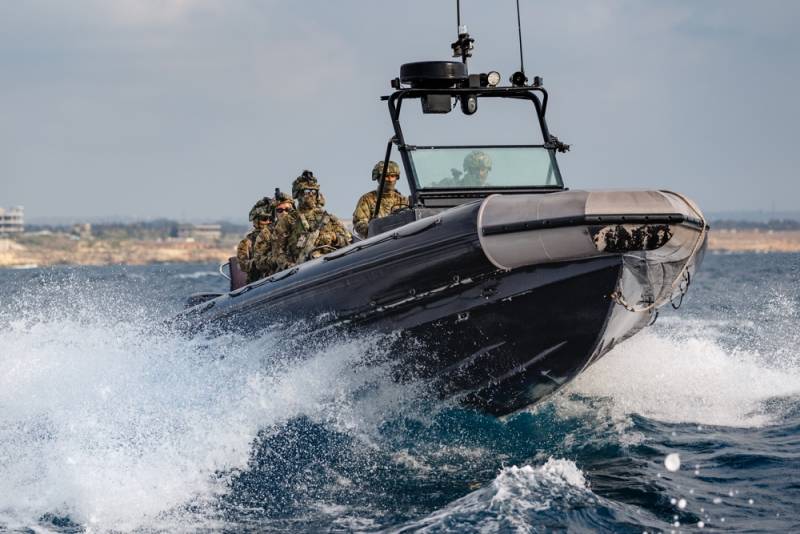 The main feature of the BK-10D project is the ability to land from the Il-76 military transport aircraft. A boat with a special parachute system is thrown out through the aft ramp, and then sinks into the water, ready to solve the tasks.

For country and for sale

The construction of the BK-10 serial boats started in 2016. By the middle of the year the first instance was ready, and by the end passed acceptance tests. Shortly after that, the official service of equipment as part of the Russian Navy began.

In August 2017, the first relatively large contract for boats of the Kalashnikov concern was signed at the Army forum. Together with other equipment, the Ministry of Defense ordered 11 speed boats with delivery in 2017-18. Nine units were required to be built according to the initial project 02450, two more - according to the "landing" version of the BK-10D. Interest was reported on the part of the Russian Guard, but at that time this structure was not yet going to place an official order. 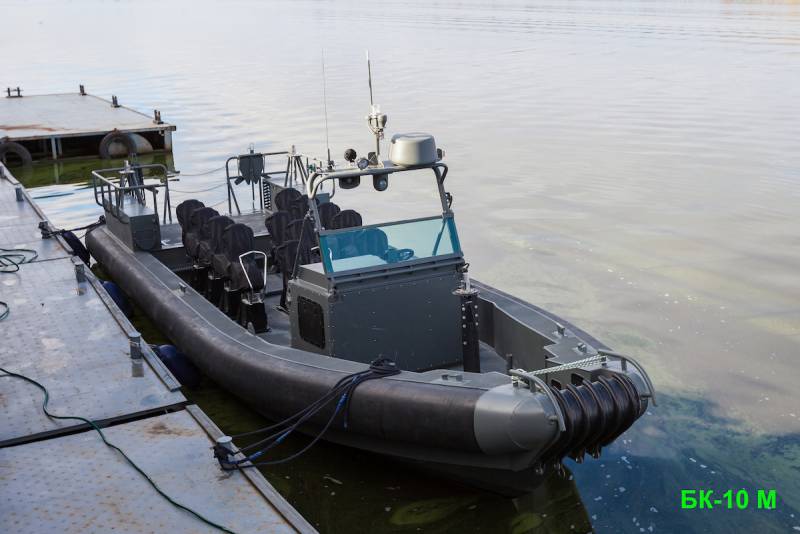 Boat BK-10M. Noticeable differences in the stern
The 2017 contract has long been completed, and the Navy has several modern light multi-purpose craft. They are used in the interests of the marine corps and naval special forces.

In 2017, it was reported that some foreign countries showed interest in Russian boats and boats. Potential buyers could be the armies of Argentina and the Philippines. However, in the future, these news did not receive a continuation.

At the International Naval Salon of 2019, it was announced that the Kalashnikov concern had concluded contracts for the supply of light craft of Rybinsk development to a foreign customer, and the process of transferring products was already beginning. The buyer and model of the supplied boat were not named. 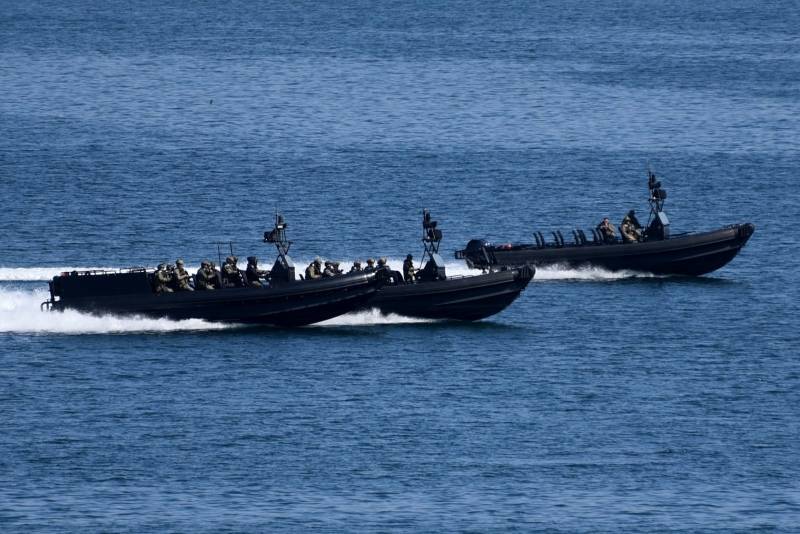 Speed ​​boats "Kalashnikov". In the foreground is the airborne BK-10D, in the distance - BK-10
In mid-April 2020, new export reports appeared. Curiously, this order was called the first export in stories BK-10. A number of boats were sold to an unnamed country from sub-Saharan Africa. The last time our “marine” products went to this region more than 20 years ago. Now military-technical cooperation is being restored - so far with the help of small high-speed boats.

The appearance of a high-speed assault boat, project 02450 / BK-10 and other samples of this class made it possible to close not the most noticeable, but important niche. Our fleet, and accordingly the marine corps or combat swimmers, has got a modern convenient multi-purpose vehicle that meets their requirements - in addition to domestic development and production.

The production of BK-10 boats in different versions has been launched and has been going on for several years, which over time will help to close all the needs of the fleet and other structures. In addition, our industry with a new project was able to enter the international market and receive a real order. All this shows that the BK-10 project was very successful and useful.

We are in Yandex Zen
Airborne assault boat BK-16: a new member of the Syrian operation
"Svetlana". History of creation
15 comments
Information
Dear reader, to leave comments on the publication, you must to register.