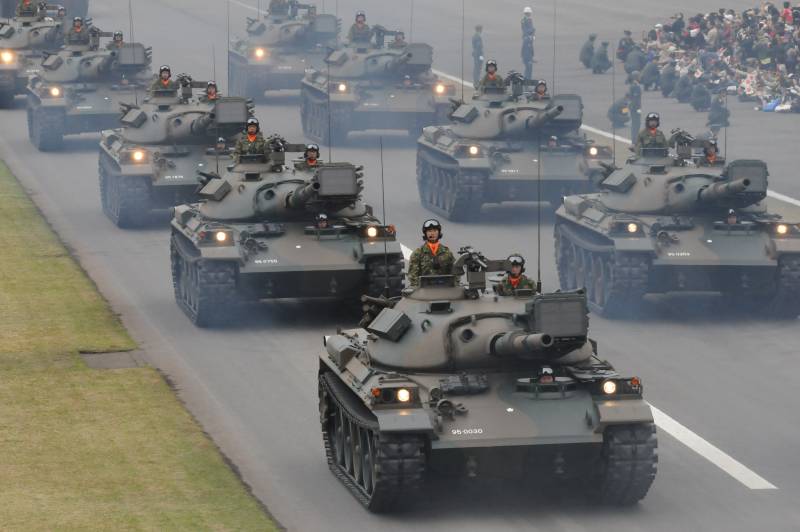 A few years ago it became known about the plans of the Japanese Ministry of Defense in terms of modernizing the fleet of equipment of the Land Self-Defense Forces. Among other things, these plans provide for the gradual decommissioning of the main battle tanks of the old types with their simultaneous replacement with modern equipment in the form of wheeled armored vehicles "Type 16". The latter has already gone into series and is entering the troops.

The Type 16 combat vehicle with cannon and machine gun weapons or the Maneuver Combat Vehicle (MCV) is a “wheeled tank” created with the new plans of the Self-Defense Forces. The main requirements for the "Type 16" affected combat qualities and mobility. It was necessary to ensure combat qualities not lower than the old MBT “Type 74”, as well as improved mobility and the ability to transport by air existing and promising military transport aircraft.

The development of the future MCV was carried out by the Technical Research & Development Institute; Mitsubishi Heavy Industries entrusted the production of experienced and serial equipment. Development work has been ongoing since 2007, and soon the first prototype was submitted for testing. State tests were held in 2014-15, after which the Type 16 received a recommendation for adoption.

Based on the requirements, a 26-ton machine was created on a four-axle all-wheel drive chassis with a 570-hp diesel engine. Armor protects small-caliber guns and rocket-propelled grenade launchers from fire. Armament in the form of a 105-mm rifled gun and two machine guns of different calibers is mounted on a triple tower. The car has a speed of up to 100 km / h and has a power reserve of 400 km. 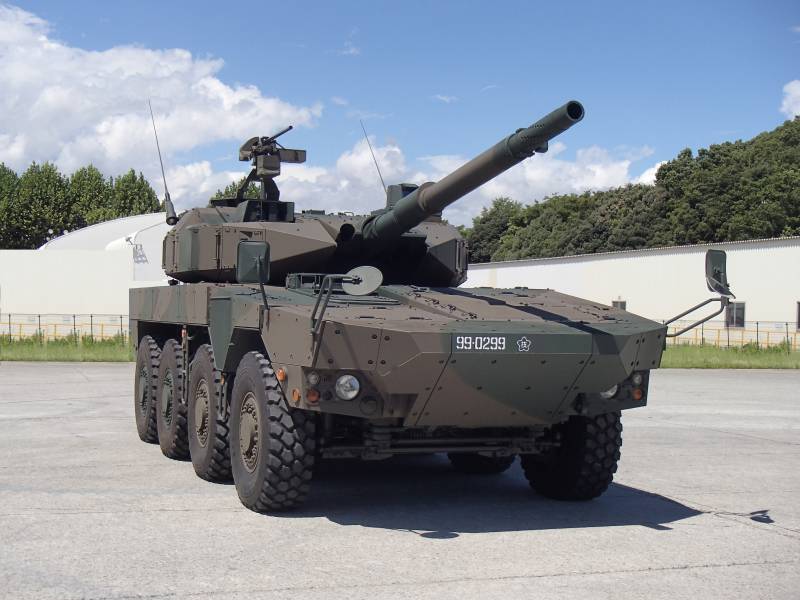 The first order for serial production of MCV wheeled tanks appeared in 2016. It envisaged the supply of 36 armored vehicles in the coming years. In fiscal 2016 Mitsubishi company carried out part of the required work, but until the end of the year did not transfer the finished equipment to the customer. Deliveries began in 2017, and this year almost all ordered cars were delivered - 33 units out of 36.

In the same 2017, the Ministry of Defense placed a new order for 33 pieces of equipment. In 2018, only 18 were limited to the order. The production period of 2018 began with the completion of the last part of the order from 2016, after which the equipment contracted in 2017 went into production. A total of 36 wheeled tanks were delivered the year before last, which made it possible to close all previous orders.

In 2019, serial production continued, but was conducted at a slower pace. According to The Military Balance 2020, it was possible to build at least 15 armored vehicles - half as much as in previous years. However, this almost completely closed the contract of 2018. Also last year, a new order for 29 pieces of equipment appeared. Its implementation is underway right now, and the Self-Defense Forces regularly receive ready-made MCVs.

Recently appeared in foreign media news about the possibility of another order. The current defense budget for fiscal 2020 provides for the purchase of another 33 Type 16 armored vehicles with a total value of 23,7 billion yen (approx. 2,2 billion US dollars). Possible delivery dates for finished equipment under such a contract are not specified. 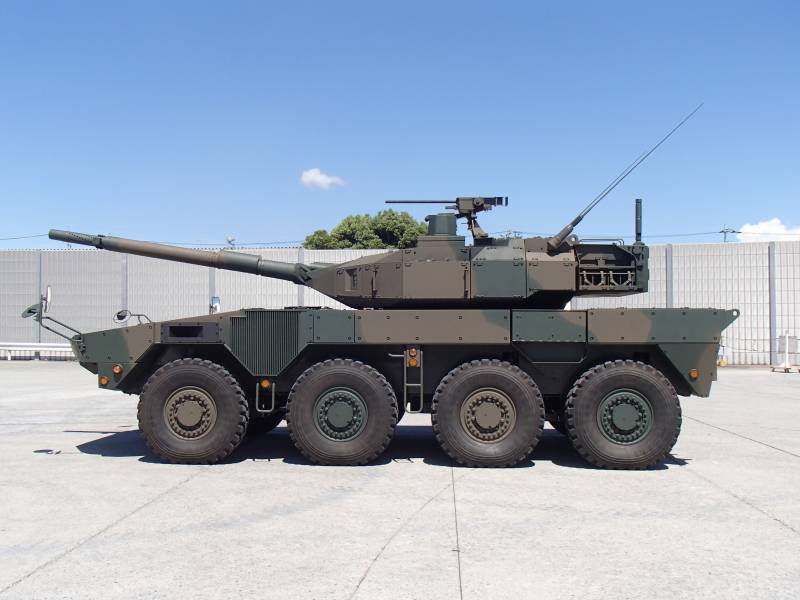 At the same time, it is clear that such an order will not take a lot of time. Mitsubishi Heavy Industries and subcontractors have already proven to be reliable performers. It can be assumed that when signing the necessary papers this year, the finished equipment will arrive in the troops no later than 2021-22.

Thus, to date, 116 wheeled tanks “Type 16” have been contracted. Another order for 33 units. will appear soon. The industry has manufactured and already transferred to the customer at least 85-90 armored vehicles. A certain amount of equipment is at different stages of construction and will be commissioned in the near future.

According to the announced plans, MCV production will continue until 2026. For this, new orders for equipment may appear in the coming years. The total number of combat vehicles should reach the level of 250-300 units, which will make it possible to carry out all the planned re-equipment measures.

The first serial “Type 16” MCV arrived in the part of the Ground Self-Defense Forces in 2017. Rather high production rates made it possible to form several units fully equipped with such equipment as soon as possible. To date, MCV, despite its still limited numbers, have become quite widespread and are used in all major strategic areas. 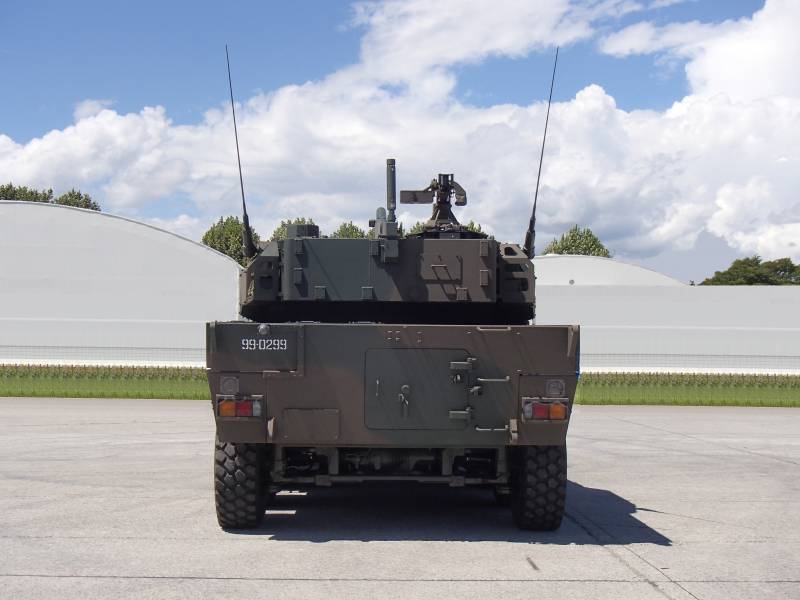 It is known about the deployment of new wheeled tanks in five parts almost throughout Japan. As part of the Northern Army, the 10th Rapid Reaction Regiment of the 11th Ground Forces Brigade received such equipment. In the Northeast Army, Type 16 already operates the 22nd Rapid Response Regiment of the 6th Division. In the Central Army - the 15th regiment of the 14th brigade. In the Western Army, two formations already received equipment - the 42nd regiment of the 8th division and the 4th reconnaissance battalion of the 4th division.

In the near future, it is expected to create new or reform the existing quick reaction regiments as part of different brigades and divisions. The armament of these parts will come newly released wheeled tanks. To date, the Self-Defense Forces have managed to get less than half of the planned amount of Type 16, which may indicate the future rearmament of a number of other units.

Tank instead of tank

The main goal of the current processes is to change the structure of the Ground Self-Defense Forces in accordance with modern requirements and to replace their obsolete equipment. Using promising wheeled tanks, the MCV proposes to replace both the old Type 74 MBTs and the newer Type 90 MBTs, which do not fully suit the command.

Currently, there are 200 old Type 74 tanks, 341 later Type 90 tanks, and 76 modern Type 10 tanks in Japanese tank units. The total number of the park is 617 units. Given the recently delivered wheeled armored vehicles - over 700 units. By 2025-26 command plans to reduce the number of main tanks in favor of modern wheeled armored vehicles. The intention was to reduce their number to 300 units. 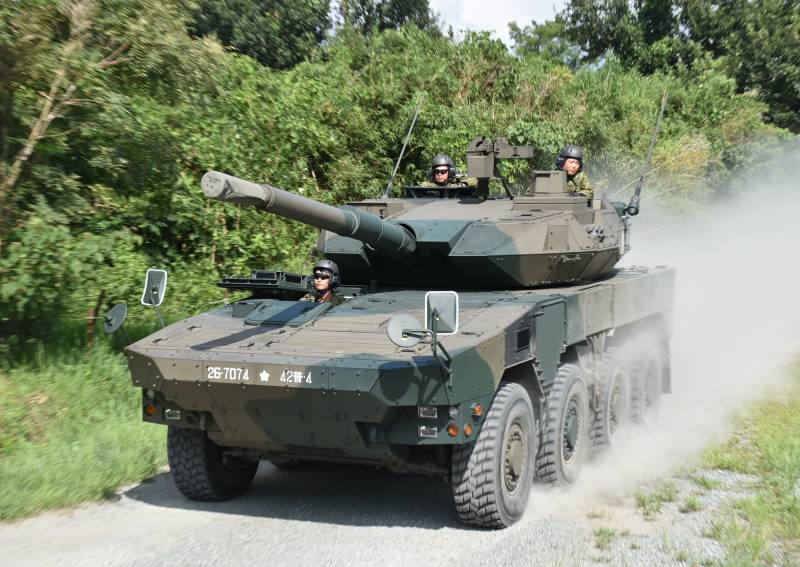 Serial machine "Type 16" in the army, 2017
According to various estimates, the planned modernization of the armored units provides for the complete abandonment of the obsolete MBT "Type 74". Also, a significant amount of “Type 90” will be withdrawn (or written off) to the reserve, although most of them will continue to serve.

Thus, since the middle of the current decade, the basis of armored units, including rapid response units will be the main tanks "Type 90" (approx. 200 units) and a similar number of wheeled "Type 16". Modern MBT "Type 10" can not yet claim numerical superiority. Nevertheless, they remain in the series, and in the future they can supplant older predecessors.

It is curious that replacing the obsolete MBT “Type 74” with a modern wheeled vehicle “Type 16” is unlikely to have negative consequences in the context of combat capabilities. Losing in defense, Type 16 has similar or better firepower. In addition, the wheeled tank is characterized by modern equipment for various purposes, simplifying the conduct of battle and increasing its effectiveness.

However, the main advantages of the “Type 16” are connected precisely with the mass and the wheeled chassis. This technique is able to quickly get to the specified area on its own on highways. The limited mass allows it to be transported by airplanes of various types, including The latest Kawasaki C-2 transporter. In terms of tactical and strategic mobility, the MCV is superior to the "traditional" tanks. " 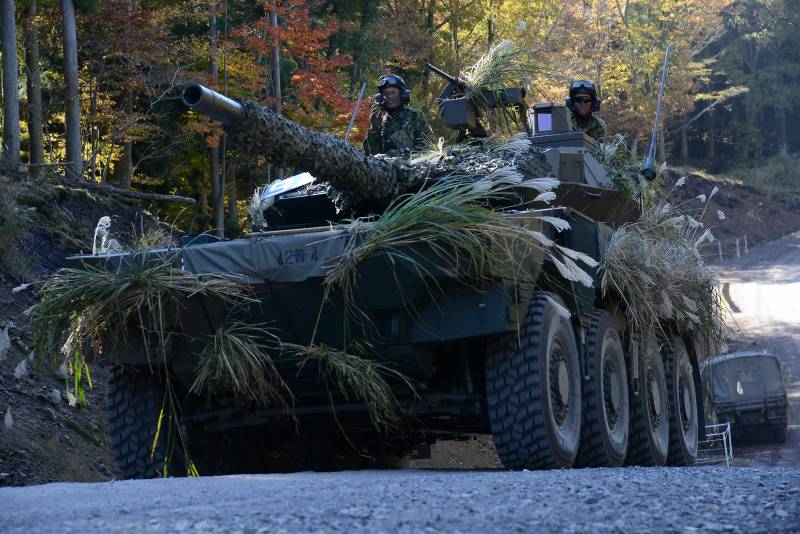 All ongoing work on the construction of new armored vehicles and the rearmament of units is directly related to the program for creating rapid response formations. Such regiments and battalions need armored combat vehicles with sufficient firepower and high mobility. Old MBTs do not correspond to a similar concept, which is why it is proposed to abandon them.

It is proposed that quick response regiments be kept on constant duty and, if necessary, transferred to the desired area. With their help, it is planned to quickly and efficiently organize or strengthen defense in the necessary areas in Japan, including on numerous small islands. In addition, they can find application in foreign peacekeeping operations.

Thus, the Self-Defense Forces developed a new concept for the development of ground forces and advanced equipment for its requirements, and then proceeded to the implementation of plans and have already obtained very real results. Current processes will end in the middle of the decade, and as a result, the Ground Self-Defense Forces will receive a modern and effective tool for solving existing problems in the characteristic conditions of an island nation.

We are in Yandex Zen
Armored cars HAMZA MCV (Pakistan)
Asian armored fighting vehicles
132 comments
Information
Dear reader, to leave comments on the publication, you must to register.