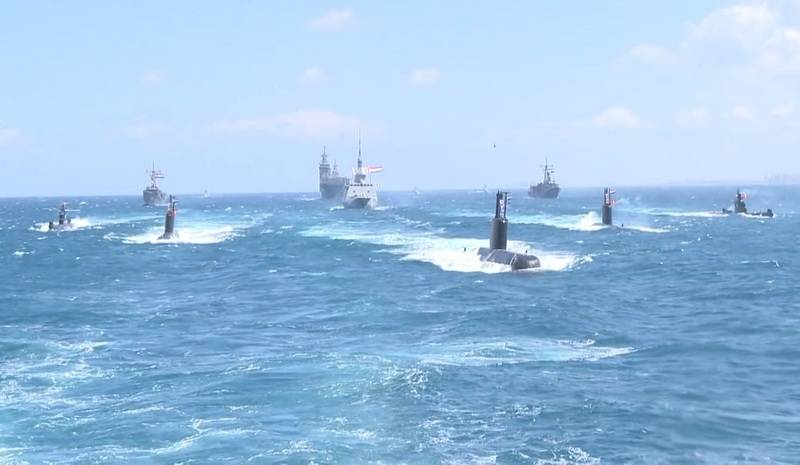 The third diesel-electric submarine of the German project 209 / 1400mod - S 43 from the Egyptian Navy arrived on May 5 in Alexandria, making the transition from German Kiel. It is reported by the Ministry of Defense of Egypt.


D43 submarine S867 under the tail number "209" of project 1400 / 9mod was transferred to the Egyptian Navy on April 14 this year at a shipyard in German Kiel, after which on April XNUMX it entered an independent transfer to Alexandria. The meeting of the submarine was marked by a naval parade in which almost all the main forces of the Egyptian took part fleet.

According to reports, the command of the Navy, on the approach to Alexandria, arranged a solemn meeting for the submarine, in which all the active submarines of the Egyptian Navy took part (two 209 / 1400Mod German-built projects and two Chinese-built 033 projects), both Mistral universal landing ships, FFG frigate 1001 Tahya Misr French-built type FREMM, frigates F 911 Taba and F 916 Alexandria (from the U.S. Navy type Oliver H. Perry) and all four small missile corvettes built by the US Ambassador Mk IV (type S. Ezzat). Six helicopters — three Boeing AH-64D Apache and three Ka-52s — were on the flight deck of each of the two Egyptian UDCs.

As previously reported, the entire Egyptian fleet ordered four submarines of project 209 / 1400Mod. In view of the S43 that arrived in Alexandria, three submarines are already in Egypt, the latter is under construction in German Kiel.

It is assumed that submarines will provide security and border protection in the Mediterranean and Red Sea, as well as the Suez Canal.

Ctrl Enter
Noticed a mistake Highlight text and press. Ctrl + Enter
We are
Egyptian Navy received the third diesel submarine project 209 / 1400ModIn Germany, launched a third submarine for the Egyptian Navy
18 comments
Information
Dear reader, to leave comments on the publication, you must to register.