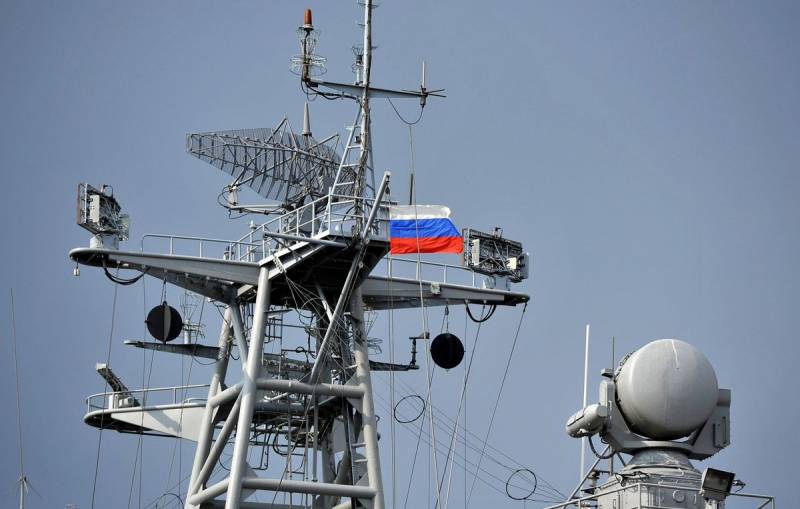 Every year on May 7, military personnel and specialists celebrate their professional holiday, whose activities are directly related to the radio equipment of the Russian Navy. May 7 in Russia is a double holiday that directly relates to both civilian and military specialists. Day of the communications officer and specialist of the radio technical service of the Russian Navy, approved on the basis of the order of the Commander-in-Chief of the Naval fleet The Russian Federation of July 15, 1996, coincides in our country with Radio Day, which is traditionally widely celebrated by workers in all communications sectors.

The advent of radio communications in the fleet

History Russian radio is inextricably linked with the name of the outstanding domestic inventor Alexander Stepanovich Popov, born in 1859. By 1899, he was already an Honorary Electrical Engineer, and since 1901, a State Counselor. This Russian scientist, physicist and electrical engineer did a lot for the development of radio communications in our country, including the introduction of advanced technologies at that time in the army and navy.

Back in 1897, an outstanding domestic inventor conducted a series of practical works, the main purpose of which was to demonstrate the possibility of radio communications (wireless telegraph) between the ships of the Russian fleet. In the period from 1898 to 1900, under the direct supervision of Alexander Popov, two portable radio stations were assembled by military signalmen, and practical experiments were conducted on their use in the armed forces. According to the results of the experiments, representatives of the Main Military Engineering Directorate of the Russian Empire ordered field two-ring radio stations abroad. At that time in Russia there was no necessary production base for their manufacture. 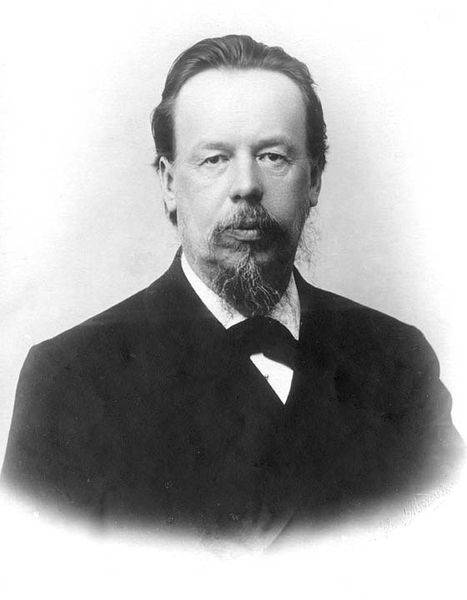 Alexander Stepanovich Popov
In May 1899, the first radio part in the history of the Russian fleet was formed in Russia, we are talking about the Kronstadt spark military telegraph, and beginning in 1900 the first radio stations began to appear on the warships of the Russian fleet. In the same year, the process of training radio specialists for the domestic fleet begins. Quickly enough, it became clear that in addition to the issue of mass equipping warships with radio stations, a second, even more important question appeared - the training of specialists and the training of fleet personnel in their combat use, operation and repair. The first in our country courses for military sailors on wireless telegraphy were organized at the direction of the Main Naval Headquarters in Kronstadt. Two-week courses were launched on the basis of the already open Mine Officer Class. At the same time, the program for these courses, including lecture material and practical exercises, was personally prepared by the scientist and inventor Alexander Stepanovich Popov.

Vice Admiral Stepan Osipovich Makarov, the chief commander of the Kronstadt port, greatly assisted Popov in the issue of the release of the first radio equipment, as well as equipping ships with radio communications. The name of this illustrious Russian admiral is also associated with the improvement of the use of radio communications in the Navy. It is with the name of Admiral Makarov that the specialists of the RTS fleet associate the birth of domestic radio reconnaissance, direction finding and radio interception. The limited use of radio communications for command and control was first used in practice by our officers during the Russo-Japanese War of 1904-1905. The war in the Far East has shown the effectiveness and prospects of new technical means: telegraph, telephone and radio communications. Moreover, the experience was bitter, since one of the reasons for the unsuccessful actions of the Russian fleet was the lack of a full-fledged organization of combat control.

It is no coincidence that conclusions from the unsuccessful campaign were made immediately after the end of the war. By the end of 1907, when the First Russian Revolution died down throughout the country, the Regulation on the radiotelegraphic unit in the Maritime Department was introduced. Two years later, a full-fledged Communication Service was created in the country, which was supposed to effectively ensure the management of the fleet. Continuous development in this direction was carried out until the outbreak of the First World War, which confirmed the correctness of the chosen course of development, once again proving to the whole world the importance of modern technologies in military affairs. 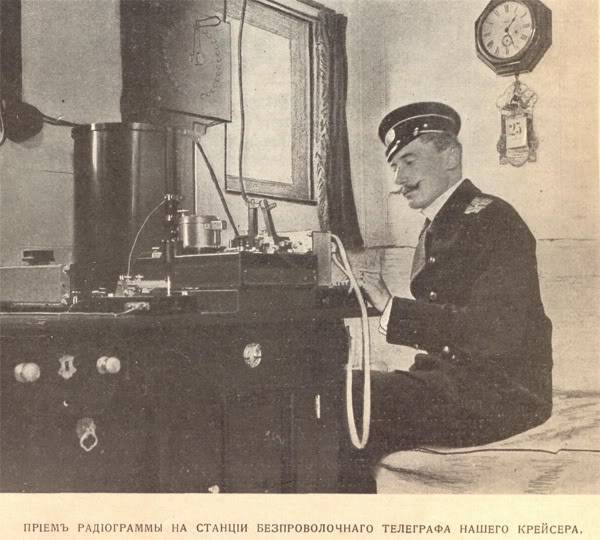 Radio operator in the radio room of the ship of the Russian Imperial Navy, 1904-1905

The importance of communications and radio services for the fleet

The role of communications in the Russian armed forces, especially in the navy, can hardly be overestimated. At sea, ships must communicate with each other and with coastal services over many thousands of miles. The success of the solution of combat missions directly depends on how smoothly, accurately and efficiently the process of exchanging the necessary information and data will be established. This rule is invariably confirmed by all wars in which the Russian fleet participated. The experience of the Second World War once again confirmed the thesis that the combat power of formations or individual ships largely depends on command and communication issues. In many cases, loss of communication led to loss of control, and loss of control was a harbinger of future defeat.

Given these circumstances, improving the organization of communications in the Navy and combat methods of its use, the creation of new radio equipment was carried out both during the Great Patriotic War and after its completion. This is an ongoing process important to the Russian armed forces. At the same time, such an important issue for the Russian fleet was resolved as communication with submarines, which today are the main striking power of the strategic forces of the Russian fleet. Moreover, communication must be continuously maintained not only with surface and submarine ships of the fleet, but also with the sea aviationas well as coastal troops. At the same time, control must be ensured not only by strategic nuclear forces (the same strategic nuclear submarines), but also by general forces. Against this background, the development and improvement of communication systems at all levels remains one of the most important tasks of the radio engineering service of the fleet.

Moreover, the importance of the tasks facing the radio engineering service of the Russian fleet is only growing. In the XNUMXst century, the importance of protecting one’s own communication channels and military radio systems used by the military has increased many times over. At the same time, the radio engineering services of the fleet must simultaneously work to ensure the security of their own systems and communication channels and disrupt the operation of such systems on ships and coastal bases of a potential enemy. To solve these problems, the development and procurement of modern equipment is not enough, constant training and gathering of radio engineering units, as well as training of personnel with the necessary knowledge and skills are necessary. 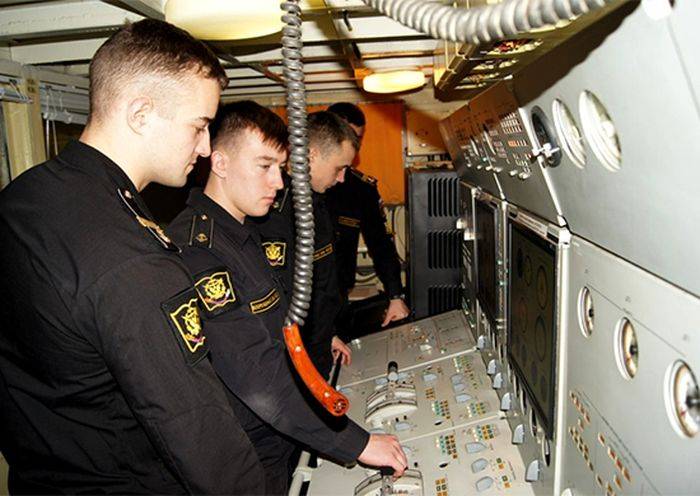 In our country, highly qualified personnel for the radio service of the Russian Navy is being prepared by the Higher Naval School of Radio Electronics, named after the outstanding domestic engineer and scientist Alexander Stepanovich Popov. This higher military educational institution was the first independent Russian military university to train specialists in the field of communications and radio engineering for the Russian Navy.

Today, the Radio Technical Service of the Russian Navy is organizationally part of the High Command of the Navy. The importance of this service is revealed through the tasks being solved. Its main purpose is to organize and equip the ships and fleets of the fleet, as well as coastal facilities and facilities of the Russian Navy, with the necessary electronic weapons. The Fleet's RTS is also responsible for the organization and management of the situation lighting system, the technical operation of all naval electronic weapons, as well as the organization and management of the engineering and radio-electronic support of the fleet.

On this day, Military Review congratulates all current and former signalmen and specialists of the radio technical service of the Russian Navy, as well as veterans on their professional holiday. We congratulate all employees of all communication sectors of Russia on Radio Day.