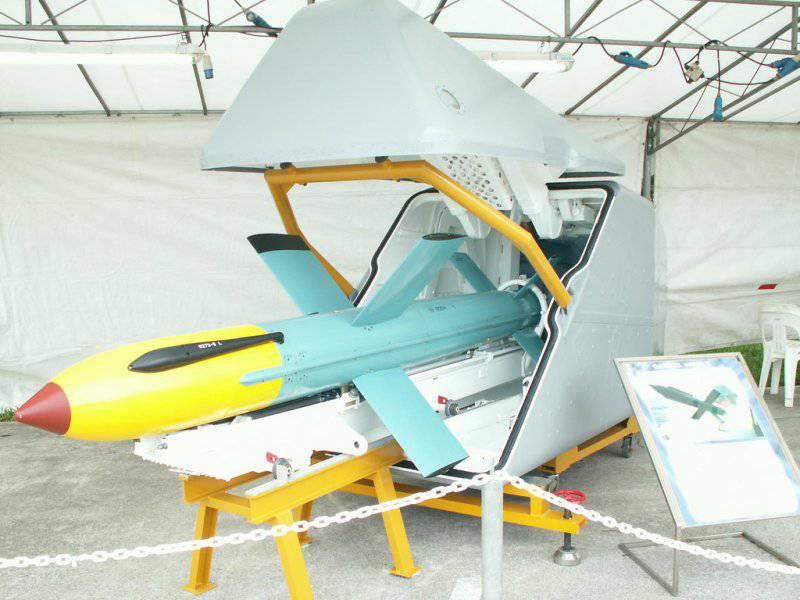 Israel began to develop anti-ship missiles just 6 after the proclamation of the independence of the state. In the 1954 year, Raphael (at that time he was called the 3 Institute) started developing an anti-ship missile called the G-25 designed to replace coastal barreled artillery. Subsequently, the rocket was adapted for launching from the Dakota transport aircraft, and the operator controlling the rocket with the help of a joystick was placed shoulder to shoulder with the pilot. The range of the rocket was limited to the operator’s direct line of sight and was no more than 20 kilometers. It is noteworthy that this rocket was also offered to the ground forces, but the command did not express interest, citing the fact that the minimum range in 6 km was too long for the ground forces, as the maximum range "exceeds the requirements of the ground forces." 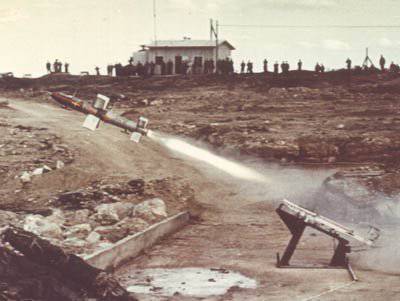 The Navy gladly accepted this missile, giving it the name "Luz". Another noteworthy point: this rocket was first tested on 18 on May 1959 on board the destroyer Eilat, which later became a victim of Soviet-made anti-ship missiles. During the tests revealed the main drawback of the rocket. The relatively dense smoke of the cruise missile engine and the gases of the steering devices significantly hampered the optical guidance of the missile operator to the target. This mainly influenced the accuracy of pointing in altitude, so sometimes the rocket did not reach the target or passed over it. In the Navy, a group was specially created to create electric steering devices. 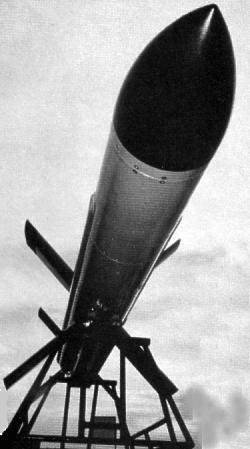 In August 1962, Egypt tested a ground-to-ground rocket created by German scientists who have received shelter in the country of the pyramids. The fact of the test was seriously alarmed by the Israeli leadership, instructing Rafael to urgently engage in the development of ground-to-ground missiles. Rafael threw all his forces into this project, postponing the further development of the Luz PKR. As a result, the development of RCC "Luz" passed to the concern Aviation Israel Industry (Israel Aircraft Industry, IAI). IAI was supposed to set up production of the Luz rocket launcher, but as a result received a crude missile. In order to complete the development of the rocket in the IAI, a group of engineers was created which was headed by engineer Uri Even Tov (אורי אבן טוב) who had transferred from Rafael for these purposes. He changed the concept of the rocket by dividing the guidance system into two components; one was a radio altimeter, and the other was a semi-active radar homing head. The first allowed the rocket to approach the target at a minimum height, the second provided maximum secrecy of use (GOS did not radiate anything), which fully justified itself in the battles with Egypt and Syria. On the other hand, such a guidance system limits the firing range and does not allow for horizontal shooting.

Since IAI was a closer company to the Ministry of Defense, despite the delay in the project, there were no problems with its financing. The development was successfully completed in the 1969 year, when at the Haifa anti-missile boat carried out from the side of the missile boat, Gabriel successfully hit a target that simulates an enemy missile boat. Immediately after these tests, the Israeli Navy adopted the Gabriel PKR.

By the Doomsday War, the Gabriel PKR was in service with most BMS Israel missile boats. During the war, about 50 missiles were fired, half of which hit their targets (more here).

Thus, the range of the RCC Gabriel Mk1 was about 20 km (according to some sources 25 km). It was equipped with a semi-active homing head (GOS), significantly limiting the combat capabilities of the boat, since its radar boats had to be in active mode and highlight the target until the moment of its defeat. On the other hand, it spurred the Israelis to create and actively use progressive EW tools and develop tactics for the use of RPC. So, they were launched only after all the missiles launched by the enemy were disoriented and were removed from the combat course by passive jamming.

By the 1972 year, the Gabriel Mk2 RCC was developed with an increased range of 36 km, which was achieved by increasing the size and quality of the cruising solid-fuel engine. The missile guidance system has not changed, and also limited the combat capabilities of the boats. The rocket was put into service in the 1976 year. In Taiwan, the RCC Gabriel Mc2 was produced under the name Hsiung Feng 1, and in South Africa under the name Skerpioen (scorpion).

In 1978, the model presented the RCC model Gabriel Mk3 A / S. It has undergone significant changes and could also be used from the F-4 "Fantom", A-4 "Sky Hawk", С2 "Kfir", "Sea Scan". It has a range of 60 (according to other 80 sources) km, and the active radar seeker allows you to use it in the "shot-and-forget" mode.

The rocket has a normal aerodynamic configuration. The case consists of three main compartments. The first contains a guidance system, including an inertial navigation system and a homing head, in the second there is a power source, in the third there is a semi-invasive combat unit designed to hit targets of various classes and equipped with a time delay fuse. The 4 cruciform wing and the 5 propulsion system are located in the middle part of the fuselage, the 7 cruciform steering wheels and the 8 actuators are located in the stern section. The rocket has a small effective scattering surface (EPR).

Active X-band radar noise-resistant GOS with fast frequency tuning is capable of operating in the mode of active interference on the ship station, thus significantly reducing the effectiveness of the missile defense system of the attacked ship.

Targeting can be done in two modes: autonomous and with correction of the inertial navigation system on the march segment of the trajectory. The first is used when launching missiles from attack aircraft (fighter-bombers), and the second from basic patrol aircraft equipped with on-board radar capable of simultaneously accompanying several targets (aircraft "Sea Scan").

When firing in the first mode, the bearing and the distance to the 5 target, determined using on-board radar or received from other aircraft, are entered into the onboard computer missiles simultaneously with the current information about the speed and spatial position of the carrier at the moment of launch. After launch, the rocket is lowered in the 2 segment to the height of 20 m, after which it performs a horizontal flight under the control of a radio altimeter. To ensure gentle descent, the pitch angle is controlled according to a program previously entered into the memory of the calculator. 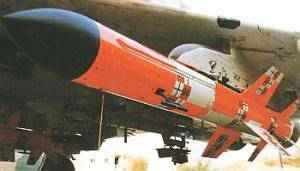 Guidance missiles in the horizontal plane on the march plot 3 provided inertial navigation system and onboard computers. After entering the 4 search zone, the active homing unit is turned on at the pre-programmed point, and the 7 target is detected and captured. In the 8 homing area, the flight altitude, depending on the sea state, is 1.5, 2.5 or 4.0 meters. The current bearing and distance to the target are continuously introduced into the inertial system from the GOS, the flight path is corrected by shifting the control surfaces.

The main control mode of the Gabriel MCR A / S RCC is offline mode. Targeting in this case is carried out in three ways.
The first method is automatic data entry from the aircraft radar. When an aircraft carrier enters the range of the missile, the target designation data entry is stopped and the flashing indicator informs the pilot about the possibility of launching the missile.

The second method involves receiving data from external intelligence tools, such as another aircraft or unmanned aerial vehicle.
The third method is the simplest, the calculated values ​​of the bearing and distance to the target are entered into the onboard computer of the rocket manually through the fire control panel. In addition, for the timely activation of the GOS, the pilot sets one of the calculated ranges of the missile's flight range: short-range (up to 20 km), medium (20 — 40 km) and long-range (over 40 km).

To reduce the search zone (i.e., increase the time spent by the GOS in the secretive mode), when targeting Gabriel MK 3 rockets, an inertial system can be corrected on the cruise trajectory. In this case, the aircraft continues to accompany the target after the launch of the rocket and corrects the trajectory of its flight along the radio command line. Correction of the 6 error of the inertial system reduces the possibility of evasion of the target, moreover, it is possible, with massive opposition, to include an active homing vessel in the immediate vicinity of the attacked ship.

The Gabriel MKZ shipborne missile can also be used in the radio command mode with a radar target illumination, like in the early versions of the missile.

The Gabriel Mk3 missile has been in service with the Israeli Navy since 1982 (some sources claim it was not adopted).

History with the Gabriel Mk4 RCC is secret, but according to some reports it is equipped with a turbojet engine and has a range of 200 km. The number of missiles produced and commissioned is also not reported.

A further development of the Gabriel PKP is the Gabriel Mk5 PKR, currently being developed by the IAI concern. This extreme anti-ship missile of the Gabriel line is intended to become the main anti-ship armament of the Israeli Navy ships. In size, it will correspond to an Exocet and Harpoon type ASM. It is assumed that Gabriel Mk5 will have higher rates than most modern anti-ship missiles, especially when used in coastal waters and in overcoming advanced means of anti-missile (soft-kill and hard-kill) adversary.

Probably, the new version will be based on an earlier version, replacing Gabriel Mk2 in the Navy. The existence of such a rocket (we are talking about Gabriel Mk4) has never been officially confirmed, however, the fact that, unlike most other users, Israel has not updated its Harpoon RCC (RGM-84D) before the Block II configuration (RGM- 84L).

Hints of Gabriel Mk4's existence appeared in the early 2000s, when the IAI took part in an international tender to equip new Singapore Naval frigates. fleet. As a result, Singapore opted for Harpoon missiles.

Gabriel Mk5 will use an advanced, active GOS, supported by a modern control system designed to optimize the overall combat effectiveness of the anti-ship missiles. The rocket will have a significantly increased ability to distinguish and select targets, especially in coastal waters, as a rule, overloaded with sea transport, as well as in the context of creating extensive and complex signals of false targets. Like most advanced anti-ship missiles, Gabriel Mk5 will be able to overcome the enemy's missile defense system, whether it is a means of functional decommissioning, or means of fire destruction. It is being developed taking into account modern actions to disrupt the operation of the enemy EW facilities, the use of advanced baits and active jamming.

Gabriel Mk5 is expected to become an integral part of the new complex of offensive and defensive systems currently being developed by the IAI concern. This new weapon system will also include the Barak-8 long-range air defense missile system, a multi-mode integrated combat control system and the Elta (IAI) EL / M-2248 MF-STAR multi-purpose shipborne radar, which the Elta claims is superior in performance to the SPY-1 AEGIS radar .

According to IAI, RCC Gabriel Mk5 will be able to overcome the limitations of existing missiles:
overcome the problems of selectivity (distinction and choice of targets) in loaded coastal waters;
copes with a rapidly changing tactical environment;
cope with a number of coastal targets;
overcomes near dipole reflectors, false targets and active interference;
overcomes the means of fire destruction of the enemy (hard-kill defense).

Gabriel RCCs were exported to a dozen third world countries. The experience of combat use is indicated above.