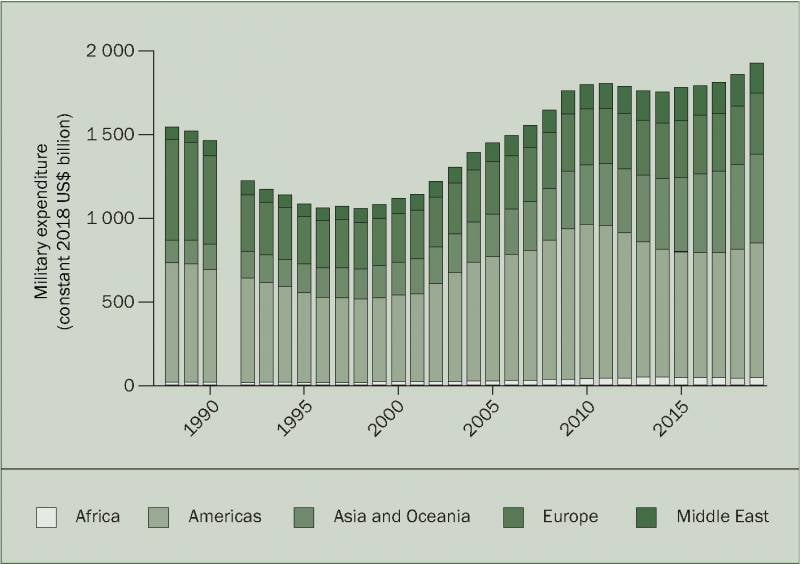 Total spending of the world and regions over the past decades

At the end of April, the Stockholm Peace Research Institute (SIPRI) published its next annual report on its spending on defense last year. This document reads out a number of interesting figures, and also shows the key trends that are now observed in the military and political sphere.

Reportedly, world military spending last year amounted to $ 1917 billion. This is 2,2% of world GDP - at $ 249 per capita. Compared to 2018, expenses increased by 3,6%. Compared to 2010, the growth was 7,2%. SIPRI notes that now the highest absolute and relative indicators have been observed since the crisis of 2008. Probably, these are also peak values, and further decline will begin.

Only five countries account for 62% of spending — the United States, China, India, Russia, and Saudi Arabia. The "Top 40" states accounted for 92% of global spending. The absolute record for spending again remains with the United States with its military budget of $ 732 billion (an increase of 5,3%). Other growth leaders show similar growth rates.

Steady growth of budgets is observed only in the developed countries of Europe, North America and Asia. In other regions, existing indicators are maintained or even reduced. So, South America continues to finance defense in the same volume, the average indicators of Africa are growing slightly, and in the Middle East there is a decrease.

The main contribution to the overall growth of world spending is made by only a few large countries, and their list has not undergone special changes for several years. The reason for the constant buildup of military budgets in their case is the need to confront other countries with comparable or higher military capabilities. 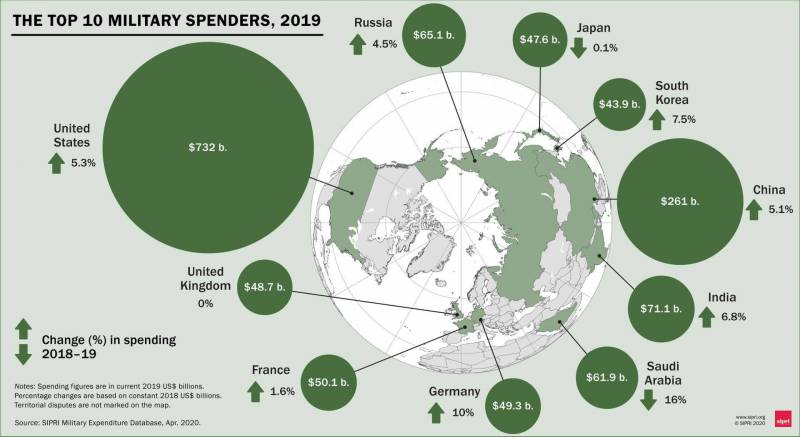 World leaders in spending
This trend is best demonstrated by the United States with its 732 billion spending. They have developed armed forces, the contents of which are quite expensive. In addition, Washington is openly opposing China and Russia, which requires additional costs.

China and Russia respond symmetrically - with the growth of their spending. The Chinese military budget for the year grew by 5,1% and reached $ 261 billion. Russia in 2019 spent $ 65,1 billion on defense - an increase of 4,5%. SIPRI notes that Russia is one of the European leaders in the share of military spending in the budget. They account for 3,9% of the country's GDP.

It should be noted that China is not only opposed to the United States, and this is also reflected in the statistics from SIPRI. The main regional competitor of China is India, which also has to compete with Pakistan. Confrontation with two neighboring countries last year led to a budget increase of up to $ 71,7 billion - by 6,8% and raised the country to third place in the overall ranking. It is noteworthy that India surpassed China in terms of growth rates, but at times inferior to it in absolute numbers.

In connection with the activity of China and the DPRK, South Korea is increasing its expenses. With expenditures of $ 43,9 billion and an increase of 7,5%, it occupies the tenth line in the general list of countries. Above it is Japan. She spent $ 47,6 billion on defense, but this is 0,1% less than in 2018.

Interesting trends are observed in Europe. In the region, a confrontation continues between Russia and NATO with its allies, which leads to well-known consequences. Some of the main NATO countries maintain the previous level of spending. Thus, the United Kingdom again spent $ 48,7 billion (an increase of 0%, 7th place in expenditures), while France increased the budget by only 1,6% to 50,1 billion and remained in sixth place on the general list. 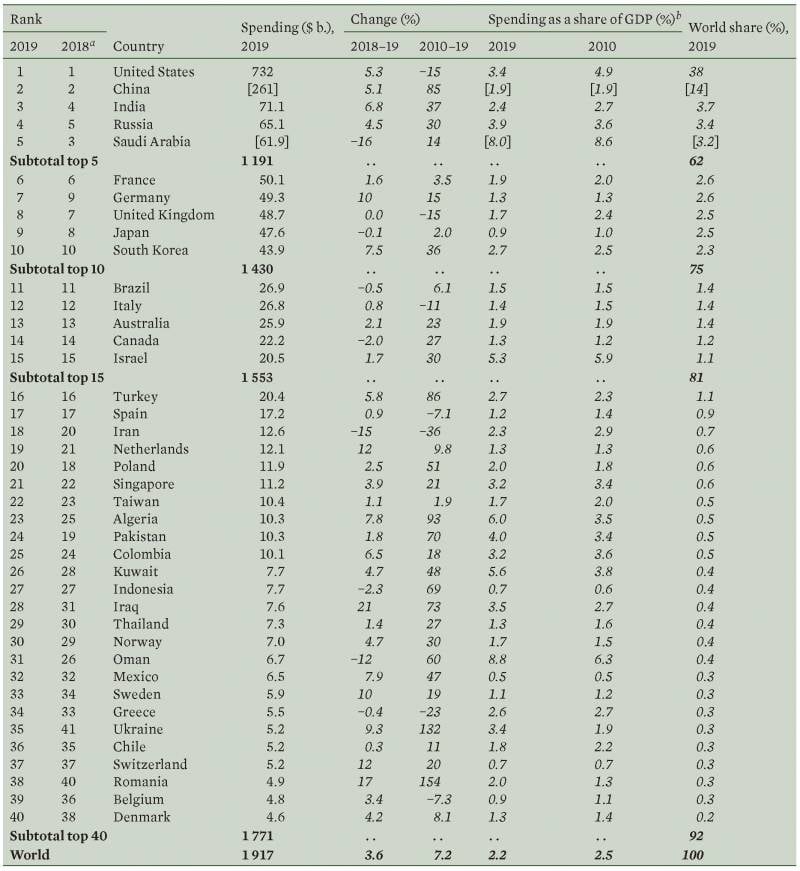 Top 40 - 92% of global spending
Between Great Britain and France, Germany is in the "Top 10" with 49,3 billion expenses and a substantial increase of 10%. Ukraine showed close growth of 9,3%, but it spent only $ 5,2 billion. Similar trends are observed in some other countries. For example, the Netherlands, Switzerland and Romania increased spending by 12, 12 and 17 percent. respectively - but in absolute numbers they spent only 12,1 billion, 5,2 billion and 4,9 billion dollars.

A number of countries around the world are now forced to fight terrorism as part of full-fledged military operations. In other states, at least political instability is observed, threatening to go into a civil war. Such circumstances can stimulate the growth of defense spending - which is observed in some regions.

In 2019, the military spending of Iraq, which continues to fight international terrorists, increased by 17% and reached $ 7,6 billion. SIPRI does not have data on Syria, which is in a similar situation. Burkina Faso's budget showed high growth of 22%, but even after that, expenditures amounted to only $ 358 million. A similar situation with Afghanistan is 20% growth and only 227 million in absolute numbers.

In other countries, reverse processes are observed. A weakened economy can no longer maintain defense spending at the same level. Niger cut its budget by 20% to $ 172 million. Nigeria - by 8,2% to $ 1,86 billion. Chad began to spend 5,1% less.

SIPRI data draws attention to the performance of individual countries showing record growth or decline. These processes can be based on a variety of factors, mostly obvious and expected.

Growth and fall leaders
Bulgaria recorded a record increase in military spending of 127% last year, having spent $ 2,127 billion. Two-thirds of these expenditures, approx. $ 1,25 billion went to pay for a single contract - eight F-16 fighters were ordered from the United States, as well as spare parts, weapons and personnel training. Until 2018, inclusively, the Bulgarian military budget was much more modest. It is very likely that according to the results of 2020, expenses will return to the previous level.

Among the "champions" can be mentioned Zimbabwe. This state has not been able to cope with the economic crisis for many years, and its costs are constantly falling. Last year, it became the leader in reduction, cutting the military budget by 50%. After that, a total of $ 547 million was spent on defense. Most likely, this trend will continue in the foreseeable future.

It is easy to notice that in terms of the main phenomena and trends of 2019, it does not differ much from the previous several years. According to SIPRI, from 2011 to 2014 there was a reduction in total military spending. Since 2015, the reverse process has been recorded - military spending both in individual countries and in total on the planet is constantly growing. So far, these trends continue, while the specific numbers, percentages, and positions of states in the composite ratings are changing.

2019 can be considered as confirmation of the long-known laws of the military-political sphere. The deterioration of relations between countries leads to military risks and confrontation, which entails an increase in defense spending. A belligerent country has to force these processes and sharply increase costs. At the same time, a weak economy can simply explode - after which, despite the continuation of the fighting, indicators begin to fall.

Actual statistics may be interesting from the point of view of the market for military products. The increase in spending indicates the willingness and ability of countries to develop their defense. One of the methods of this is the purchase of certain products. If developed countries - leaders of ratings from SIPRI - independently provide themselves with the necessary products, then other states are forced to purchase imported products. This fact should be taken into account by the manufacturers of weapons and other military products, including Russia, which is one of the leaders in the global market.

It should be noted that right now the world economy is not going through the best of times, and now it is affecting all major areas, including defense and security. The economic crisis associated with the pandemic can significantly change the defense budgets of countries. SIPRI will follow up on similar events and will introduce a new report next spring.

We are in Yandex Zen
World MIC - who is in the top
Projection of force
12 comments
Information
Dear reader, to leave comments on the publication, you must to register.