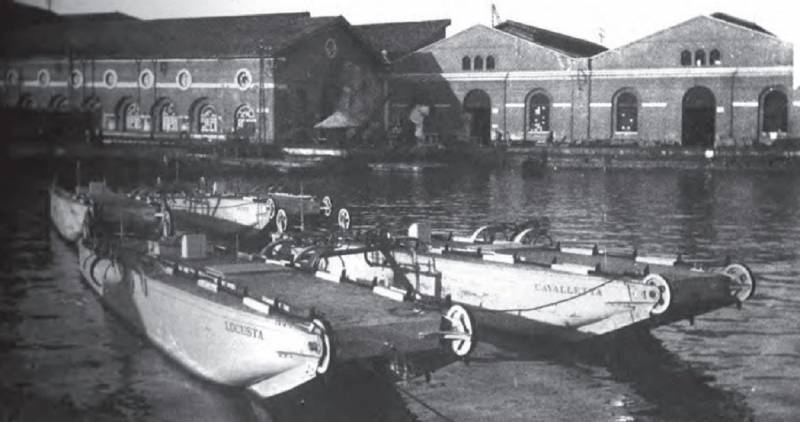 All built boats like Tank Marino. The photo was taken no later than mid-April 1918, before the first operation and the first losses. Photo Dieselfutures.tumblr.com

During the First World War, the so-called positional deadlock, which required the creation of a special technique. Similar processes were observed in some naval theaters of operations. To solve special problems in typical conditions in Italy, created “marine Tanks"- torpedo boats of the Grillo type.

The Kingdom of Italy entered the war in May 1915, and the Austro-Hungarian Empire became its main opponent. The fighting took place both on land and in the Adriatic. Over time, the Royal Italian Navy was able to form a powerful group of torpedo boats, which actually locked the Austro-Hungarian fleet at its bases. However, a complete victory was far away.

The Austro-Hungarian Navy took into account the existing risks and took measures. At the bases of Pula and Split, all available defenses were deployed, from booms to coastal artillery. Ships or boats of Italy could not safely approach the distance of a gun firing or launching a torpedo.

General view of the boat. Figure Naval-encyclopedia.com
The port of Pula, where the main forces of the enemy fleet. A successful strike on this object could dramatically change the situation in the region - or even withdraw the Austro-Hungarian fleet from the war. However, an attack by existing means was not possible.

Torpedo boats were seen as the most effective means against the enemy’s surface forces, but they couldn’t get into the Pula waters because of several lines of boom barriers. However, this problem was resolved in 1917. Engineer Attilio Bizio from SVAN suggested creating a torpedo boat of a special design, adapted to overcome floating barriers.

The essence of the new concept was to equip a light flat-bottomed boat with a pair of caterpillar chains, with which he could climb over the booms. Such opportunities are reflected in the name of the concept - “barchino saltatore” (“jumping boat”). Later, the finished equipment was officially called Tank Marino ("marine tank"). By the name of the lead boat, the entire series is often referred to as Grillo ("Cricket"). 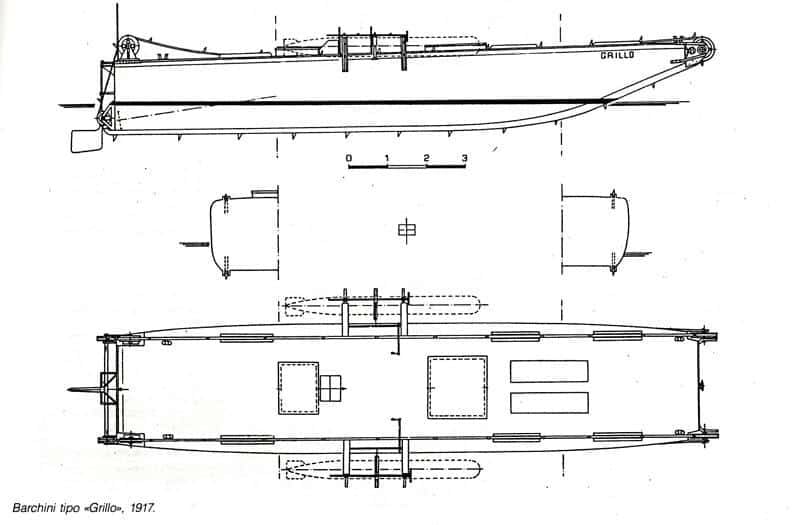 Projections of the boat. Figure Naval-encyclopedia.com
At the turn of 1917-18. plans were formed. SVAN had to conduct some tests, complete the “marine tank” project, and then build a series of four boats. In the coming months, the finished equipment was to take part for the first time in a real attack on the Pula base.

Development work began with the search for optimal solutions. We tested several variants of the "caterpillar mover", and also determined the most advantageous contours of the hull. The most successful options have found application in the finished project.

The Grillo project included the construction of a medium-sized, all-wood flat-bottomed boat. The length of the vessel is 16 m with a width of 3,1 m. Draft is only 700 mm. Displacement - 8 tons. The crew throughout the state included four people. 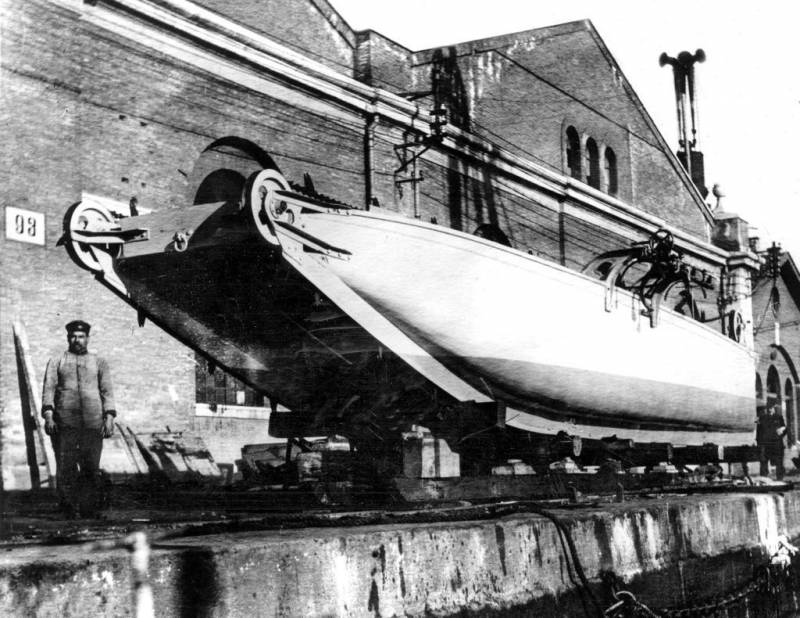 Grillo head boat before launching. Photo Pinterest.com
In the central and aft parts of the hull were placed two electric motors of the brand Rognini and Balbo with a capacity of 10 hp. One of them was connected to the propeller and accelerated the boat to 4 knots, the other was responsible for overcoming obstacles. A significant part of the internal volume of the hull was given for rechargeable batteries, capable of providing a range of up to 30 nautical miles.

Near the sides of the hull, on the deck and on the bottom, two narrow longitudinal guides in the form of metal profiles were provided. Guide wheels were installed in the bow and guide and drive wheels in the stern. It was proposed to install two narrow roller track chains on these devices. Some parts of the chain were equipped with bent hooks to interact with an obstacle. The chain was driven from its own electric motor through one of the rear wheels.

Armament Grillo consisted of two standard 450-mm torpedoes, which were armed with the Italian fleet. Torpedoes were carried on tow-type airborne vehicles. The boat was supposed to go on a combat course, open the locks of vehicles and reset weapon in water. 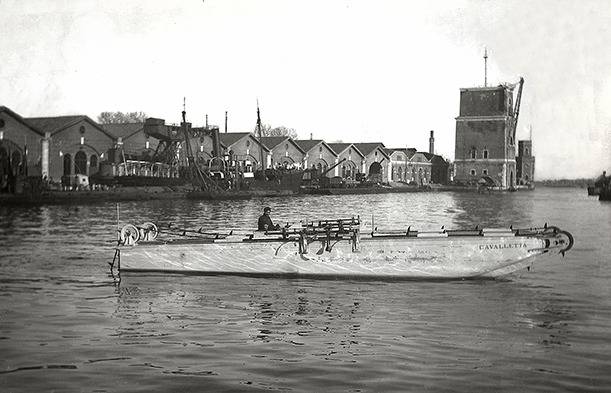 Grasshopper on the water. Photo Dieselfutures.tumblr.com
The special design of torpedo boats provided for specific working methods. Due to the limited battery capacity and short range, it was proposed to deliver them to the area of ​​the enemy port by tug. Then, with a maximum speed of 4 knots, the boat had to approach the booms and turn on the “tracks”. With their help, obstacles were overcome, after which the crew could continue swimming. After launching the torpedoes, the Cricket could return to the tow in the same way.

Tank Marino boats had a simple construction, so their construction did not take much time. In March 1918, SVAN delivered the KVMS a series of four boats that were fully operational. Almost immediately, preparations began for the first operations.

Light "jumping" boats reminded the sailors of some insects. Therefore, they were assigned the names Grille, Cavalletta ("Grasshopper"), Locusta ("Locust") and Pulce ("Flea").

The first combat operation involving new torpedo boats took place on the night of April 13-14, 1918. The Cavalletta and Pulce boats with the help of towing destroyers reached the minimum distance to the Austro-Hungarian base of Pula. The crews made an attempt to cross the booms and attack ships in the harbor. However, it was not possible to find a passage and enter the water area, and the crews decided to return. 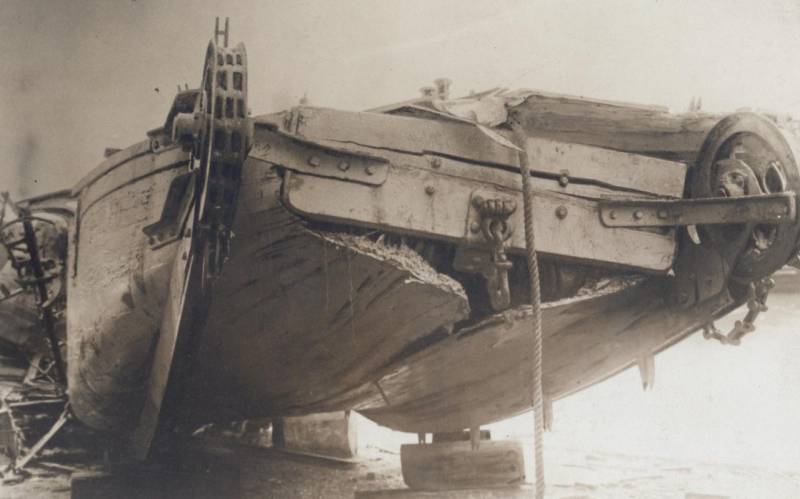 Cricket after its first and last mission. Photo Dieselfutures.tumblr.com
The return trip took some time, and the meeting with the escort ships took place at dawn. The command of the operation considered that the destroyers with boats in tow would not have time to leave at a safe distance in time - the enemy could notice and attack them. A difficult decision was made. For their own salvation and secrecy, unique boats were flooded in place.

Exactly one month later, on the night of May 14, the Grillo boat set off for Pula. His crew, led by Captain Mario Pellegrini, managed to find a suitable place and begin the transition through the booms. On the first line of four obstacles, the "secretive" boat made a lot of noise and attracted the attention of the enemy. However, the commander decided to continue the operation until the boat was noticed.

Behind the second obstacle of the Italians, an Austro-Hungarian watchman was waiting. He tried to ram the boat, but he managed to dodge the blow. The watchman opened fire and pretty quickly hit his target. Captain Pellegrini ordered a torpedo reply. In the confusion, the crew did not carry out all the necessary operations, and the torpedoes, having gone to the guard, did not explode. The Italian boat sank, and his crew was captured. After the war, the sailors returned home, where military awards awaited them. 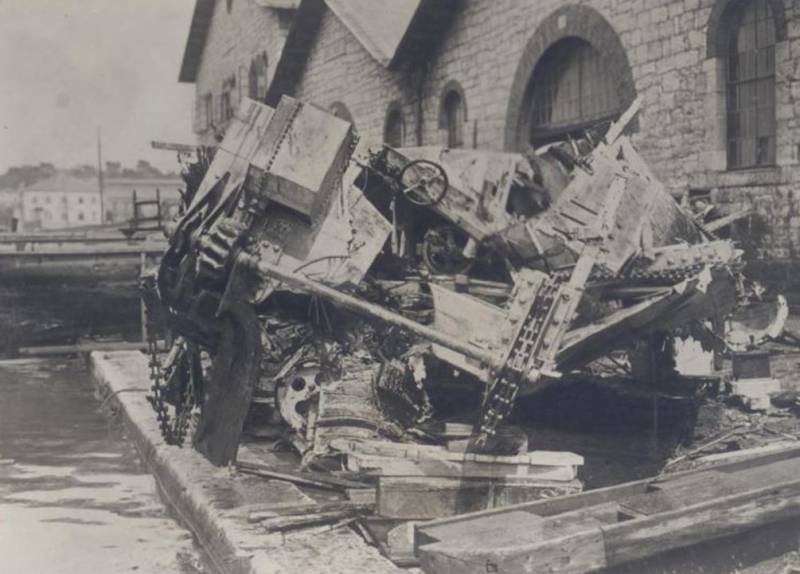 The artillery turned the stern of the boat - and made it possible to consider the drive chains. Photo Dieselfutures.tumblr.com
The last episode of the combat use of Tank Marino took place the next night, May 15th. This time, the Lokusta boat set off on its first trip. Already on the campaign to the barriers he was noticed, spotlights illuminated and fired. There was no talk of any covert attack. The operation command recalled the boat, and he safely returned home.

As part of the study of the original concept, the Italian Marines Naval Forces ordered and received four torpedo boats capable of overcoming obstacles. All of them managed to participate in real operations and show completely non-positive results. Three boats were lost in their first exits. The fourth managed to be saved - because the enemy noticed him too early, when he could still leave.

The boat Locusta was kept in the combat structure of the fleet, but was no longer used for its intended purpose. Three operations of April-May 1918 showed the presence of a mass of problems and the inability of the cash "jumping boats" to solve combat missions. In addition, due to the use of an electric power plant and low characteristics, the boat was unsuitable for other operations. 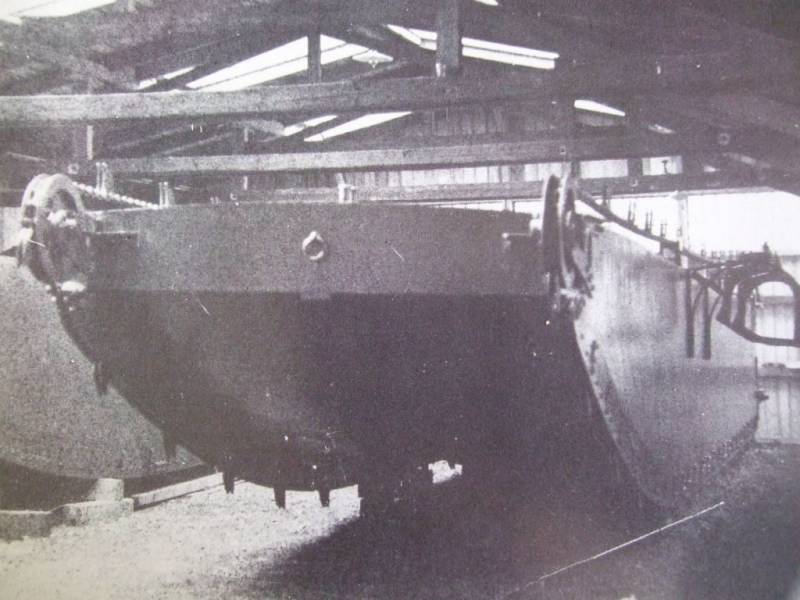 Austro-Hungarian boat, copied from Italian. Unlike its predecessors, it was not even tested. Photo Naval-encyclopedia.com
New boats of this type, of course, were not built. Unusual "tracked" vehicles command preferred traditional high-speed torpedo boats. Soon, this technique once again confirmed its high potential. The Locust remained in the KVMS until 1920, after which it was decommissioned as unnecessary.

It should be noted that in Austria-Hungary did not know all the features of the operation of "sea tanks", and therefore became interested in the original concept. The sunken boat Grille was raised to the surface, studied and even tried to copy. However, the Austro-Hungarian copy of the Italian boat did not manage to go to sea until the end of the war. And soon this project was simply forgotten due to the presence of more important matters.

Thus, the project of the "marine tank" quickly showed its failure, and it was abandoned. All advanced maritime powers continued to use torpedo boats of a traditional look. And the problem of barriers at the entrance to the water area soon found its solution - it became a bomber aviation.

We are in Yandex Zen
Torpedo "boat-tanks". Italian-Austrian experience
Features of the combat use of torpedo boats on the Black Sea
10 comments
Information
Dear reader, to leave comments on the publication, you must to register.