"Great" Finland. Invaders, but not quite Nazis? 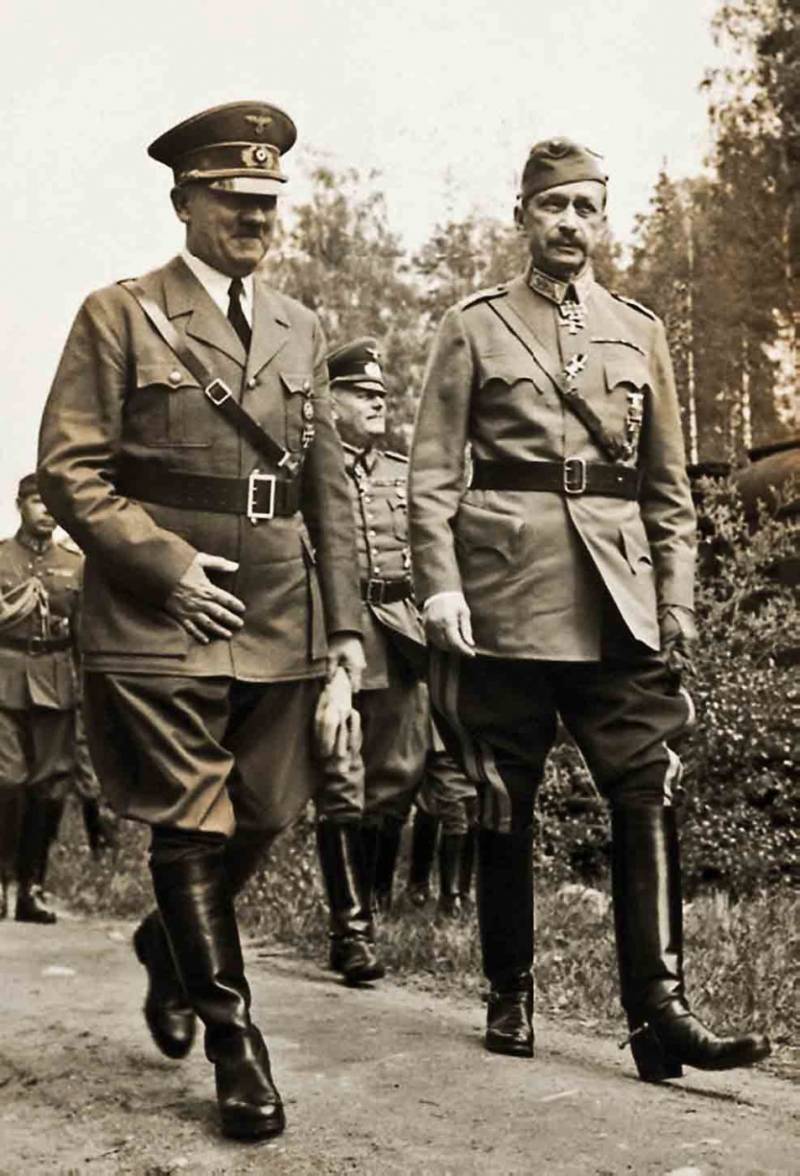 They "fell out" of Hitler’s pocket

In Finland, direct participation in Nazi aggression against the USSR is preferred to be accurately called complicity, but more often - "the continuation of the Winter War." Bearing in mind, of course, the dramatic events of 1939-1940. Until the spring of 1944, public events were regularly held in Suomi, often with the participation of Marshal Mannerheim and his officials, in support of restoring Finland's "legitimate" borders.

In this former province of the Russian Empire, which was essentially autonomous, in this not-so-great country, to defeat which the mighty USSR needed incredible efforts, they considered themselves infringed on by the Soviet-Finnish armistice on March 12, 1940. With the height of World War II, Finland’s claim to greatness, of course, at the expense of the “big neighbor,” only grew. 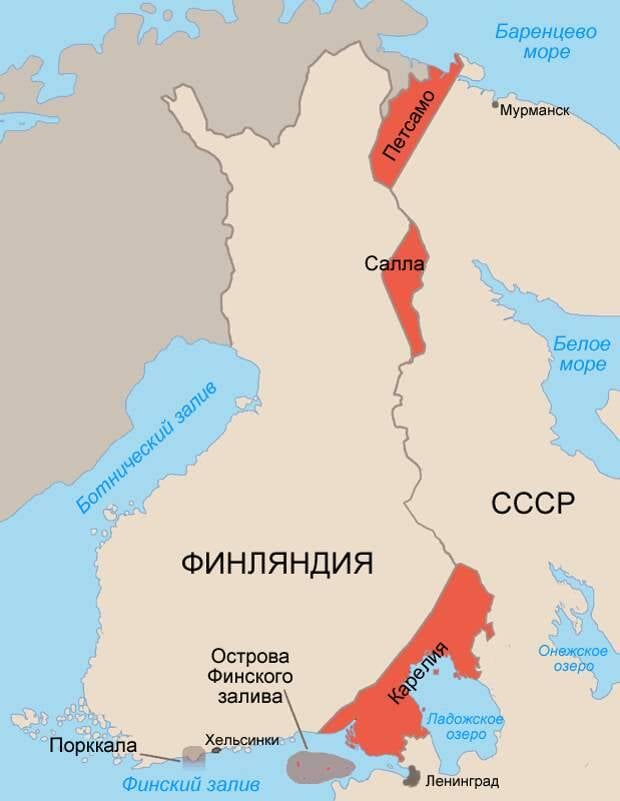 However, the implementation of such claims had to be paid literally. And pay complicity in Nazi aggression. And not just complicity, but also the implementation of the same occupation policy in the occupied territories. What is the “new order” in Finnish for three years of the Finnish occupation, the inhabitants of the distant Soviet North also had a chance to learn.

It is well known that only by the summer of 1944, after the final breaking of the Leningrad blockade, did Soviet troops enter the line of the former (until 1940) Soviet-Finnish border. And the authorities of Suomi were able to realize in time the consequences that the manic claims of the country on the border line that existed between 1918 and 1939 would lead to.

It is clear that immediately it was necessary to drop the claims almost to the entire North-West of the USSR. A number of Finnish politicians nominated them already in the early 1920s, when the Soviet leadership transferred the port of Pechenga to the newly formed Finland on the coast of the Barents Sea. By the way, this was done not only and not only for “reconciliation” with Helsinki - even in the conditions of NEP Pechenga could become an impossible project for the RSFSR and the USSR.

It is characteristic that Marshal Mannerheim personally did not participate in the proclamation of the "Great Finnish" claims, but, of course, they could hardly have been voiced without his sanction. This did not stop Hitler from considering Finland as something like a “pocket” ally, who simply would not go anywhere in anticipation of rich prey.

Such an assessment found a place even in the notorious "feast talks" of the Führer, which meticulously gathered one of his stenographers with an absolutely non-Aryan name and surname - Henry Picker. 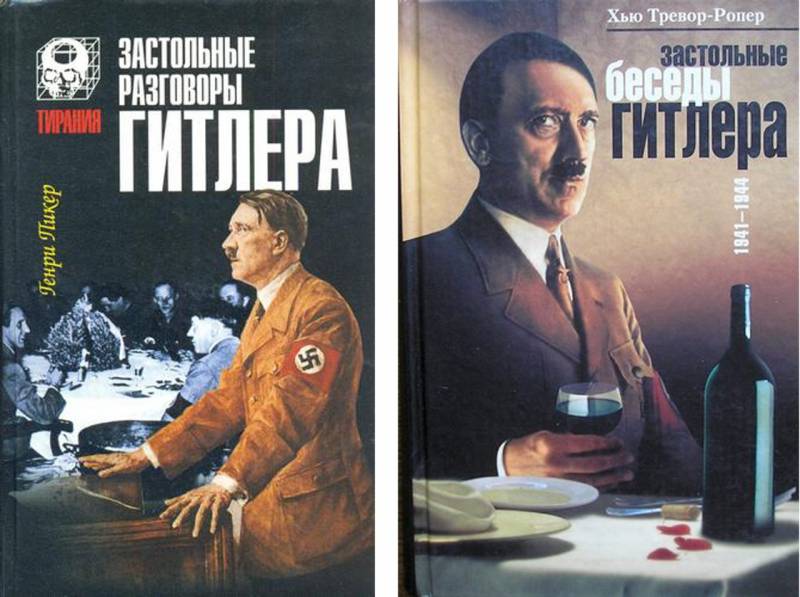 It is not surprising that Finnish requests during the war quickly spread also to a number of western regions of East Karelia and the Murmansk region, to half of the Ladoga water area and even to border areas in close proximity to the northern capital of the USSR. The border then, as you know, passed only 26-40 km from Leningrad and near Kronstadt.

When the inevitability of the defeat of Nazi Germany became a fact, Finnish diplomats managed to conclude a new truce with the USSR (September 1944). This happened with the mediation of Sweden, which was expertly stimulated by the notorious Alexandra Kollontai, who earlier managed to help the Swedes to remain “neutrals”.

It’s a paradox, but the Finns, unlike Romania and Bulgaria, and even Hungary, were actually allowed to evade the “mandatory” participation in the war with Germany. It is possible that the personality of the Finnish leader himself, a brilliant officer of the Russian imperial army, Baron Karl Gustav Mannerheim, regent, and then the President of Finland, played a role in this. The main thing for Moscow in the last months of the war was the establishment of unlimited good-neighborly relations with Finland. 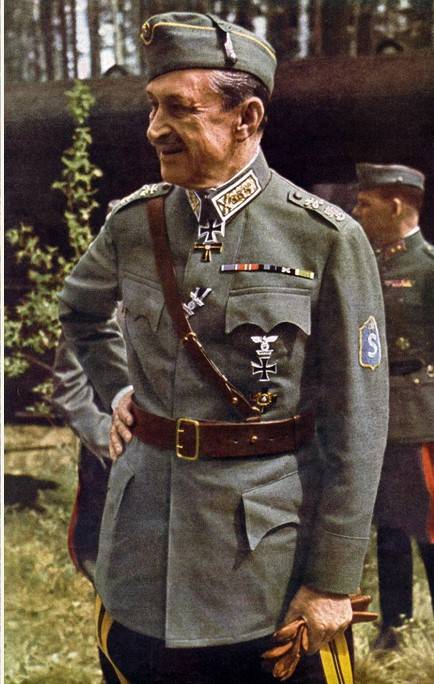 Because of this, by the way, back in 1940, Soviet politicians pragmatically abandoned the project “People’s Republic of Finland” by analogy with the Baltic Limitrophs. Mannerheim's loyalty to Finland also dictated the need to maintain good relations with Sweden. Politically and economically, they were extremely important for the USSR, providing also a problem-free northern flank.

Ghost of Nuremberg in Helsinki

A few days ago, in the Main Investigative Department of the Investigative Committee of the Russian Federation, a criminal case was opened on the grounds of a crime under Art. 357 of the Criminal Code (genocide). It was established that after the invasion of the Karelian-Finnish SSR, the command of the occupation forces and the occupation administration was created in August 1941 - October 1943. at least 14 concentration camps. 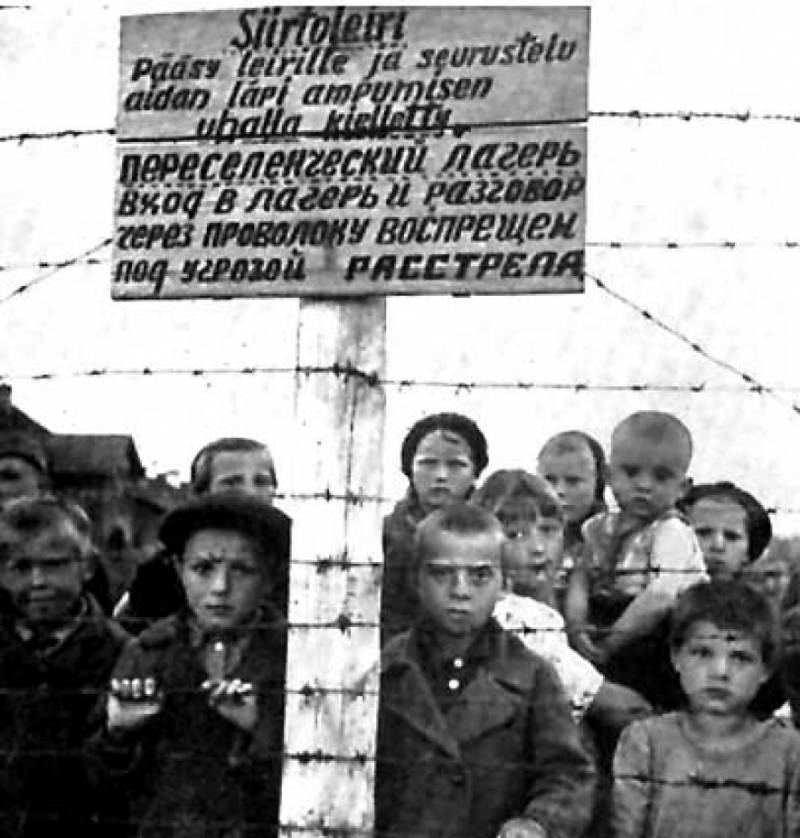 The camps were intended for the maintenance of the ethnic Russian population, living conditions, food standards and labor duties in which were incompatible with life. The largest concentration camp with the most severe regime was in Petrozavodsk (over 14 thousand people in 1942-1944). And for the entire period of the occupation of the region, at least 24 thousand people constantly stayed in these camps, of which at least 8 thousand died, including more than 2 thousand children.

At the same time, the main causes of death, contrary to the assurances of a number of Finnish historians and politicians, were not "natural". Over 7 thousand prisoners of war (out of 8. - Auth.) Were buried alive, shot, put to death in gas chambers. In total, almost 50 thousand people passed through the “Finnish” camps, among them more than 60 percent were Russians, Belarusians, and Ukrainians. The Finnish occupation authorities considered the Slavic contingent a “non-national population” and subjected them to particularly cruel repression.

For a long time, practically no information about the “Finnish” concentration camps appeared in print. Why? Ville Pessi, the long-standing leader of the Finnish Communist Party, who led it from 1944 to 1969, in 1983, shortly before his death, released data on how the Soviet leadership informed the Finnish government in 1957 that Moscow was not insisting on continuing to investigate Finnish crimes occupiers during the war.

This happened immediately after the abandonment of the long-term lease of the naval base at Porkkalla-Udd west of Helsinki. Moreover, as noted by V. Pessi, already in the last two years of Stalin's life in the USSR, publications on this sensitive topic were minimized. By the mid-50s they were completely "stopped". At the same time, almost nothing was reported in Soviet historiography about the participation of the Finnish army in the blockade of Leningrad.

Moreover, the Soviet media for a long and stubborn silence about the German-Finnish military operations in Karelia, the Murmansk region and the Baltic. And Finland's support for the German occupation of Norway and Denmark, which lasted from 1940 to 1944, was hushed up in the USSR from the mid-50s. The local press immediately fired the editors-in-chief.

This, however, was trying to inform not only Ville Pessi. Pavel Prokkonen, who twice headed the Council of Ministers of the Karelian-Finnish SSR, had similar assessments of events, and with the demotion of the republic to autonomous, he became chairman of the Supreme Council of Karelia. Prokkonen never ceased to object that the topic of Finnish complicity in Nazi aggression had been leveled by the leadership of the USSR — even in Karelia — since the mid-50s. 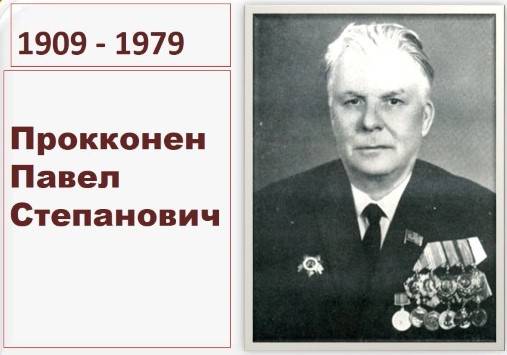 However, from Moscow, the leadership of Karelia, as well as the Murmansk and Leningrad Regions, was repeatedly "exposed" for periodical publications on this subject in local, even small-circulation media. The appeal to Moscow regarding the establishment of commemorative signs in honor of prisoners of Finnish concentration camps in the USSR also declined or remained without clear answers.

According to Pavel Prokkonen, such a “line of conduct” was due to Moscow’s desire to prevent Suomi from drifting into NATO orbit and making Helsinki’s official territorial claims against the USSR at all costs. It is interesting that the Karelian communist has repeatedly called the famous Soviet-Japanese declaration of 1956 a precedent in this sense, where Moscow expressed its readiness to transfer the South Kuril Islands of Shikotan and Habomai to Japan.

The fact is that a number of the eastern regions of pre-war Finland were, recall, the original Russian (Russian) territories transferred to it in 1918-1921. in order to avoid a military alliance between Suomi and the Entente. And the aforementioned post-war "benefits" from the USSR, Finland was obliged to the desire of Moscow at all costs to maintain friendly Soviet-Finnish relations. The Treaty of Friendship and Mutual Assistance, signed in Moscow in 1948, was prolonged in 1955, 1970 and 1983 - until the dissolution of the USSR.

In such a coordinate system, Helsinki’s policy during the years of the Great Patriotic War needed to be hushed up. Accordingly, Moscow did not officially react, and still do not, react to periodic outbursts of allegedly public campaigns for the return of Finland to the “lost” Pechenga (North Russian, with the Finnish name Petsamo), western part of East Karelia and most of the Karelian Isthmus (together with 60% water area of ​​Lake Ladoga, including Valaam).

Meanwhile, the influential Finnish "Ilta-Sanomat" (Helsinki) of April 20, 2020, surprisingly, actually recognized the very fact of the brutal occupation policy of the Finnish authorities, and even the fact that the investigative actions of the IC of the Russian Federation are quite justified:

Joseph Stalin had a clear idea of ​​the Finnish atrocities even during the war before the Soviet troops captured the territories occupied by the Finns (namely occupied. - Auth.). At a conference in Tehran in late 1943, Stalin described the behavior of the Finns in the occupied territories as cruelly as the Germans. 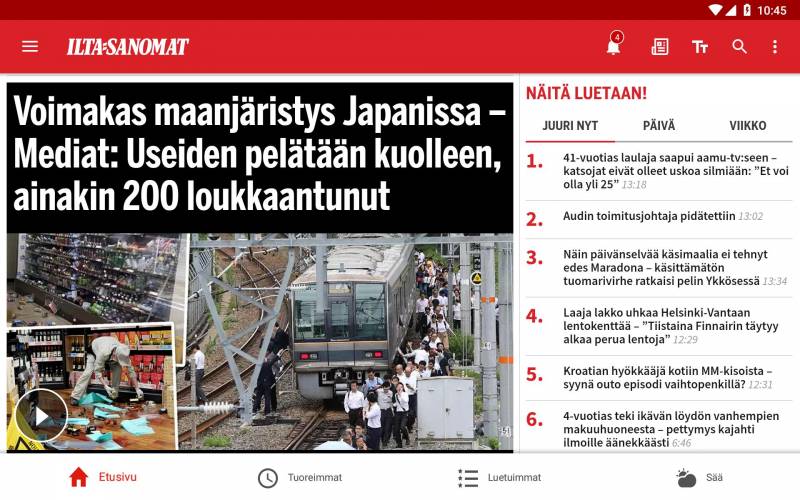 However, what follows is an excuse that cannot be called primitive:

The attitude of the Finnish occupiers towards the population of the conquered territories differed from the attitude of the Germans in that almost half of the 83 inhabitants of East Karelia, that is 000, were with Finnish roots. They received better treatment than Russians in the area.
Needless to say, it’s strongly said ... But it turns out that those camps "were based on fears that the Russian population could take part in the guerrilla war and destruction in the rear of the front. Instructions for collecting the population with Nefin roots in internment camps were given in July 1941. "

Nevertheless, the Finns have to admit what they did:

The assimilation of Finnish concentration camps (which means concentration camps? - Auth.) Into death camps is completely incorrect, although the infamous (that is, infamous in Finland. - Auth.) Classification by ethnicity was practiced.
At the same time, "mortality in internment camps", which is recognized, "in the occupied East Karelia was ... significantly higher among the rest of the population of the region." The explanation for this is more than objective: "The reason was the poor nutritional situation." Just?!

What is called, with a considerable creak, but the Finns still have to call their policy of occupation in 1941-1944. But it’s hard to say how the mentioned actions of the RF IC will affect Russian-Finnish relations. In any case, Finland has already signaled its withdrawal from Moscow-friendly neutrality and already in 2014 joined the anti-Russian sanctions of the United States and its allies.

Therefore, a "reminder" of the Finnish occupation policy in the USSR could turn into an answer in the form of, say, "semi-official" territorial claims - at least in terms of propaganda ...

Ctrl Enter
Noticed a mistake Highlight text and press. Ctrl + Enter
We are
Diplomats of the People's Commissariat of Defense: on the eve and during the warStalin and Finland
175 comments
Ad