A story about a war veteran A.F. Pristupenko 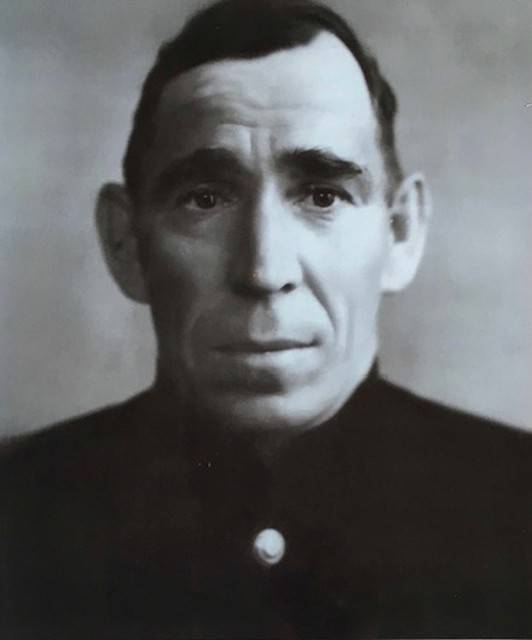 I will tell about my great-grandfather - Pristupenko Akim Fedorovich.


Pristupenko Akim Fedorovich was born in 1905 in the city of Azov, Rostov Region. Passed military service at sea navy, created a family, worked at the Azov fish factory, was a member of the CPSU (b) - the All-Union Communist Party (Bolsheviks). He participated in the Soviet-Finnish war (1939-1940).

In 1941, the Great Patriotic War began. He was drafted to the front, in the 8th Marine Brigade of the Black Sea Fleet. At first he served in a rifle company, then, after a wound, he performed tasks to provide food for military personnel. His responsibilities included the reception, maintenance and storage of products, knowledge of the basics of cooking, the preparation of high-quality three meals a day. Professionally important qualities: training, a high sense of duty, hard work, the ability to keep everything clean and tidy.

Soon he became a senior instructor, who was appointed from among the best and most qualified specialists. His responsibilities included the proper organization and distribution of work between services, briefing, determining the composition and order, transferring shifts, checking appearance, monitoring the work of subordinates, their training, compliance with technology rules, equipment operation and maintenance of the shift.

Higher authorities entrusted him with great responsibility through the naval counterintelligence.

The Soviet fleet was under the scrutiny of foreign intelligence services. German intelligence focused on obtaining reliable information about our navy.

In the first months of the war, the need for military counterintelligence increased sharply. To solve this problem, at the Higher School of the NKVD of the USSR, training courses for operational workers for special departments were organized. Work in this direction in the Soviet fleet was carried out by the organ of the 3rd Directorate of the NKVMF.

The following tasks were assigned: the fight against sabotage, espionage, terror, sabotage, the adoption of necessary measures to prevent the penetration of enemy agents.

In 1943, the Higher Counterintelligence School SMERSH was organized in the People’s Commissariat of the Navy (abbr. Death to Spies). Political workers were responsible for the morale of the personnel, inspired the sailors before the battle.

During the war, operational interchangeability was valued first. During the battle, the composition of the naval brigade suffered numerous losses, mutual assistance was always required.

In connection with the martial law, many took possession of various specialties, including my great-grandfather. Akim Fedorovich Pristupenko, being a senior in the distribution and organization of food, also took part in naval battles and in counterintelligence. He fired from a gun during an attack and assault on the enemy. After winning the bloody battle for Sevastopol, he received a new position and an additional specialty - steering, navigator.

8th Marine Brigade played a large role in the battle for Sevastopol 1941-1942. Arrived on October 30, 1941 and immediately took part in the battles at one of the most difficult battle sites (brigade commander - Colonel V. L. Vilshansky). The most fierce battles erupted near Mount Azis-Oba. In two days of bloody battles, the 8th brigade lost more than half of the composition, about 1800 people.

During the offensive on December 24, the Germans launched an attack. Colonel V. L. Vilshansky personally led the last battalion, which was in reserve, to counterattack. The enemy was driven back. Reinforcements, the 79th Marine Corps and the 345th Rifle Division, arrived at our troops. Soviet soldiers held the Sevastopol bridgehead. Distinguished by their courage and courage, the death of the brave fell many of the military commissars of battalions, commanders, officers, sailors.

In January 1942, the updated 8th Marine Brigade was created, which included the 7th Marine Brigade and the 1st Marine Regiment. The commander of the second formation was Colonel P.F. Gorpishchenko.

The defense of Sevastopol lasted 8 months, this helped to disrupt the plan of the German command to capture the Caucasus in the fall of 1941, which helped the Soviet counter-offensive near Rostov in November 1941.

The decisive factor in defense was the moral factor in extremely difficult conditions of the struggle, as well as the use of bold and flexible methods of military operations. The German command was forced to recognize the endurance and incredible stamina of the Soviet soldier.

In 1970, on the 14th kilometer of Simferopol highway in honor of the soldiers of the 8th brigade, a memorial sign was built - a stele of stone with memorial plaques.

After the battle in the battle for Sevastopol, my great-grandfather was listed as missing, as evidenced by the printed book in memory of the heroic city of Sevastopol (Volume 4). But he survived.

During a terrible battle, along with everyone, he began to storm the enemy. Shot from machine gun and mortar technology. Our warship was also subjected to heavy shelling, suffered huge losses of personnel, urgent help was needed in steering. My great-grandfather coped with this task.

When counting during the round after the battle the dead, wounded and surviving, he was considered missing in the battles for Sevastopol.

When forming the new composition of the Black Sea Fleet at the military transfer point, he was issued a new certificate: position - helmsman, military rank - sergeant, duty station - 2 NKVMF house.

The Great Patriotic War claimed the lives of millions of Soviet citizens. A lot died in severe battles. My great-grandfather’s brother, Vladimir Fedorovich Prostupenko, was a military intelligence officer. He was distinguished by enormous endurance, had excellent physical data. In the winter cold, secretly, across the ice of the sea on skates, with fast speed, he resorted from Port Caton to Azov for secret data and orientations. He got the reconnaissance he got into a horse and immediately delivered it back to Port Caton. Heroically died in 1944, in the battles for the city of Kerch. On the highest peak of the city, Mount Mithridates, there is an obelisk of memory and glory to the heroes of Kerch and Crimea, where his name is engraved.

My great-grandfather, Akim Fedorovich Prostupenko, was awarded orders and medals for the courage, courage and bravery shown in battles. He talked a lot about the naval service, the heroic deeds of sailors and officers, about meeting at the party meeting with the chairman of the Soviet Army food and food supply committee, the GKO transport committee, a member of the national economy restoration committee, and in the areas liberated from fascist occupation, Anastas Mikoyan was personally invited by him to work as the chief chef in the Kremlin canteen. On his behalf, a specialized train came for his family to move to Moscow, but my great-grandfather decided to stay and restore his hometown of Azov from ruins.

We are in Yandex Zen
Eighteen days of feat. In heaven and on earth
To the 75th anniversary of the Great Victory. Front Road Alexander Krestovnikov
10 comments
Information
Dear reader, to leave comments on the publication, you must to register.