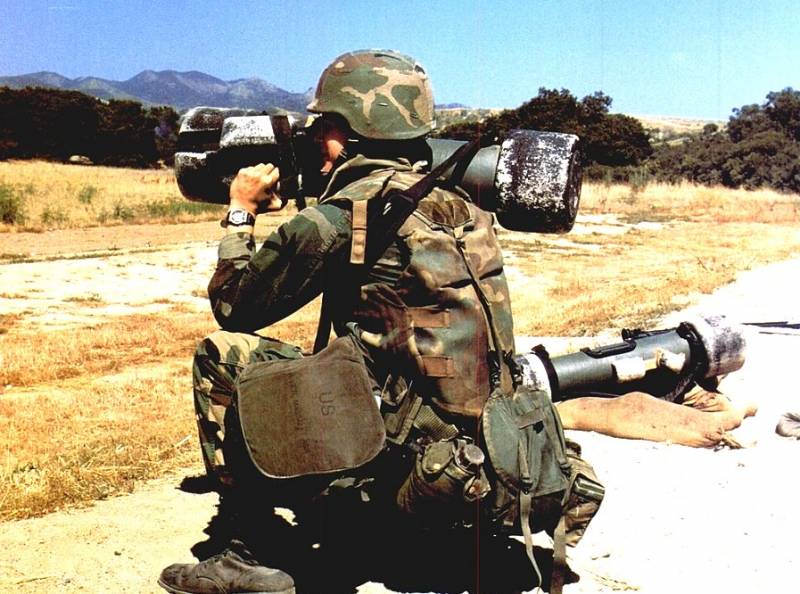 To reduce the dependence of the infantry on anti-tank units, the United States at one time found a pretty good way out - armed parts of the Marine Corps FGM-172 SRAW, which are also called "light javelins."


The FGM-172 SRAW Predator is a disposable anti-tank missile system. However, it is more often called a large-caliber grenade launcher, although in the classification of NATO countries only weapon reusable, and all other samples are classified as "rocket launchers."

The need for arming linear infantry units with such weapons in the American army was thought back to the distant 1980s. After all, the American armed forces then felt a lack of heavy weapons for the infantry squads, with which the infantrymen could independently solve the tasks of defeating the enemy’s armored vehicles.

As a result, in 2002, the Marine Corps acquired “light javelins” manufactured by Lockheed Martin Corporation. So the large-caliber grenade launchers were nicknamed for good reason, because, in fact, they are a lightweight modification of the FGM-148 Javelin with some nuances. The FGM-172 SRAW is a disposable grenade launcher and uses 140 mm caliber ammunition. The effective firing range is 400 meters - not so bad for such a weapon.

Hiding in buildings and structures, an infantryman armed with an FGM-172 SRAW can safely track a target and launch a missile. This makes ATGMs of this type a very effective weapon during military operations in urban conditions.

The undoubted advantage of the "light javelin" is the inertial control system. The shooter may not pay attention to related factors in the form of air temperature or wind level. Thanks to the autopilot of the rocket, it is held on the aiming line, and during the flight the autopilot fulfills the lead angle to the meeting point with the target. In fact, the American infantryman is holding a high-precision weapon in his hands, which allows him to fire a shot, hit a target, and further solve other combat tasks.

In the head part of the rocket are a head fuse, a programmable detonator and a warhead made with a funnel forming a shock core. The warhead is undermined by a signal from a head fuse or with a slowdown. If the detonation is carried out immediately, then the charge forms a shock core, breaking through the defense of the target.

The hole in diameter is wider than the body of the rocket, with some of the explosives striking targets behind cover by fragments of the body. If we talk about deceleration, then the charge is activated after the penetration of the rocket into weak shelters, for example - into trenches and other earthworks.

The FGM-172 SRAW has obvious cons

It is because of them that this weapon did not suit the American marines.

First of all, this is a solid mass of weapons - 9 kg. In addition, because of the inertial missile control system, it was necessary to reduce the mass of the warhead, which weighs 2 kg 300 g, which experts consider to be insufficient for ammunition of this caliber.

Another drawback, though not of a technical, but of an economic nature, is the high cost of a one-time ATGM. This circumstance has become one of the main obstacles to equipping most of the linear units of the American infantry with such weapons. After all, at first it was assumed that almost every infantryman would be armed with a “light javelin”. It turned out to be expensive, and even pointless after the reduction in connection with the collapse of the "eastern block" of the huge tank fleet, which the Soviet army possessed.

As a result, the U.S. Marine Corps was armed with a modest amount of FGM-172 SRAW. It is about 1000 units. Indeed, at the company level, the Marine Corps prefer the heavier FGM-148 Javelin.

Most of the “light javelins” may have been upgraded to FGM-172B, designed to destroy light armored vehicles (armored vehicles, armored reconnaissance vehicles) and enemy ground fortifications, but this weapon, apparently, was expended during numerous and lengthy American campaigns Army in the Near and Middle East.

Ctrl Enter
Noticed a mistake Highlight text and press. Ctrl + Enter
We are
Situational analysis of the death of the MH17 flight (Malaysian Boeing 777), made on the basis of engineering analysis from 15.08.2014Strangulation: the context, conduct and consequences of the American naval blockade of China
24 comments
Information
Dear reader, to leave comments on the publication, you must to register.