But still - in your pocket? What forces woke up the "Besogon" Nikita Mikhalkov 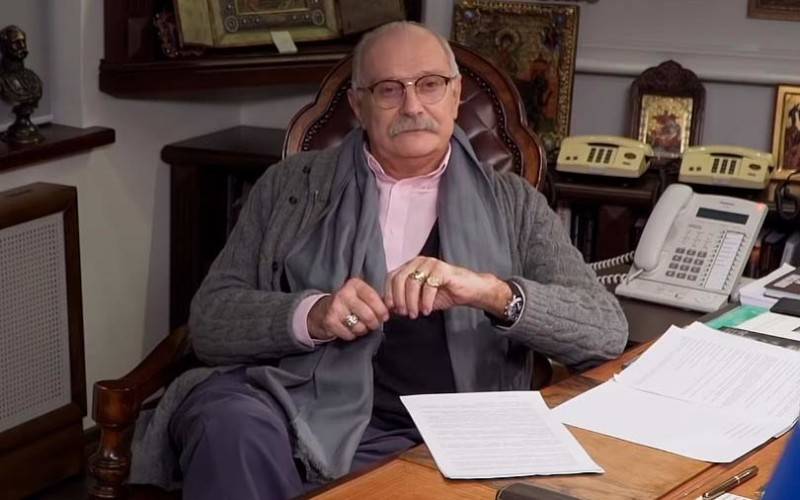 The program of Nikita Mikhalkov "Besogon-TV" can be called ambiguous. As well as many examples of his work. Nevertheless, with respect to any vivid publicistic speech that provokes an instant, furious and negative reaction, as happened with the last release of the program, which bore the initial “seditious” name: “Who has the state in his pocket?”, One can definitely say: it got a bullseye and painfully stung someone very powerful. Moreover, the program woke up certain (or indefinite?) Forces.


The removal of the program from the air of the VGTRK, its transfer to night time, Nikita Mikhalkov himself immediately announced by censorship. We’ll clarify that it was not about the complete extinction of the immediately scandalous release from the broadcast network, but about its unobtrusive pushing in at the most unrated hours (23 hours 1 May and 3 am on May 2), when the chances of the screens having a sufficiently large audience are minimal. But for some reason, categorically refused to repeat “Besogon” at the usual hours for the fans on the channel. In this regard, Mikhalkov generally expressed doubts that the program will continue to exit, especially at the All-Russian State Television and Radio Broadcasting Company.

You can understand it: it was painfully serious forces instantly set in motion, so very “large calibers” opened up “aimed fire” for the director, as if giving an unambiguous answer to the rhetorical question posed to him. At the same time, there is a “shooting to kill” - seriously, without fools, without any discounts on high status and considerable merits. “A bunch of twisted horror stories”, “flashes of twilight consciousness” - this is from an article in “Komsomolskaya Pravda”, designed to explain to readers that the “Great Director” has reported itself, that he is recording it in vain “scares the average man with gadgets and the world behind the scenes.” However, this is so, "flowers" ...

“Chad of conspiracy therapist revelry”, “potpourri of all paranoid concepts at once” - this is how “Besogon” is smashed to pieces at RIA News, incidentally, rather clumsy and ugly alluding to the fact that Mikhalkov "may have personal problems and interests", by virtue of which he decided to "roll on characters that are not nice to him." I wonder who is referring to? Who is the author of Besogon having these “personal problems” with? Didn’t you share something with Bill Gates? Offended by Sberbank, and specifically German Gref? It seems that the authors, who were given a clear and unambiguous editorial assignment: "Write a devastating review!" Desperately cling to at least some reason, something that could be faulted.

At the same time, trying to accuse Mikhalkov of “conspiracy thesis” and “attack” on, presumably, very good, worthy and right people, his critics for some reason amicably keep harsh criticism in the indiscriminately criticized Besogon of the activities of the same Yeltsin- center ”, the very existence of which, for many Russians, causes, to put it mildly, bewilderment. It’s strange - they interceded for Gref, for Gates too, they didn’t forget about Valentina Matvienko. And about it - silence. So isn’t the “wind blowing” from there? Very, you know, maybe, especially when you consider that the main thing the author of the program is against is liberal-technocratic ideas, which, in essence, can indeed be no less cannibalistic upon closer examination than the ravings of National Socialists.

What are Mikhalkov accused of?

Mikhalkov is accused of “provoking”, “knocking everything together,” “distorting the facts” and “quoting out of context” - saying, when talking about “the state in your pocket”, the cutest people mean something white and fluffy , designed to make our lives incredibly easier and make it much simpler and carefree. About, what is the flip side of this "simplicity", which consists in more and more improved methods and possibilities of control over human life, of course, is silent. And distance learning is not even evil at all, but almost a blessing! No, nobody is going to introduce it in Russia, but just in case we explain that there is nothing terrible in it ... In my opinion, the answer to the question of who “juggles” and “juggles” Mikhalkov or his opponents on a surface.

It is difficult now to unequivocally state what exactly in the program caused such a flurry of negativity - mentioning specific surnames or extremely uncomfortable facts of foreign presence ... And, perhaps, a bitter recognition of the obvious fact that “strategic thinking”, the ability to calculate global actions and their long-term consequences the state of Russia to this day, alas, is lame. However, an extremely aggressive reaction to the program itself indicates that some naked nerve Mikhalkov managed to hurt, poke, roughly speaking, in a sore spot. And as for conspiracy thesis ... Her adherents in no way give advice to think and compare, reason and doubt. But it is precisely precisely this that, throughout the entire broadcast, Nikita Mikhalkov has been calling his audience. So here by, gentlemen. Definitely by. Moreover, the reaction to the program again leads to the question: "is it still in your pocket?" If you have reacted so violently, then the question itself should be comprehended.

We are in Yandex Zen
About Stalin and Khrushchev
What you didn't want to know about England
258 comments
Information
Dear reader, to leave comments on the publication, you must to register.