Destroy, you can’t sell. USA get rid of food

The grimaces of capitalism

The food destruction process is not an American idea. When developed countries saved their hunger, excess food was often destroyed. Naturally, this caused a resonance in society. In Russia, as you know, the outrage has not prevented the destruction of more than 32 thousand tons of sanctioned food products of animal and vegetable origin over the past four years. These steps, at first glance barbaric, have a serious economic justification.

Firstly, this is done because it is “not allowed”: at the legislative level, sanctions products are prohibited in Russia. Secondly, the state takes care of the stability of the domestic market: smuggled goods can lower prices for similar products, and this is a threat to employment and income levels. Even the French are not averse sometimes to destroy the exquisite delicacies of their own production, protesting against the import of foreign counterparts.

The situation is very similar to the energy market with the existing cartel conspiracy of leading oil producers. In both cases, a reduction in supply leads to an increase in the value of the goods. Moreover, not only food products go under the knife. So, in April 2014, the Belgians destroyed 1,5 tons of smuggled ivory in protest against poachers. And, of course, seriously raised the price of this product on the black market. In Singapore, the skin of lizards and pythons is regularly destroyed at customs. Five years ago, Indonesia became famous for the destruction of several tens of thousands of medicines and cosmetics.

The second reason for the destruction of smuggled, or, as in the case of Russia, sanctioned goods, may be a failure to comply with sanitary and epidemiological standards. Clandestinely imported meat, dairy products or, for example, canned goods may well cause mass poisoning, and sometimes outbreaks of infectious diseases.

Corruption can be attributed to the list of reasons for the refusal of most countries to distribute to the poor products to be destroyed. It turns out that it’s much easier to dump hundreds of kilograms of poaching caviar than to give local officials the right to distribute products. Who will guarantee that in the future this will not become part of the shadow business? 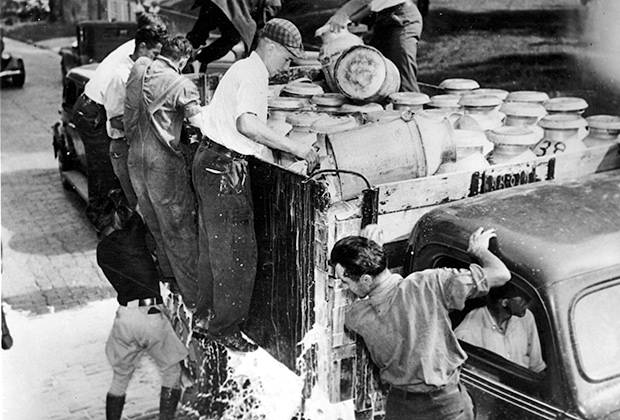 Source: lenta.ru
One of the first in stories US officials from the time of the Great Depression decided to destroy food. At the same time, in one part of the state people stood in line for a free lunch, and in another part of the farmers poured tons of milk into the ground. This, incidentally, was legally regulated: in the United States since 1933, the government purchased from farmers meat and vegetables for subsequent destruction. Also, the reduction of sown areas was encouraged in every way. Farmer Assistance Program (Agricultural Adjustment Act) - the so-called Franklin Roosevelt initiative to mitigate the effects of the overproduction crisis. Grain, for example, could simply be taken out into the ocean and dumped into the water. At the same time, even at food recycling points, half-starved Americans were not allowed to replenish scarce food supplies. John Steinbeck writes in the novel “Bunches of Wrath”:
“This is a crime that has no name. This is grief that cannot be measured by any tears. This is a defeat that crushes all our successes to dust. Fertile land, straight rows of trees, strong trunks and juicy fruits. And children dying from pellagra must die, because oranges do not bring profit. And investigators should issue certificates: death as a result of malnutrition, because food must rot, because it is rotted intentionally. People come with nets to catch potatoes from the river, but the guards drive them away; they arrive in rattling cars for discarded oranges, but kerosene has already done its job. And they stand in a daze and look at the potatoes floating by, hear the screech of pigs, which they cut and fill with lime in the ditches, look at the orange mountains, on which the landslides of the fetid slush come down; and in the eyes of people defeat; anger is ripening in the eyes of the hungry ... " 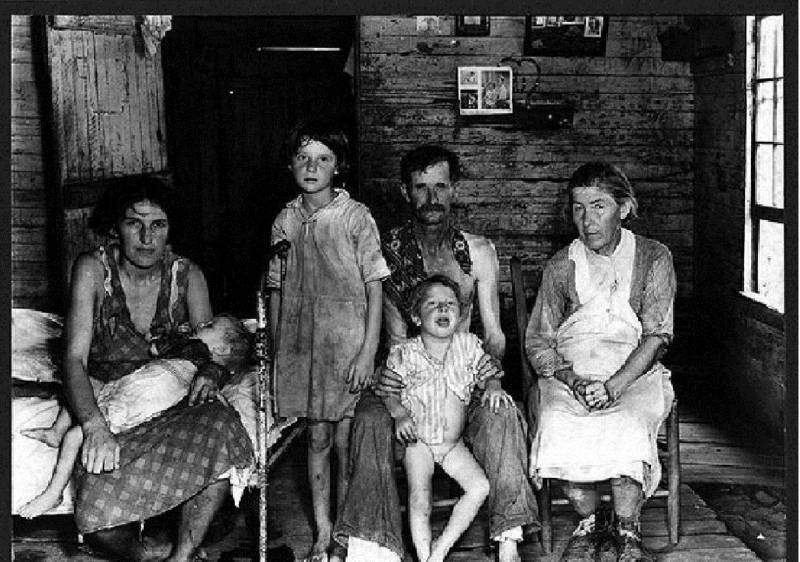 Source: cont.ws
In those days, tough economic interests prevailed over humanism - in 1933, the government immediately bought 6 million pigs for extermination. As a result, the famine of the Great Depression really became great and claimed several million lives. At the same time, the population had practically no cash, for which they could easily purchase food for themselves. As a result, purchase prices fell, and farmers, without prompting from the government, independently poured milk into the ditch. Now the world is ruled by a coronavirus and it seems that the troubled times of the 30s of the last century are returning to the United States.

The Phantom of the Great Depression

American life has stood still, and so far, even approximate dates for the restoration of previous activity are not visible. If earlier optimism was at least somehow charged with expressions like: “Quarantine is not always forever - it will someday pass”, now there are more and more votes for everyone to have a new life with fanatical observance of hygiene standards. For Americans, the ghost of the Great Depression seems to be adding to the new reality. As you know, the more highly developed a country is, the smaller the percentage of citizens eating at home. Just because it is much easier to go to a cafe, restaurant, eatery and replenish the balance of carbohydrates, fats and proteins than to cook at home. Yes, and the second half in the families of highly developed countries often work, and they just do not have time for the kitchen. In the US, with their traditional gigantic consumption of fast food, this process has been squared. And that’s it: public catering was closed, schools and universities with canteens are also in quarantine, and the most powerful agriculture continues to saturate the country with food. In total, consumption fell almost twice. The inertia is such that the excess of meat, milk, vegetables and fruits must be destroyed. Now every day in the USA they pour almost 14 million liters of milk on the fields, into the sewers, or simply into the nearest ditches! If in the near future the coronavirus does not recede and the government does not weaken quarantine, farmers threaten to reduce the number of cattle. And these are already long-term crisis phenomena, which after the pandemic will be tangible for more than one year. Accustomed to a comfortable life, American inhabitants may not understand the serious jump in prices for dairy products and meat. The situation with vegetables and fruits is also not going well - many producers are forced to "return to the earth" hundreds of tons of crop crops. 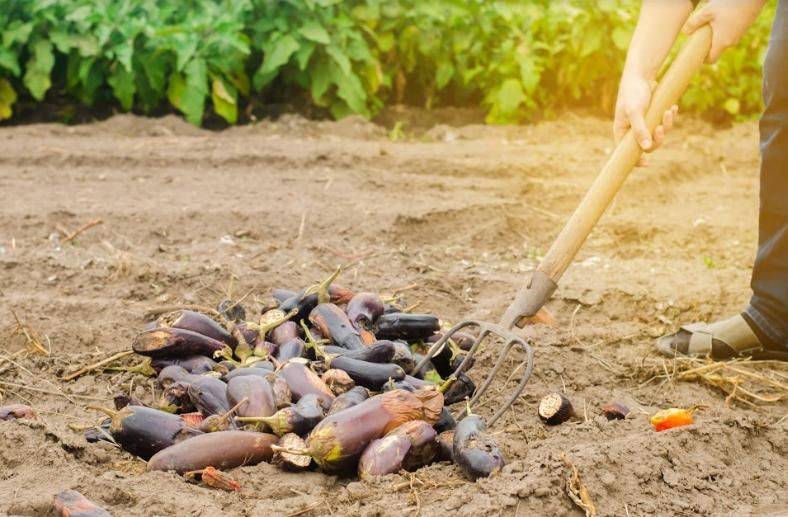 Source: mizez.com
At the same time, the pandemic inflicts another blow to the US agriculture - employees of many farms and processing enterprises are infected. So, Tyson Foods, the largest meat producer in Iowa, went to quarantine. This giant processed 19,5 thousand pigs per day. At the end of April, about 15% of all meat processing enterprises in the industry in the USA for various reasons stopped their work. In conditions of decreasing demand and, consequently, lower profits, it is unprofitable for farmers to feed pigs further, hoping for an improvement in the situation, and thousands of animals go for slaughter. The American conveyor of consumption was so dependent on the appetite of the population that capacities for preserving products were not provided. Neither refrigeration units are enough (many of them were generally converted to store the bodies of victims of COVID-19), nor production facilities for the production of long-term storage products. But even in these cases, storage of agricultural products will cost a lot of money. In the USA, there were precedents when manufacturers were forced to pay extra to the client for the sale of goods, if only to free storage. Recall the situation with the negative cost of oil. The problem is also that it is difficult for Americans to offer their products for export - the labor costs in the United States are rather high and the third world countries, which would not refuse food even now, simply cannot afford it. Therefore, farm products are used up.

Source: agronews.com
I must say that the Trump government did respond and allocated about $ 3 billion to purchase surplus products from farmers. The decision, of course, is not in the spirit of Franklin Roosevelt, but now none of the politicians wants to face tens, or even hundreds of thousands of unemployed after the pandemic. In the future, the purchased products are planned to be redistributed among those in need in the country. True, they were late with measures for a month and a half: the process of destruction (and, accordingly, the reduction of workers) is in full swing. Of course, Trump, moving away from the crisis, will begin to pump in his agricultural producers with billions of dollars, hoping for an early recovery of the economy. But money is unlikely to help quickly restore the breeding stock of cows and pigs, especially since in neighboring countries and Europe the situation is also developing according to a negative scenario. Russia, for example, is stopping the export of wheat, and Canadian farmers, following the example of their southern neighbors, also began massively pouring milk into dung heaps and slaughtering cattle. In the future, there will be nowhere to buy fresh livestock, and the country will inevitably face a rise in price of products, and, probably, with their acute shortage.

The ghost of the Great Depression seems to have come to Europe. So, in France, Italy and Spain, due to a serious decline in demand, winemakers plan to distill their products into alcohol, which, in turn, will become the basis for disinfecting sanitizers. At the same time, manufacturers, as well as in the USA, call restaurants, bars and cafes closed for many weeks as the main reason for the decline in demand. Despite the fact that Europeans began to drink more alcohol at home, the general trend of reducing consumption (by 30%) makes winemakers think about eliminating stocks of products. In the most optimistic version, the wine will go to the mentioned sanitizers. New times - new food trends.

Ctrl Enter
Noticed a mistake Highlight text and press. Ctrl + Enter
We are
Agriculture and food security. Problems and ProspectsBashar al-Assad: In Syria, not the “revolution” that the enemies are talking about, but the revolution of the army and the people against terrorists
154 comments
Information
Dear reader, to leave comments on the publication, you must to register.