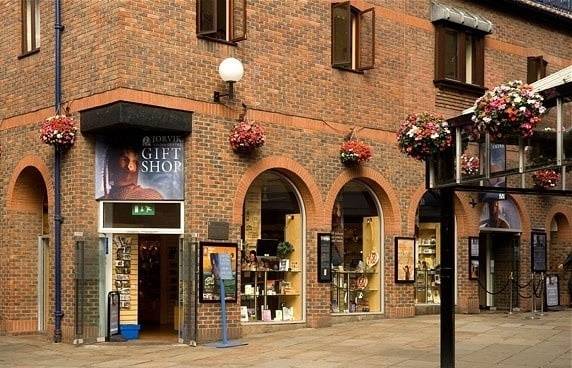 Entrance to the Viking Center in York

I sold the cloak clasp that Icelanders sent me and bought herrings; I also exchanged my arrows for herrings due to crop failure.
Vis Eyvind. M.I. Steblin-Kamensky. Proceedings in Philology. St. Petersburg: Publishing House of St. Petersburg State University, 2003

Museums of the world. It so happened that back in 1976, the Archaeological Trust of the British city of York, headed by director Peter Ediman, began excavating a small part of the ancient city, the territory of which was previously cleared for reconstruction. It took five years to carry out these excavations - the most thorough of all that have ever been carried out in the city. As a result, valuable discoveries were discovered, the age of which was a thousand or more years, on the basis of which one of the most interesting museums of Great Britain, the Viking Center “Yorvik” was later created. 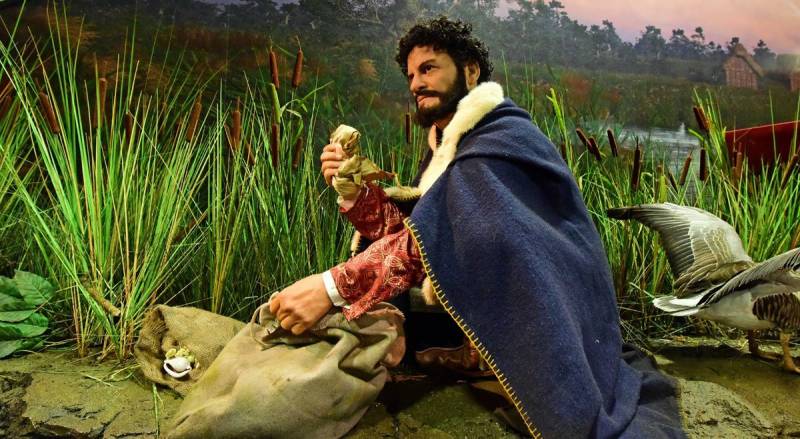 And whom only we will not meet in this center! Here is an Arab merchant with a bag of dirhams
The Vikings called York City the current city of York. The Viking Center is built under its modern shopping center. The museum recreates a vivid picture of York X century. The central part of the museum is a life-size reconstruction of the streets of the ancient city with five houses under thatched roofs. 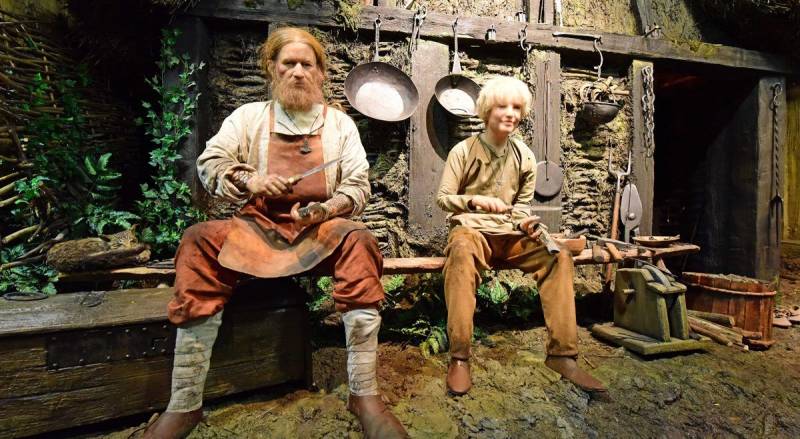 The blacksmith and his son
This quarter was, however, only a small part of the thriving ancient Viking city. Then York was the second largest British city after London, a center of agriculture and a river port, from which trade was carried out with the most remote possessions of the Vikings: from Scandinavia to the Bosphorus. Among the discovered finds are Arab coins, silk, apparently made in Byzantium, a shell from the Middle East. During the excavation, stamps were also found for minting coins, which suggests that in York there was a mint of its own. All the exhibits found during the excavations were subjected to the most thorough analysis, so that the employees of the Archaeological Trust can explain everything, even the smallest details of the Viking street they recreated. 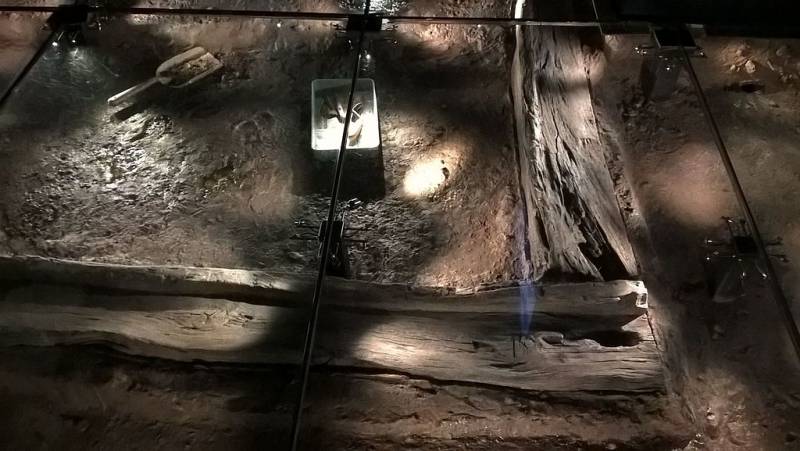 Part of the excavation has been preserved and covered with a glass floor! You walk on it and look ...
Visitors to the exhibition pass through it on ... special cars that move on magnetic tape. They trace recreated history York backwards: from the 1066th century to the Norman conquest of XNUMX, and then to the Viking era. Unfortunately, this trip is not accessible to everyone today, but let's visit this museum, so to speak, virtually, imagining everything that it can show us ... 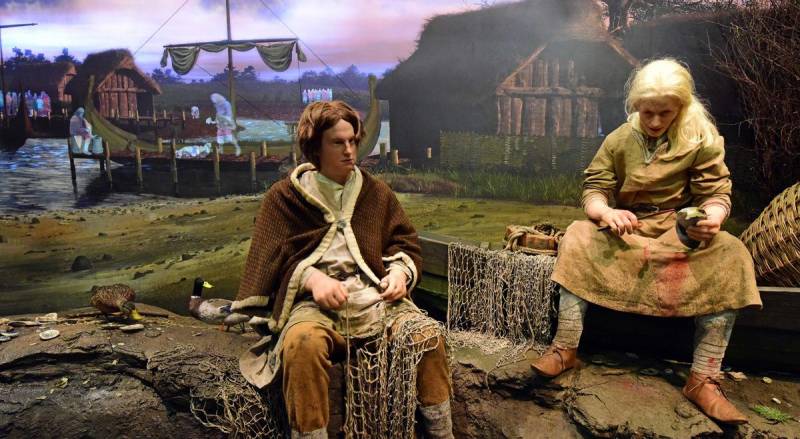 Fisherman and fisherman
And here we are in the museum. Time seemed to stop, and not just stopped, but stopped on a very specific date. This is October 28, 948, and we are located on Coppergate Street - the street of coopers and cup manufacturers. Let's stop for a minute and watch what is happening in this street market by the end of the day. Here's a bone carver, Torfastur, trying to sell the remaining combs and buckles from deer horns. Here is the apprentice turner in wood, Lodin, heading to his machine - this tool is skillfully restored on the basis of archaeological finds and is an exact copy of the machine on which the ancient craftsmen who gave the name Coppergate Street worked. Here is a tanning shop: in it, the old, obese Blafotre (which means the Blue Foot) can not find shoes that would fit his disfigured gout legs. Although we do know that on Coppergate Street shoes and boots of various styles were made. Yes, apparently, he was a little stingy on new things ...

All these people came to life thanks to the skill of the sculptor Graham Ibbsen, who managed to take a snapshot of all these inhabitants of the ancient city, frozen by his efforts in movement. Here is a counter with metal products, and next to it stands the court king, nicknamed the Blood Ax - the famous Norwegian nobleman Arinbjorn. In general, everything is very, very natural here, everything and everything is moving, even a rat eating a piece of fish looks like it is alive! 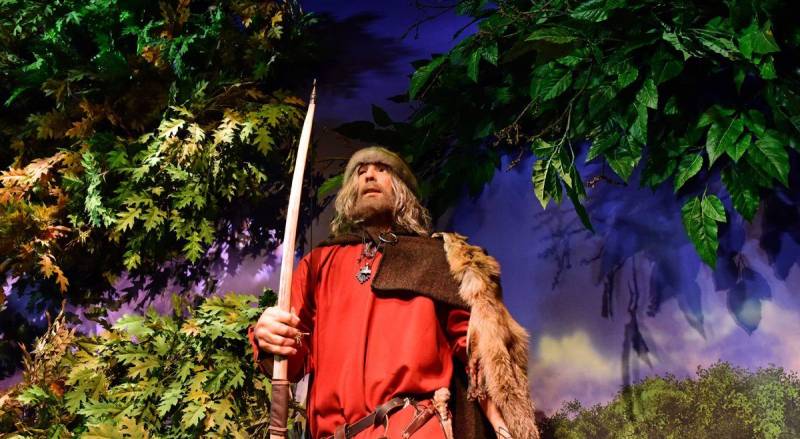 Viking hunter, a resident of Yorvika
The time of the busiest trading is over, but still on the street it is still noisy: we hear voices that are heard from all sides. This is done with the help of a sophisticated sound device with 64 audio tracks. Therefore, we can hear the authentic sounds of an ancient Viking street: neighbors gossip, children play, artisans sing at work, old people tell stories. For six months, University of Nottingham professor Christine Fell taught a group of children and adults in a North Yorkshire village the Viking language - Old Norse. A group of specialists even traveled to Iceland and made a number of sound recordings there, because the Icelandic language of all modern Scandinavian languages ​​is closest to Old Norse. 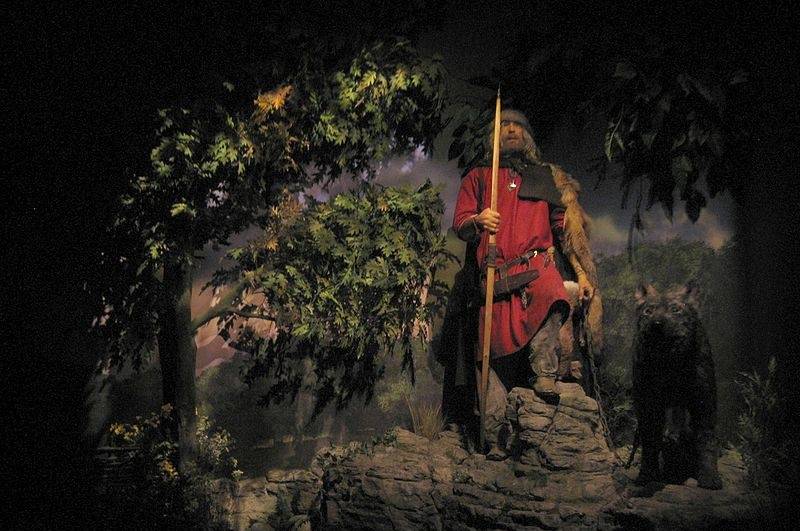 He is with a dog!
Now we move on to the embankment of the Foss River. On both its banks are houses, workshops, warehouses and courtyards. Some buildings are half-rooted in the ground: some are built of oak logs and planks, others, older ones, are made of twigs and coated with clay. There are one-story houses, there are houses with attics and even two-story ones. 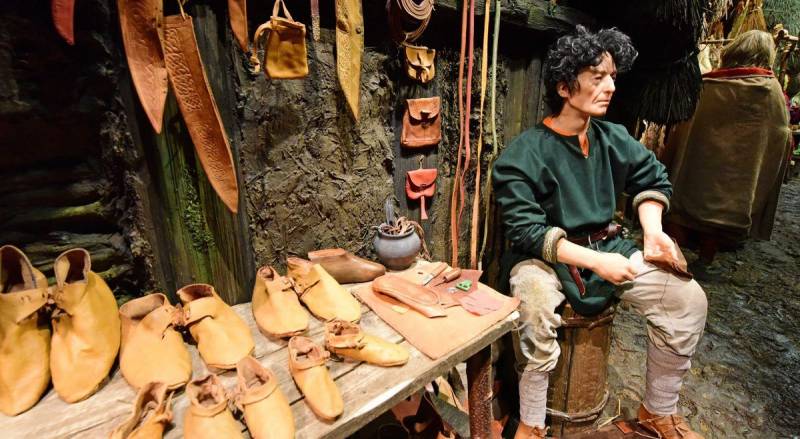 Tanner
This is a very lively place: turners grind a tree, jewelers make brooches, rings and pendants from jet and amber, women spin, weave, dye fabrics. In the distance, the manufacturer of coins mint a bargaining chip.

Here we turn off our route and go into one of the houses. Here, life is concentrated around the hearth: people eat, sleep, cook, play, work at the loom around it. The walls are made of rods, but it’s very cozy inside, although sometimes it’s a bit cramped ... If you go out into the back yard, all sorts of smells strike your nose. If you sniff, you can count up to 12 different smells that are specially created by the company, which usually produces means for their destruction. It smells of moldy apples, rotten fish and something worse. Smells actually come from tablets placed in special vessels; the tablets are heated all the time and changed daily. Here are the pigs digging in the corral, nearby - pits with garbage and another pit replacing the restroom. 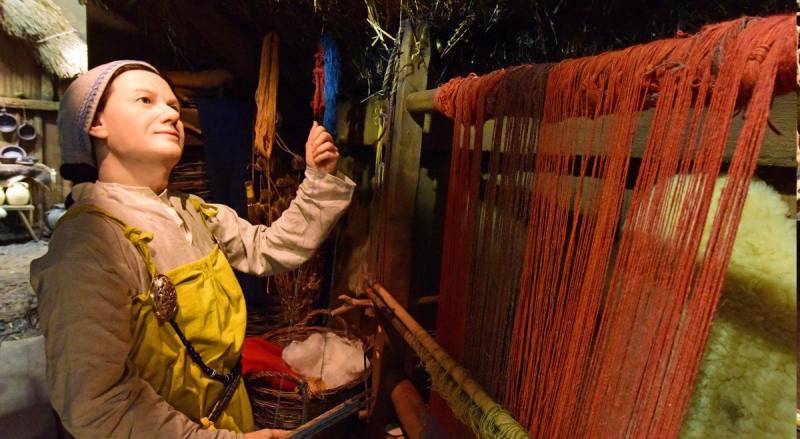 Weaver
And now we are already at the river. A Norwegian cargo ship was pulled ashore. His team unloads rolls of leather, fur, barrels of herring and takes it all to warehouses. The port of Jorvika is a transshipment point of trade in the North Sea Basin; products from all cities of Northern Europe are brought here. 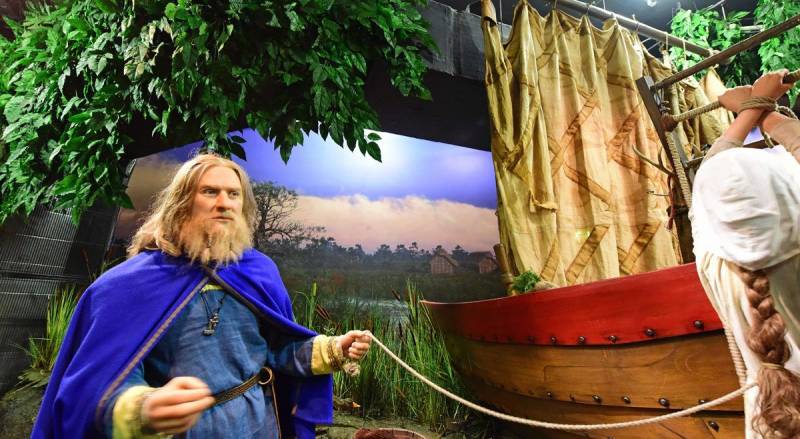 The slaver is a very honorable occupation at that time!
The smaller boat is a copy of the ancient Viking four-row boat, the fairing, which was made at the National Museum of Navigation in Greenwich. A large cargo ship is a copy of one of the five Viking ships found at the bottom of the Roskild Fjord in Denmark. It was equipped under the guidance of a recognized authority in the field of Viking shipbuilding and navigation, Dr. Alan Binza from Gull University. The sails of the ships were sewn from linen and strengthened with jute and leather - for the museum they were made by Alf Redman, a specialist in the manufacture of sails from the city of Whitby in north Yorkshire. 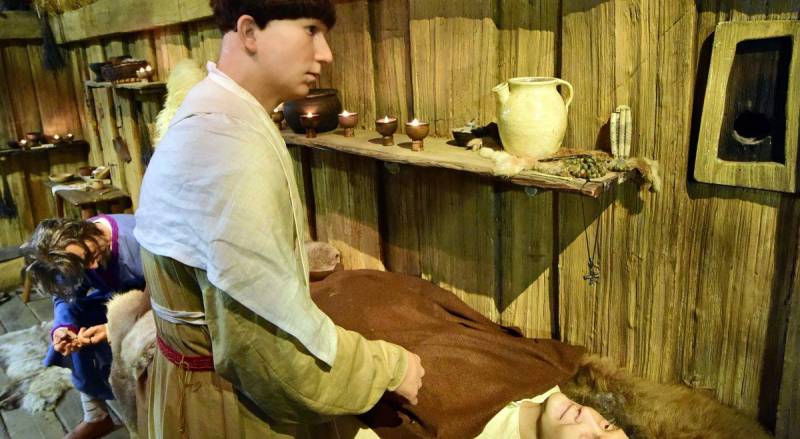 Priest. Well, where without him! Offers the dying
On the deck of the ship, sailors repair the nets that were brought here from the Gambia, no matter how hard it is to believe. The organizer of the museum, Phoebe Mac-Leod, searched the whole of England in search of natural fiber networks and only thanks to the television program about the Gambia did she manage to find exactly what she needed. 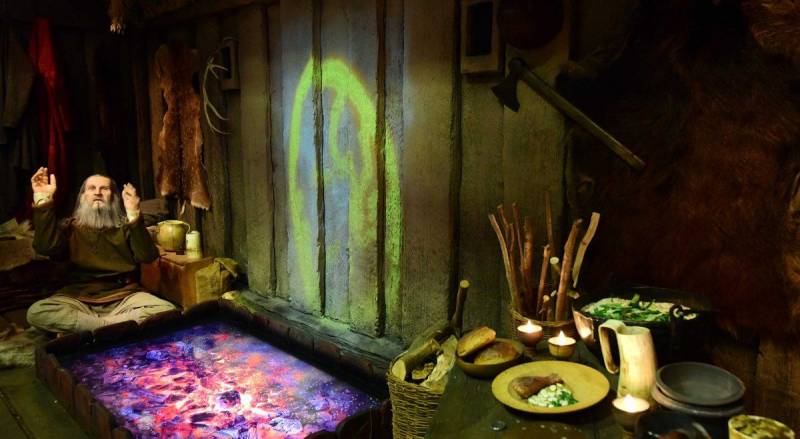 Narrator. He was also a very respected Viking man, without him a feast is not a feast!
Sailors always tell stories, and guys always love to listen to them. Here is a little boy, his mouth agape, listening to the stories of his father and grandfather. The boy’s name is Toki, this name was chosen for him by the Yorkshire guys who took part in a special contest: “What was the boy’s name?”

And now it's time to turn the time machine again: ancient Yorvik goes to bed, and you and I are transported to 1979, to the excavation site that went here from 1976 to 1981. Here, at a level of six meters below the surface, we see a picture of archaeological excavations even before the Norwegian Viking Center was created in their place. 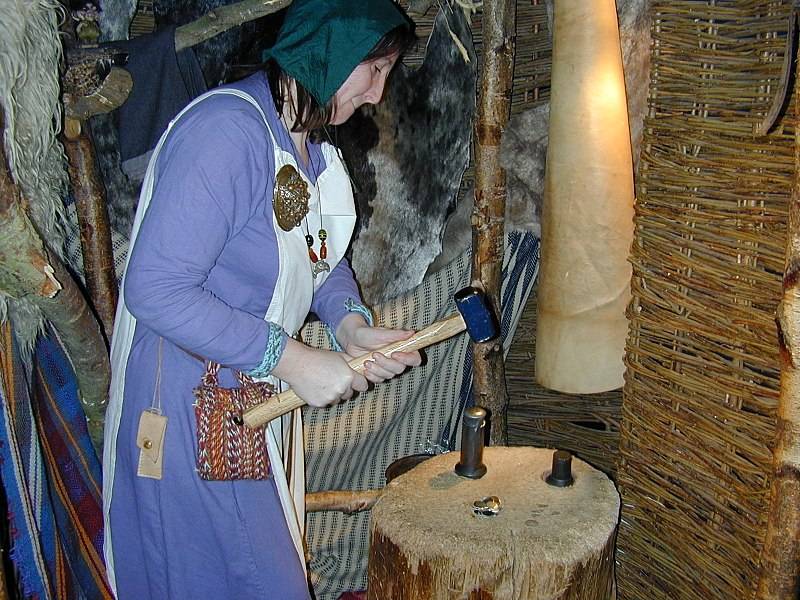 So at that time they made money. Whoever wanted as much as he did!
We see how, using special steel shields, the walls of the excavations were strengthened, as well as a small cabin in which archaeologists and workers drank tea during the break. We see the excavated remains of sheds, houses and workshops exactly in the form in which they appeared before the eyes of archaeologists after a thousand-year burial underground. Based on this irrefutable evidence, York archaeologists have recreated the ancient Coppergate Street as it was in the Viking Age. 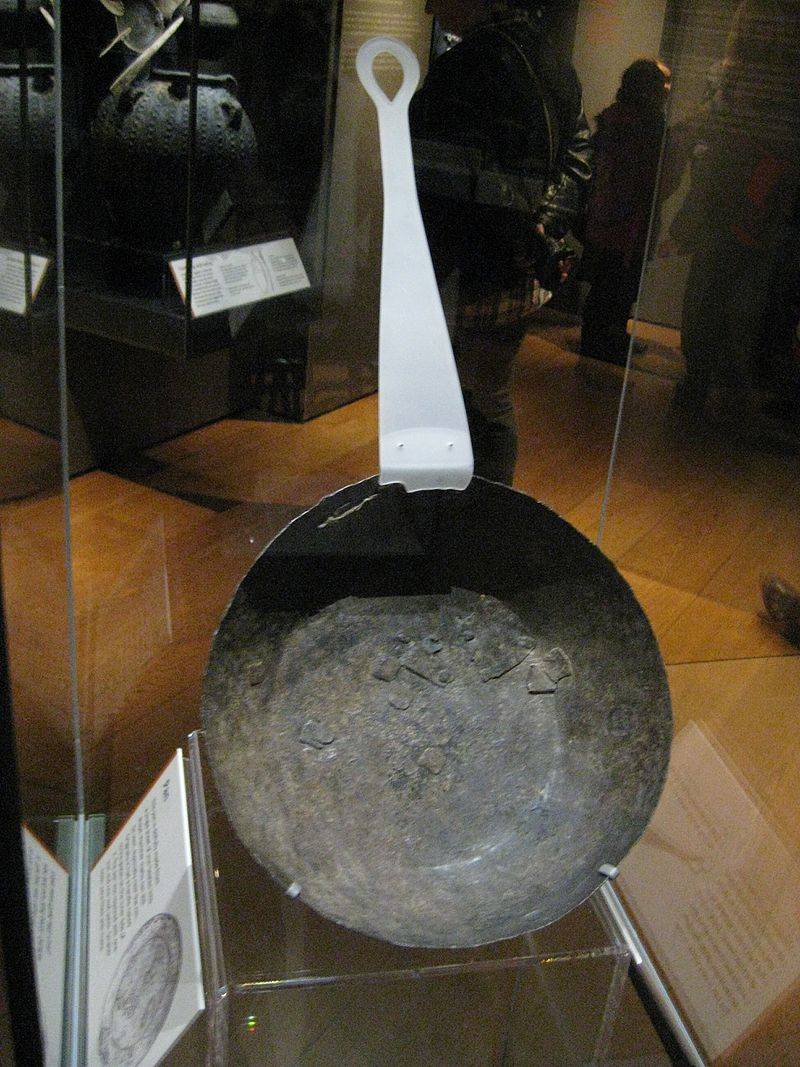 Just a frying pan
The planks and logs found during the excavation were for several months in a solution of polyethylene glycol and wax - thus they were able to be stored and put back into the places from which they were excavated. In Jorvik, in this way we can see the best Viking-era wooden structures in Europe. 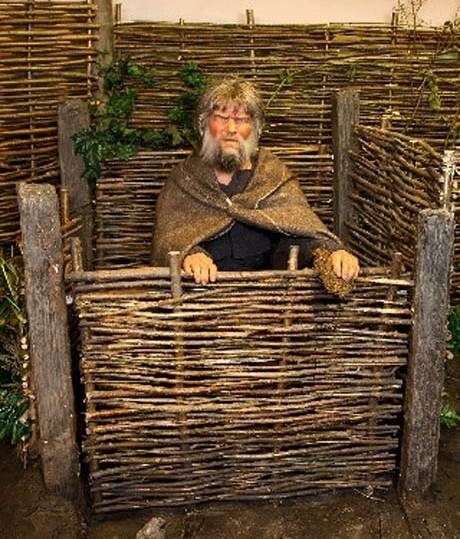 “A place for relief”
From the excavation site we will head to the room where individual finds are stored. The room is a basement of a candy factory that was once located on Coppergate Street. During the excavations, more than 35 thousand finds were discovered - all of them had to be washed, dried, marked, packed and sent for research and identification - everything from coins and jewelry to fleas, beetles and their eggs. And all this can be seen here ...

However, our time travel ended there. We managed to see the real past, recreated with the help of a beautiful illusion, the excavations themselves and all the painstaking work associated with them, and as a result, an amazing reconstruction of the long-buried past, which was discovered with the help of a shovel of archaeologists.

PS The author and the administration of the site "Military Review" thank the Directorate of the Center for the opportunity to use its photo materials.

Ctrl Enter
Noticed a mistake Highlight text and press. Ctrl + Enter
We are
Damn general. Nikolai Kamensky and his nickname SuvorovAirplane singer. Poet and aviator Vasily Kamensky
142 comments
Information
Dear reader, to leave comments on the publication, you must to register.