Eighteen days of feat. In heaven and on earth 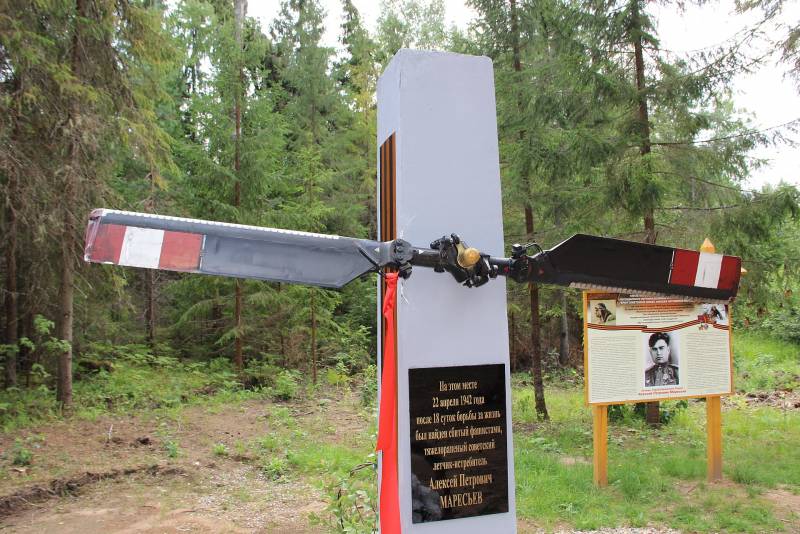 In 1967, Komsomol social activists of the Azov Optical and Mechanical Plant (AOMZ) organized a teenage youth club "Patriot" in their free time from work. At the grand opening, the Hero of the Soviet Union Alexei Petrovich Maresyev was elected honorary president of the club. 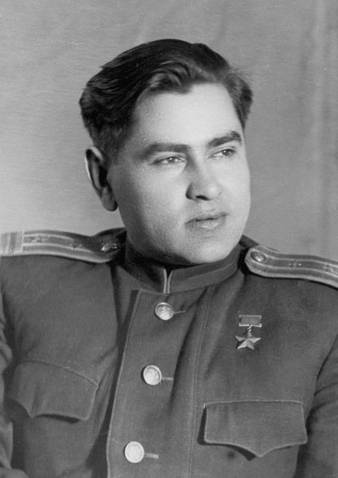 Alexey Petrovich Maresyev was born on May 20, 1916 in the city of Kamyshin. He began his career as a turner at a factory. He studied in absentia at the Moscow Aviation Institute.

In 1934, he participated in the Komsomol construction of an aircraft factory (Komsomolsk-on-Amur), where he also worked in a local flying club.

In 1937 he was called up for military service in aviation border troops of the USSR, in the Pacific border district (Sakhalin island). In 1939 he was sent to the Chita school of military pilots, which was soon transferred to the city of Bataisk, Rostov Region.

Upon completion in 1940, the Bataille Aviation School. A.K. Serova was promoted to junior lieutenant and left as an instructor. In 1941, he was mobilized from Bataysk to the front, to the 296th Fighter Aviation Regiment.

Passed the Southwest and Northwest Front.

In 1942, he was appointed flight commander of the 580th Fighter Aviation Regiment. Particularly distinguished himself and opened his battle account, shooting down 3 enemy aircraft.

April 5, 1942 during the operation "Demyansky Cauldron" (Novgorod region) in an air unequal battle with superior enemy forces, his Yak-1 plane was shot down. Having been injured, the pilot reached his front line, but when trying to make an emergency landing, he fell from a height of 30 meters in a snowy forest.

For eighteen days a pilot with broken legs crawled through the snow through the forests and swamps made his way to his. A. Maresyev, instead of water, ate snow, ate bark, cones and moss, slept in ravines, the bottom of which was lined with spruce, and he hid himself. He was noticed by residents from the village of Plav in the Valdai District, brought by cart to their house, and then sent by plane to a Moscow hospital.

Doctors saved the life of A. Maresyev, but were forced to amputate both legs. In a specialized hospital in the city of Kuibyshev, he was put on prostheses and transferred to the sanatorium named after Chkalova. There he began to stubbornly prepare to return to duty and fly.

At the beginning of 1943 he went through a medical commission and was sent to a flight school, where he made his first test flight after being wounded and got sent to the combat front. In June 1943, on the eve of the Battle of Kursk, he arrived at the 63rd Guards Fighter Aviation Regiment. After several successful sorties, paired with the squadron commander A.M. Chislov, he received well-deserved trust and the ability to go on combat missions.

In an air battle on July 19, 1943, he was shot down by a diving German bomber. The next day, July 20, in a battle with superior enemy forces, Maresyev destroyed two enemy fighters and saved the lives of two Soviet pilots.

Since October 1943, he fought as an assistant commander of the 63rd Guards Fighter Aviation Regiment, then became a navigator in the air rifle service.

The military glory of A. Maresyev spread all over the front. This strong-willed and courageous man was written in the newspapers. His name has already become famous throughout the country. Correspondents often came to the regiment.

In March 1945, A. Maresyev transferred to the post of inspector-pilot in the management of universities of the Main formation and combat training of the Red Army Air Force.

During the war, made 86 sorties, shot down 10 enemy aircraft, three before being wounded, and seven after.

In June 1942, he was awarded the Order of the Red Banner for three downed German aircraft. On August 24, 1943, for saving the life of two pilots and 3 shot down German fighters, he was awarded the title of Hero of the Soviet Union (Golden Star No. 1102).

After the war in peacetime, he went from major to the rank of colonel. In 1946, he went into reserve, took up education, graduated from the Academy of Social Sciences and the Higher Party School. He defended his thesis on stories. In the 1950s, he flew on a training aircraft as an instructor in the Air Force special schools in Moscow.

Constantly supported himself in excellent physical shape, went in for sports: bicycle, skiing, swimming. Set a personal record by crossing the Volga: 2 km 200 m in 55 minutes.

In the postwar period, the example of A. Maresyev was widely used to educate the younger generation. His feat formed the basis of the book by Boris Polevoy "The Tale of a Real Man", which was included in the course of Soviet school literature. According to the book, a film was later made.

In recent years, he worked as executive secretary of the Soviet Committee of War Veterans in the city of Moscow. He was very often invited, organized meetings with young people. Their perfect feat is forever inscribed in the history of our country.

1949 - participant in the First World Congress of Peace Supporters in Paris.

1960 - at the Bolshoi Theater, the premiere of the opera "The Tale of a Real Man" by S. S. Prokofiev took place.

1967 - participated in the ceremony of lighting the Eternal Flame at the Tomb of the Unknown Soldier.

We are in Yandex Zen
To the 75th anniversary of the Great Victory. Front Road Alexander Krestovnikov
Vladimir Khazov. Hero of battles near Olkhovatka
105 comments
Information
Dear reader, to leave comments on the publication, you must to register.