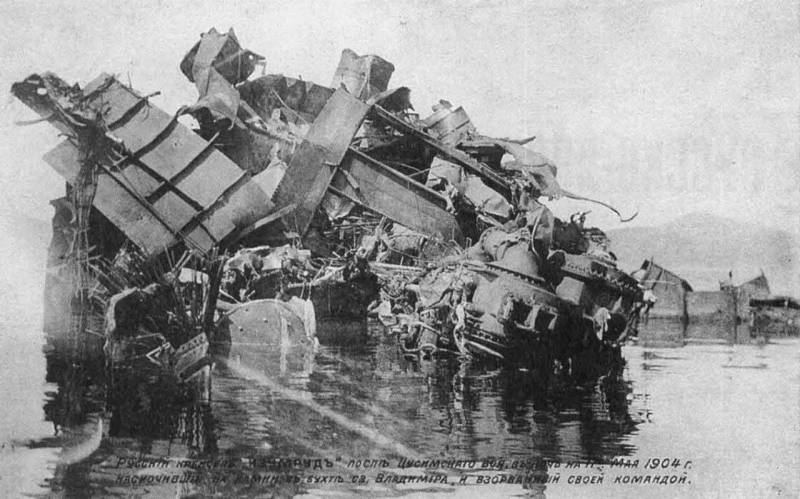 The sad ending of the actions of the commander of the cruiser "Emerald" Baron Ferzen is presented in the photo above. Briefly consider how they (cruiser and commander) came to such a life.


At 10-30 a.m. on May 15, 1905 (all dates are in the old style), commander of the remnants of the 2nd and 3rd Pacific squadrons of K.-adm. Nebogatov raised the signal for surrender, which was rehearsed by all five Russian ships. But literally immediately, the commander of the cruiser "Emerald" ordered to lower the signal "Surrender" and began to go into the gap between the enemy units. Thus, bravely violating the order of the admiral.

Here is what Ferzen himself writes in his report on this point:

"... headed for a point equally distant from Vladivostok and St. Vladimir’s Bay, decided to walk up to 50 miles from the coast and there, depending on circumstances, go either to Vladivostok or Vladimir."
As can be seen from the map, the above point was by no means at an equal distance from Vladivostok and s. Vladimir, i.e. the first was a little further than the second (modestly, 30 miles). A point that is actually located at an equal distance from the above points is indicated on the attached map by the letter "A". 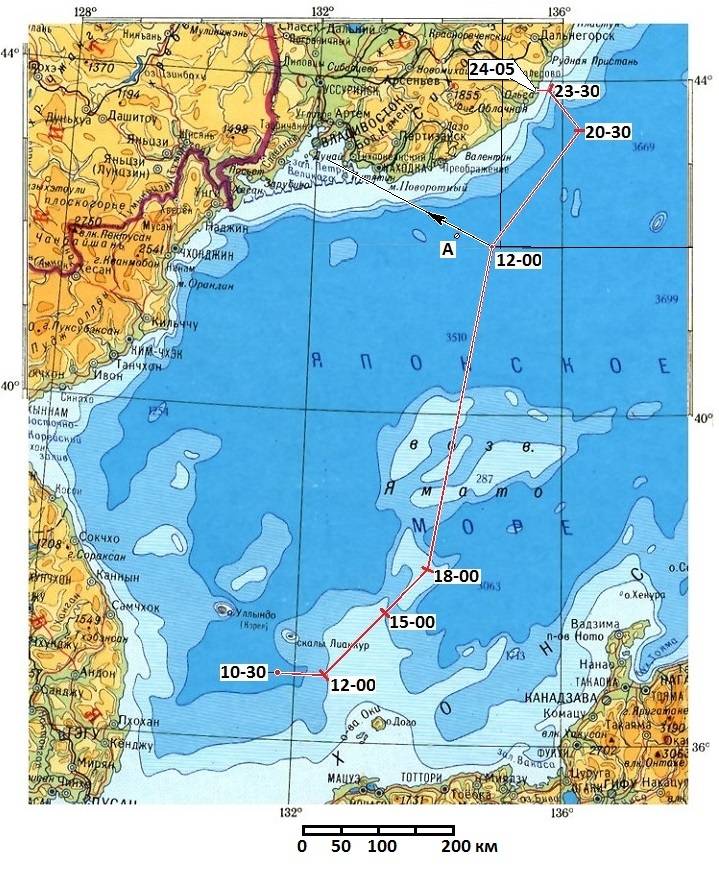 Well, I missed a little, with whom it does not happen.

Further, a curious passage from the report on the battle of Fersen:

"At this point, it was necessary to decide where to go: to Vladivostok or Vladimir. I chose Vladimir, not Olga."
Wait, wait, Mr. Fersen, what does Olga have to do with it ?! It seems he chose between Vladivostok and Vladimir? Where did Vladivostok go? And in the quote above were Vladivostok and the bay of St. Vladimir. So easily Fersen Occam's razor cut off everything unnecessary.

Now imagine that in 1941 the commander, having received the order to take up defense at the Dubosekovo junction, judged that it was better to do this in Khamovniki, and eventually dug in a bar on Tverskaya. For this he would have been immediately shot at the verdict of the tribunal before the formation.

Therefore, the country in 1945 signed the surrender of the enemy in Berlin, and another country instead of peace in Tokyo signed its half-capitulation in Portsmouth.

But maybe Vladivostok is one of many fallback options? No, it was to go to Vladivostok that was the order of the commander of the adm. Christmas. That is, Ferzen easily and undoubtedly bravely violated the order of his superior for the second time. No wonder all the same he was given the golden weapon with the inscription "For courage". It was impossible to take away courage, it was only expressed in violation of orders.

It is clear that the order of Nebogatov was illegal, and Ferzen did the right thing that violated it, so there was a formal reason for the award. But why does this relate to courage, and not to knowing the charter and the determination not to obey an illegal order? Maximum draws on written encouragement from the authorities. Or a political decision to award, as was the case with Rudnev.

It is clear that in that war there were very few successes in the battle, but to reward for escaping from the battlefield when superiority in speed was used (and even without a single shot), somehow too much, given the subsequent cowardly undermining of the cruiser ...

Again, I quote the report on Fersen’s fight:

"Assuming that the currently free 6 cruisers who cut the course line of our detachment were immediately sent to look for me on the way to Vladivostok ..."
That is, Fersen assumed that the Japanese would catch him on the way to Vladivostok, and here the point where the cruiser arrived at 12:00 p.m. on May 16 has greater benefits compared to the equidistant point, if, of course, you obey the order and go to Vladivostok. The distance to the latter in a straight line is slightly less than 150 miles (on the map the direction is a black arrow and a line of the same color). The distance from the line of possible Japanese patrolling to Vladivostok is about 60 miles (assuming that the Russians will be caught at the entrance to St. Peter the Great, along the line of metro station Povorotny - metro Gamova).

Moreover, the patrol line is about 150 km, and the Japanese have chances only in the afternoon. At night, to catch a single cruiser is extremely unlikely, and if it is also faster (theoretically), then the chances are directly approaching zero.

Thus, the Emerald would need to cover 90 miles in 10 hours to cross the patrol line in the dark (including the approach to it in the dark), that is, leaving at 12 pm, the cruiser passes traverse at 22-00 m. Pivoting and further goes slowly to Vladivostok under cover of darkness. Miles 50 to the port “Emerald” communicate with Vladivostok on the radio and finds out the location of the passages in the minefields (in reality, minefields were only near the port, and the cruiser would calmly follow almost to the port entrance).

Now let's see the presence of coal on the cruiser at the point where the Emerald arrived at noon on May 16th.

Quoting Ferzen:
"... 60–70 tons of coal remains to only reach the port."
At the same time, the distance covered before landing aground is equal to the distance to Vladivostok: Ferzen chose the path not directly, but along the coast, with subsequent rotation on a perpendicular to the coast (see the attached map). And after landing aground, about 10 tons of coal remained. That is, there was enough fuel to reach Vladivostok, all the more so since the transition to the last one was required at 9 knots, and the Emerald went to Vladimir at a speed of 13 knots, which caused an increased consumption of coal. And even if the coal ran out, it would have happened at the port itself with its bookkeepers and other things (combat cover of BrK and batteries).

Thus, Fersen had everything: the right location, and coal in sufficient quantity, there was just no courage, or, more likely, sanity.

I would like to recall the opposite example - the commander of the Almaz yacht Chagin, who, being in a sober mind, without any panic, not afraid of minefields and mythical Japanese cruisers, calmly reached Vladivostok, following the order on his unarmored, slightly armed and not very strong high-speed yacht cruiser. At the same time, “Almaz” on May 14 all the time participated in the battle of light forces (unlike the “Emerald”) - and nothing, Chagin’s head was in order. He was awarded the Order of St. George, 4th degree.

And in conclusion, I’ll give a diagram attached to the report on Fersen’s battle. Who in the subject, he will appreciate the humor. 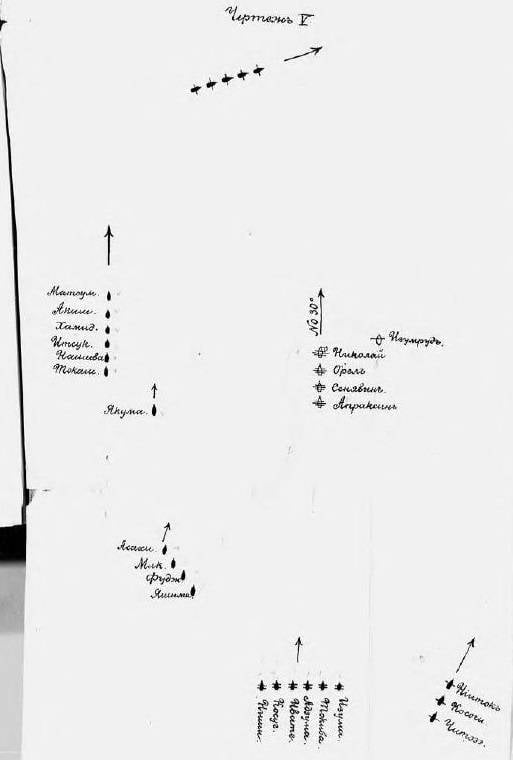 Ctrl Enter
Noticed a mistake Highlight text and press. Ctrl + Enter
We are
5-I operational. Interview of Admiral Retired Selivanova Valentin EgorovichWhat you didn't want to know about England
86 comments
Information
Dear reader, to leave comments on the publication, you must to register.