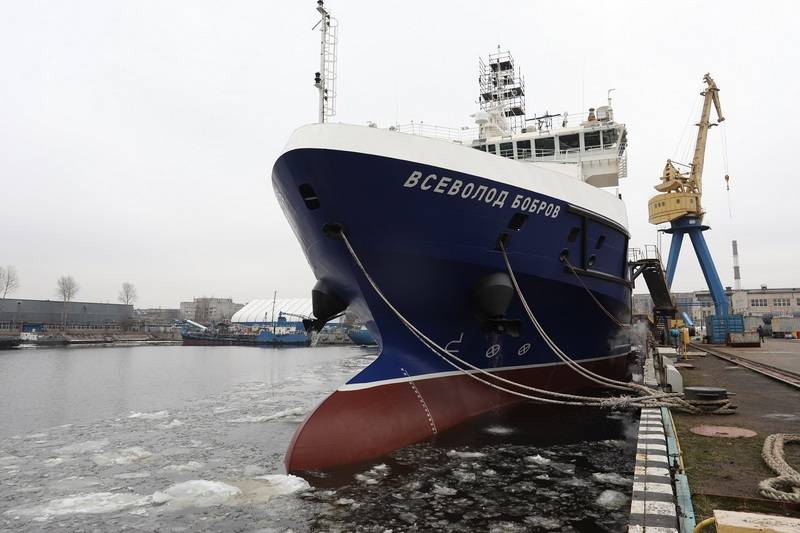 The first serial logistics support vessel Vsevolod Bobrov of project 23120 continues to undergo mooring tests at the construction wall of the Severnaya Verf shipyard. This was reported by the press service of the enterprise.


Over the course of April, the autonomous operation of all diesel generators was checked on board, tests of rescue and rescue boats were conducted, and their running and maneuverability were tested. In May, Vsevolod Bobrov plans to complete testing of hydraulic cranes and anchor devices.

At the end of October last year at the Northern Shipyard, they announced the preparation of the vessel for the introduction of the crew.

At the moment, nothing is reported about the beginning of factory sea trials, and the timing of the transfer of the vessel to the Naval fleet.

The ship is intended for the transport of goods, towing, hydrographic surveys, assistance to ships in distress. The dynamic positioning system allows you to hold the ship at a given point in any weather conditions. The ship has two electro-hydraulic cranes with a lifting capacity of 50 tons, towing winches with a pulling force of 120 and 25 tons, there is a cargo deck with an area of ​​more than 700 square meters. m. Unlike the lead ship, the deck is strengthened on Bobrov, the ship will be equipped with additional devices, including a grab for loading bulk cargo.

We are in Yandex Zen
Logistics support vessel Vsevolod Bobrov is preparing for the introduction of the crew
GCC "Northern Shipyard" completes the vessel "Vsevolod Bobrov." When in operation?
13 comments
Information
Dear reader, to leave comments on the publication, you must to register.