Nord Stream 2 has new problems due to old Russian “friends” 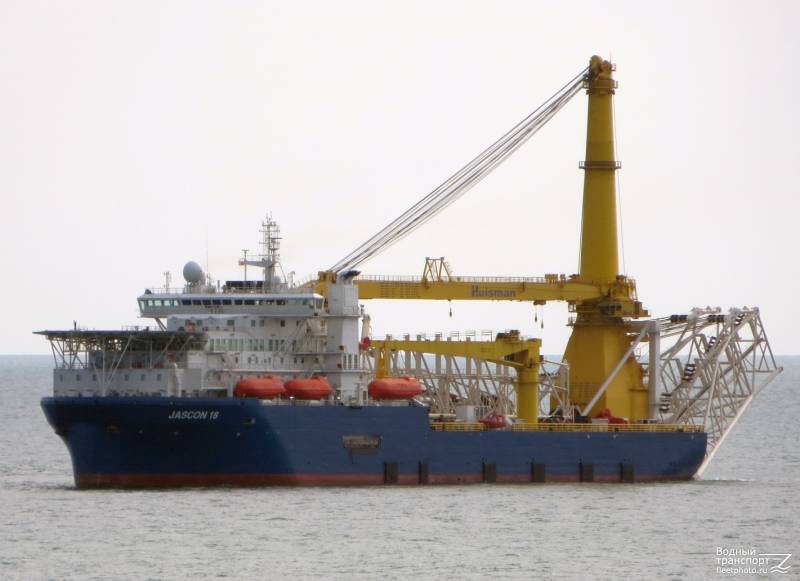 
While the whole world is struggling with the coronavirus pandemic, some countries find for themselves a completely different source of global problems and declare their intentions to confront it, sparing no effort and resources. Over the most important domestic energy project, the Nord Stream-2 gas pipeline, the construction of which has recently turned into a real epic, clouds are gathering again.

The fact that Kiev "will make an absolute maximum effort" to ensure that the gas pipeline was never completed at all, since this project is "clearly political" and in addition "runs counter to the principles of European solidarity," said the other day the head of the Ukrainian gas transportation company systems Sergey Makogon. However, having finished with declarations obligatory in such cases, this figure directly pointed out the true reasons for the voiced aggressive intentions. According to him, Ukraine, which lost 15 billion cubic meters of annual transit as a result of the launch of the first line of the Turkish Stream, will lose everything after putting Nord Stream-2 into operation.

Kiev is well aware that, having implemented this project, Moscow will by no means fulfill its explicit extortion requirements, being no longer bound by obligations to its European partners, which it will be able to fulfill without involving the Ukrainian “pipe”. It is true, what methods and methods the “non-fallow” intends to achieve the disruption of construction, Pan Makogon did not specify. It was not for nothing that subsequently in the State Duma of Russia his demarche was called “hysteria”, the essence of which, by the way, contradicts primarily the interests of European consumers of Russian “blue fuel”.

The plans and claims of Warsaw, which synchronously with Kiev “attacked” the gas pipeline, are much more specific. So, the Deputy Minister of State Assets of Poland, Janusz Kowalski, said that the local energy company PGNiG, which allegedly won a lawsuit against the Russian RAO Gazprom under the so-called Yamal contract in the Stockholm arbitration, intends to seize the amount due to it (about $ 1,5 billion) assets of Nord Stream and Nord Stream-2. This, according to the Polish official, “will certainly slow down the completion of construction,” which, without a doubt, will greatly please official Warsaw, which is obviously firmly set to completely ruin relations with Moscow.

In turn, the press service of the pipeline construction operator, Nord Stream 2 AG, said that they had absolutely no idea about any lawsuits that could be related to its assets, and therefore affect the timing of the project . Moreover, the company does not show the slightest doubt that the gas pipeline will be completed earlier than planned, naturally, with some correction for the current emergency situations in the world in connection with the COVID-19 pandemic. Be that as it may, the work is planned to be completed before the end of this year, with a maximum in the first quarter of next. This information was recently confirmed by Rainer Seele, head of the Austrian energy corporation OMV, which is one of the investors in the project.

Nord Stream 2 is in reality nearing its successful conclusion. In fact, it remains to finish building about 50 kilometers of one of its “strings” and 70 - the second. If it were not for the sanctions imposed by the United States against companies owning pipe-laying vessels, this would most likely have already been done. However, the domestic ship of the corresponding class, the Academician Chersky, which is quite capable of “playing the final chord” in the protracted construction, is approaching every day the place where it is most needed now. Domestic experts explain the unpredictable maneuvers and changes in the course of this ship, which are not quite understandable to the majority of uninitiated citizens, quite simply: moving in this way, it tries to avoid the sanctions of the US regulators, which complicate their passage through the straits. As far as we know today, Kaliningrad has been declared the next destination of Academician Chersky. Nevertheless, with each mile traveled, he approaches the waters of the Baltic, in which he has to fulfill his most important mission.

"Nord Stream-2" will be completed, despite all the attempts of ill-wishers. It is necessary not only to Russia, but primarily to Europe itself. The fact that they perfectly understand this is evidenced by the following fact: according to RAO Gazprom, only in April of this year, Nord Stream 2 AG raised 87 and a half million euros of loan funds from European partners. You can be sure: in the current difficult crisis time, fisted Europeans would by no means invest such funds in a project in the implementation of which they would have at least the slightest doubt.

Ctrl Enter
Noticed a mistake Highlight text and press. Ctrl + Enter
We are
Coronavirus COVID-19: threats, consequences, actionsSituational analysis of the death of the MH17 flight (Malaysian Boeing 777), made on the basis of engineering analysis from 15.08.2014
143 comments
Information
Dear reader, to leave comments on the publication, you must to register.