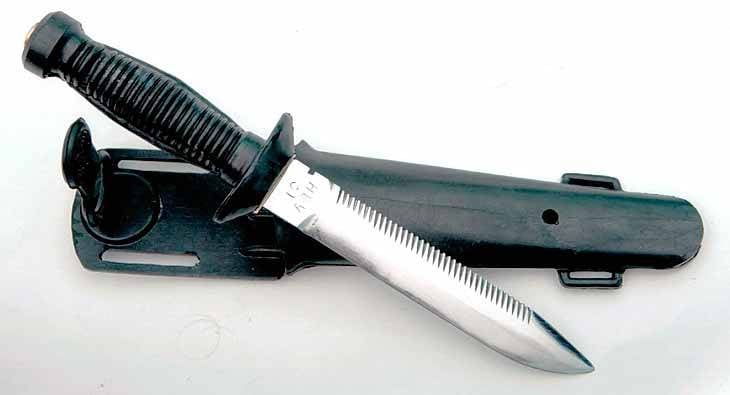 In service and supply of various units and parts of the naval fleet Russia consists of a number of knives for various purposes. Knives of various types can be used by combat swimmers, crews of ships or military personnel of coastal units. Depending on the challenges, such products help to engage in hand-to-hand combat or perform various tasks. Consider the most interesting examples of naval knives.

One of the main users of various knives in the Navy is the diving unit. In the past, various options for working knives were developed specifically for them, including with the possibility of use as weapons. At the end of the seventies another example of this kind was the "Universal Diving Knife" NVU. Despite the appearance of new products, NVU still remains in operation.

НВУ has a total length of 320 mm with a blade length of 164 mm. The blade is made of stainless steel or non-magnetic metal (modification NVU-AM). One and a half sharpening is used, forming a pointed combat end for delivering piercing strikes. Most of the butt is occupied by the serrator (absent on NVU-AM). The plastic mounted handle has a spindle shape with annular protrusions for ease of retention. A cross is provided to protect the hand. A handle has been embedded in the handle for use as a hammer.

The universal knife is equipped with plastic sheaths with a retaining rubber ring. The scabbard has a two-point mount to the diver's equipment.

NVU product quickly enough became a common working tool among divers. With its help, it was possible to cut or saw various materials, as well as to apply stabbing or crushing blows. For the same reasons, the knife was appreciated by combat swimmers.

Further development of the concept of a multi-purpose working knife can be considered a “diving knife” developed by KAMPO JSC, which was accepted for supply several years ago. This product is designed to carry out a variety of work and has enhanced functionality. It is also possible to use HB for self-defense. 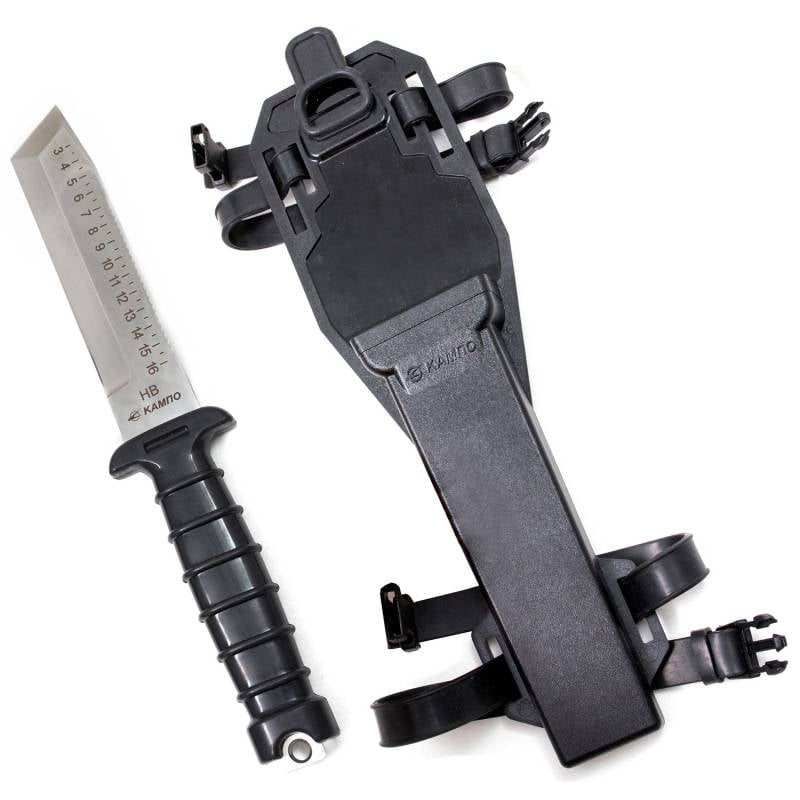 Modern knife HB. Photo KAMPO / kampo.ru
In terms of dimensions, HB is similar to NVU, but differs in the size and proportions of the blade. The blade made of steel 100X13M or 95X18 has a characteristic shortened tip with one and a half sharpening. A long serreytor sharpening is provided for the butt. The side surface of the knife carries a ruler for quick measurement of objects. The blade connects to the rider's plastic handle, made at the same time with the cross. A block with a hole for a safety cable has been installed as a pommel - it is proposed to use it as a hammer.

The sheath for KAMPO NV is similar to the product for NVU, but have a different shape and are made of different plastic. At the same time, a two-point suspension to the diver’s equipment and a loop holding the knife handle are preserved.

For carrying out rigging and other work in the fleet, the so-called boatswain knives - in the past they were two-tool items with a blade for cutting objects and piles for working with ropes and cables. Now a new version of such a product, “Universal Marine Knife” from KAMPO, has been developed and is being prepared for production. 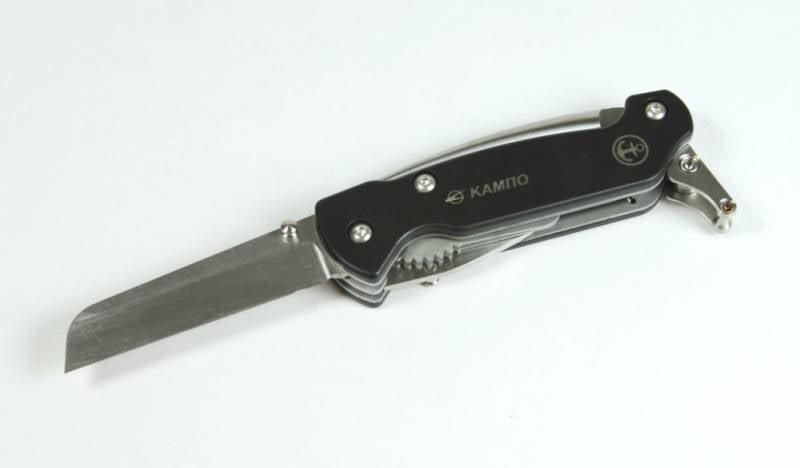 Adopted by NMU. Photo KAMPO / kampo.ru
NMU is folding and includes three items. Long and short blades of various configurations are fastened on one side of the handle. The short blade is equipped with a stripper for cutting the cable. At the top is a folding pile for working with ropes. In terms of functions and tasks, NMU is similar to old boatswain knives, but differs in modern design and improved ergonomics.

A few days ago, the Ministry of Defense announced the implementation of measures to adopt the NMU into the arsenal of the Navy. By the end of the year, the product will be accepted and put into series.

As a universal tool for combat and for work, combat swimmers used NVU knives. Subsequently, several specialized designs appeared with characteristic features. One of these products was the Murena combat knife, developed by SARO by order of the Navy in order to equip anti-sabotage forces and equipment units (PDSS). 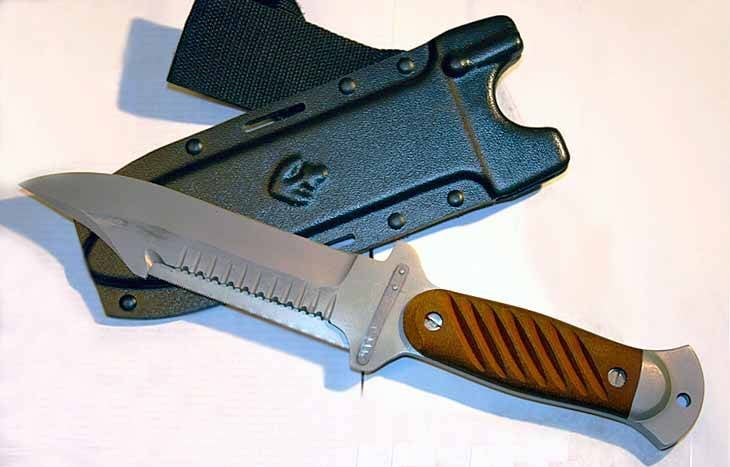 Moray eel knife with an established hacksaw blade. Photo Zonwar.ru
The tactical and technical task for the future "Murena" was particularly difficult. The customer required to provide both cutting soft objects and sawing hard. A knife with equal efficiency had to cope with ropes, algae, nets and metal up to 15 mm thick. Such a combination of characteristics in one blade turned out to be impossible, as a result of which an unusual design was proposed.

The Mureny blade is made of steel 65X13 and has a point with a bevel and one and a half sharpening. There is a long notch in the butt. On its surface there is a serrator with a large tooth, as well as a longitudinal groove. An additional hacksaw blade for cutting metal objects is installed in the groove. The handle is made in the form of a pair of linings on the shank. The spider is part of the blade strip. The knife is equipped with plastic sheaths with a textile loop securing the handle.

According to well-known data, Murena reached the series and was limitedly supplied to the relevant units of the Navy. The real effectiveness of the main design solutions was not reported. At the same time, the composite design of the multifunctional blade caused controversy among cold steel lovers.

The Needle and its sheath

According to well-known data, the PDSS also has the Igla combat knife developed by the Melita-K enterprise. The knife and its sheath are a complete complex designed to solve all the basic tasks of cutting or chopping various materials. 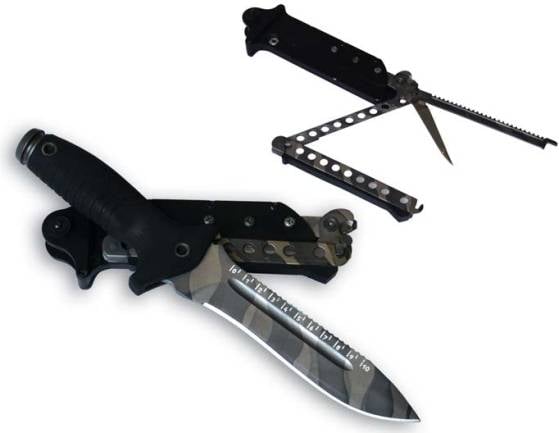 The Needle and its sheath. Photo "Melita-K" / melitak.ru
Actually, the Igla knife is a 319 mm product with a 173 mm stainless steel blade; different grades are used. A pointed war end with one and a half sharpening is provided. The butt is equipped with a serrator and a 10-cm ruler. Near the crosspiece there is a recess for breaking the wire. The handle is a plastic horseman with a metal top.

The sheath is made in the form of a plastic cover with metal parts mounted on it. The sheath has a folding awl, nippers with relatively long handles, a combined hacksaw for wood and metal, and a screwdriver. The sheath with the tool is placed in a textile cover for suspension to equipment. 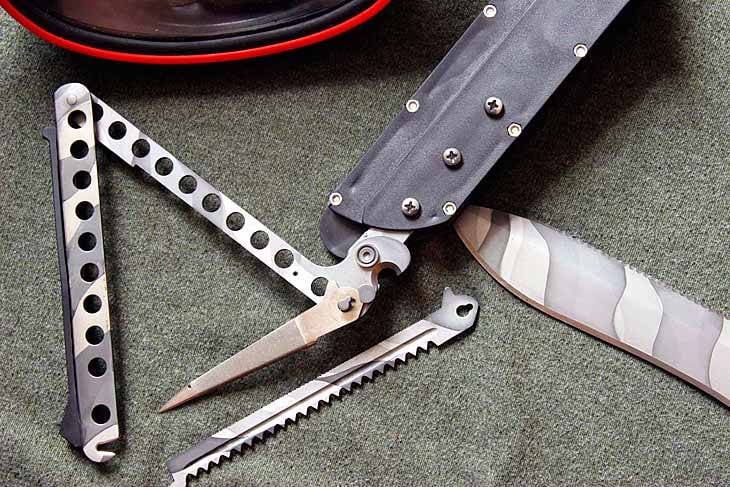 Needle tools close-up. Photo "Melita-K" / melitak.ru
The Needle product demonstrates an integrated approach to the design of combat knives. The main required functions are implemented within the knife itself. Other features that are not available for a simple blade are provided with a sheath of a special design.

The development of combat and working knives for the Navy has been going on for more than a dozen years and has led to the emergence of a number of different models. At different times, universal and specialized models were offered and put into service for divers and combat swimmers, as well as for crews of ships and fighters of coastal units. Some samples were used only in some circles, while others were more widely used.

As a result, in the XNUMXth century, naval knives have come a long way from the simplest designs made of old materials to complex multi-object and multifunctional devices with the broadest possibilities, made of modern alloys and plastics. The last steps in this direction can be observed right now in fresh the news... At the same time, it can be assumed that even more advanced designs will appear in the future. Thanks to this, the fleet will not be left without knives - the most important tools that remain invisible against the background of ships.

Ctrl Enter
Noticed a mistake Highlight text and press. Ctrl + Enter
We are
What is interesting knife for the fleet of NMULight forces of the Navy. Their significance, tasks and ship composition
24 comments
Information
Dear reader, to leave comments on the publication, you must to register.