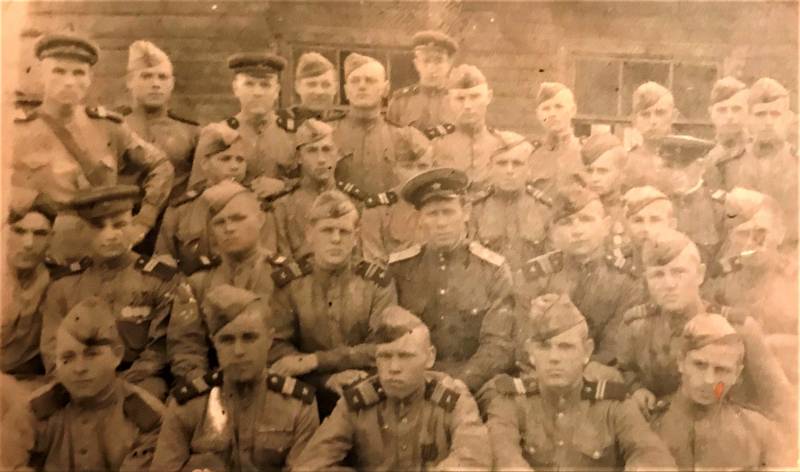 Fought all who could and managed

The Great Patriotic War left an indelible mark on our family. My father, wife’s grandfather and my aunt, my father’s sister, fought with us. Mom, then Valentina Vasilyevna Polevova, worked as a 14-year-old teenager for 12 hours at a military factory, she made boxes for shells. My father, Vladimir Lepilin, was born in Moscow in 1925.

His parents were Dmitry Matveyevich Lepilin and Stepanida Andreevna Kondratieva, immigrants from peasants of the Ryazan province. Vladimir was the youngest child in the family. He had two sisters - Anna and Antonina. 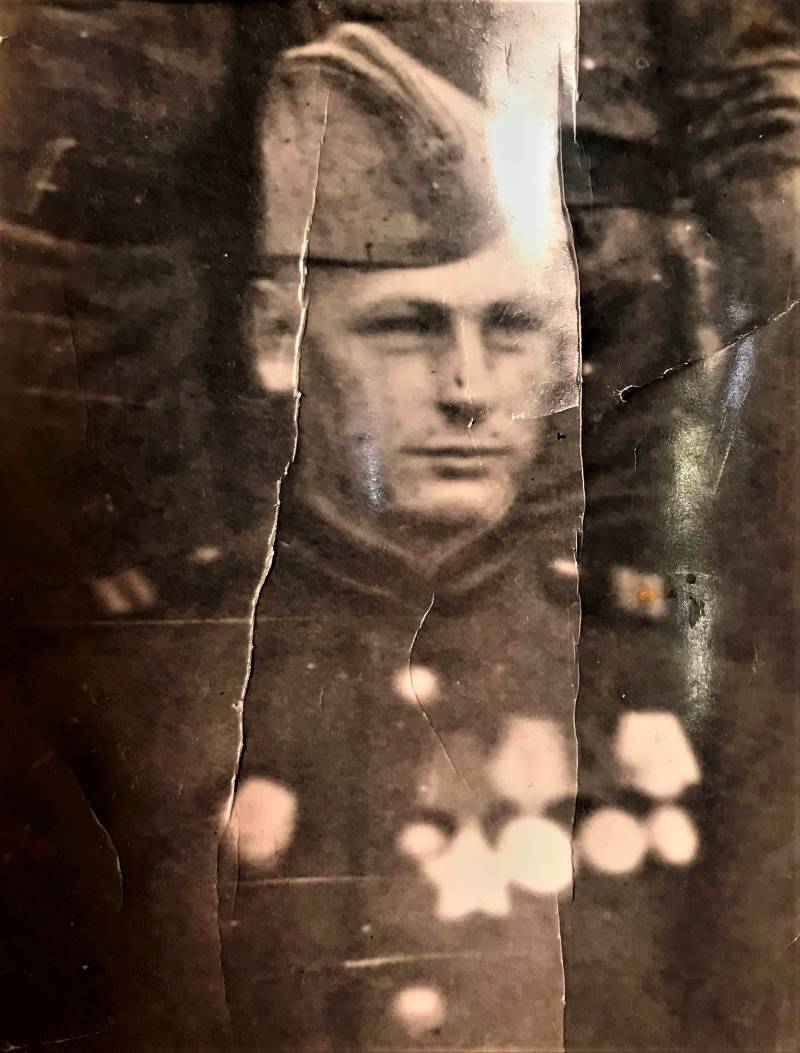 The family settled in Moscow before the birth of a son. My father went to war at the age of 17 - attributed to his age a year, which was then done by so many. Drafted in Izmaylov, in the then Stalin District Military Commissariat. From January to May 1943 he was trained in a separate reserve combat engineer battalion and from May 1943 to August 1945 he fought as a combat engineer.

Vladimir Dmitrievich served in a special unit (178th separate motorized engineering battalion. - Auth.) Of the 4th Guards Rifle Corps, which was part of the Central, and then the 1st Belorussian and 2nd Belorussian fronts. Father ended the war in the 2nd Shock Army already as part of the 41st Red Banner Motor Engineering Order of the Suvorov Brigade of the High Command Reserve, which was sent to East Prussia.

He told us a lot about how, at the risk of his life, he crawled along a neutral strip, set and removed minefields. He also recalled his military adventures as a messenger, when he almost face to face with the Nazis. About how he loved to sing with colleagues between fights.

And sometimes he remembered how the soldiers, sensing danger, thought that they might die. So, alas, it happened to many of his comrades. But his father was probably lucky, and during the whole war he received only one slight wound. His mother, Stepanida Andreyevna, during the war received several letters of thanks from the commanders of the unit in which her father served. Here is just one of them. 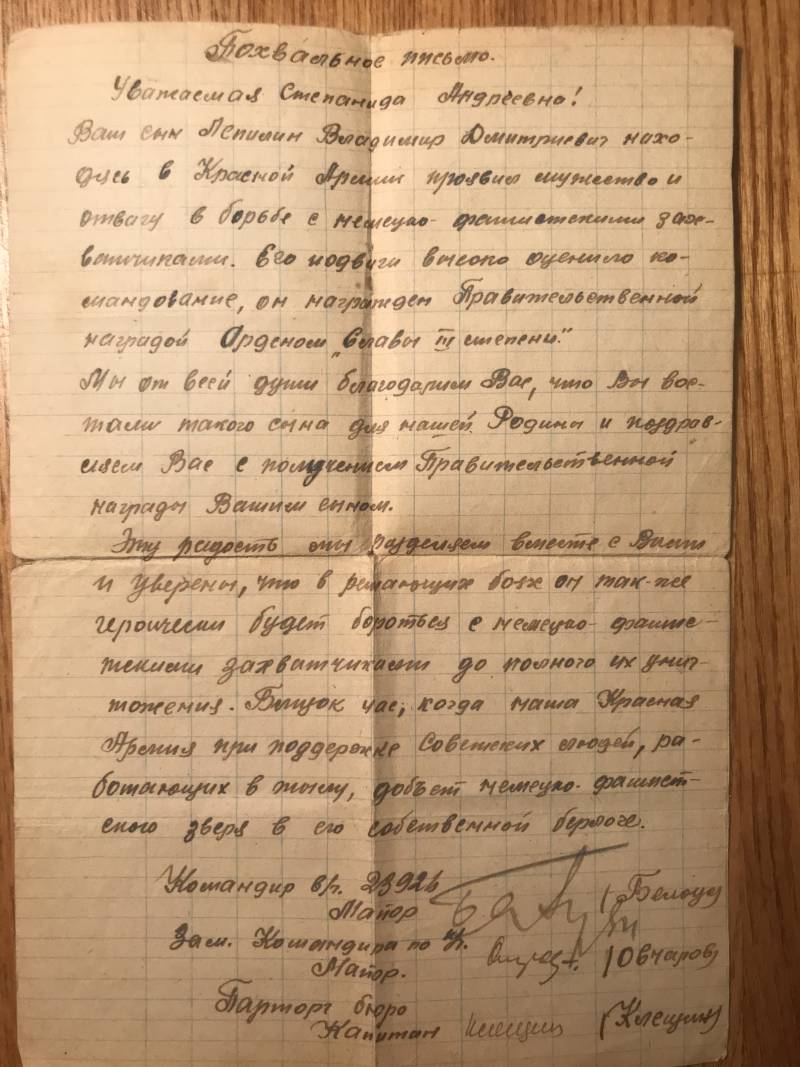 Vladimir Dmitrievich - Knight of the Order of Glory III degree. His award sheet is written quite enough to once again understand: such awards were simply not given to anyone. It is no accident that the soldiers immediately equated the "Glory" with the St. George Cross.

"The Red Armyman Lepilin V.D. particularly distinguished himself in carrying out a combat mission to mine the front edge of our defense on the left bank of the river. Vistula In a difficult combat situation, under enemy fire in the neutral zone, in two nights, he installed 25 pieces of anti-tank mines.

During the advance of our units under strong gun, machine-gun and mortar fire of the enemy comrade Lepilin V.D. moved and installed 100 pcs. anti-tank mines, and also he made two passes in minefields. These passageways provided an exit tanks and artillery on with. Dombruvki. The village of Dombruvka was taken by our troops.

I am applying for the award of the Red Armyman Lepilin V.D. Order of Glory III degree.

The commander of the battalion Major Belous, chief of staff of Art. Lieutenant Metelkov. "
Also, his father was awarded the medal "For Courage", which was especially respected among the soldiers and sergeants, since junior commanders who fought alongside them could also represent her. We found on the site “Feat of the People” an award sheet, which here also cannot be cited:

“Corporal Lepilin was especially distinguished when escorting self-propelled artillery on the outskirts of Gdynia. Our self-propelled guns were blocked by the anti-tank barrier, approaches to which were shot by the machine-gun fire of the enemy At the risk of life, acting decisively and boldly, Corporal Lepilin carried away a group of fighters and, under the machine-gun fire of the assault (enemy. - Auth.), Blew up the anti-tank a barrier, which contributed to the successful promotion of self-propelled guns in the city of Gdynia. ”
In January 1945, his father liberated Warsaw, for which he also received a military medal. 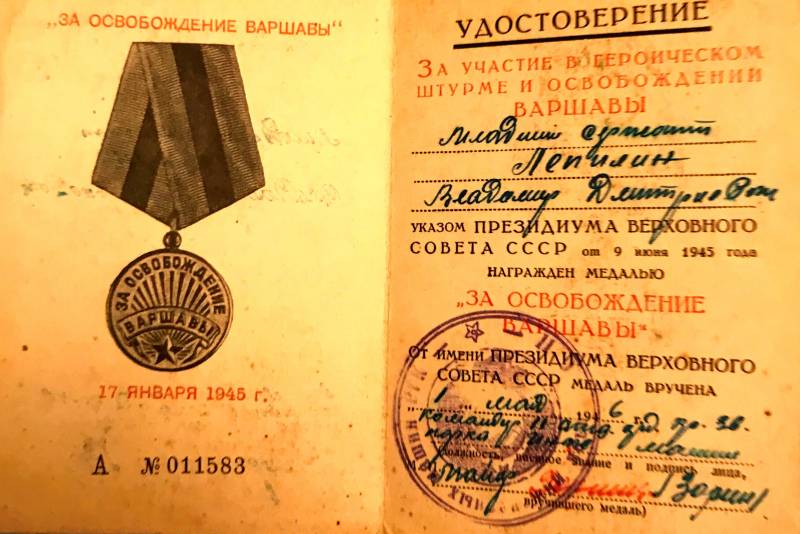 Minesweeper Vladimir Lepilin reached Königsberg, where he ended the war with the rank of junior sergeant. For exemplary military service, courage and heroism shown in battles with the Nazis, he was sent to Moscow to participate in the 1945 Victory Parade. In frames historical chronicles can also be seen in my father marching on Red Square on June 24, 1945.

His older sister, Lepilina Antonina Dmitrievna, also fought, served as a technician in the famous women's bomber regiment under the command of Marina Raskova. At first he was just a number one - 587th, and later, when the regiment commander tragically died along with the crew, bore her name and became the 125th Guards Dive-Bomber Regiment.

The regiment was part of the 4th Bomber Division of the Borisov, Guards and Red Banner, which bombed the fascist rear and positions from Smolensk to Königsberg. Somewhere there, they probably could have met with their brother, but, unfortunately, no information or memories about this remained in the family.

Vladimir Dmitrievich finished his service in 1947, from sappers he was transferred to artillery. True, he only reached the deputy commander of the guns of the artillery brigade. He was the gunner of 85 mm guns and 152 mm howitzers. After the war, my father worked at the Salyut military aircraft factory as a fashion designer.

Unlike his younger brother, Antonin Lepilin went through almost the entire war. At the airfields, which the regiment was supposed to change almost constantly, she fixed the planes of our illustrious pilots and attached heavy bombs to them. 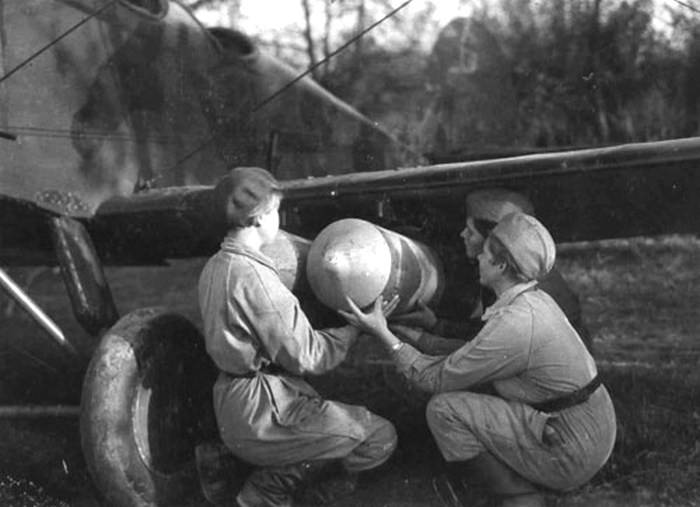 Antonina Dmitrievna ended the war with the rank of guard of the sergeant of the technical service. She was awarded the Order of the Red Banner, medals "For Military Merit" and "For the Defense of the Caucasus." On the occasion of the 40th anniversary of the victory, she also received the Order of the Patriotic War of the II degree. 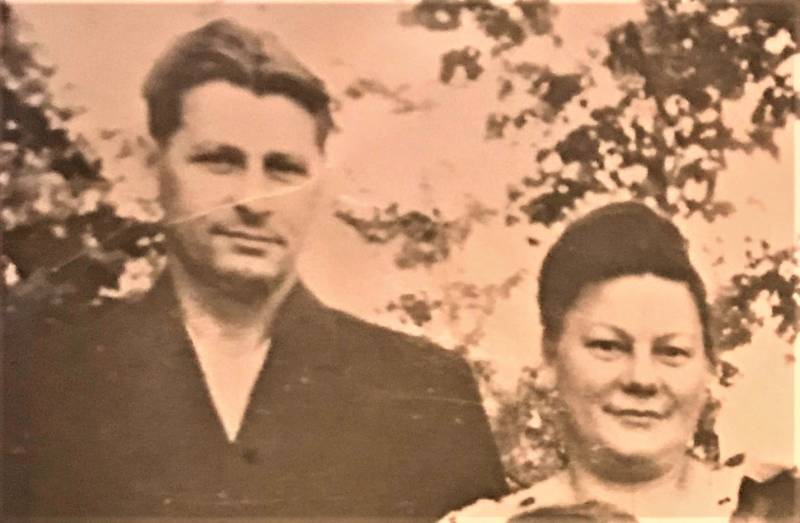 Vladimir Dmitrievich and Antonina Dmitrievna Lepilins, 1963, the city of Narofominsk
My sons and I will always remember the military exploits of my father, his sister, participants in the Great Patriotic War, the labor exploits of my mother, a participant in the labor front, and be proud of their contribution to our Great Victory.

Author:
Sergey Lepilin, Art. Lecturer at the University of Geology
Photos used:
from the family archive

Ctrl Enter
Noticed a mistake Highlight text and press. Ctrl + Enter
We are
What people keep in memory of the warThank you for being born!
12 comments
Ad