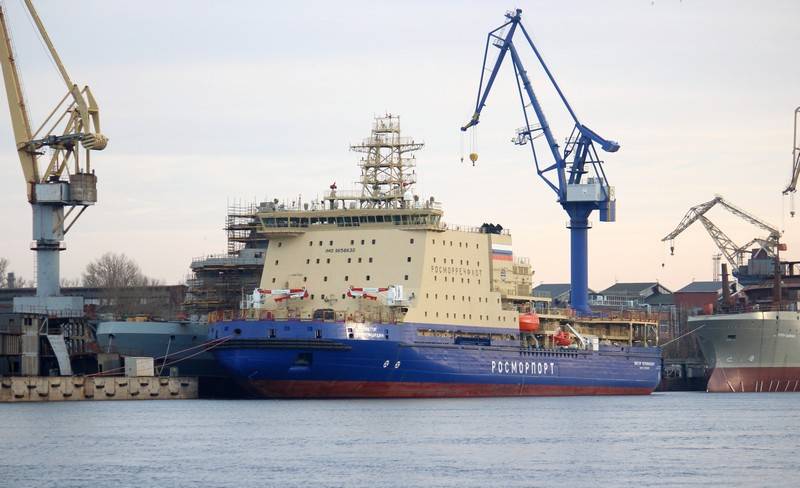 The world's most powerful diesel-electric icebreaker Viktor Chernomyrdin will probably be commissioned by September this year. As reported "Businessman" citing own sources, the issue of additional financing and a shift in the deadlines for the delivery of the vessel has finally been resolved.


According to the publication, the Ministry of Transport and the Ministry of Industry and Trade have resolved all disagreements about the increase in the cost of building the Viktor Chernomyrdin icebreaker. The ministries will allocate 1 billion rubles for the project, and another 1,5 billion for the icebreaker will be allocated by USC.

The fact that the cost of building an icebreaker, originally announced at 8 billion rubles, increased to 11 billion, it became known back in 2017. The reason for this was the exchange rate difference, as well as repeatedly introduced changes to the project, however, the icebreaker customer Rosmorport did not agree with the increase in costs. Now it is reported that all expenses have been agreed.

According to the source of the publication, the icebreaker, at best, will be delivered to the customer by September, because the preparation of the necessary documents will take a very long time.

At the end of December last year, it was reported that the Viktor Chernomyrdin icebreaker was technically ready, the crew was formed, the ship passed all the necessary mooring and sea trials, however, the transfer to the customer was postponed again due to inconsistency of financial and legal issues with the customer.

We are in Yandex Zen
The delivery of the Viktor Chernomyrdin diesel-electric icebreaker was postponed
Laid the keel of the first Soviet-era icebreaker with a capacity of 25 megawatts
43 comments
Information
Dear reader, to leave comments on the publication, you must to register.