According to the tactical and technical specifications of the Ministry of Defense. What is good about the Lens? 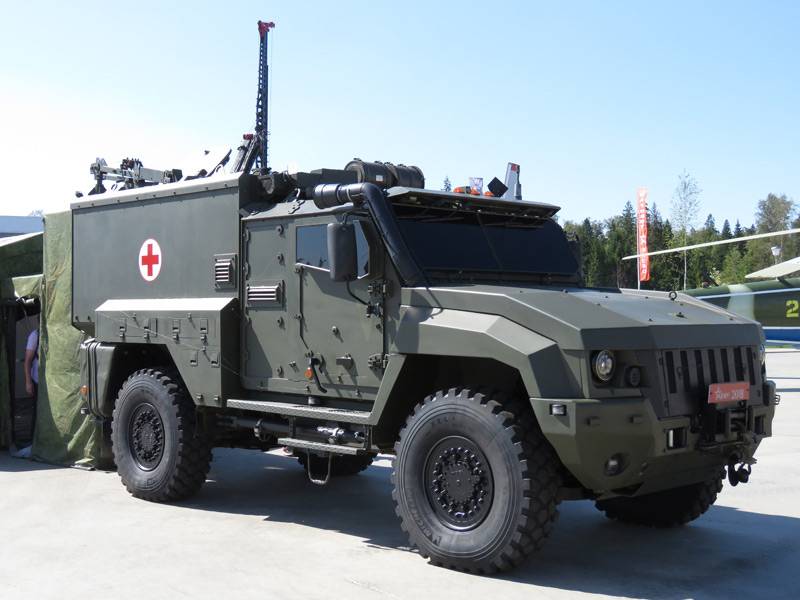 On April 27, 2020, the press service of the Russian Ministry of Defense announced that the motorized rifle division of the 58th combined arms army deployed in Chechnya received new Lens armored ambulances. New armored vehicles are based on the Typhoon-K armored car. For the first time, a new ambulance car designed to evacuate the wounded from the battlefield was introduced in 2018 as part of the Army-2018 international military-technical forum.

According to the press service of the Southern Military District, this summer, as part of tactical exercises in the field, medical personnel will be able to practice ways and procedures for evacuating conditionally wounded soldiers from the battlefield using new armored sanitary equipment. According to Igor Zarakhovich, the chief designer of the enterprise-developer of the Lens armored ambulance car, the car passed the entire test cycle stipulated by the contract for development work back in 2019. At the same time, the Remdiesel enterprise emphasizes that the new armored car was created according to the tactical and technical task of the Russian Ministry of Defense, in the preparation of which the medical service of the military department also took part.

The appearance of the armored ambulance car "Lens"

All the conflicts of recent years only confirm the importance of medical service in the army and its need to reduce losses and quickly provide medical assistance to wounded servicemen. Often, the wounded have to be evacuated directly from the battlefield. In these conditions, the speed and quality of first aid, as well as the speed of delivery of the wounded to at least the nearest dressing station or field hospital, are of great importance. The sooner the wounded man falls into the hands of doctors in the hospital, the higher the chances that the fighter will not die and will not remain disabled. In this sense, all modern armored medical vehicles are designed to fulfill the golden hour rule: provide first aid to the wounded and promptly deliver them to the next stage of medical evacuation. 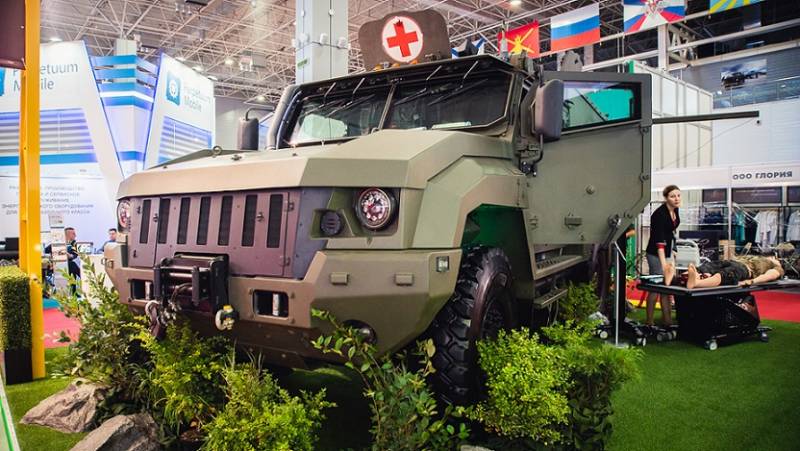 Armored ambulance car "Lens"
All this was well understood in the USSR, where a whole family of specialized armored medical vehicles (BMMs) were developed, built on the chassis of armored personnel carriers and infantry fighting vehicles. The BMM family was greatly developed, made on the chassis of the BMP-1 infantry fighting infantry fighting vehicles (these are BMM-1, BMM-2, and BMM-3 vehicles). Also widely used are medical options for the MT-LB armored personnel carrier. And specifically for the landing units on the basis of the armored personnel carrier BTR-MD, a line of armored medical vehicles BMM-D "Injury" was created (BMM-D1, BMM-D2, BMM-D3). Moreover, all this equipment was created on the basis of the chassis, which are either not produced at all by the Russian industry, or have become seriously outdated. An important feature was that all the BMMs listed are tracked vehicles.

The moral and physical obsolescence of the chassis of this equipment raised the question of the development of new armored medical vehicles before the Ministry of Defense. At the same time, priority was given to wheeled vehicles. For example, in the mid-2010s, the Ministry of Defense acquired several BMM-80 Symphony, built on the basis of a wheeled armored personnel carrier BTR-80. But this medical machine, created several decades ago, did not become mass.

A tender for a modern armored ambulance was announced by the Russian Ministry of Defense in September 2016. The cost of the contract for the development of the R&D on the topic “Development of a secure tactical ambulance” (code of the Lens work) amounted to 46,509 million rubles. As the base car, the Russian military wanted to see an armored vehicle with a 4x4 wheel arrangement from the Tiger, Typhoon or Scorpion family of armored vehicles. Ultimately, the tender was won by the K-53949 Typhoon sanitary protected vehicle project, presented by specialists from Remdiesel AO from Naberezhnye Chelny. 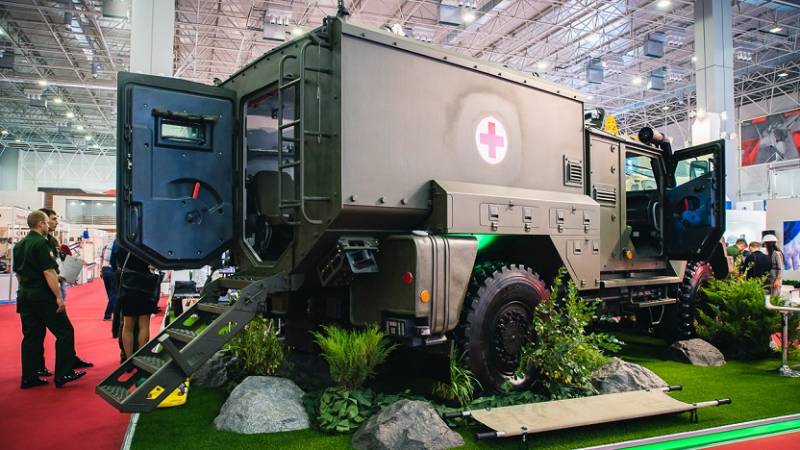 Armored ambulance car "Lens"
Prototypes of the first versions of the new ambulance were presented to the military in 2017, and the next year they made their full debut and presentation to the general public. Then, in 2018, in the framework of the Army forum, Remdiesel signed the first contract with the Russian Ministry of Defense for the supply of 27 armored ambulances with the implementation of the contract until the end of 2020.

Possibilities of the protected Lens ambulance

Within the framework of the implemented tender and the technical assignment issued by the Ministry of Defense, specialists of the Remdiesel company created two versions of a tactical-link protected ambulance (ZCA). The first of these is the classic medical transporter (ZSA-T), designed to search, collect and remove wounded soldiers directly from the battlefield, as well as from the centers of mass sanitary losses. At the same time, doctors can provide assistance to the wounded on the spot or directly on board the Lens. The second option is the machine of the medical center of the battalion (ZSA-P), the main purpose of which is to transport various medical equipment and deploy on its basis a medical center of the battalion at any given point.

Unlike the K-53949 Typhoon armored single-volume all-terrain vehicle with a capacity of 10 people, the new protected ambulance based on it received a two-seater cabin and a new special armored medical module. In the version of the medical conveyor ZSA-T, the medical module provides 6 folding seats for the wounded or a place for 2-4 stretchers. At the same time, the combined transportation of the wounded is possible, when three lightly wounded are placed on folding seats along one side, and two seriously wounded are transported on a stretcher. 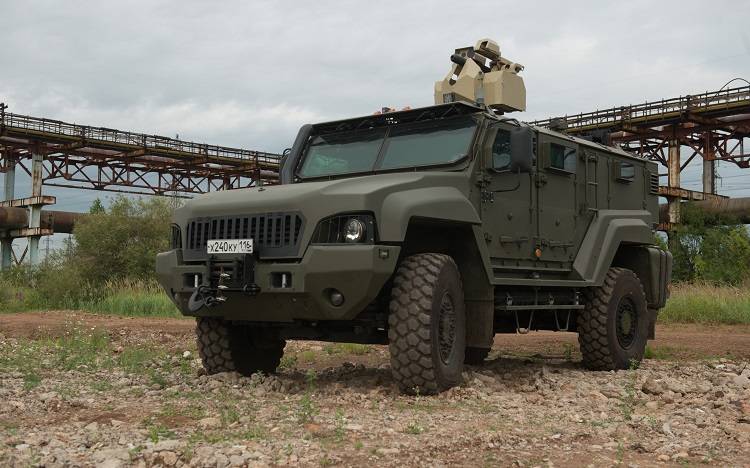 The combat version of the armored vehicle Typhoon K-53949
In the variant of the medical center of the battalion (ZSA-P), the car provides 5 seats for the crew, as well as two places for attaching a stretcher, this car is also equipped with a frame tent. According to the press service of the Ministry of Defense, the Lens protected ambulances are equipped with special devices for pulling the wounded out of hatches, dragging the wounded, as well as shields for carrying soldiers with spinal injuries and other specialized medical equipment.

An important feature is that the new medical vehicle retained all the advantages of its military progenitor. "Lens", built on the basis of a vehicle of the Typhoon family, reliably protects the crew and the wounded from small arms fire weapons, and also features enhanced mine protection. The car stands out favorably with increased ground clearance and a V-shaped bottom, which allows you to effectively dissipate the energy of the explosion and deflect fragments to the side. The body of the new Russian protected ambulance can withstand blasting on an explosive device with a capacity of up to 8 kg of TNT under any of the wheels. At the same time, the wheels of the armored car themselves are also armored. Even with a seriously damaged wheel, the Lens will be able to drive at least another 50 kilometers on rough terrain, according to the press service of the Russian Ministry of Defense.

Thanks to the powerful KamAZ 610.10-350 diesel engine developing a maximum power of 350 liters. with., four-wheel drive car with a total mass of 16 tons is able to accelerate along the highway to a speed of 105 km / h. Two tanks of diesel fuel with a capacity of 180 liters each are enough to provide the vehicle with a power reserve of at least 1000 km. The ground clearance declared by the manufacturer is 433 mm and is adjustable. Overall dimensions of the car: length - 7130 mm, width - 2550 mm, height - 3100 mm. 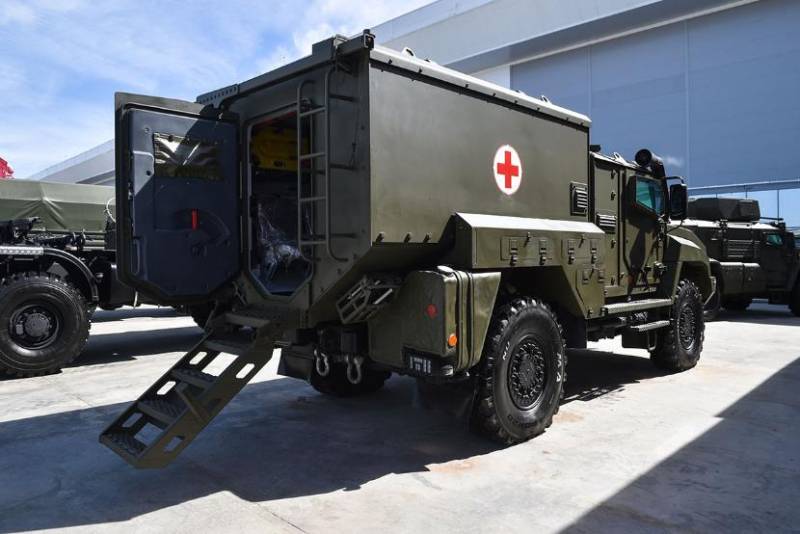 Armored ambulance car "Lens"
The 4x4 all-wheel drive vehicle has good cross-country ability, which is especially important, since often the wounded have to be evacuated from areas with poor transport accessibility. Without any training, the Lens armored ambulance can cross a ford up to 1,5 meters deep (with special training 1,75 meters). The height of the overcome vertical wall is 0,6 meters, the width of the overcome ditch is not less than 0,6 meters. The angle of climb - 30 degrees.