From "Nikolaev" to "Kerch". How BOD of project 1134-B was built, served and departed

In February, on the large anti-submarine ship "Kerch" of the Black Sea fleet lowered the naval flag. A few days ago the ship was taken to Inkerman Bay, where its disposal will soon begin. These events put an end to the long and interesting stories ships of project 1134-B "Golden Eagle-B". BODs of this type have served since the early seventies and displayed a flag in the most remote areas, but their time has passed.

The history of pr. 1134-B dates back to the fall of 1964, when it was decided to develop a new ocean defense air defense-spacecraft. They decided to build the future BOD, Pr. 1134-A, on the basis of the missile cruiser, Pr. 1134, while maintaining the hull and a number of systems. Subsequently, project 1134-A was successfully brought to construction.

In April 1966, even before the completion of work on pr. 1134-A, the Navy and the Ministry of Industry and Industry launched the development of a new anti-aircraft defense aircraft (subsequently transferred to the BOD class) with other weapons and a gas turbine propulsion system. The development of such a ship was entrusted to the Northern Design Bureau.

In November 1967, the technical project 1134-B "Berkut-B" was approved. By this time, the design organization managed to transfer to the Plant them. 61 Kommunara (Nikolaev, USSR) the main part of the working documentation, and there they were in full swing preparing for the construction. Also the Nikolaev Southern Turbine Plant, which was to supply engines, was preparing for construction. 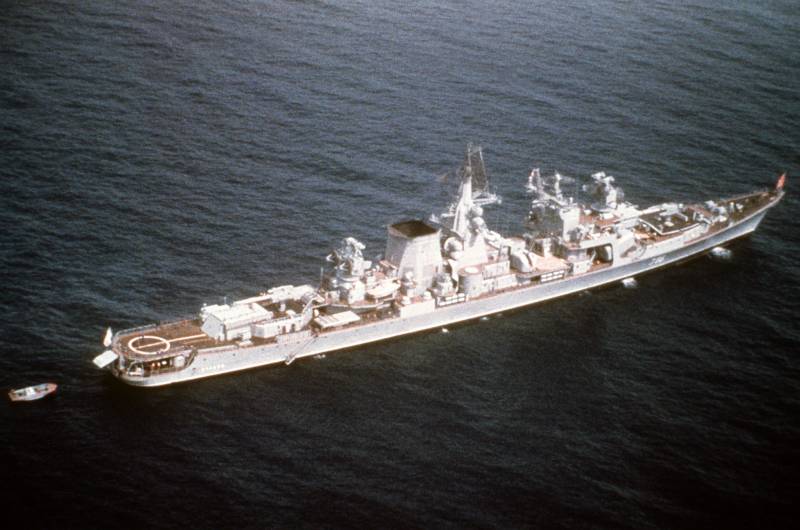 On June 25, 1968, the ceremony of laying the head BOD, which received the name "Nikolaev", took place. In December of the following year, the ship was launched and sent for completion. In 1970, factory tests began. State tests were carried out in December 1971, and on the last day of the year the fleet accepted the ship. Soon he was introduced into one of the compounds.

Thus, from 1968 to 1979, the Nikolaev shipbuilders transferred seven new combat units to the Navy. A new type of BOD was divided between the two fleets. The first four ships remained on the Black Sea - “Nikolaev”, “Ochakov”, “Kerch” and “Azov”. Three others were sent to serve in the Red Banner Pacific Fleet. Later, in 1984, it was decided to strengthen the KTOF anti-submarine forces by transferring the Nikolaev ship from the KChF to them.

Ships in the service

A characteristic feature of BOD pr. 1134-B was high seaworthiness and driving characteristics. All this made it possible to confidently solve the tasks of tracking the probable enemy’s submarines, as well as to work at a great distance from the bases, including in the ocean zone. 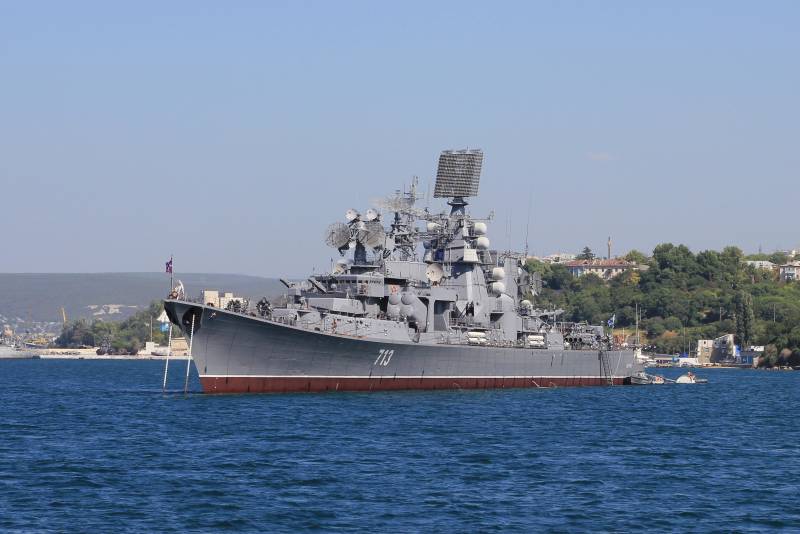 Kerch in Sevastopol, 2012. Two years left before the ill-fated repair
"Golden Eagles-B" from the KChF were distributed among several brigades of anti-submarine ships. In the future, their affiliation has repeatedly changed. The fleet's plans included the use of such BODs as part of naval search and strike groups operating in the Black and Mediterranean Seas, as well as in the Atlantic Ocean. Ships repeatedly worked as part of the 5th operational squadron.

The ships for the KTOF were initially distributed among various formations, but in 1979 they were included in the 175th brigade of missile ships of the 10th operational squadron of the Pacific Fleet. In the mid-eighties, new transformations began, as a result of which the Berkut-B changed their place of service. So, in 1985 they were transferred to the 183rd brigade of anti-submarine ships. In 1991, they became part of the 48th division of anti-submarine ships.

The objective of the BOD Pr. 1134-B from the KTOF was to patrol important areas of the Pacific Ocean in order to search for strategic missile carriers of a potential enemy. Soviet naval groups regularly went to sea and organized vigil in probable missile launch areas, including and very remote - all the way to the Philippine Sea. Such a service lasted until the first half of the eighties.

By this time, the likely enemy had received new SSBNs, armed with intercontinental SLBMs, the launch of which could be carried out almost at their own bases. The patrol routes changed dramatically, which then affected the features of the Soviet BOD service. In 1980-85. "Golden Eagles-B" KTOF began to use their anti-submarine capabilities in a different way. 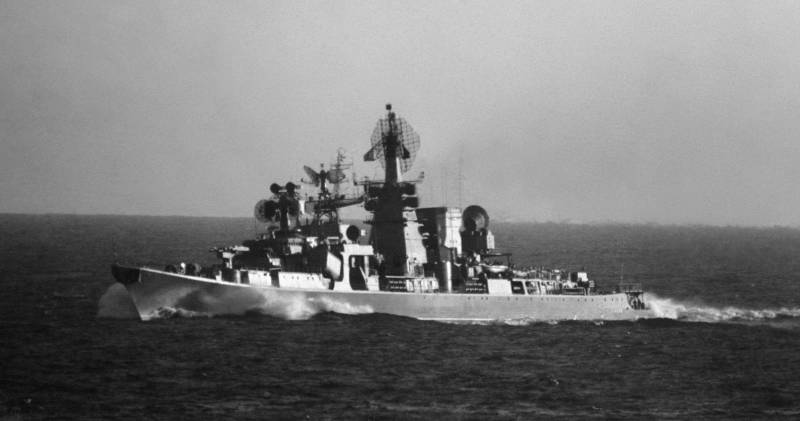 The ship "Azov" in one of the last campaigns, 1988
Now the BODs had to accompany their SSBNs to the areas of combat duty, as well as search and supplant the multi-purpose hunting boats of the likely enemy. In addition, the possibility of carrying out deep modernization of ships was considered, after which they could accompany and protect surface ship groups when working at a great distance from the bases.

It is worth noting that in the history of the BOD pr. 1134-B service there were not only long trips with the search for submarines, but also more interesting episodes. So, in November 1981, the BOD “Tallinn” crossed the Indian Ocean, where it met with the patrol “Flying”. On November 26-27, an attempted coup d'etat took place in the Republic of Seychelles, after which Soviet ships received orders to arrive in Victoria, evacuate embassy workers and, if necessary, support the legitimate government. Already on November 28, two ships arrived at the specified port.

Local authorities managed to repel the attack and arrest several mercenaries. In December, Tallinn and Flying left the Seychelles for several days, but then returned and remained in Victoria until mid-January 1982. The direct participation of the USSR Navy in the battles was not required, but the arrival of two ships clearly demonstrated the interests of Moscow in the region - and, probably, significantly influenced further events.

In the late eighties, the situation began to change. The Navy made serious plans to modernize the BOD, Pr. 1134-B, but their implementation was in question. In addition, due to political and economic problems, military service exits soon ceased. The future of Berkutov-B has become foggy. 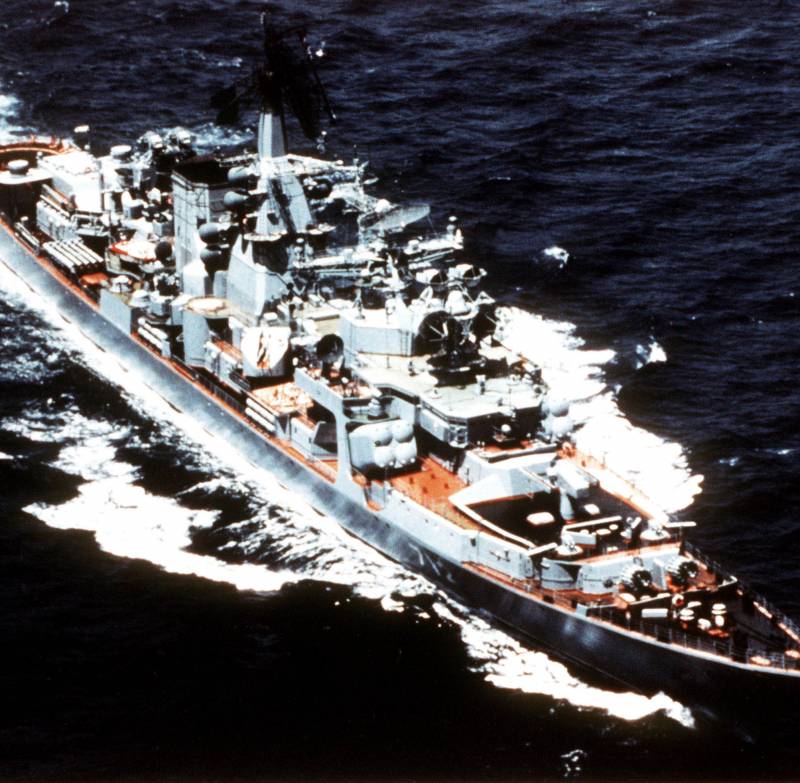 "Petropavlovsk" at sea. US Navy photographer has the opportunity to consider his weapons
In the first years after the collapse of the USSR, only one ship was able to carry out a military campaign - in 1993, “Kerch” solved problems in the Mediterranean Sea. In addition, in 1993-98. several ships of the KChF and KTOF made voyages with friendly visits to foreign ports. However, there was no question of restoring full duty on duty.

In 1987, the head BOD came to Nikolaev for a major overhaul, which took several years. In 1988, the repair of Tashkent began. Due to the collapse of the USSR, the repair of two ships was not completed, and in the fall of 1992 they were completely excluded from the lists of the Navy. In 1994, two BODs were sold to India for cutting metal.

Other problems were encountered by Ochakov, who in 1991 came to the Sevastopol Marine Plant for overhaul. Two years later, a fire broke out on the ship, which required additional restoration work. The repair schedule was revised, and the ship's return to service was moved to the beginning of the two thousandth. However, this did not happen. In 2008, the BOD was taken out of the dock and sent to sediment; in 2011, they lowered the naval flag.

In March 2014, Ochakov participated in a real operation for the last time. "Polite people" flooded the defended ship at the entrance to about. Donuzlav. What contributed to the return of Crimea. Later BOD was picked up and sent for recycling. 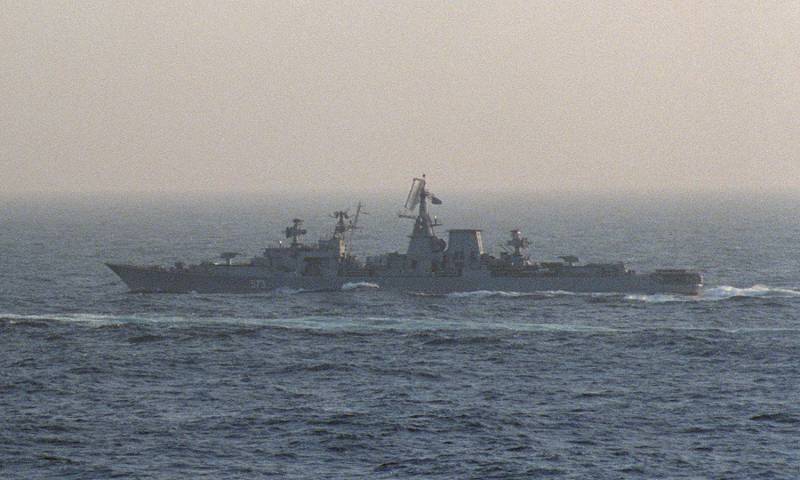 "Tashkent" - the sixth BOD series
In the fall of 1992, the BOD Tallinn was renamed Vladivostok. In the summer of 1994, Vladivostok and Petropavlovsk were expelled from the KTOF. In 1996-97 two ships were sold to Indian enterprises for cutting.

In 2000, the penultimate Berkut-B, Azov, was withdrawn from the Navy. This ship completed its journey in Inkerman, where they were disassembled. After that, in the Russian Navy, there was only one BPL, etc. 1134-B, “Kerch”.

In 2005-2006 “Kerch” underwent regular repairs with the replacement of some units and maintenance of a number of systems. After that, the BOD returned to service and resumed access to the sea. Plans were made for modernization to extend service life.

In the summer of 2014, the ship was again repaired. After its completion, “Kerch” was to become the flagship of the KChF, replacing the “Moscow” missile cruiser, which was waning for repairs. However, on November 4, a major fire occurred on board the BOD, seriously damaging several aft compartments. Inspection of the structures showed inexpediency of restoration; the ship was offered to write off. In the future, it was proposed to convert the BOD into a training or headquarters vessel, but then returned to the disposal plans.

In the summer of 2019, it was announced that in 2020, the Kerch BOD would nevertheless go for recycling. On February 15, 2020, the flag was lowered on the ship. On April 24, under the “Farewell of the Slav” and the long beeps of other Kerch ships, they were brought out of Sevastopol for the last time. Now, Inkerman will carry out work on cutting the ship into metal. 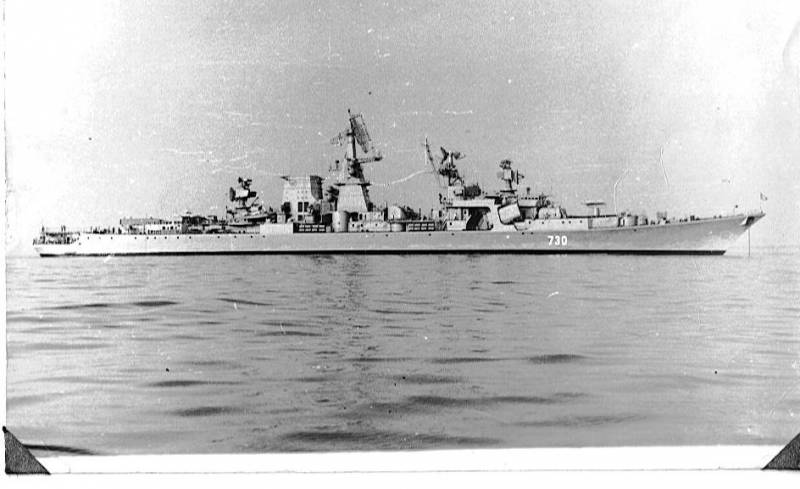 "Tallinn" at the anchorage, 1981. In the same year, the ship helped the Seychelles government
It should be noted that Kerch will still serve the fleet, albeit in an unusual way. In 2016, it became known that gas turbine engines would be removed from the ship and used to repair the Ladny prospect, pr. 1135. This ship will again go to sea in May.

The first BOD, pr. 1134-B, was transferred to the fleet at the end of 1971, and at the beginning of 1972 it entered the combat personnel. The last ship began service in 1980. For two decades, the ever-expanding Berkutov-B group has served in various parts of the World Ocean and has been looking for enemy submarines, preparing to prevent an enemy nuclear missile strike or defending its own SSBNs.

However, by the beginning of the nineties the situation had changed dramatically, and in just a few years almost all anti-submarine ships were decommissioned due to the impossibility of repair and full operation. Only one "Berkut-B" survived to our time - however, the fire predetermined its future fate. The era of large anti-submarine ships of project 1134-B came to an end. The last of them will soon be cut into metal.

We are in Yandex Zen
Service history "Svetlana"
"Svetlana". History of creation
35 comments
Information
Dear reader, to leave comments on the publication, you must to register.