Sea dragon: China creates the largest seaplane in the world 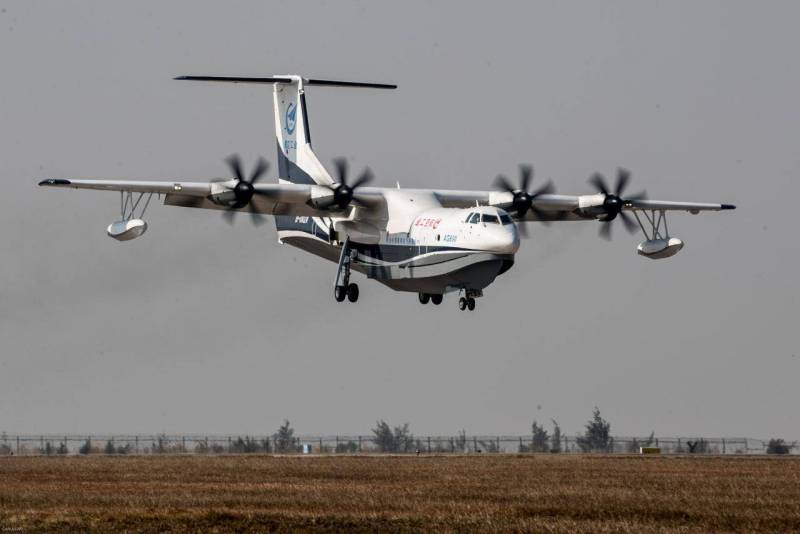 In April this year, Xinhua News Agency reportedthat the new Chinese aircraft AG600 "Jiaolong" went through another important stage on the way to its full birth. The machine first made a series of flights over the sea surface. This is not the first flight over water. In October 2018, a seaplane successfully took off from the water surface and landed on it: then the tests were carried out on the freshwater reservoir of the Zhanghe River in Hubei Province. Recall that the car made its first flight back in 2017, taking off from Zhuhai Airport.

Speaking specifically about recent marine tests, they have fundamental differences from earlier tests. Tests allow you to evaluate the effect of the marine environment on the glider of the machine and the operation of its systems. This test phase is intended to prepare the AG600 for the next, even more important. Namely - for takeoff and landing in marine conditions. The wait is not so long: if everything goes as the Chinese plan, then the first such tests will take place before the end of 2020.

History This machine began back in 2009: it was then that the specialists of the China Aircraft Corporation (AVIC) began work on the creation of the aircraft. The development and production of the AG600 involved 150 institutes and research centers and 70 enterprises of Chinese industry. They invested about three billion yuan (more than $ 440 million) in development: not a little, but not a lot by the standards of modern aircraft manufacturing. The first prototype rolled off the assembly line in 2016.

The Chinese have traditionally ambitious plans. The machine should become a real "workhorse", performing a variety of tasks: putting out fires, conducting search and rescue operations, cargo delivery and so on. The Chinese expect it to be used both for peaceful purposes and for the needs of the People's Liberation Army. There, the plane is seen as a patrol flying boat.

The aircraft is 37 meters long and has a wingspan of 38,8. De facto this is the largest seaplane of all of them existing in our time. However, it is appropriate to say that the Soviet A-40 Albatros was larger: it had a length of 45,70 meters and a wingspan of 42,50. Well, the largest amphibious aircraft of all time is the famous Hughes H-4 Hercules.

"Chinese" boasts impressive features. The maximum take-off weight of the AG600 is 53,5 tons, and the duration of stay in the air can reach twelve hours. According to data from open sources, the aircraft can collect twelve tons of water in twenty seconds. Four WJ-6 turboprop engines allow it to fly at a speed of up to 570 kilometers per hour.

As you can see, the program is developing, and the pace of development deserves respect. Involuntarily, not the most pleasant comparison arises with the Be-200 amphibious aircraft, which they began to develop in the early 90s and which made its first flight back in 1998. Despite the increased attention to the project from the authorities and the media, today they have produced a little more than a dozen such machines, which, of course, is a very modest figure. However, the economic potential of Russia and China is fundamentally different, this should not be forgotten either. 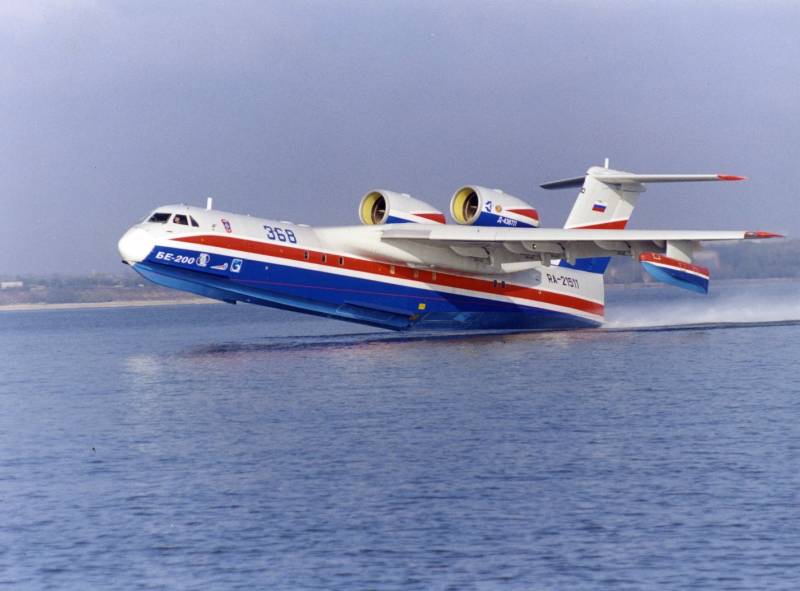 In general, the Chinese approach issues related to the development of the aircraft industry comprehensively and on a large scale. The AG600 is only part of a program to create brand new winged vehicles. In addition to Jiaolong, the top three large aircraft that should be sold in this area include the military transporter Y-20 and the passenger C919. This, of course, is far from all that China wants to receive in the coming years.

It is worth recalling that as far back as 2017, the PRC air forces officially armed themselves with a fifth-generation fighter J-20, and now an inconspicuous strategic bomber Xian H-20 is approaching (probably a direct analogue of the American B-2). Thus, the total number of key projects for the Chinese aircraft industry can be increased to five, although there is still a very important Russian-Chinese project for the CR929 wide-body passenger aircraft. But this is not the near future.

There is no doubt that the Middle Kingdom will have time, desire and opportunities to implement not only them, but also many other aviation projects. Another question is whether there will be global demand for them. According to economists, in the modern world there is no problem to produce anything, but there is a big problem to sell manufactured goods. And if you don’t have to worry about the fate of the passenger C919 (Chinese companies have already placed orders for hundreds of such cars), in the case of the AG600, everything is far from being so rosy. 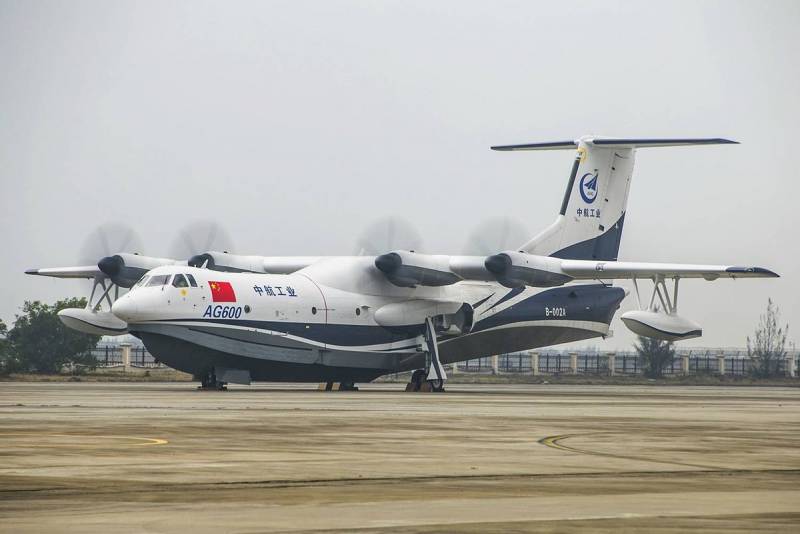 Photo: AG600 (flickr.com defensedesk)
Despite the wide functionality possible, the market does not need many of these machines. Earlier it became known that China Aviation Industry General Aircraft received orders for seventeen new seaplanes. Signing even one major international contract will be a great success.

But competitors are not asleep. Japan several years ago lifted the ban on the export of military equipment and dual-use products. And Shin Maiwa, in turn, received permission from the Ministry of Defense to export the new ShinMaywa US-2 amphibious aircraft, the tasks of which overlap with those of the AG600 and the Russian Be-200. At the same time, US-2 is already in operation - it is used by the Marine Self-Defense Forces. 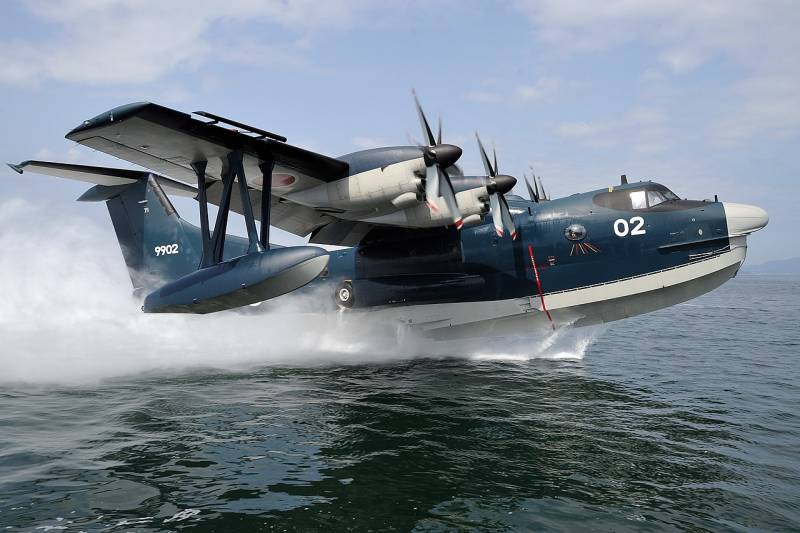 It is noteworthy that it is the Asian market that the Japanese are most actively exploring (which, of course, is quite logical). Earlier, US-2 won the Indian tender with the delivery of fifteen new aircraft. The four-engine “Japanese” is also interested in Indonesia.

But what about Russia? Obviously, despite all the difficulties the Be-200s will continue to build. Recall, on February 200, a Be-2018ES aircraft built for the Ministry of Defense took off for the first time in Taganrog. The total number of cars that will be delivered under the renegotiated in XNUMX contract is three.

And in September last year, it became known that Russia would try again to become the manufacturer of the largest seaplanes, challenging the PRC: as it became known then, the Russian Ministry of Defense decided to resume the development of the Albatross amphibious aircraft project. “After refinement, the device will receive modern means of detecting submarines, and this will significantly expand its combat capabilities,” said then Admiral Valentin Selivanov, former chief of the Navy Main Staff. - Basically, aircraft of this type are designed for operations in coastal seas, including the Baltic, Black, Barents and Japanese. "Albatross" is equipped with a range of tools for detecting submarines. For example, it can reset and remotely install special buoys and other devices that help detect the enemy. " 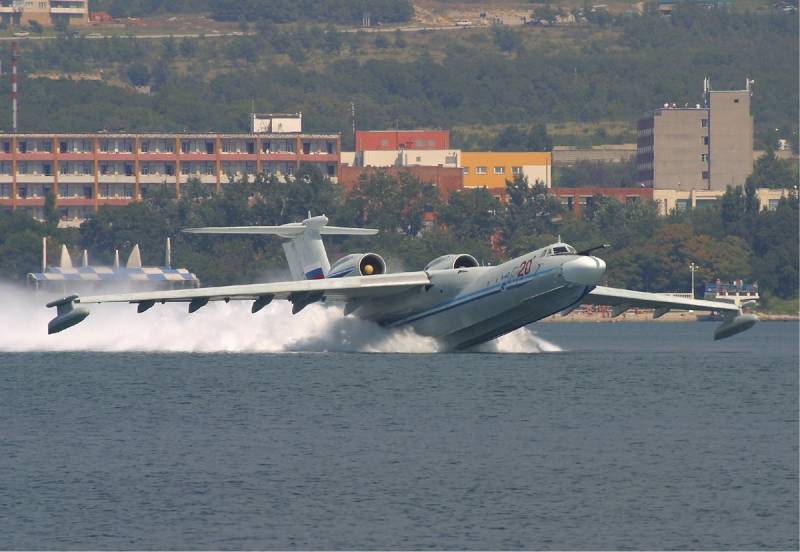 Of course, it’s good to have Napoleonic plans. But even better when there is scope for their implementation. China, despite all the difficulties described above, has them.

Ctrl Enter
Noticed a mistake Highlight text and press. Ctrl + Enter
We are
The world's largest serial seaplane: AG600 (China)An-12 in Afghanistan
35 comments
Information
Dear reader, to leave comments on the publication, you must to register.