What is interesting knife for the fleet of NMU 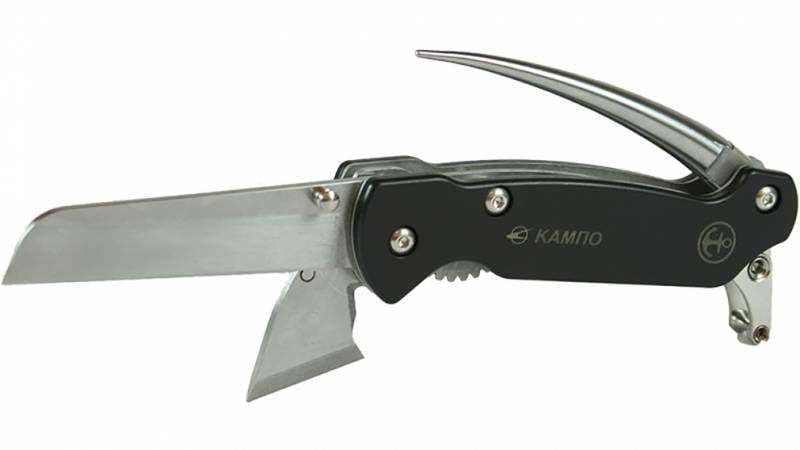 NMU in the "expanded" position, showing all the tools

Armed with various naval structures fleet Russia currently consists of a wide range of different knives for combat and working purposes. It is reported that in the near future another model will come into service - the “Marine universal knife” or NMU. This product retains the basic functions and capabilities of some of its predecessors, and also provides a solution to new challenges.

On April 25, the Navy Information Support Group announced the prospects of the NMU product. The official report not only talks about the imminent arrival of the knife into service, but also reveals the basic data on its development and capabilities.

NMU was developed at KAMPO JSC (Orekhovo-Zuevo, Moscow Region). The development of the knife began on an initiative basis, but taking into account the tactical and technical requirements of the fleet. The project was ready in 2019, after which the next necessary activities started.

Now the Navy is in the process of adopting a knife into service. The manufacturing organization, in turn, is preparing a production line for the release of the first installation batch. The supply of serial NMU knives under a state contract should begin this year.

According to the press service of the Navy, the NMU knife is a multifunctional device for solving a wide range of tasks. It is proposed to be used for mooring, rigging, electrical or emergency rescue operations. As such, NMU can be used both by crews of ships and ships, and by military personnel of coastal units.

From the point of view of the main design features, NMU is another development option of the so-called boatswain or boat knife. Moreover, this concept was developed through the use of modern materials and technical solutions. In addition, a standard set of tools for this class was added with a new one.

NMU from KAMPO is a three-instrument folding knife with several functions. The product has a handle of complex shape with plastic pads. In front of the common axis are two blades of different sizes and purposes. The back of the handle carries a foldable pile and a loop for a safety strap. 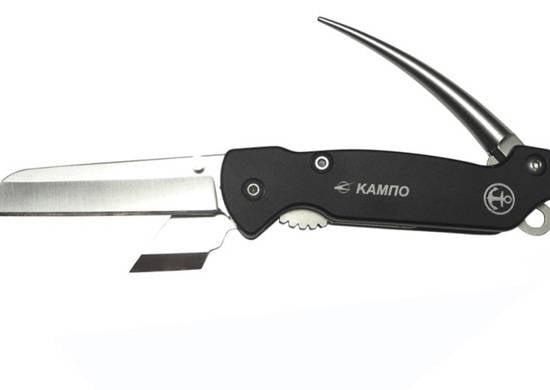 Unfortunately, the dimensions of the “marine knife”, the materials used and other design features have not yet been specified. Nevertheless, its general capabilities are known and, accordingly, the scope of application.

The NMU received a medium-sized main blade, which is laid out manually using a lateral protrusion. The type of lock for locking in open and closed position is unknown. The main blade of a trapezoidal shape with high descents is made single-blade. The tip is bent, there is no tool on the butt. The blade is designed for cutting various objects and materials for various purposes.

The knife is also equipped with an additional blade with a similar layout method. It has a shorter length and a different shape. On an additional blade, a stripper is provided, which is proposed to be used for cutting cables during electrical work.

Like the traditional "boatswain" knife, the new NMU has a curved pile for working with ropes. This tool facilitates knitting and unraveling of knots, separation of strands of rope, etc. The declared ability to perform rigging with both synthetic and vegetable cables or ropes.

In fact, the "Marine Universal Knife" is another development option for a long and well-known concept that provides solutions to the typical tasks of the fleet. At the same time, due to some updating of the design and use of modern materials, advantages are provided over the "boatswain knives" of old models.

One of the main advantages of the new NMU can be considered improved ergonomics. The “anatomical” handle not only holds the necessary devices, but also provides sufficient convenience for holding the knife and work. Boat / boat boats of old models in this context were often criticized.

Having a “long” blade and pile, NMU provides the solution to the same problems as its predecessors. It can cut various objects and materials, and also helps in working with ropes. For greater versatility in terms of cutting, an additional blade of other contours has been added. In addition, the customer and the developer took into account that the modern fleet service is not only connected with ropes - for this reason a tool for working with the cable appeared. 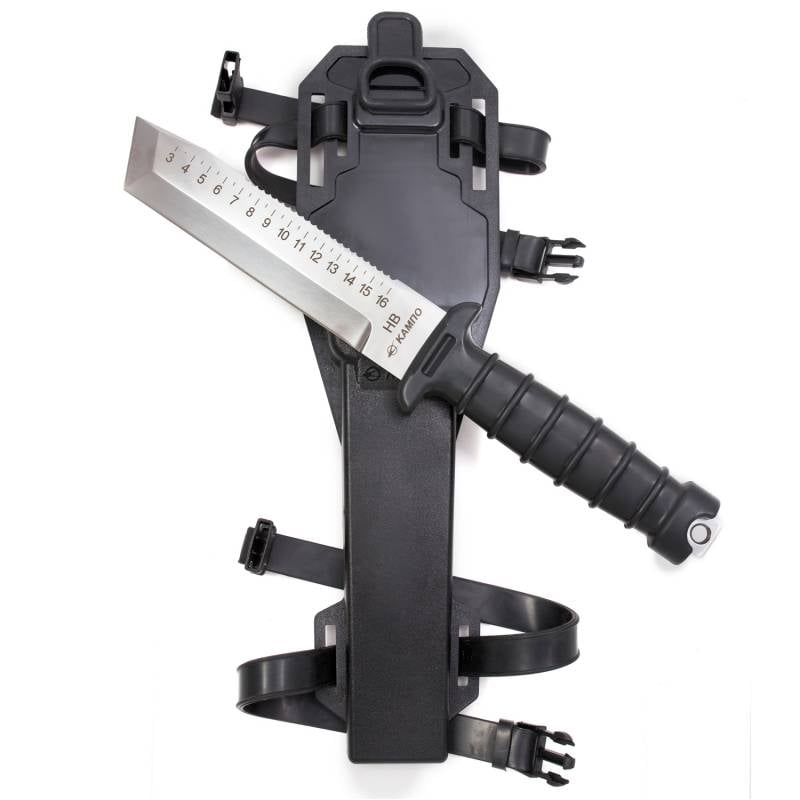 KAMPO NV diving knife is another example of a multifunctional system for the fleet
At the same time, there are some “weaknesses” in the design of the NMU that can negatively affect its operational characteristics. So, the main blade has very limited opportunities for an injection. The published photos show that the design is assembled on screws, which over time can become loose and degrade performance. You can also recall the eternal opposition of universal designs and specialized tools.

However, the NMU knife was created according to the tactical and technical requirements of the fleet, and such documents very accurately describe the desired design. Apparently, all the observed features of the knife appeared precisely at the request of the Navy, which represents which products he needs.

It should be noted that a number of various knives for various purposes are already in service with various structures of the Russian Navy. Combat and working knives of different models are intended for combat swimmers, marines, anti-sabotage units, etc. The new NMU will have to supplement all these products, occupying one of the most important niches.

It is also necessary to recall that KAMPO already has some experience in creating knives for the fleet. So, a few years ago, the "Diving HB Knife" was created and adopted for use, intended for use as part of various sets of equipment. As in the case of the new NMU, the HB product is suitable for performing various works related not only to cutting, but in its case the multifunctionality problem is solved within one blade.

HB has a fixed blade of approx. 170-180 mm with a tip in the form of a scraper. On the butt is provided a serrator. A 160 mm long ruler is provided on the side surface of the knife. Such a tool is capable of cutting and sawing, cleaning surfaces and measuring small objects. In other words, the HB diving knife not only helps in different jobs, but also replaces several other tools.

It is curious that the fleet, when ordering new tools, uses the principles of universality to a reasonable extent. For different structures, multifunctional systems with different capabilities are created - according to their needs and requirements. So, divers have already managed to test the multifunctional HB, and in the near future other units of the Navy will receive the promising NMU of the installation batch and will be able to test it in practice. Each of these samples, having ample opportunities, is adapted specifically to its niche.

Ctrl Enter
Noticed a mistake Highlight text and press. Ctrl + Enter
We are
About the future of underwater robotics"Svetlana". History of creation
20 comments
Ad