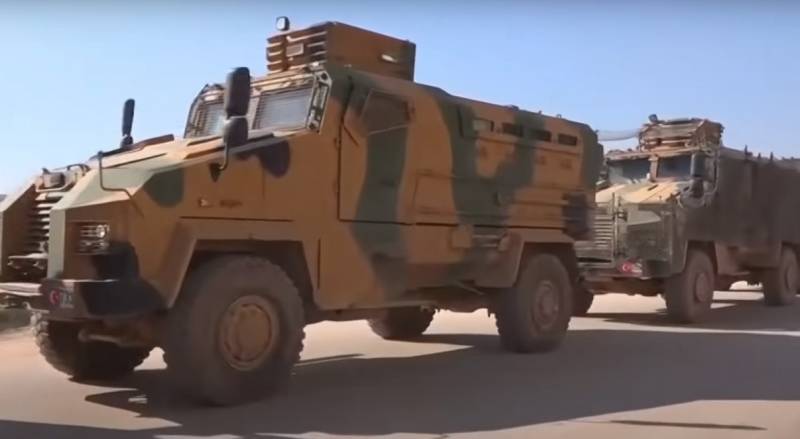 The situation in Syria on the last day of April 27-28 remained tense. In the province of Idlib, a confrontation between the Turkish army and radical militants intensified. In Deir ez-Zor, American soldiers went missing.


Supporters of the Khayyat Tahrir al-Sham group banned in Russia, which has recently been in a difficult relationship with Ankara, tried once again to block the road to prevent the construction of another Turkish observation post and the opening of a humanitarian corridor. They were pushed back by members of the Turkish army and the Turkish-controlled Syrian National Army.

Near the city of Nairab, in response to the hostile actions of the Turkish army, HTS fighters attacked the Turkish checkpoint. In response, the Turkish army with the help of shock UAVs struck at the positions of the radicals. Two militants of the KhTS were killed as a result of a Turkish Air Force drone attack.

Recall that earlier the KhTS militants tried to take advantage of the Turkish presence to hide from the attacks delivered by the SAA. The roadblocks in Idlib turned into "umbrellas" for militants of various groups. The Turkish military actually supported armed gangs. But when the SAA does not advance, supports the ceasefire, the Turkish soldiers themselves became the objects of attack from the militants. Unexpected turn of events.

It is important to note that Turkey has previously committed itself to temper controlled militants. However, without strikes from the UAVs, "not everyone" wanted to "slow down" ...

In the province of Aleppo, meanwhile, more and more clashes are taking place between the Kurdish Popular Self-Defense Forces and the Syrian National Army. So, in the area of ​​the village of Dzherablus, an SNA car was fired by unknown people, three militants of this structure were injured.

In the vicinity of the city of Basut, a high-ranking field commander of the pro-Turkish SNA died as a result of a car explosion. His colleagues from the SNA Internal Security Service, who arrived at the scene, decided that the explosion was organized by Kurdish fighters from the Afrin Liberation Force. They are also suspected of killing an employee of the Internal Security Service of the SNA in the village of Tel Batal.

However, while in the province of Aleppo, the SNA is relatively united in the fight against Kurdish militias, in the province of Hasaka, clashes occur between the pro-Turkish militants themselves. As a rule, skirmishes arise as a result of disputes due to property stolen from civilians. In particular, near the village of Harbun, a shootout occurred between militants belonging to the Ahrar Al-Sharkyya and the 20th SNA Division. As a result, the Ahrar al-Sharkyya militants were left without a pickup truck with an anti-aircraft gun.

In the province of Deir ez-Zor, according to a local source, there was an armed attack on an American patrol, following in a desert area. Two American soldiers are missing. The militants of the Islamic State grouping banned in Russia are suspected of what happened. It is she who operates in the desert regions of the province, causing much harm to both the Syrian government forces and Kurdish militias, and the forces of the international coalition. Interestingly, IS-related structures can simultaneously be in touch with the international coalition, as Syrian sources have repeatedly reported.

In the northeast of Hasaka province, meanwhile, air patrols were conducted by helicopters of the Russian Aerospace Forces. They explored territory controlled by Turkish troops with the goal of finding radical armed groups that could attempt redeployment.

Thus, summing up the past days, we can draw the following conclusion. In the Turkish occupation zone in Idlib, the Turks already have to restore order, including by neutralizing local radicals. If earlier the latter were natural allies of Turkey against Bashar al-Assad, now the situation has changed.

If Turkey claims to control part of Idlib, it will have to take measures to limit mass robberies, move militants, and obstruct patrols by the latter, otherwise Ankara’s authority will suffer. In conditions of relative peace, “frostbitten” radicals from the groups of the so-called "Armed opposition" Turkey will not be needed.

Part of the militants can be called to order within the framework of pro-Turkish structures such as SNA, and the other part will either have to be simply destroyed here in Syria, or transported along the already familiar path to Libya. Indeed, while Idlib is the scene of the outrage of radical and often openly criminal groups, it is not possible to talk about the real control of the Turkish army over its territories. This is understood in Ankara and will eventually limit the radicals even more.