Steam tractor and its first use in the army 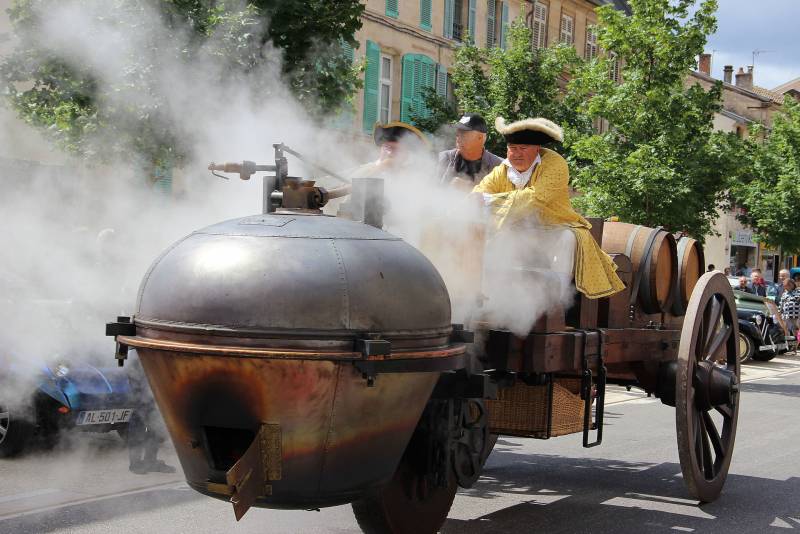 The first steam engine was invented by the Dutch physicist Denny Papen in the 1705th century. This was the simplest mechanism, which was a cylinder with a piston, which rose under the action of steam, and fell already under atmospheric pressure. Initially, the use of new steam engines was civilian. Vacuum steam engines, built in XNUMX by English inventors Thomas Newman and Thomas Siveri, were used to pump water from the mines. Over time, steam engines improved in different countries, which contributed to the emergence of new options for their use.

For example, in 1769, the French engineer and designer Nicolas Joseph Cunho designed the ancestor of all cars. It was a steam car, which in those years was called the steam cart Kunho. In fact, it was a prototype of all future cars and steam locomotives. The self-propelled cart quickly attracted the attention of the military from around the world. Although for the first time massively in military affairs, steam engines began to be used not on land, but on navywhere the first battle steamers appeared. Land steam transport was also gradually improved. In particular, in the second half of the XNUMXth century several fairly successful models of steam tractors appeared, which were used in the armies of Great Britain and the Russian Empire.

The invention of the steam engine was the first step towards the emergence of new technology, which then changed the whole world. First of all, we are talking about steam locomotives and ships. Moreover, already in the XVIII century the first prototypes of future cars appeared, however, with a steam engine. And even later, the first tractor with a steam engine will appear, which will also find application in civilian life and in military affairs. At the same time, the first who managed to create a self-propelled wagon will forever remain the French engineer Nicolas Joseph Kunho, who in 1769 designed and introduced the first steam car.

The car was very imperfect and today would only have caused a smile. The novelty was more from a cart than from a modern car, but it was still a breakthrough. The first model of new technology entered history like a "small cart Kunho". And already in the next 1770, the “Big Carto Kunyo” was also released. At the same time, the engineer himself called his brainchild nothing other than the "Fiery Cart." The total length of the first steam engine was 7,25 meters, width - up to 2,3 meters, wheelbase - 3,08 meters.

Kunho steam cart diagram
The base of the Kunho self-propelled cart was a massive wooden oak frame on three wheels without springs. The front wheel was a guide. It was over it that a massive-sized steam boiler was installed. The diameter of the boiler, according to some reports, reached one and a half meters. With a total weight of 2,8 tons, the Big Kunho Cart had a carrying capacity of about 5 tons, and the maximum speed was 3-4 km / h, that is, the steam engine was moving at the speed of a regular pedestrian.

The project was advanced for its time, but because of the low level of technology development in the second half of the 12th century, it had a lot of problems. For example, the steam pressure in the boiler was only enough for XNUMX minutes of movement, after which the steam boiler needed to be charged with water again and to kindle a fire under it. In fact, Kunho created, as they would say now, a technology demonstrator. It was an experimental model that could not be used in real road conditions.

It is noteworthy that already the first steam engine was created by order of the military and for a very specific purpose, which will then become the main one for many steam tractors. In the new car, the French military already saw a steam tractor for transporting heavy artillery systems. Thus, the "fiery cart" Kunho was originally intended to tow artillery pieces.

Almost 100 years have passed from the idea of ​​creating a steam artillery tractor to its implementation in practice. Although as early as 1822, half a century after the appearance of the Cunho project, a patent for the invention of a steam tractor was filed by David Gordon. The project proposed by Gordon was the first project of a wheeled steam tractor, but in practice it was not implemented, remaining paper forever, as is often the case with many inventions. For this reason, the full-fledged debut of steam tractors in the army took place only in 1856 during the Crimean War. 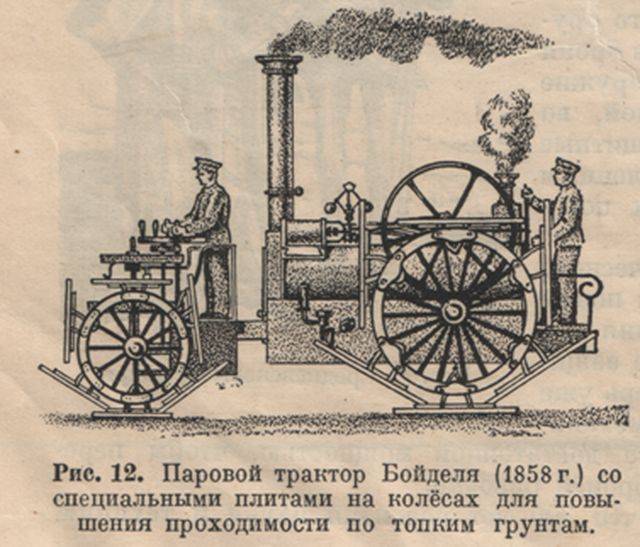 During the war, the British army used Boydel steam tractors in Crimea. This development attracted the military with high cross-country ability. To improve patency, the tractor wheels were equipped with special wide plates, which, due to the large surface area, reduced pressure on the ground. At the same time, the British did not lose interest in such tractors even after the conflict ended. The experiments with Boydel's tractors were continued and hit the pages of the press. It is known that the new Boydel steam tractors were tested even in Hyde Park and were public. At the same time, the English press of those years emphasized that the car is notable for its good mobility and maneuverability, it can accelerate to a speed of 4 miles per hour on a country road and carry cargo weighing from 60 to 70 tons. The cargo was transported in five specially built for testing large wagons.

According to the correspondent, the tractor could carry up to 160 soldiers with full equipment in makeshift cars, accelerating up to 6 miles per hour along the grassy lawns of the park. The tests satisfied the military, who believed that such a technique would be useful in India and other remote possessions of the British Empire. The main purpose of steam tractors in the army was to be the transport of guns and ammunition.

Already in 1871, another steam tractor was built in the UK. This time, Burell, who originally designed his machine as a steam engine tractor for an omnibus. Its main purpose was to be passenger transportation. Burella tractors were built in large enough quantities for their time and were actively sold for export. Part of the built samples turned out to be in the Russian Empire and Turkey. The tractor created by Burell was able to pull on a trailer loads weighing up to 37 tons with a dead weight of 10,5 tons. In urban conditions, such a tractor could accelerate to 8 miles per hour (almost 13 km / h). But even that was not a speed record. Created and tested in October 1871, the Ransoma tractor at a short distance showed a speed of 32 km / h, which was an excellent result for the self-propelled transport vehicles of those years. 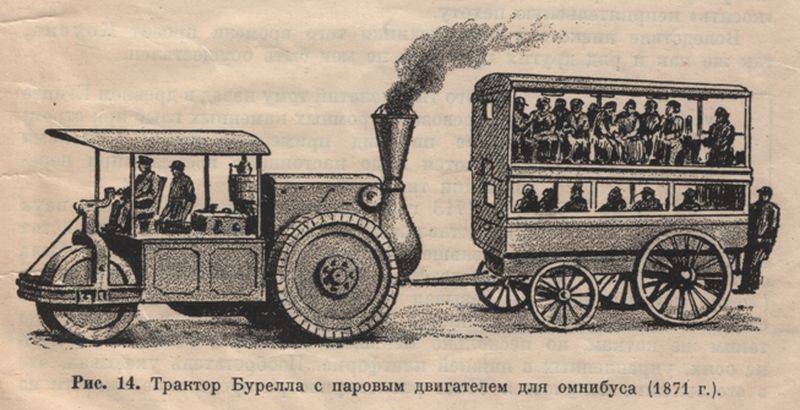 Steam tractor in the Russian army

For the first time, steam tractors were used in the Russian army during the war against Turkey of 1877-1878. They were used to transport guns, as well as transport various military cargoes, while the transport task was the priority and main one. The steam tractor, as it turned out, replaced horses well and turned out to be a more cost-effective vehicle. Moreover, all created steam tractors in military affairs were considered exclusively as vehicles. The military had no desire to use them in combat conditions, although the inventors proposed their own projects for creating steam combat vehicles. Many of these projects were prototypes of future tanksbut they were not realized in metal.

Returning to the Russian Imperial Army, it can be noted that steam tractors, mainly of British production, were used in the war with the Turks. Steam tractors, or, as they were also called, road locomotives, like many high-tech goods, were purchased in the UK. In the winter of 1876-1877, Russia purchased 10 tractors of various models, including six from Aveling & Porter, three from Clayton & Shuttleworth and one from Fowler.

All these tractors were combined into a “Special Team of Road Steam Locomotives”. In fact, it was the first in the history of our army motorized military transport unit. Throughout the entire military campaign, steam engines were used to supply the front with the necessary equipment for warfare, transporting a total of almost 9 thousand tons of various cargoes. After the war, equipment was transferred to Turkestan, where road locomotives served until 1881, until they were finally decommissioned after running out of resources. 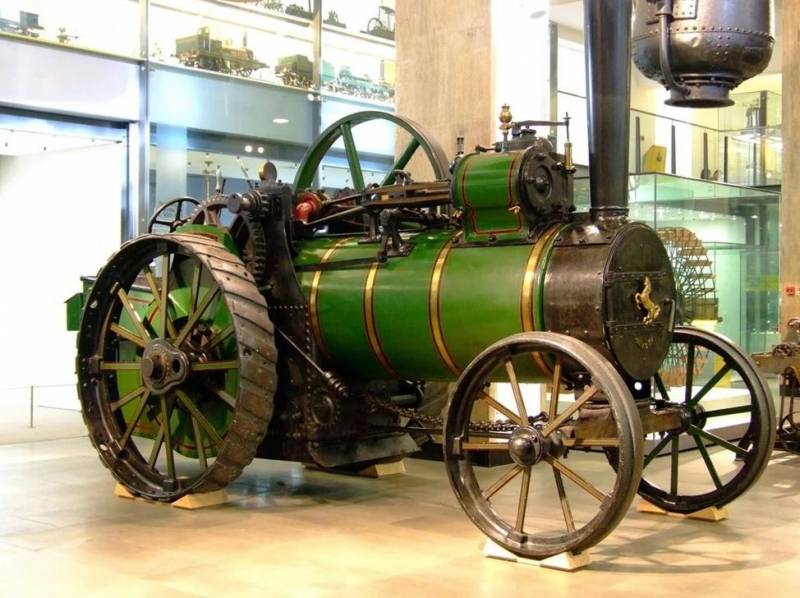 Steam Tractor Aveling & Porter Model 1871
At the same time, steam tractors have never been widely used in the army. At the beginning of the XNUMXth century, they were quickly replaced by new machines of a more efficient design, equipped with internal combustion engines, which steam engines could not compete with. Finally, this type of equipment, which was nevertheless used in the national economy in many countries, was achieved by the low fuel prices established after the end of World War II.

Author:
Yuferev Sergey
Photos used:
illustrations from the book "Tank". M .: Military publishing house of the Ministry of Defense of the USSR, 1947

Ctrl Enter
Noticed a mistake Highlight text and press. Ctrl + Enter
We are
Multi-axle rocket carriersGerman amphibious vehicles
21 comment
Information
Dear reader, to leave comments on the publication, you must to register.