Why the USA did not receive nuclear tanks 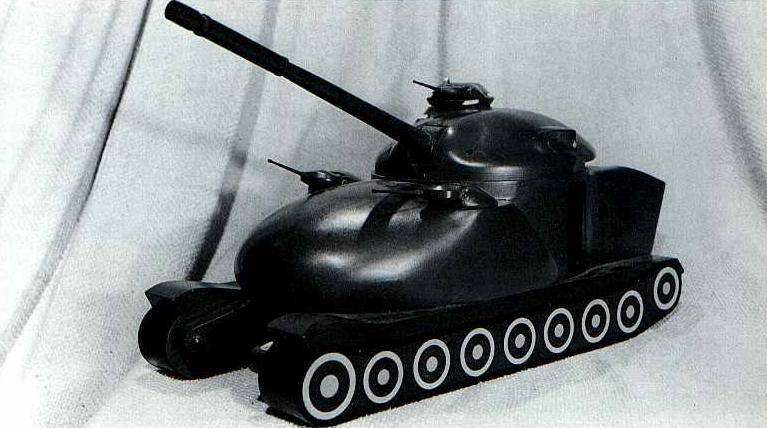 Layout tank TV-1. The characteristic nose of the vessel contained the reactor

In the fifties, against the backdrop of the rapid development of science and technology, the most daring ideas were proposed. So, in the USA, several projects of promising tanks with a nuclear reactor-based power plant were proposed and worked out at the theoretical level. Not a single such proposal has advanced beyond the concept, and the original idea was rejected - not without reason.

In 1953, the U.S. Army launched the ASTRON program, whose goal was to create a fundamentally new tank using the most modern and promising technologies. Leading scientific organizations and industrial enterprises began work, and soon a number of interesting projects appeared.

In May 1954, the next ASTRON conference was held. At it, Chrysler introduced its concept of a light-weight tank with powerful armor and weapons called the TV-1. A machine with a combat weight of 70 tons was supposed to have a body of characteristic shape, the bow of which was given over to the reactor. The task of the latter was the heating of atmospheric air for supply to a turbogenerator. Exhaust air was thrown out. A tank of this kind, at the suggestion of the engineers, carried a turret with a 105-mm cannon and several machine guns.

At the same conference, they showed materials on the TV-8 project. This tank was divided into two units: a large tower and a modest body size. The streamlined tower with a mass of 15 tons contained the fighting compartment, engine compartment, crew seats, weapons with ammunition, etc. Traction electric motors were placed in a 10-ton case with tracks. The armament included a rigidly mounted 90-mm T208 cannon and several machine guns.

For high mobility, a 25-ton tank needed an engine with a power of at least 300 hp. with electric transmission. Initially, an internal combustion engine was considered, then the possibility of using a gas turbine engine and other systems was studied. Finally, we came to the study of the use of a compact nuclear reactor with a steam turbine plant and an electric generator. 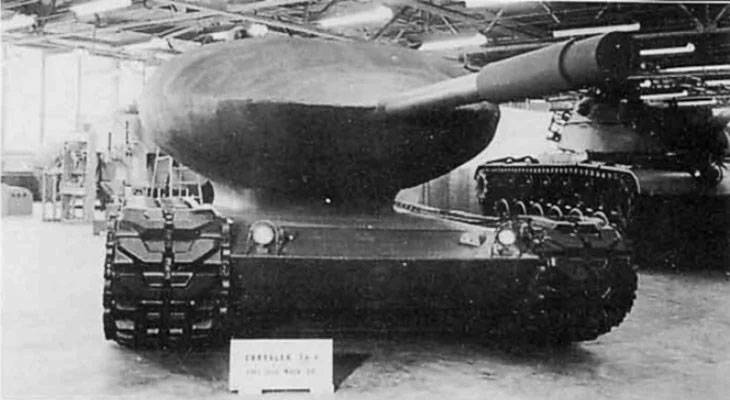 Another atomic tank project was presented in August 1955. The Ordnance Tank Automotive Command (OTAC) showed off a whole family of projects called Rex. Together with other concepts, it included the "atomic" R-32.

The 50-ton R-32 in its layout was like a TV-1. He had to have a front-engine layout of the hull and a “regular” tower. In the bow of the machine, it was proposed to place a compact reactor and a steam turbine with a generator. According to calculations, such a tank could cover at least 4 thousand miles of the track at a single refueling with nuclear fuel. At the same time, he needed developed biological protection, as well as shift crews - so as not to expose the tankers to excessive risks.

Projects of the OTAC ASTRON Rex line were not developed, although some of their decisions influenced the further development of American tank building. The R-32 nuclear tank, which remained at the concept level, went to the archive together with its family members.

Projects TV-1, TV-8 and R-32 considered the issue of a nuclear installation for a tank at the level of the general concept, but they were able to show its real potential. Despite significant structural differences, these tanks had a common list of pluses and minuses of the power plant. Therefore, from this point of view they can be considered together.

The main reason for the emergence of two concepts was the development of atomic technology. The fifties are characterized by increased attention to the latest achievements of science and technology, including and in the context of their implementation in various fields. So, it was proposed to use nuclear reactors on airplanes, trains, cars, and also tanks. The mere fact of using the latest technologies was optimistic and allowed us to count on a great future.

The layout of the tank TV-8 with a "conventional" power plant. The engine and other units are located in the stern of the tower, above the breech of the gun
A nuclear power plant for a tank could have several advantages. First of all, with similar dimensions, it could be much more powerful than the usual diesel. A plus became more compact and simple in the layout of the electric transmission.

The nuclear reactor was extremely fuel efficient. At one gas station, with a comparatively small amount of fuel, the tank could travel thousands of miles, fulfilling combat missions. Also, the nuclear installation provided a serious reserve of power for further modernization of equipment. High economy also made it possible to rebuild army logistics, reducing the number of tankers needed for fuel delivery. Thus, the advantages over traditional engines were obvious.

Project development quickly showed that benefits are achieved at the cost of many problems. In combination with the tank’s own design flaws, this made new projects unsuitable for further development and virtually useless.

First of all, any nuclear tank was extremely complex and expensive. In terms of manufacturability, ease of use and cost of a life cycle, any armored vehicle with a reactor was losing its usual appearance. This was clearly shown in different versions of projects from Chrysler and OTAC.

Already at the stage of preliminary elaboration of the concepts, it became clear that to ensure the safety of the crew, the tank needed developed biological protection. She, in turn, needed considerable volumes inside the engine compartment and next to it. This led to various restrictions and seriously complicated the design of the tank as a whole. In particular, with increasing power and radiation from the reactor, a larger and heavier protection was required, which led to an increase in the mass of the structure and the need for a new increase in power.

The layout of the tank R-32
Serious problems were to be expected during operation. A nuclear tank could do without a fuel truck for transporting fuel, but its fuel required special equipment and special safety measures. Almost any tank repair turned into a complicated procedure in the conditions of a specially prepared site. In addition, the reactor did not solve the problem of the supply of lubricants, ammunition or provisions for the crew.

In a battlefield, an atomic tank is not only a highly efficient combat vehicle, but also an additional dangerous factor. A machine with a reactor actually becomes a self-propelled dirty bomb. Its defeat with damage to the design of the reactor leads to the release of hazardous materials into the environment with understandable risks for their and other soldiers.

The TV-1 project from Chrysler stands out against this background. It provided for the use of an open-cycle power plant with the exhaust of exhaust air to the outside. Thus, the contamination of the area became a regular feature of the tank. This fact alone put an end to future exploitation.

The massive construction of atomic tanks with the desired characteristics required too many expenses of various kinds - both on the equipment itself and on the infrastructure for its operation. At the same time, costs would remain high even taking into account possible savings on a large series.

Already at the stage of preliminary study of the concepts, it became clear that a tank with a nuclear power plant does not have real prospects. Such a machine can show advantages in certain technical and operational characteristics, but otherwise it turns out to be a big problem and is particularly dangerous throughout the life cycle.

Army Specialists reviewed the Chrysler TV-1 and TV-8 projects, as well as the OTAC Rex R-32, and did not approve their further development. However, the concept itself was not immediately abandoned. At the end of the fifties, the issue of installing the reactor on the chassis of a serial tank was studied, but it did not reach the experiments. Moreover, after that, the military prudently abandoned the very concept of an atomic tank. Real combat vehicles suitable for operation in the army and in the war, decided to do with the more familiar power plants.

Ctrl Enter
Noticed a mistake Highlight text and press. Ctrl + Enter
We are
"Abrams" without "dill" and embellishmentAmerican atomic tank projects
17 comments
Information
Dear reader, to leave comments on the publication, you must to register.