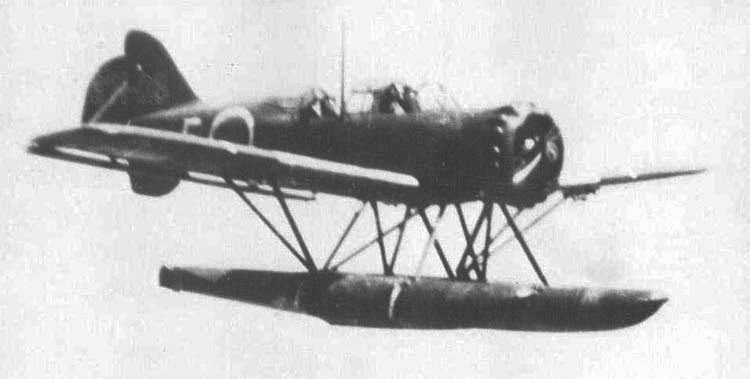 I must say right away: do not judge by appearance! The plane is both wonderful and noteworthy. And in a way - and unique.


Not only is it an underwater marine plane aviation Japan, it is also his honor to be the only plane to bomb US territory during World War II.

Yes, there were balloons with explosives, there were. But a strike on the USA with the help of aviation - this was only two times in total, with one crew. 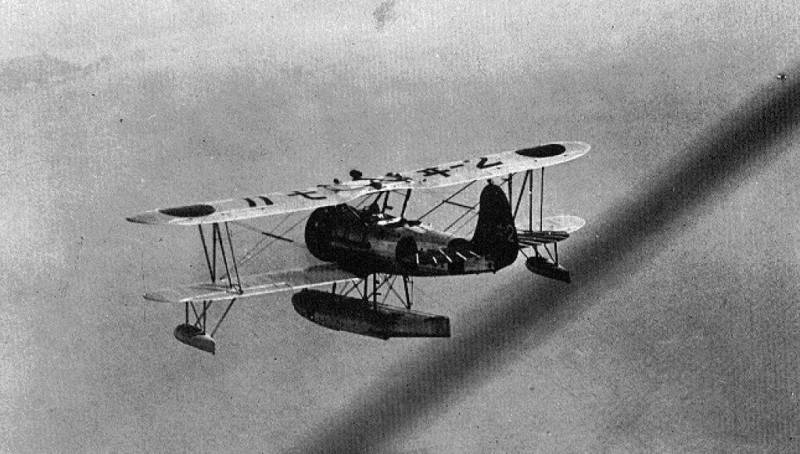 Seaplane E14Y1 appeared as part of a program to improve underwater fleet Japan 1937. According to this program, new, more modern aircraft were to appear on the new and old submarine cruisers of the imperial fleet. 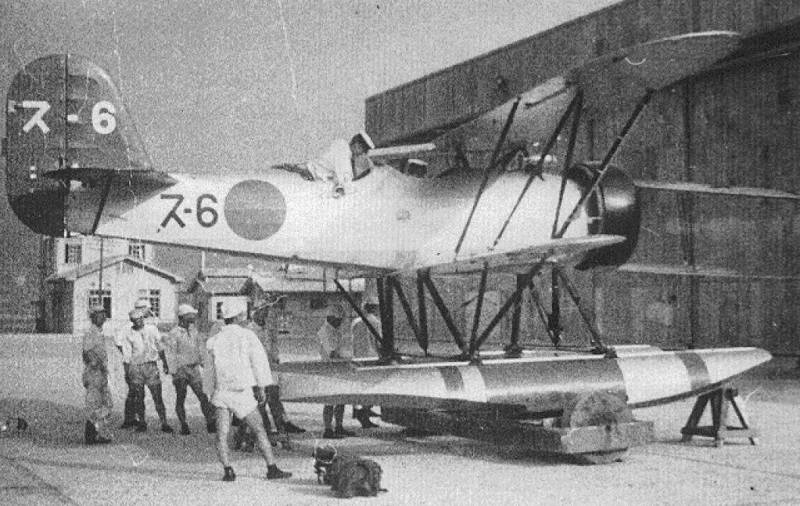 Let no one be embarrassed that the planes were created by not-so-well-known companies, in fact, the designers of both companies were more than competent people who could not save such a task. To build a hydroplane for use in a submarine is even more difficult than to design and build a deck aircraft from scratch.

Submarine hangar - this is not the inner deck of an aircraft carrier, as it were. But Mitsuo Yamada did the job. And the task was, I repeat, not the easiest: to build a monoplane, which should not only have good flying qualities, but also fit into the hangar of a submarine!

Yamada chose a low wing monoplane design with two supporting floats. When placing the machine in a limited-sized hangar, the wing consoles folded along the fuselage, and the stabilizer turned down. 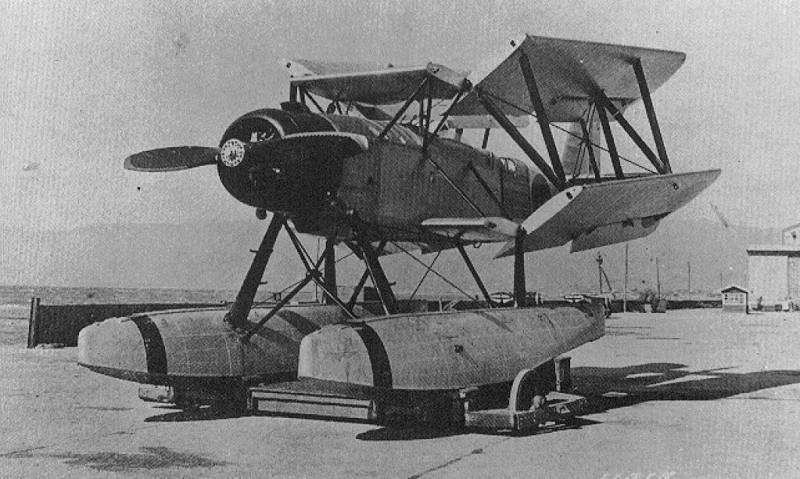 At the end of 1938, the assembly of the first two prototypes of the seaplane was completed, which received the designation “Marine experimental boat seaplane E14Y1”, and in early 1939 the flight tests of seaplanes began.

The seaplane was nothing new at that time, it was a mixed-design aircraft with a 9-cylinder Hitachi GK2 Tempu 12 engine, air-cooled, equipped with a wooden two-blade propeller of a constant pitch.

The armament was minimal: one 7,7-mm machine gun mounted on a pivot mount in the observer's cabin for defense of the rear hemisphere. And two 30 kg bombs that could be hung under the wings.

But this is a scout, so in principle, with weapons everything is clear.

However, the tests revealed a very unpleasant thing. The plane turned out to be heavy, the mass exceeded the calculated one by 180 kg. This, of course, entailed a decrease in the payload, that is, the fuel supply.

In general, it turned out somehow frivolously, the plane could take only about 200 liters of gasoline, which ensured a flight range of 480 km. The Fleet’s General Staff considered that this was simply not serious, and handed over the seaplane to Watanabe Tekkosho for revision, as it had more experience working with this type of aircraft.

At Watanabe Tekkosho, miracles did not happen, but they reduced weight by 80 kg. Not God knows what, but already something, as they say.

In general, the plane flew, and flew well. He was not capricious, easy to manage, coped with the wave, and as a whole evoked only positive emotions from the testers.

And in December 1940, after the design changes were made, the seaplane was expectedly adopted under the designation E14Y1. 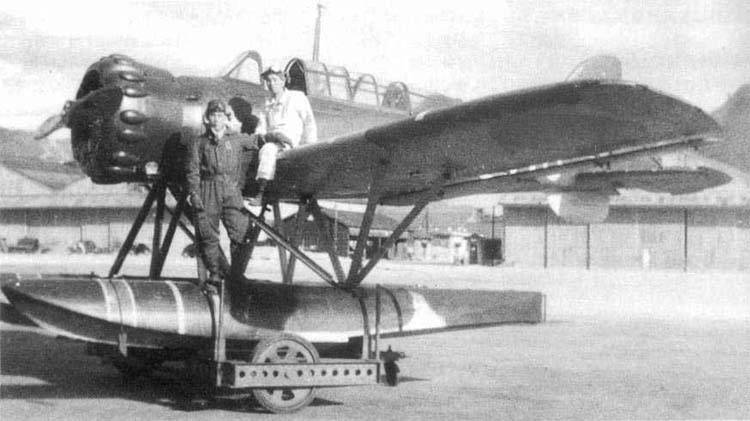 Although the E14Y1 was intended for arming submarines, the order was increased and the plane went to coastal military bases, where it was also used to patrol the coast of the Japanese islands, taking off from the bases of the Japanese naval aircraft.

On the submarine, the E14Y1 was deployed folded in a waterproof oval section hangar 1,4 m high, 2,4 m wide and 8,5 m long, which was located on the deck before the conning tower.

For storage in the hangar of the submarine, the aircraft was thoroughly disassembled. The floats were undocked from the wing and the fuselage, the wings were also undocked and laid along the fuselage. The tail unit was folding, the stabilizer with elevator turned up, and part of the keel down.

However, the assembly of the aircraft did not take much time. It took 15 minutes to prepare the plane for launch. And as the crew improved their skills, the assembly and installation time on the catapult was reduced to six and a half minutes.

The aircraft started with the help of a pneumatic catapult, working from the pneumatic system of the submarine, and after landing, the aircraft was lifted aboard by a crane, dismantled and sent to the hangar. 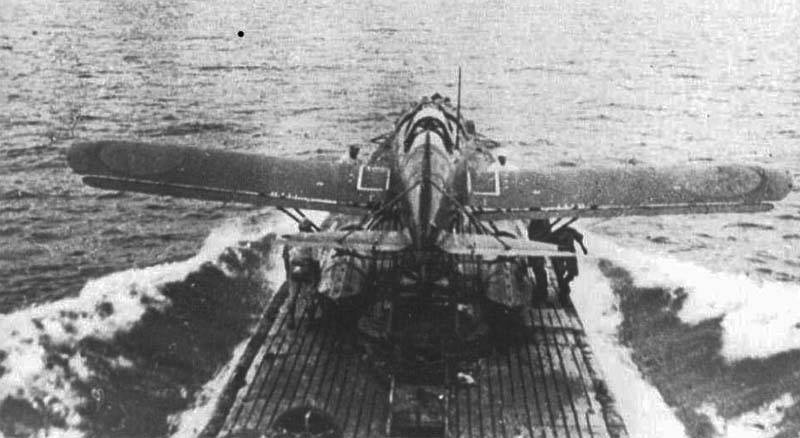 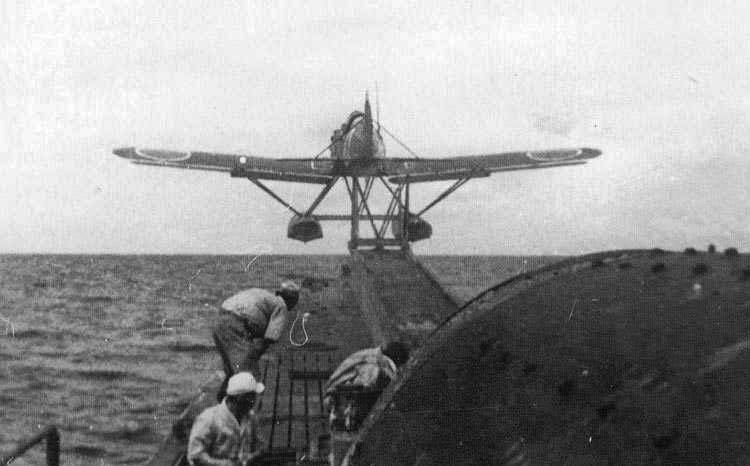 14 minutes passed from the moment the submarine surfaced to the start of the E1Y15 from the pneumatic catapult. Later, after technical staff gained experience, this time was reduced to 6 minutes 23 seconds. After the flight was completed, the aircraft landed near the boat, boarded a crane, disassembled and placed in the hangar. 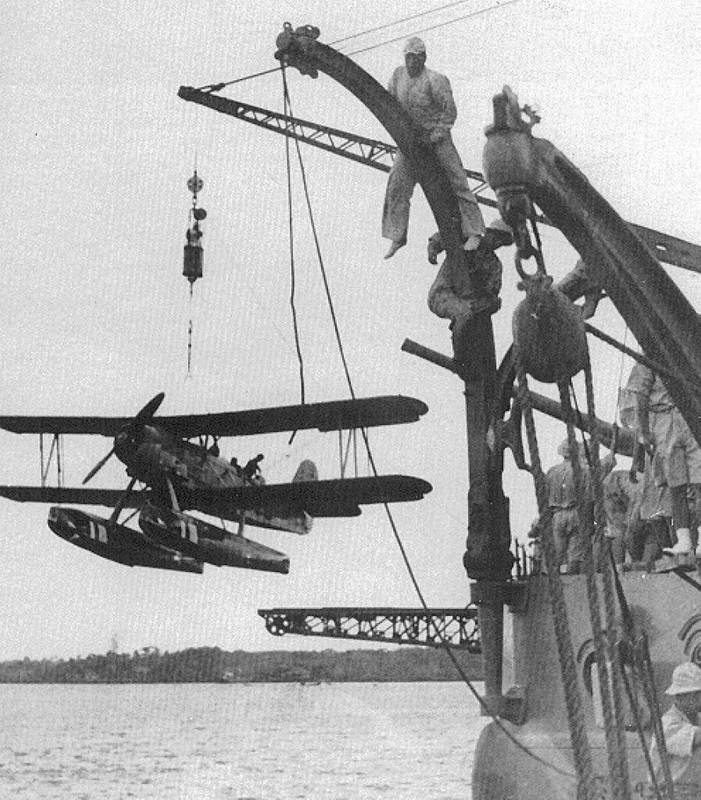 The seaplane E14Y1 made its first combat mission on reconnaissance at Pearl Harbor base on December 17, 1941. The aim of the flight was to photograph the results of the attack on deck aviation by Admiral Nagumo on December 7, 1941.

The seaplane launched from the catapult of the submarine I-7 and disappeared.

The next flight of the E14Y1 took place on January 1, 1942 in the Oahu area. This time the flight was successful, and the car returned aboard the boat. By the way, it was noted that the Americans could not detect this small car with a radar. And the E14Y1 could calmly do its job. 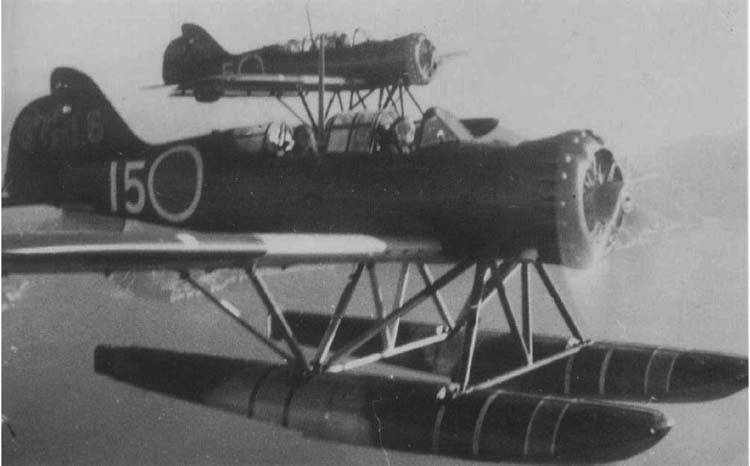 The rich intelligence information about the location of the U.S. Navy, collected by the I-25 boat using the E14Y1 seaplane, was later used by the Japanese naval command in planning underwater attacks.

In general, the work of the E14Y1 scout was so successful that the Japanese fleet-inspired command formed the 8th submarine squadron under the command of Admiral Sazaki specifically for operations in the waters of Australia and New Zealand.

The squadron included boats I-21, I-22, I-24, I-27 and I-29. True, the role of the reconnaissance was to play the I-21 boat with a seaplane on board, and all the rest had on board small double submarines. 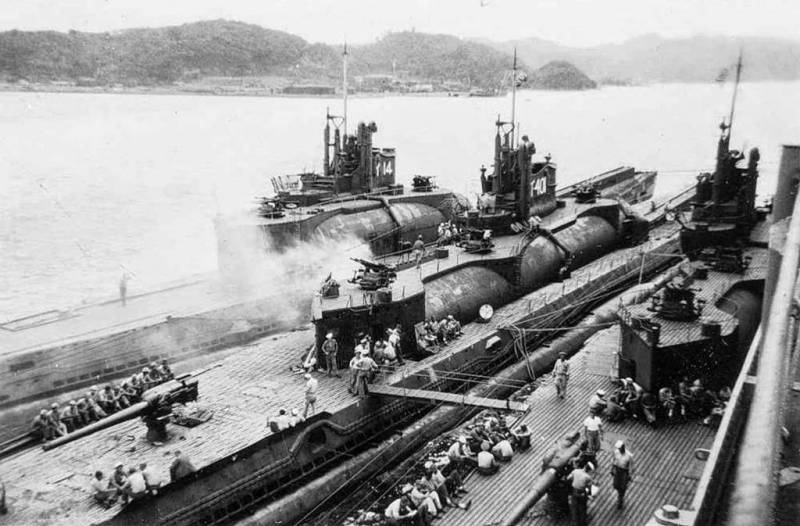 At the end of May 1942, the seaplane E14Y1 was again over Sydney Harbor, and again the detection system splashed it. E14Y1 calmly photographed the harbor and began to search for ships with the aim of pointing small submarines on them. This is not to say that the plane and boats acted successfully, because the Americans sunk all four small boats without suffering any losses.

Meanwhile, the 4th submarine squadron was operating in the Indian Ocean, which included submarines I-10 and I-30 with seaplanes on board. On May 2, 1942, E14Y1 with I-10 carried out reconnaissance flight over Durban, and a few days later - over Port Elizabeth. Meanwhile, E14Y1 from I-30 performed similar flights over the ports of Zanzibar, Aden, Djibouti and French Somalia.

But the greatest success can be considered the actions of boats in Madagascar, which the Allies began to "liberate" from the protectorate of France, more precisely, Vichy. E14Y1 examined the entire coast of Madagascar and, according to their data, all the same small submarines that sank a tanker in the port harbor of Tuamasin and treated two battleships with the battleship Ramilles, which had to be dragged to Durban for repairs, went into action. 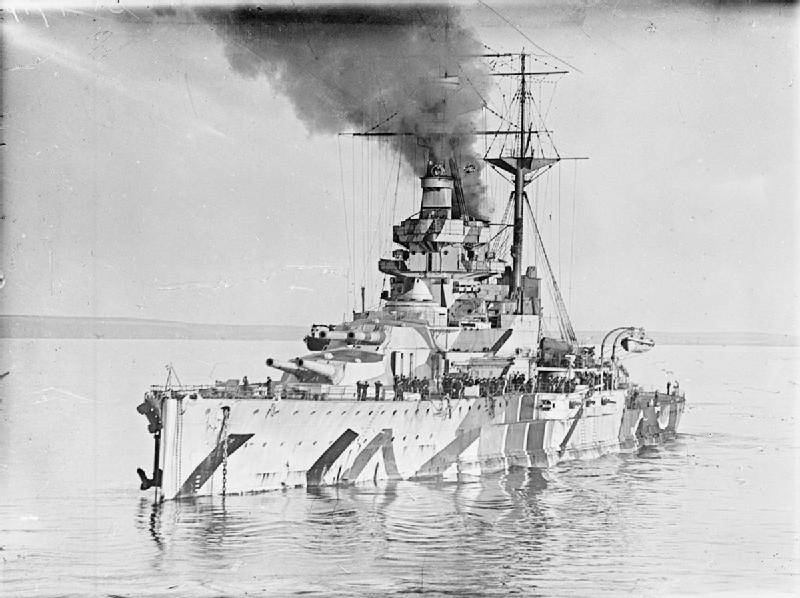 But, of course, the most epic operation was the bombing of US territory.

On August 15, 1942, I-25, under the command of Captain Lieutenant Meiji Tagami, with the E14Y1 on board, left the port of Yokosuku and by early September arrived at the US West Coast near Cape Blanco, Oregon.

The task of the crew of E14Y1, consisting of a pilot Fujita and observer Okuda, was to drop 76-kg incendiary bombs into forest areas of Oregon. 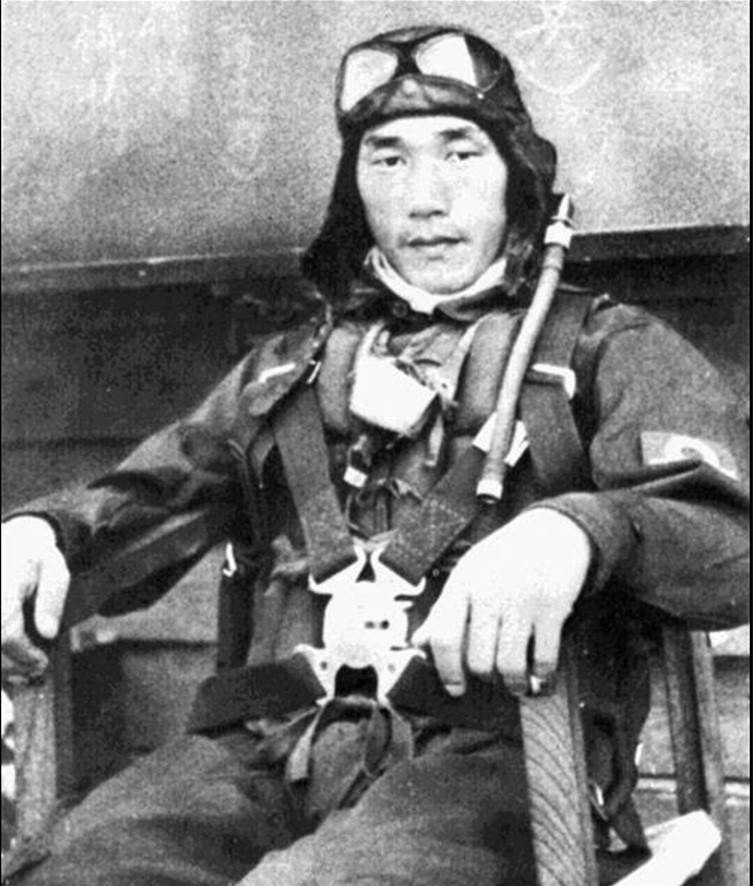 Pilot Nabuo Fujita
Incendiary bombs were filled with a special mixture, which, when ignited, gave a temperature of more than 1500 degrees over an area of ​​100 square meters. For four days, bad weather did not allow the flight. Only on September 9 the sky brightened, and Fujita with his partner began to prepare for take-off. The submarine was against the wind, and the catapult lifted a seaplane into the air, which headed for Cape Blanco.

The plane deepened from the coastline by 11-15 km, focusing on Mount Mount Emily, where the crew dropped bombs on the forest. 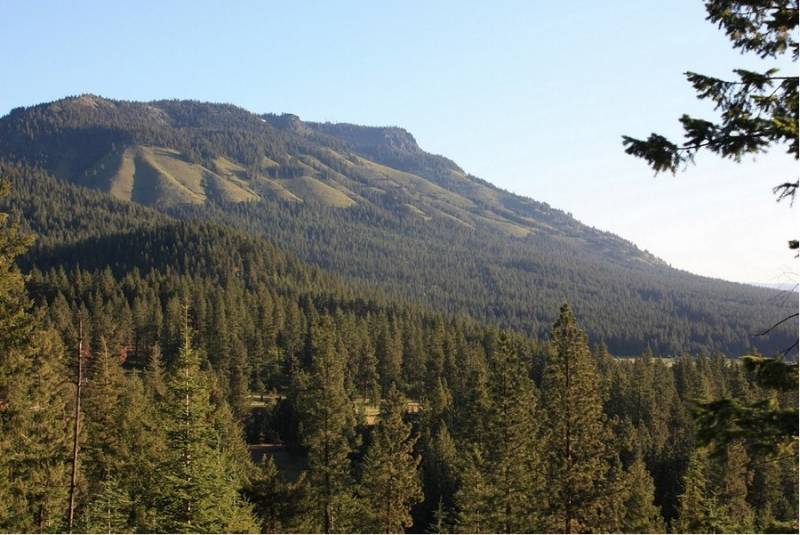 On the way back, Japanese pilots discovered two transport vessels that had to be circumvented to avoid detection. Commander Tagami decided to attack the ships, but the boat was discovered by a coastal defense patrol plane and now the Japanese had to flee inland.

They decided to carry out the next flight on the night of September 29. This time, the area east of Port Or Ford was attacked. Fujita normally flew over and dropped the “lighters,” but when he returned, the crew hardly found the location of his submarine. After a dramatic search for the boat on the oil trail, the pilots managed to find the submarine when the last drops of fuel remained in the tanks.

These two raids caused very little damage. The fact is that before these events in Oregon, torrential rains fell for two weeks, and the forests simply did not want to burn.

But some historical Fujitsa flights were of importance, since they were the only bombing of US territory by an enemy combat aircraft during the entire Second World War.

And if you consider that on the way back on October 4, 1942, the American tanker Camden torpedoed, and on October 25 the Lam Dohery, we can safely say that the operation was successful.

On September 3, 1943, I-25 ended in the Solomon Islands when it was sunk by an American warship. Observer Okuda died in October 1944 in the Formosa area during an attack on an American aircraft carrier. The only participant in the attack on the US coast that survived the war was the pilot of Fujita.

In general, the career of the E14Y1 ended approximately the same as that of many deck scouts: they were simply replaced by radars. And the use of reconnaissance seaplanes by submarines has generally become impossible, since the risk of detection has multiplied. 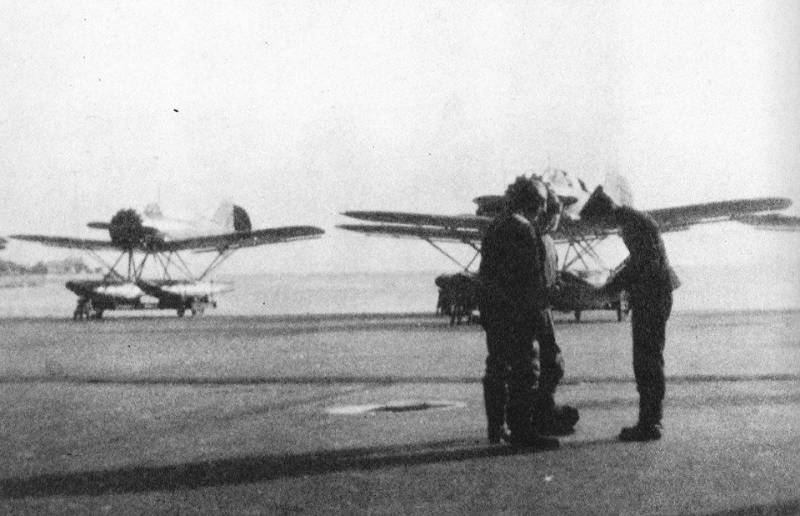 So it is logical that in 1943 the production of E14Y1 was discontinued. A total of 138 aircraft were produced.